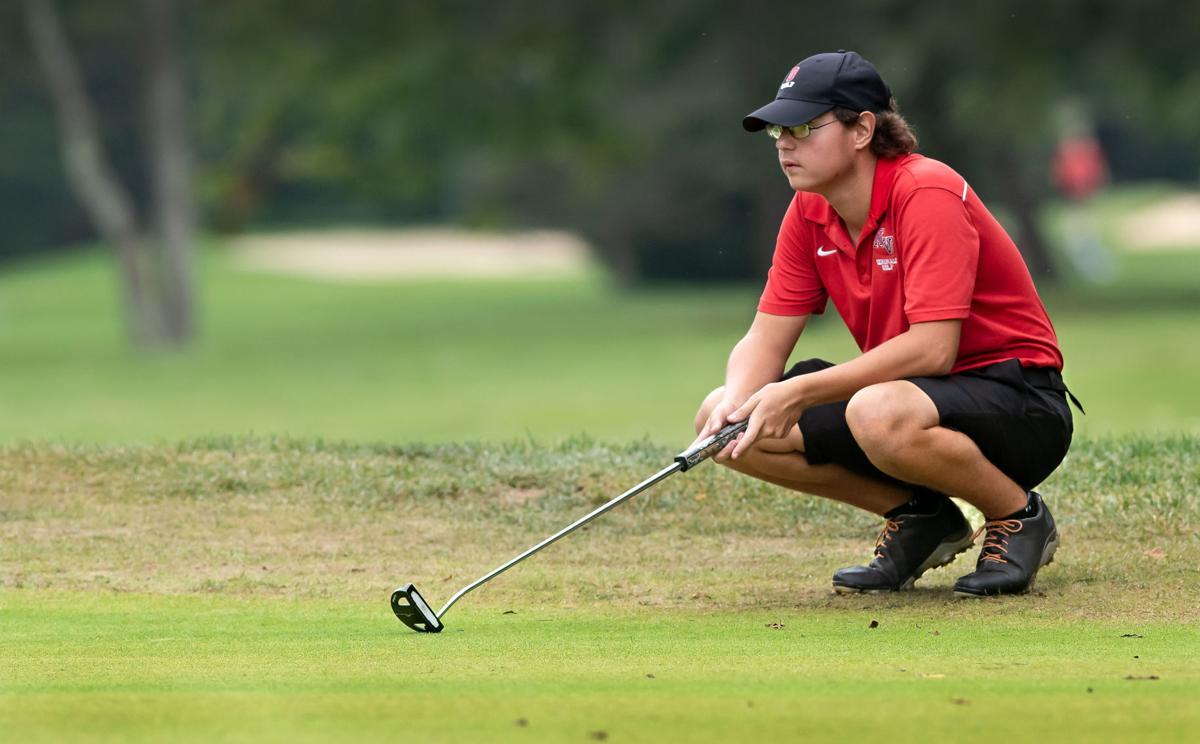 Mt. View’s Andrew Wymer lines up a shot during the Bull Run District tournament on Sept. 20. The Generals are one of eight teams in the Class 2 state golf tournament Tuesday at Olde Mill Golf Resort in Laurel Fork. 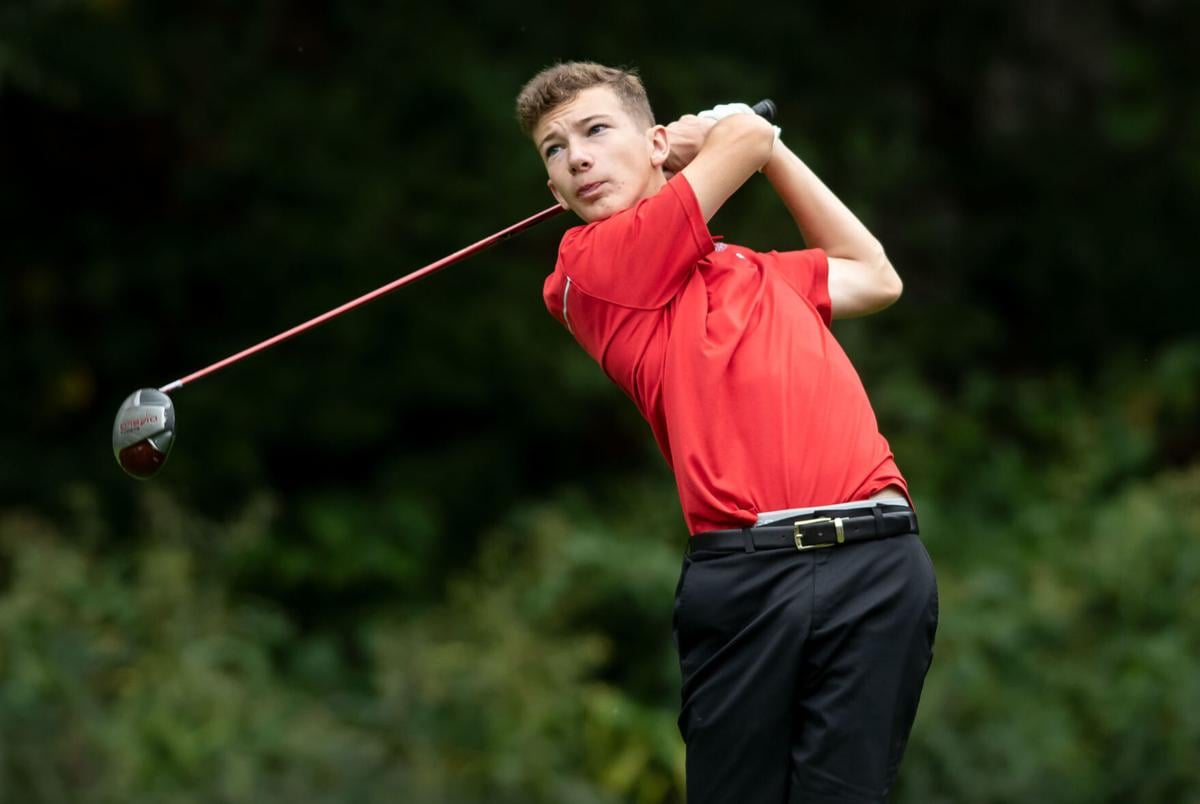 Mountain View’s Henry Bull tees off during the Bull Run District Tournament on Sept. 20 at Bryce Resort. The Generals will play in the Class 2 state golf tournament Tuesday at Olde Mill Golf Resort in Laurel Fork. 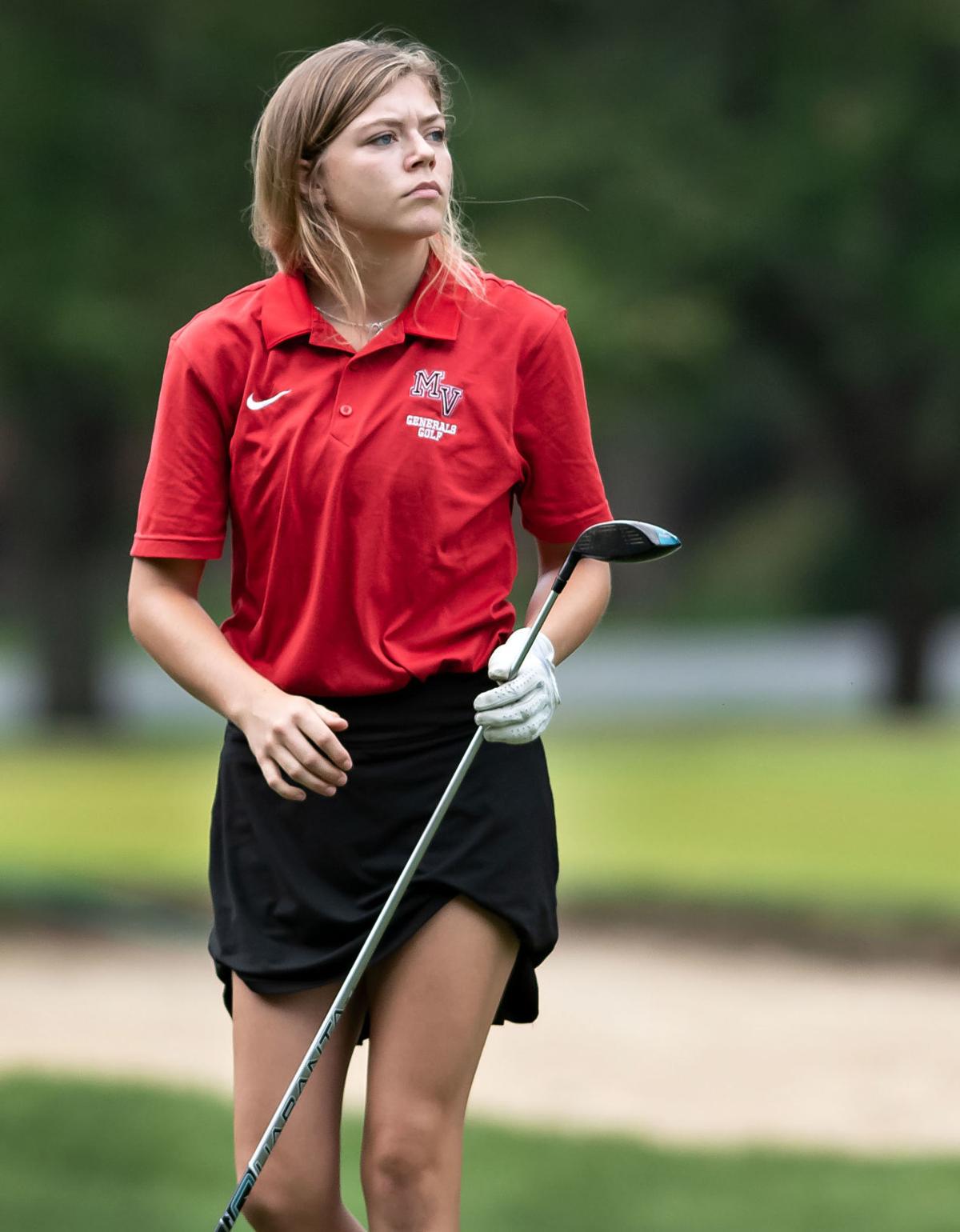 Mountain View’s Emily Racer looks for her ball after dropping a chip shot onto the green during the Bull Run District Golf Tournament on Sept. 20 at Bryce Resort. The Generals will play in the Class 2 state golf tournament Tuesday at Olde Mill Golf Resort in Laurel Fork.

Mt. View’s Andrew Wymer lines up a shot during the Bull Run District tournament on Sept. 20. The Generals are one of eight teams in the Class 2 state golf tournament Tuesday at Olde Mill Golf Resort in Laurel Fork.

Mountain View’s Henry Bull tees off during the Bull Run District Tournament on Sept. 20 at Bryce Resort. The Generals will play in the Class 2 state golf tournament Tuesday at Olde Mill Golf Resort in Laurel Fork.

Mountain View’s Emily Racer looks for her ball after dropping a chip shot onto the green during the Bull Run District Golf Tournament on Sept. 20 at Bryce Resort. The Generals will play in the Class 2 state golf tournament Tuesday at Olde Mill Golf Resort in Laurel Fork.

NEW MARKET — Mountain View’s golf program is making strides toward getting back to where it used to be.

The Generals are playing in the Class 2 state tournament Tuesday held at Olde Mill Golf resort in Laurel Fork. It’s the Generals first state tournament appearance since 2017. Mountain View has had a strong golf program off and on over the last 20-plus years, including finishing as state runner-up in 2013.

Mountain View coach Brady Kibler said before a practice last week the key to his team this season has been being consistent.

“That’s one thing that I’ve been trying to get out of our top four is consistency, and I wouldn’t even just say the top four,” Kibler said. “Our four scorers that are going to score that day has to be consistently in that low-mid 40’s (for 9 holes).”

The Generals have been led all season by the trio of senior Henry Bull, senior Emily Racer and junior Andrew Wymer. However, Kibler said having a consistent fourth scorer has been the difference between last season and this season.

Junior Braxton Biller, junior Joey McNamara and senior Jason Dinges fill out the bottom of the top six and have taken turns being that fourth scorer for the Generals.

“Last year I think we lacked it,” Kibler said. “That’s why we didn’t (advance to regionals) because we couldn’t consistently find a fourth scorer. We were relying on one, two and three to play their best golf and four to have an OK day. Early on it wasn’t looking like it was to trend that way. It was looking like we were going to repeat last year. About midway through the year (that changed). I didn’t know who was going to be our fourth scorer, was it going to be our six, could be our five, could be our four? It could be any of them.”

Last season the Generals finished tied for first in the Bull Run District in the regular season and then had a disappointing day in the district tourney. They finished third and didn’t qualify for regionals.

With basically the same team back this season the Generals have been motivated to advance to the state tournament this year.

“I think it has motivated us a lot because we didn’t do as well as we thought we were going to do,” Racer said. “So I think going to states has motivated us more to all to do well. ...We want to try and get better so we are more prepared to go to states.”

Bull said another key to the team’s success is that the players all get along and have played together for a number of years.

“We have a good relationship as a team, a very strong chemistry,” Bull said. “I don’t think there’s anyone new. These six that we have, we’ve played together for three years now, which is really nice.”

The Generals have built a rivalry with Madison County, who won the Region 2B Championships on Sept. 27. Madison County only led Mountain View by one point until the Mountaineers No. 6 golfer posted an 85 to give his team an 11-stroke victory.

Kibler said being able to compete with a strong Madison County squad was good and hopefully a confidence builder for his team.

“It is cool to push a team like that,” Kibler said. “They got a special group that doesn’t come along very often. So for us to be right there, even getting a crack at them is nice to see.”

The Generals don’t know a lot about the Olde Mill Golf Resort course, but perhaps the one that has the best inside knowledge to it is Wymer. His father, Scott, played there for the Generals in the state tournament in his junior season.

Andrew Wymer said his dad has told him a little bit about the course, which could be helpful.

“From what I know the yards look to be longer,” Andrew Wymer said. “There’s a lot of water. It’s a little bit challenging, but it’s going to be a fun course.”

The only member of the team with any state experience is Racer. She said that she played in the Florida state girls tournament as a freshman at a school in Florida.

Andrew Wymer said it really hasn’t sunk in that the Generals are one of the top eight teams in the state, but they are just trying to stay focused and do the best they can Tuesday.

“We’ve been having fun, just practicing here and there,” Andrew Wymer said. “We’re just taking it like every other week, same things, same goal — just try to win.”

Bull, Dinges, Racer, Nathan Poole and Daniel Walker are all seniors on the golf squad this season. Bull said it’s special advancing to states in his senior year.

“It’s really nice being a senior,” Bull said. “And the one year that I am a senior and I got to states that year, so that’s nice. It’s nice to be able to do that my senior year.”

Kibler said they were going to leave early Monday morning and play a practice round at the course around 1:30 p.m. on Monday.

Even though they have three seniors in the top six, Kibler said he has some young players coming up and he feels like the program will continue to be strong next season.

Kibler said it’s good for the program to have success and he knows that the players have been gaining attention at school.

“The success we’re having now with this core group is going to help, and I don’t think they realize that,” he said. “And I’m going to try to make a big deal of it the last couple practices and say hey this is what you did for this program. You all kind of put us back on the map. Word is getting out and people are starting to follow us a lot closer. That’s exciting, fun, to build a community around us. They’re doing big things and that’s something to be proud of regardless if we finish eighth or first. It doesn’t matter we’re back on the map.”