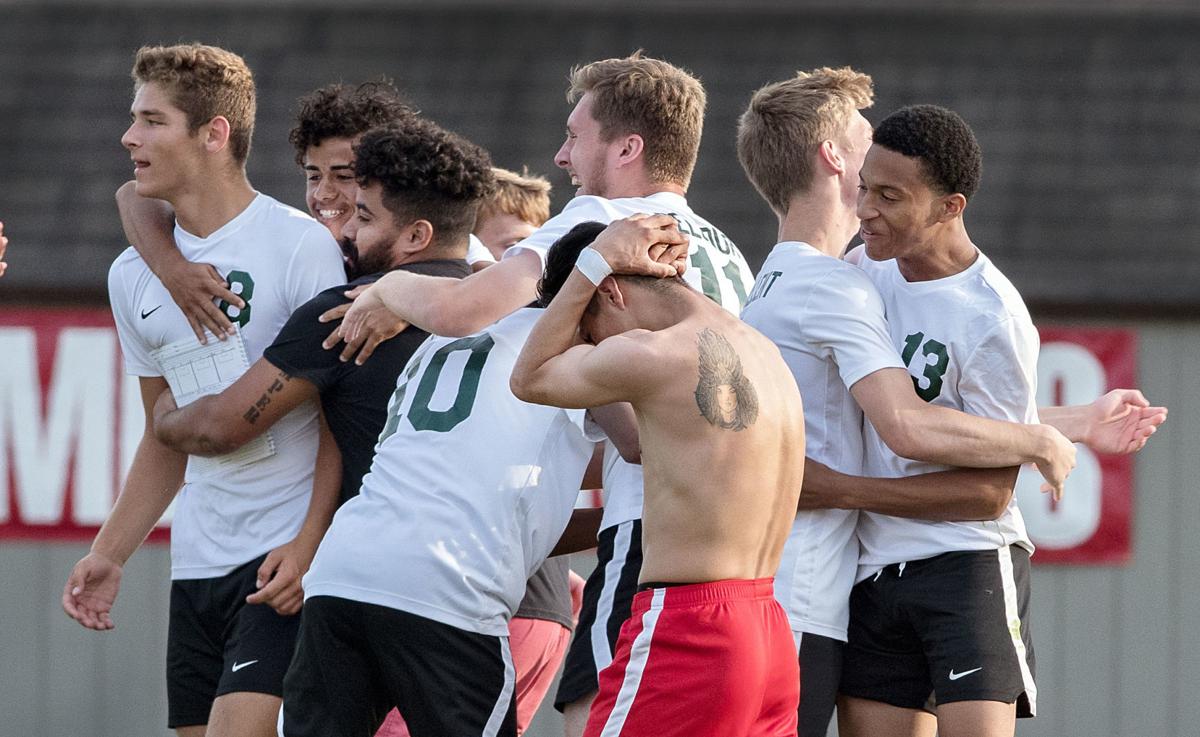 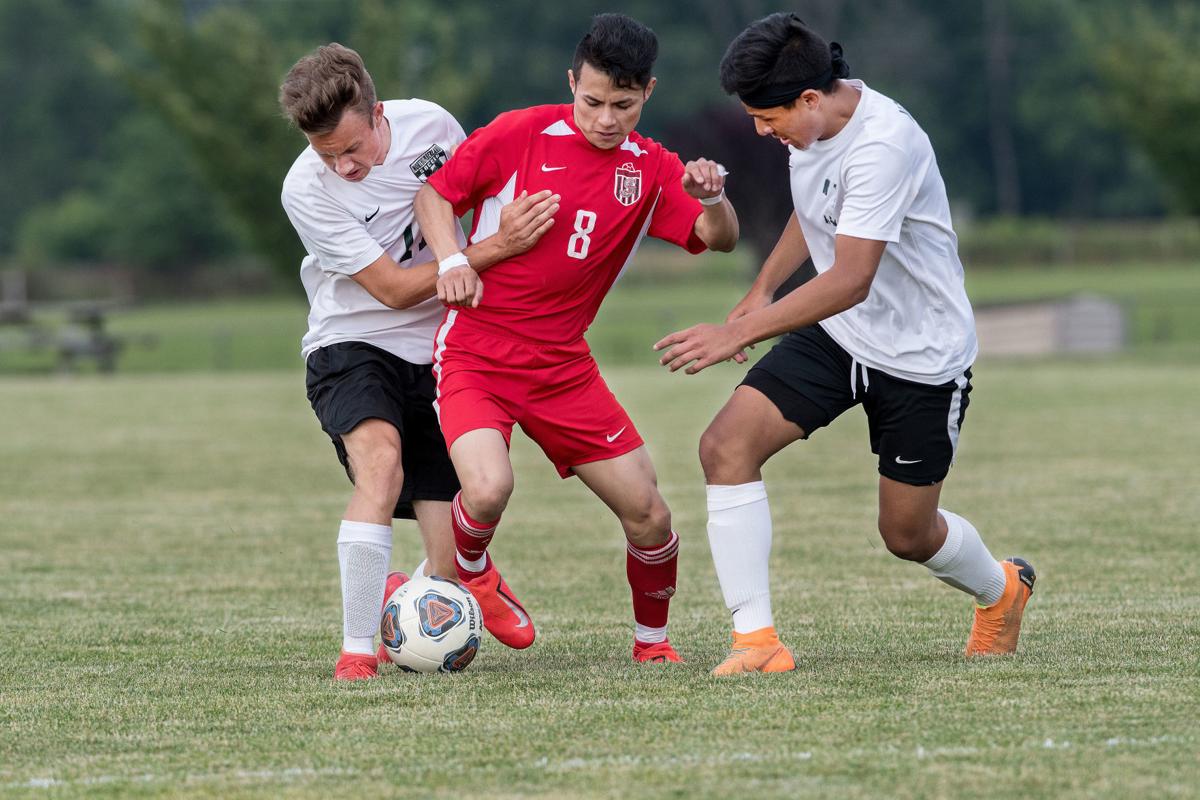 Above, Stonewall’s Angel Arteaga Loorenzo is sandwiched between Northumberland’s Caleb Tarmon, left, and Luis Verdugo, right. Below, Stonewall’s Alan Arnesen, left, and Udreka Claude, right, go up to head the ball in a scoring attempt. 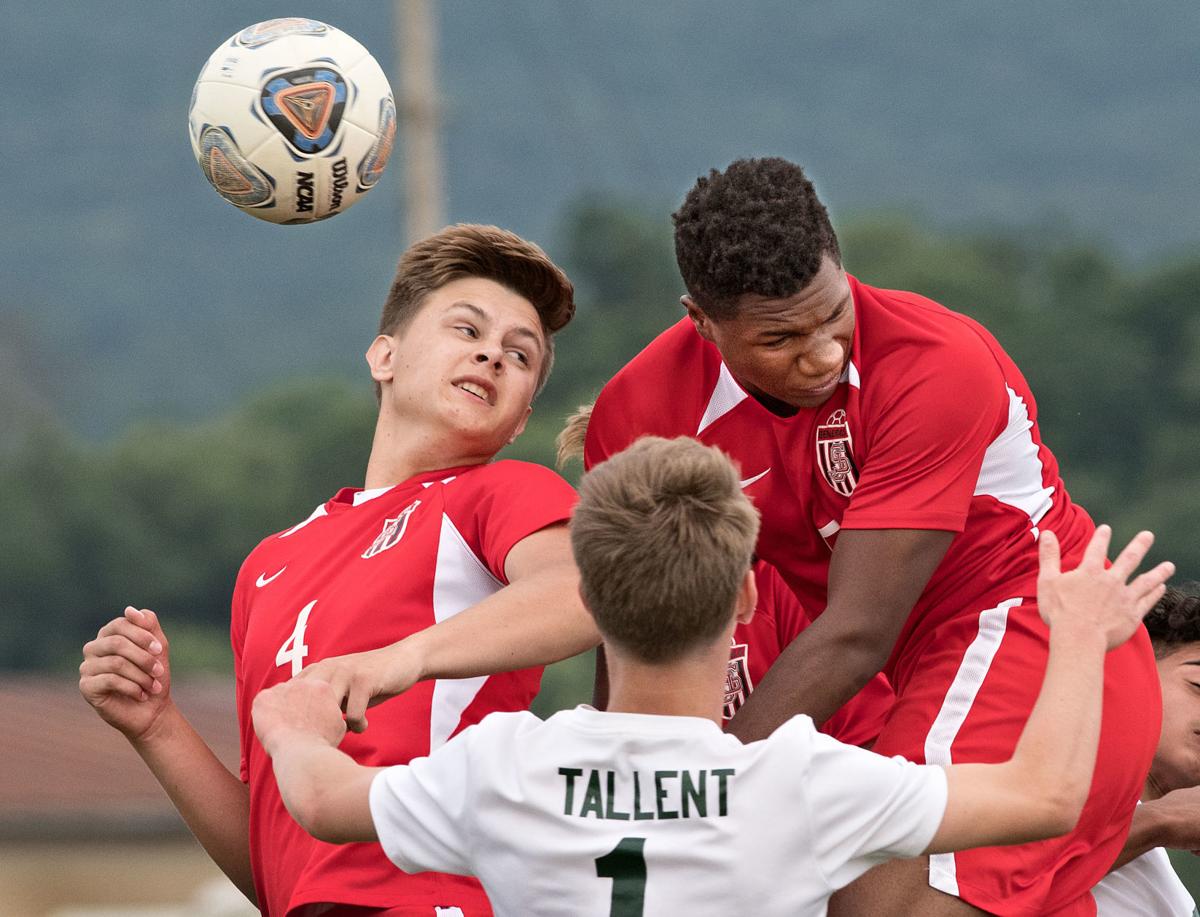 Stonewall’s Alan Arnesen, left, and Udreka Claude, right, go up to head the ball in a scoring attempt.

Above, Stonewall’s Angel Arteaga Loorenzo is sandwiched between Northumberland’s Caleb Tarmon, left, and Luis Verdugo, right. Below, Stonewall’s Alan Arnesen, left, and Udreka Claude, right, go up to head the ball in a scoring attempt.

Stonewall’s Alan Arnesen, left, and Udreka Claude, right, go up to head the ball in a scoring attempt.

QUICKSBURG – For the second year in a row Stonewall Jackson’s boys soccer team made it to the Class 1 state quarterfinals, and for the second time in a row they lost a heartbreaker.

Northumberland scored the game’s only goal with nine minutes left for a 1-0 victory over the Generals on Tuesday. Last year, the Generals lost on penalty kicks in the state quarterfinals.

“I think we dominated the game,” Stonewall Jackson coach Matt Burgwald said. “I think that we had some calls that did not go our way that I thought were pretty obvious.”

The game was stopped several times due to the physical nature of the play and things becoming rougher than they were supposed to be.

Burgwald said that he was proud of the way his players kept their composure and played with class.

“I felt today was more about who was physical rather than technical,” he said. “I’ve taught our players to play soccer. And whenever we’ve come out and been physical, we were carded rather heavily. So it was a bit of a mixed signal, I think today. I think that our players played very well. I felt that we played very clean.”

The Generals (13-8) dominated possession and total shots in the game. Stonewall Jackson had plenty of chances in both halves but couldn’t get the ball in the back of the net.

With about nine minutes left in the game, Northumberland’s Bay Wiggins on a breakaway sent the ball past Stonewall Jackson sophomore goalkeeper Christian Hess for the 1-0 lead.

“I was kind of ready for it,” Hess said. “It kind of bounced weird, I guess, and it just got over my hand. ...I was prepared for it, but I just missed the save.”

The Generals won their second regional title in a row last week and Burgwald said the players should be proud of everything they accomplished this season.

“I think Stonewall should be proud to have represented the county as long as we have now – two years in a row,” Burgwald said. “I’m looking forward to the young players that we have coming into the program. I’m thankful for a great (junior varsity) and assistant (varsity) coach in Elmer Lopez. We’ve continued to push this program further and further.”

Burgwald said it was also exciting to have such a big crowd for the boys game and the Stonewall Jackson girls soccer game, which followed the boys Tuesday night. Stonewall Jackson’s girls team beat Northumberland, 4-1, in the Class 1 state quarterfinals.

“How cool is it that we’re here to watch the girls in their first state game?” Burgwald said. “That’s amazing – to have two teams from one school make it this far. I’m crazy proud of the girls for their accomplishment.”

The Generals have a young squad this season with only five seniors. Hess said he thinks the team can build on their success this season and continue to get better for future years.

“I’m very happy with this season overall,” Hess said. “The players have improved, I’ve improved. I’m looking forward to next year with all the upcoming players, with all of us playing together. I think it will be fun next year.”