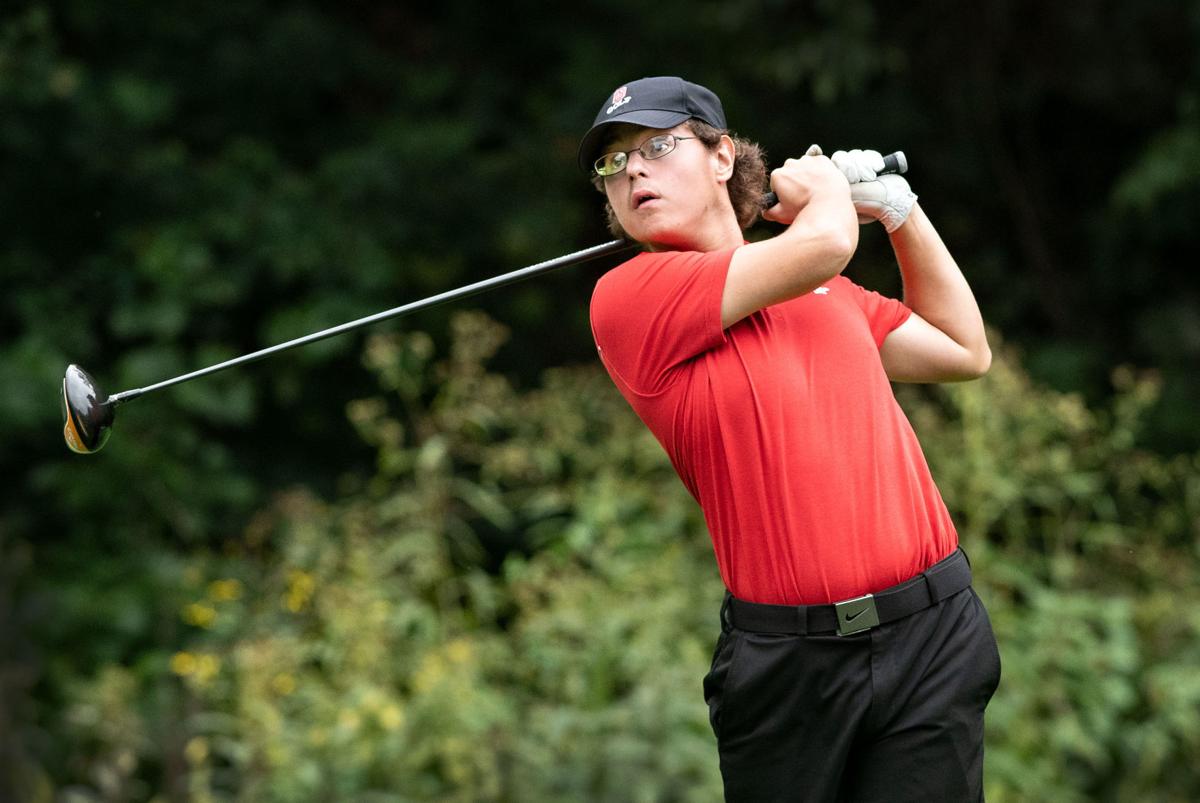 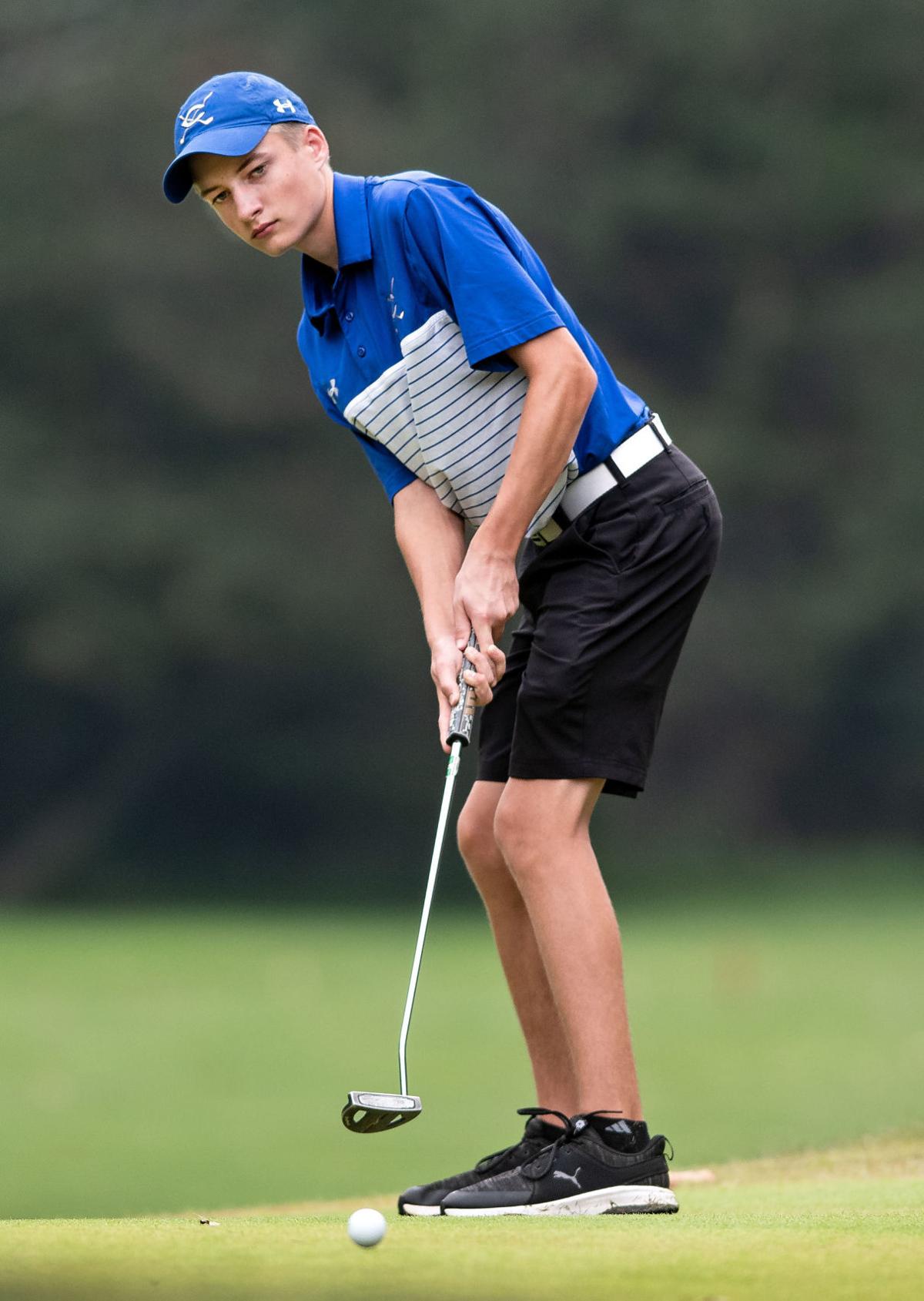 Central’s Will Gochenour watches a putt roll in the Bull Run District golf tournament held at Bryce Resort in Basye on Monday. 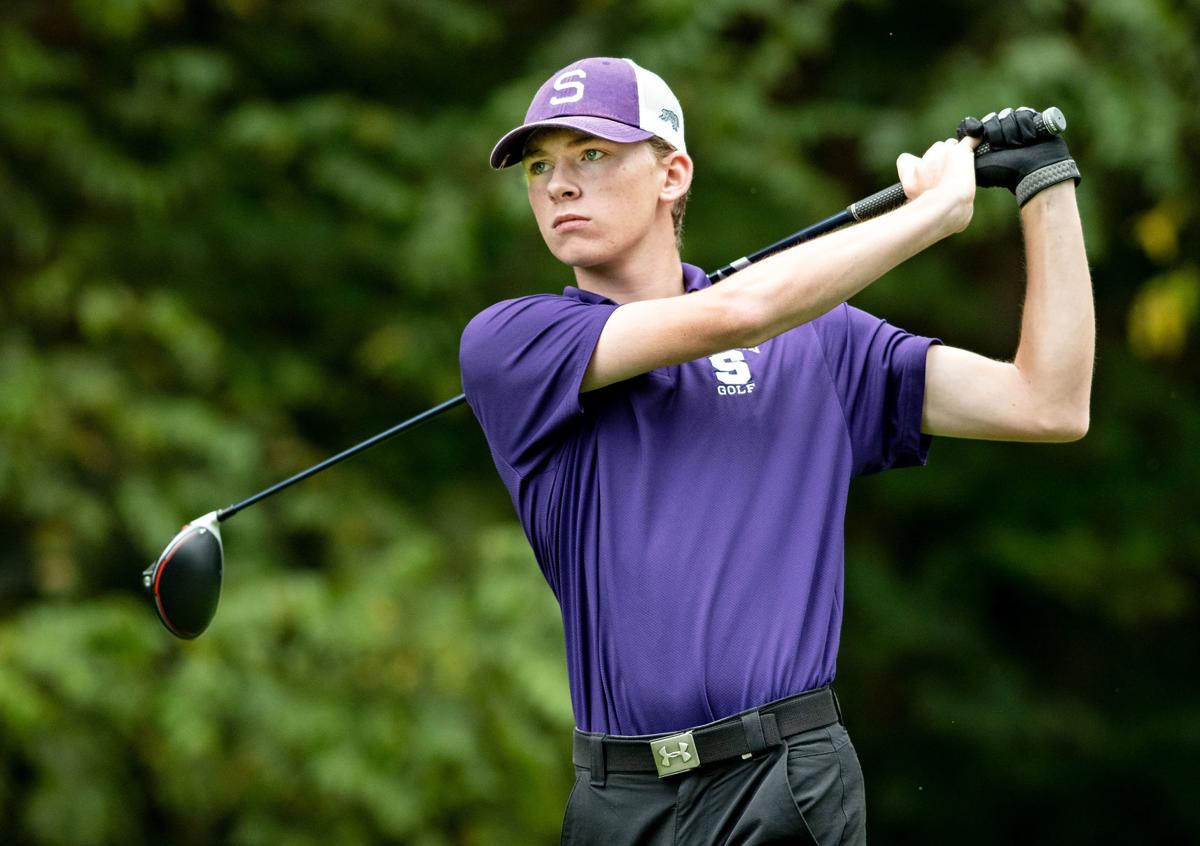 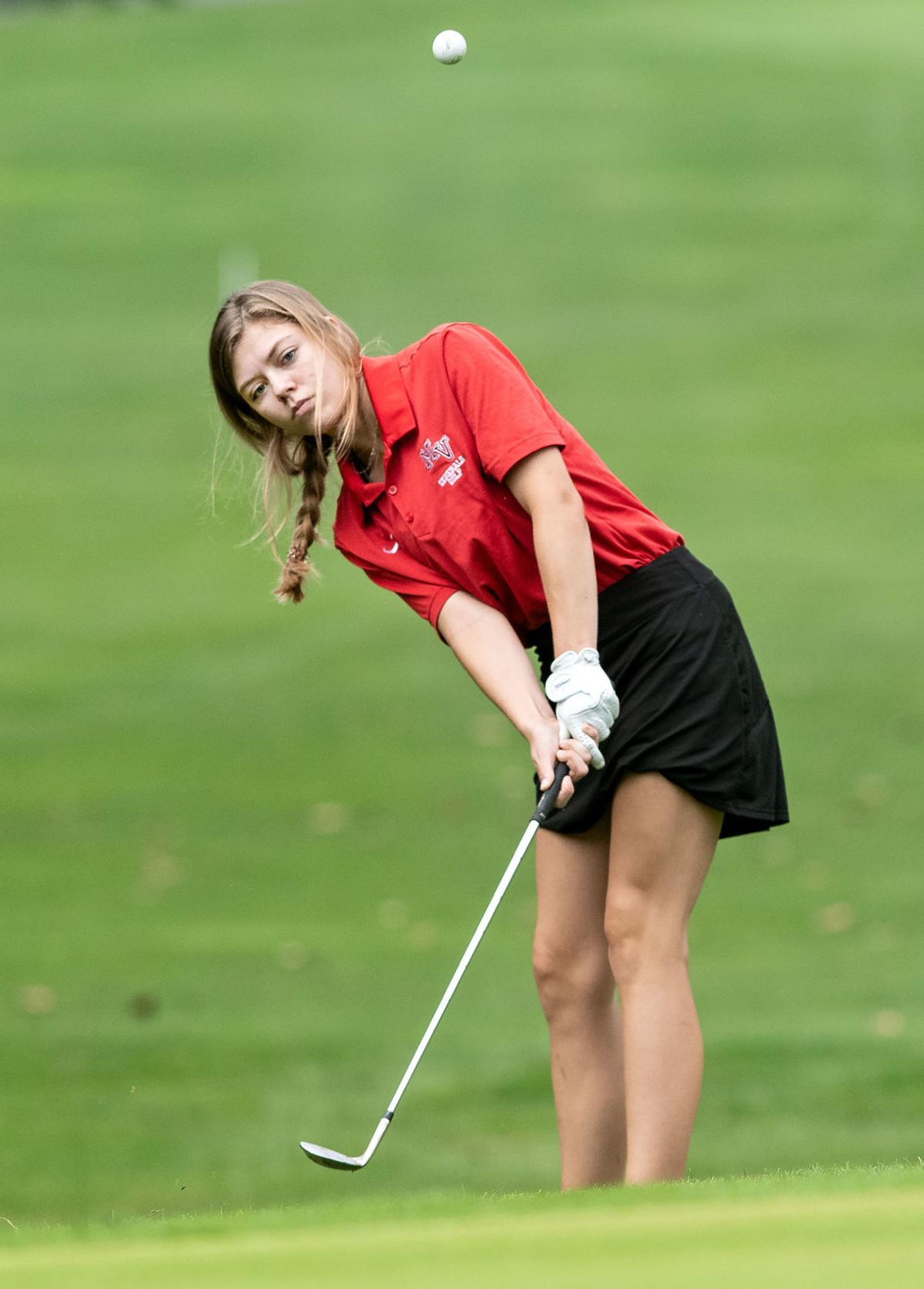 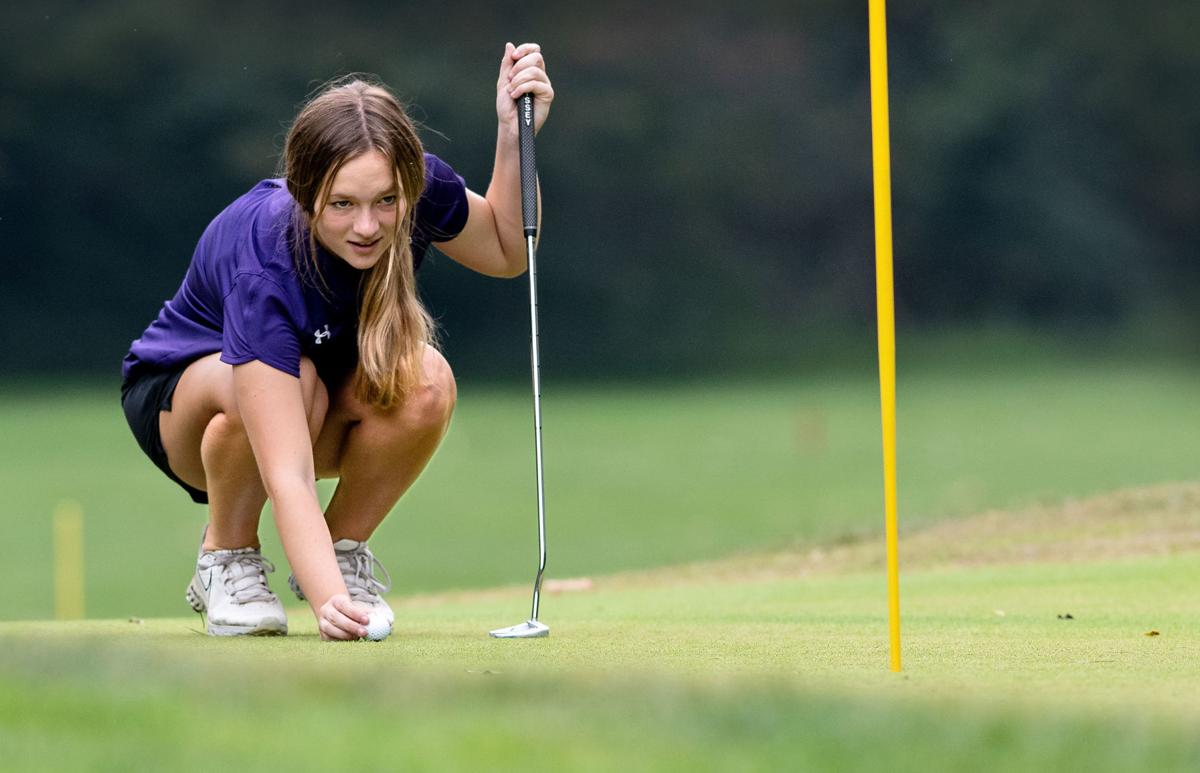 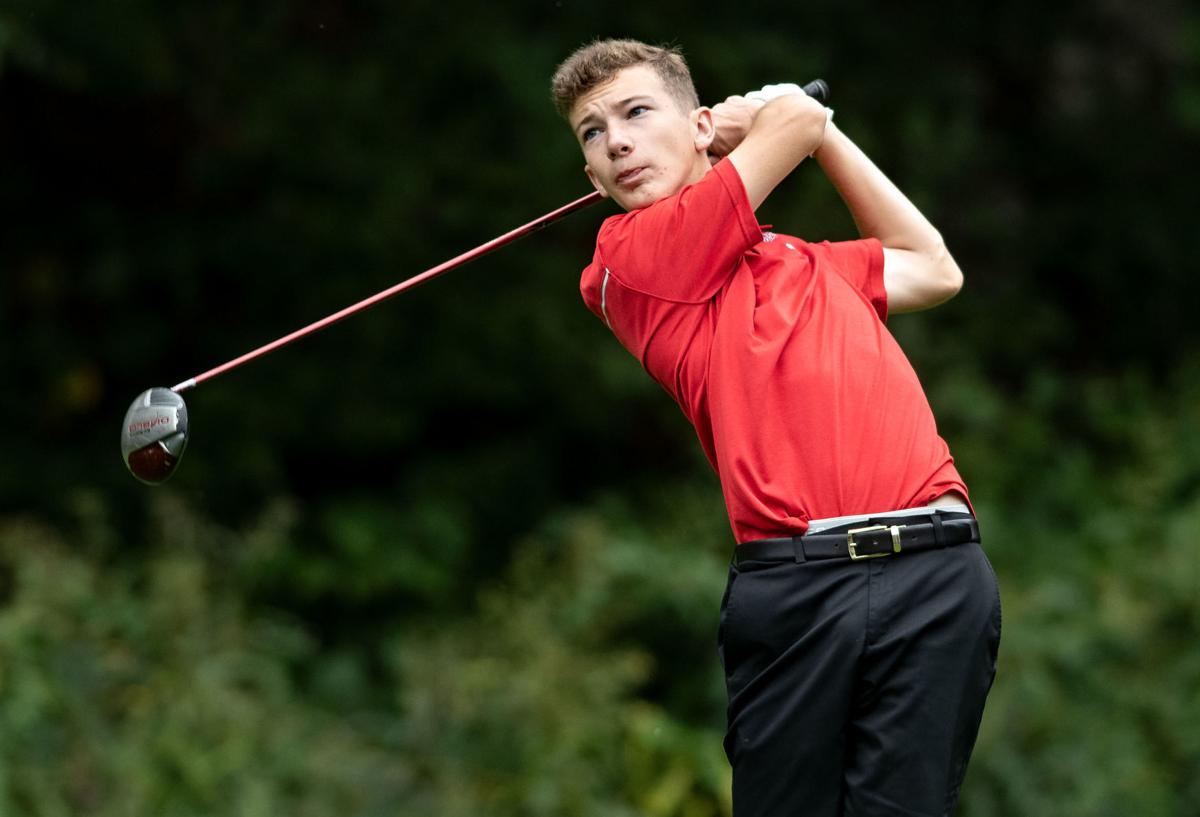 Central’s Will Gochenour watches a putt roll in the Bull Run District golf tournament held at Bryce Resort in Basye on Monday.

The Generals didn't have their best performance, but still finished with a 364. Central finished third with a 394. The top four teams advanced to next week's Region 2B golf tournament at Heritage Oaks Golf Course in Harrisonburg.

Mountain View coach Brady Kibler said his team started off slow, but he was happy with the way they each bounced back.

"With the way we started I was tickled that each of our (top four scorers) were under 100," Kibler said. "Because that's not where it was headed, probably even after the first hole. On the first hole three of our six went into the hazard right (on their tee shots). ...Not our best golf, but we're proud of moving on."

The Generals were led by junior Andrew Wymer with an 82. Wymer bounced back from a 44 on the front nine, which included a 6 on the par 3, third hole. He shot a 38 on the back nine, using consistent play without a birdie.

"I felt pretty good," Wymer said. "Not too good on the front nine, but I came back on the back nine and did better. ...I played pretty well (on the back nine). I struck the ball a little better, made some better putts, played chips. I felt a little bit better back there, more loose."

Wymer finished third overall and Kibler said he showed a lot being able to overcome one bad hole.

"I'm real proud of Andrew's performance," Kibler said. "He came out and performed how we needed him to perform. ...That's something to be proud of. You take that (one hole) away and he's down in the 70s. He's right there on the doorstep of two really good golfers."

Mountain View's Henry Bull shot a 92 and Emily Racer shot a 94 and Joey McNamara shot a 96. Braxton Biller and Jason Dinges each shot a 107.

"That's how the regular season worked out, so that's what I expected today," Central coach Dustin Thomas said of finishing third. "It's our course, I expected us to play decent and I thought we did. So, I'm pleased with today for sure."

Thomas said he was pleased with the way Gochenour performed as well.

"He left some shots out there, but he's focused," Thomas said. "It's postseason time. He's ready to roll. His goal, he's got eyes set on qualifying for the state tournament, and if today was the regional tournament he would've. So he's got good confidence going into next week for sure."

The top individuals not on a scoring team in the top overall 15 also advanced to the regional tournament.

Strasburg did not have enough golfers to qualify as a team, but senior Luke Mason and sophomore Tinleigh Rusher did qualify individually. Mason shot a 90 and Rusher shot a 96.

"I would say that Luke and Tinleigh would both say that they didn't play their best," Strasburg coach Joel Morgan said. "...They're going to hang in there and make the regional tournament and ultimately leaving today and having a shot to play again is always a good feeling. I think that's what they were wanting to do. It gives us an opportunity to go and get back to work a little bit and see if we can't put up a little better score next week."

Morgan said he was also pleased with the way Jimmy Buffington played. Buffington shot a 125, including a 58 on the back nine, and Morgan said that the first-time golfer has really improved as the season went on.

Next week's regional tournament will be made up of the four Bull Run teams that advanced and Stuarts Draft. The top two teams in next week's tournament and the top six individuals not on those teams advance to the Class 2 state tournament held on Oct. 12.

Kibler said he feels good about the Generals' chances of qualifying for the state tournament.

"We like our chances to get second," Kibler said. "We like our chances to compete with Madison (for the title) if we'd have our best day and they would have to struggle just a hair — not a lot just a little bit to give us some room. That's obviously our goal at this point. ...I'm excited for the opportunity to do something like (advancing to states). I think that would be good for our school. Coming back out of the pandemic, the name change, it would be good to have the kids come out and do something like this."