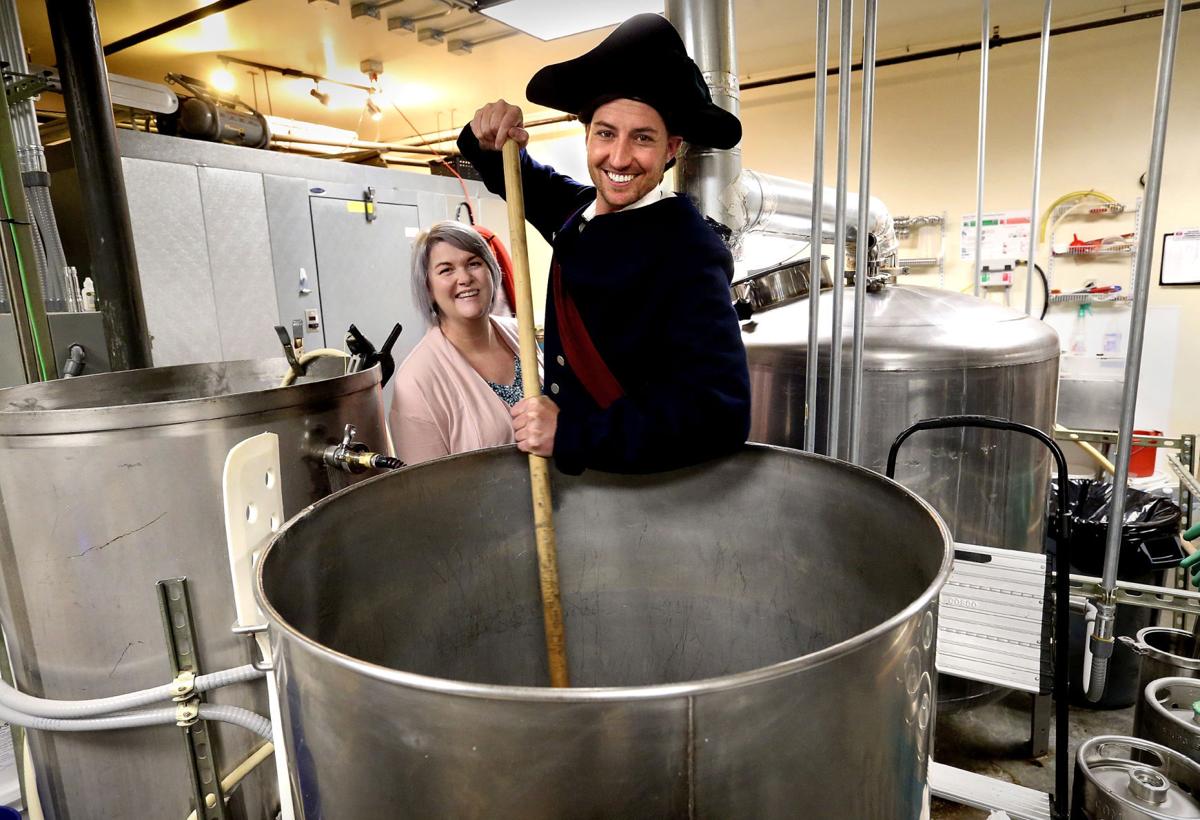 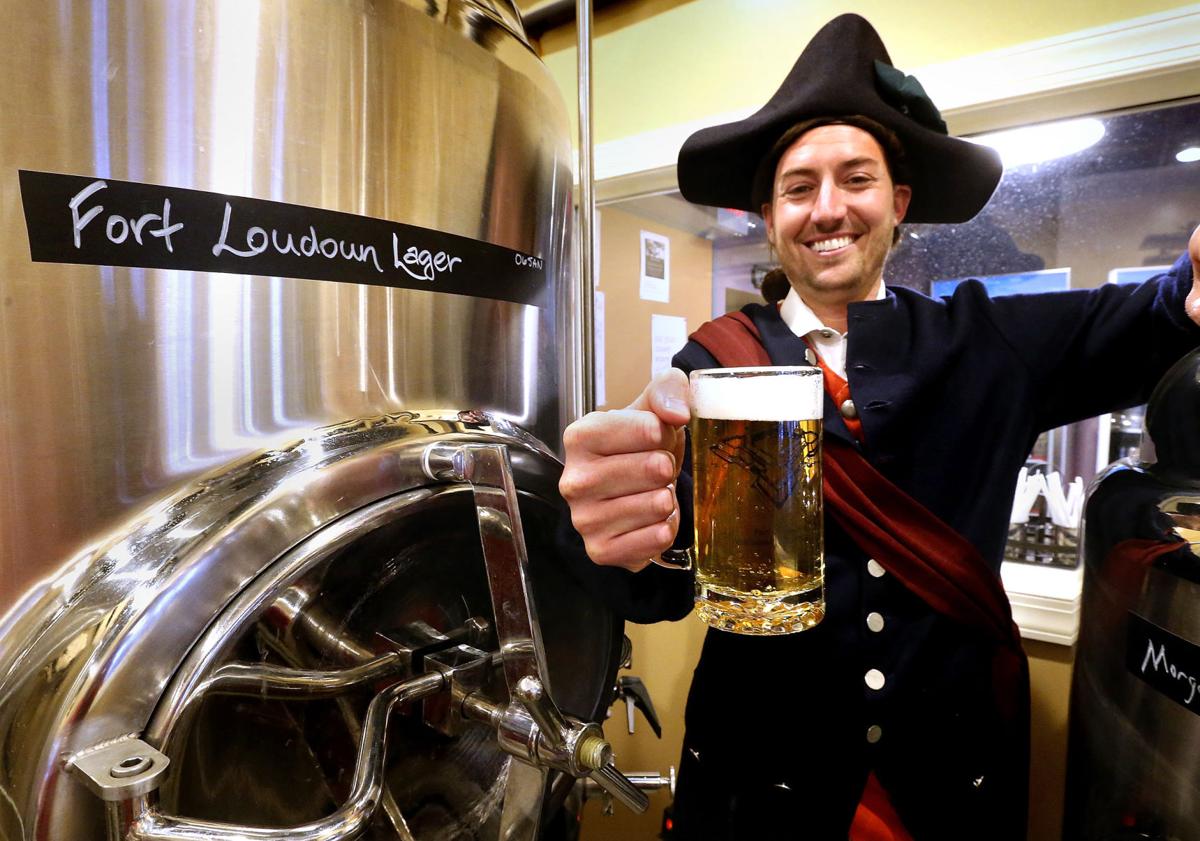 George Washington (also known as Middletown Mayor and French and Indian War Foundation member Charles Harbaugh IV) holds a sample of a new beer, called Fort Loudoun Lager, being brewed at Winchester Brew Works. The special lager is being made for the French & Indian War Foundation, and Winchester Brew Works will be serving it for George Washington’s birthday on Feb. 22.

George Washington (also known as Middletown Mayor and French and Indian War Foundation member Charles Harbaugh IV) holds a sample of a new beer, called Fort Loudoun Lager, being brewed at Winchester Brew Works. The special lager is being made for the French & Indian War Foundation, and Winchester Brew Works will be serving it for George Washington’s birthday on Feb. 22.

WINCHESTER — Fact: George Washington won his first political election thanks in part to his aides giving a free tankard of beer to anyone who agreed to vote for him.

Also fact: The beer sucked. Scott Straub, a board member with the nonprofit French and Indian War Foundation in Winchester, jokingly described the taste in a way that cannot be shared in a family newspaper.

The foundation thinks it can do better. It has partnered with Winchester Brew Works to resurrect and improve the 18th-century beer to help pay off the mortgage on a house the foundation owns at 419 N. Loudoun St. that it plans to convert into an educational center.

“The foundation was established to purchase that property and preserve that site,” the nonprofit’s president, David Grosso, said on Thursday. He estimated the foundation still owes about $95,000 on the house.

The beer that started brewing at 8:30 a.m. Thursday, dubbed Fort Loudoun Lager, is being prepared by the professionals at Winchester Brew Works, who have found ways to improve the original beer’s flavor while honoring its origins.

“It’s a riff on our historic, pre-Prohibition-style lager that we’ve done in the past,” said Winchester Brew Works co-owner Holly Redding. “There’s a little bit of corn for sweetness, there are some old-fashioned malts that you might have found back in pre-Prohibition times.”

Each mug of Fort Loudoun Lager will be served with a drop of molasses to further boost the beer’s flavor, Redding said. That same trick was utilized by Col. James Wood in 1758 to mask the nastiness of the brew that propelled a 26-year-old Washington into the Virginia House of Burgesses.

Washington was 16 when he first came to Winchester as a surveyor. He joined the Virginia militia in 1752 and, as a colonel in the Colonial army, oversaw construction of Fort Loudoun along present-day North Loudoun Street to protect the area from incursions from the French and Native Americans. Today, the only remnant of Fort Loudoun is a hand-dug water well located behind the foundation’s house at 419 N. Loudoun St.

Among those on hand to celebrate Thursday’s brewing of the new Fort Loudoun Lager at Winchester Brew Works, located at 320 N. Cameron St., was Washington himself, who bore a striking resemblance to Middletown mayor and historical re-enactor Charles Harbaugh IV.

Washington (Harbaugh) was reluctant to admit that his supporters used beer to win votes in 1758, preferring instead to say “we used beer to recognize our voters in Frederick County and Winchester. Beer was an important part of Colonial America.”

The first mug of the new Fort Loudoun Lager will be poured on Washington’s birthday, Feb. 22, during a 20th anniversary celebration of the French and Indian War Foundation.

“It’s going to be on 2-22-22 and you’ll get two slices of pizza [from Pizzoco in Winchester], two pints of beer and a tankard for the price of your ticket,” Straub said.

Tickets to the event, which will be held at Winchester Brew Works, are $25 each and can be purchased at the French and Indian War Foundation’s website, fiwf.org. Since a very limited amount of Fort Loudoun Lager is being brewed, only 100 tickets will be sold. As of Thursday morning, Straub said about 60 tickets were still available.

In addition to next month’s anniversary celebration, the French and Indian War Foundation is also raising money by raffling off a contemporary flintlock rifle. Entries are $25 each or five for $100, and anyone who purchases five or more entries will receive a free one-year membership in the foundation. Raffle tickets can be purchased through the foundation’s website or at the Feb. 22 anniversary event, and the drawing will be held during the nonprofit’s annual membership meeting in November.