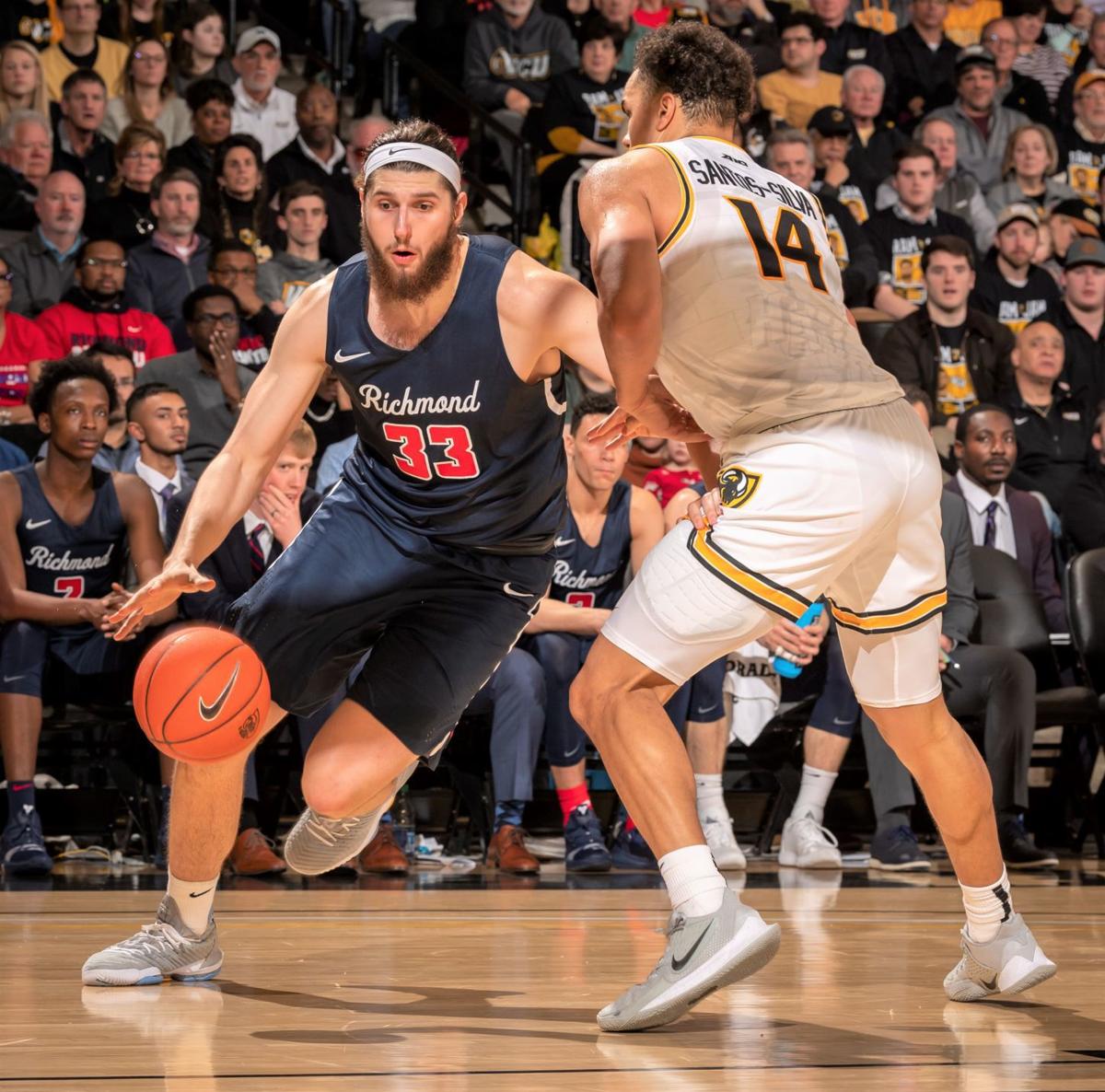 Grant Golden makes a move around a defender in a game last season. Golden and his brother Bryce Golden have had a lot of success and share a special bond with the game of basketball. 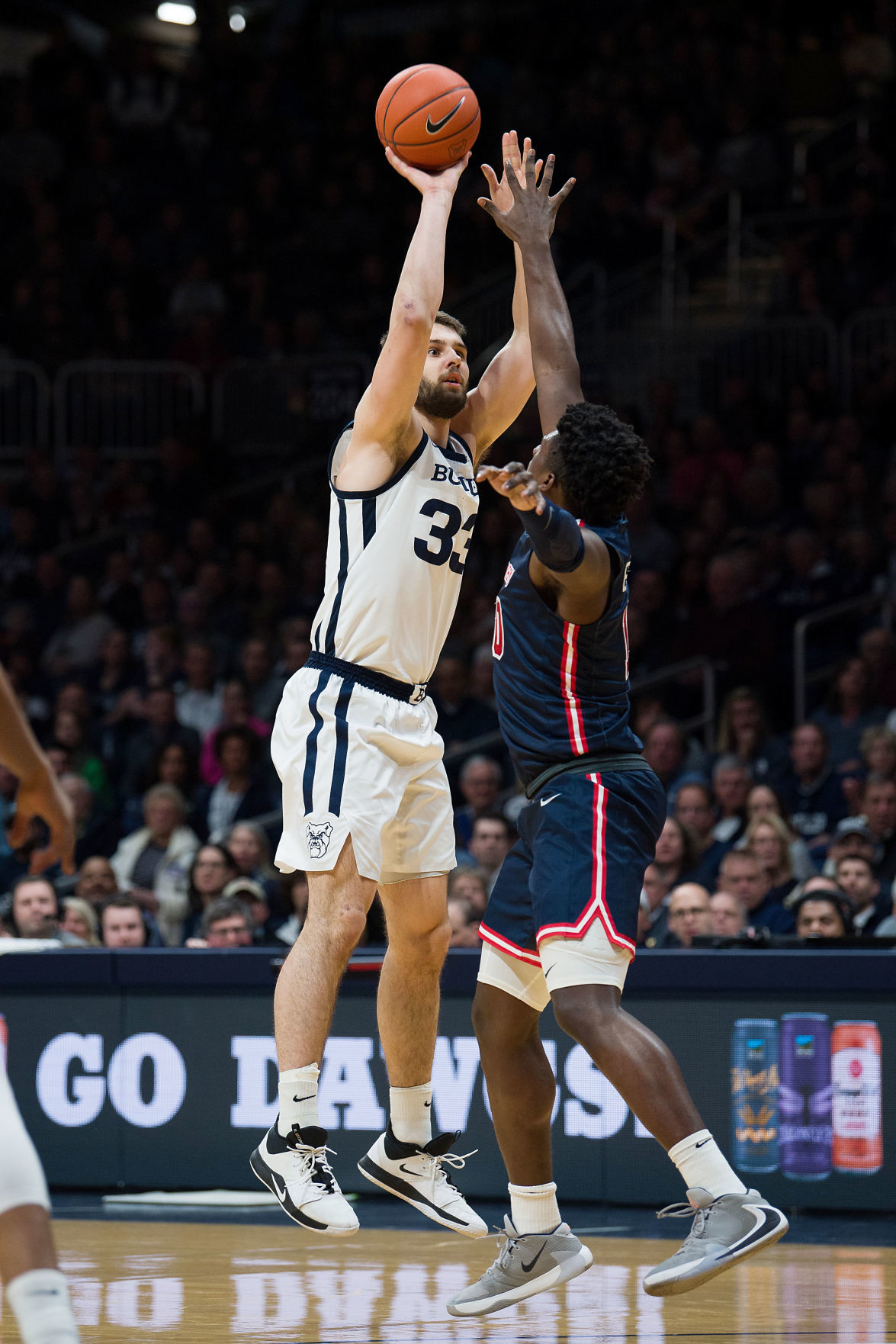 Bryce Golden goes up for a shot during a game this past season for Butler. The Middletown resident and his brother Grant have had strong Division I college basketball careers. Grant Golden is a redshirt junior at the University of Richmond, while Bryce Golden is a sophomore at Butler. 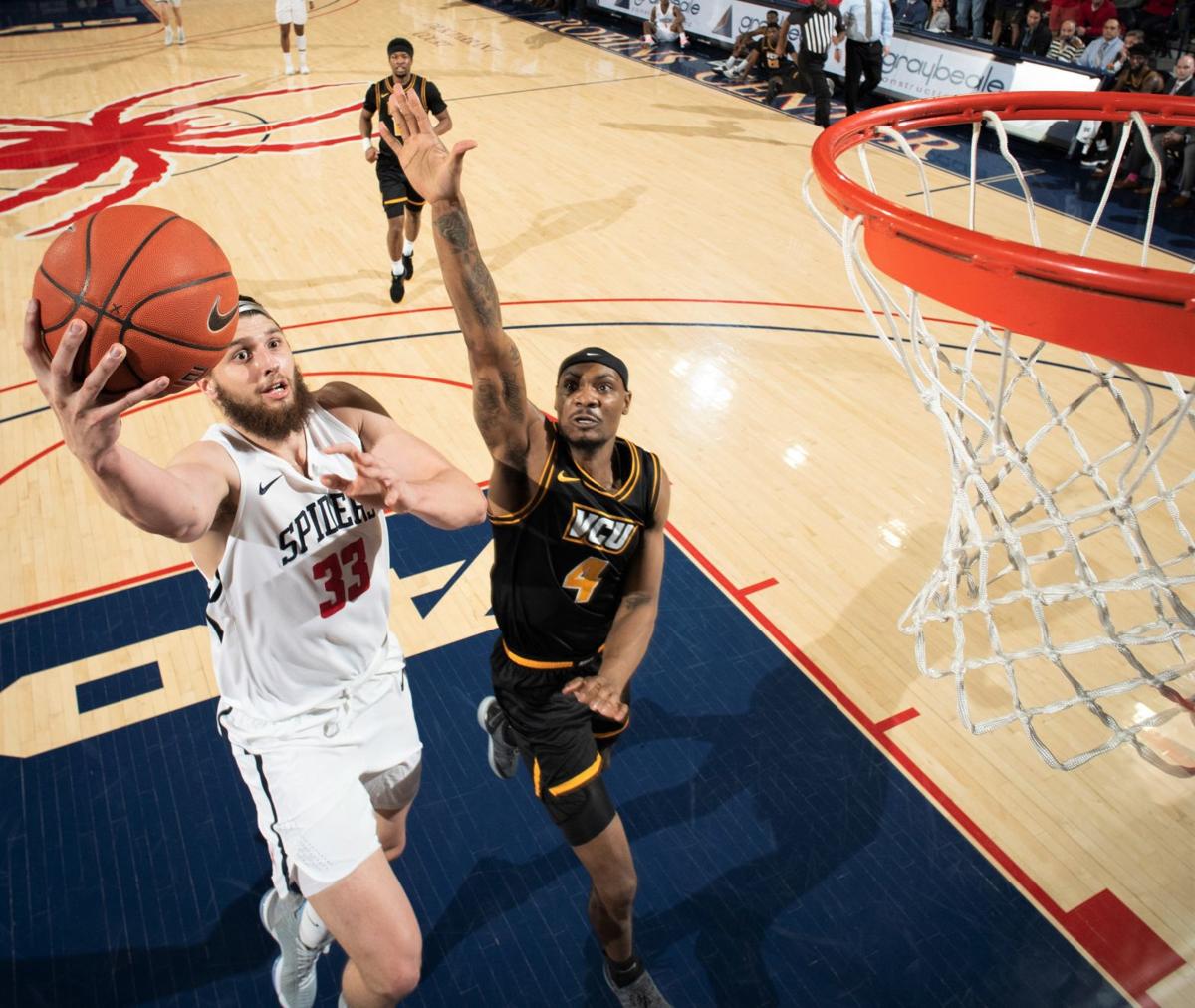 Grant Golden drives to the basket in a game this past season for the University of Richmond. Golden, a former Sherando standout, has made a big impact for the Spiders the last three years.

Grant Golden makes a move around a defender in a game last season. Golden and his brother Bryce Golden have had a lot of success and share a special bond with the game of basketball.

Bryce Golden goes up for a shot during a game this past season for Butler. The Middletown resident and his brother Grant have had strong Division I college basketball careers. Grant Golden is a redshirt junior at the University of Richmond, while Bryce Golden is a sophomore at Butler.

Grant Golden drives to the basket in a game this past season for the University of Richmond. Golden, a former Sherando standout, has made a big impact for the Spiders the last three years.

The outside basketball court at Lord Fairfax Community College has been the site of some intense one-on-one basketball lately.

While many Division 1 college basketball players are likely struggling to find someone to work out with during the COVID-19 pandemic, brothers Bryce and Grant Golden, of Middletown, (although they are listed as being from Winchester on their college websites) don’t have that problem.

Bryce, a sophomore at Butler University, and Grant, a redshirt junior at the University of Richmond, have had time to play a lot more one-on-one games during the pandemic.

“LFCC right down the street, they have an outside court. We’ve played one-on-one, I think, nine, 10 times and I’ve won eight of them,” Grant Golden said with a laugh.

The 6-foot-9 Bryce Golden admitted he’s been on the losing end of some of their battles, but he’s not giving up.

“I have been struggling a little bit, but it looks like we’re going to be doing this for a while,” Bryce Golden said. “So, hopefully, I can even that out.”

The pair said that before the pandemic they hadn’t been able to play together in a year and a half. Grant Golden said when they go one-on-one, it’s usually a battle.

“We’ve had lots of one-on-one throughout the days,” Grant Golden said. “Lots of bruises, scars, cuts, fights for sure. We’ve seen it all.”

The 6-foot-10 Grant Golden said that having a brother who is going through the same thing as he has helped both of them a lot.

“Obviously, having another division 1 basketball player in your house to go up against every day is something that helps you individually as a person,” Grant Golden said. “It just pushes you to get to that next level.”

The brothers were hopeful that they could have had a special opportunity in March. There were some projections that not only had both Butler and Richmond making the NCAA Men’s Basketball Tournament but possibly playing each other in the second round.

The NCAA Tournament was canceled due to the COVID-19 pandemic but both know if it would have happened it would have been a special moment for their family.

Bryce Golden said it would have been a “surreal moment.”

Both Grant and Bryce Golden’s college careers got off to slow starts.

Grant Golden had to redshirt his first year at Richmond. During a game in December 2016, he collapsed on the court due to a problem with the rhythm of his heart. Four days later he underwent a cardiac ablation procedure to help address the problem. He was granted a medical redshirt and returned to the court the following season.

“Obviously, not the way you envisioned your freshman year going,” Grant Golden said. “But with that happening and me being able to redshirt that year and sort of get to sit back and work on myself individually to see what I needed to do for my basketball game, my body. Being able to watch T.J. Cline, who was the senior that played my position that year. He ended up winning A-10 player of the year. Being able to watch him and see how he managed the offense for us and all the things that he was able to do for our team, I think that really helped me a lot. So I think that medical redshirt was a blessing in disguise. It really helped me develop and helped me project me toward where I am today.”

“It was a six-month recovery,” he said. “Unfortunately, I ended up getting surgery right before I went to school. So right when every freshman gets there and wants to be in the mix, start finding their way. But unfortunately, I was sidelined for that. Still, I got a lot better in a lot of different ways but not exactly what you want to do when you get to college. It was tough but it definitely helped me out for (sophomore) season.”

This past season Bryce Golden was one of only three players to play and start in every game for the Bulldogs. He averaged 7.9 points and 3.9 rebounds. He shot 50.3 percent (100-for-199) from the field.

He said his freshman year helped prepare him for his sophomore season.

“Last summer, I kind of knew what I was getting myself into with my sophomore season and Big East basketball,” he said. “This year, I started all the games. So it was a good year. Still, I had a lot of ups and downs, but I learned a lot.”

Grant Golden has put together a stellar career over the last three seasons. He became the first player in program history to earn all-Conference honors after his freshman, sophomore and junior seasons.

Two weeks ago, Grant Golden declared himself eligible for the NBA draft, but he is reserving the right to maintain his final year of college eligibility. He said he doesn’t plan on actually leaving Richmond and going pro, but he wanted to go through the process of being drafted. He has until June 3 to withdraw his name from the draft and retain college eligibility.

He said he feels like his decision-making on the court has improved over the years and that has helped elevate his game and his teammates.

The Spiders haven’t been a top team in the Atlantic 10, let alone the country for a while but this past season things began to take off for the program. They went 24-7, and 14-4 in the Atlantic-10. Grant Golden said that teamwork was a big key in the success of the team last season.

Butler had a strong season as well, finishing 22-9 overall and 10-8 in the Big East. Bryce Golden said that he wants to improve on his ball-handling and he’s been trying to stay in shape as best he can during the COVID-19 pandemic.

Even though Bryce and Grant Golden are typically thousands of miles apart during the school year, they stay in touch and are very aware of how each other is doing.

“Obviously, being far away we can’t be with each other, but we’re in constant contact,” Grant Golden said. “I’m texting him all the time. He’s face-timing me, talking about games. He’s asking me what I think he could have done better. I’m asking him stuff about our game. Just to be able to have someone like that, being able to call someone up like that and they understand if you don’t want to talk about it if there was a tough game, is a really cool thing.”

Grant Golden said even when they were younger his brother was around him and they would push each other on the court. Grant Golden spent his first two years of high school at Sherando before transferring to St. James in Hagerstown, Maryland, and Bryce Golden attended St. James all four of his high school years.

“We were really close,” Grant Golden said. “We’re close in age. So I think that’s sort of helped us, especially when we were younger. He was always sort of hanging out with my friends and stuff like that. It was never really weird. He was never treated like a little brother when it came to stuff like that. So obviously, we’re really close because of that. Over the years to have somebody, a sibling, that’s with you every day when you’re younger, that has the same goal in mind as you is really awesome. That sense of accountability and challenging each other every day to try to get better is really cool.”

Bryce Golden said it’s always been great for him to have an older brother to look up to and talk to.

“It’s been a great thing to have,” he said. “ Obviously, you look for people when you play sports that you can admire and you can look to and kind of want the same things as you do, and I have one of them living in my own home with me. So he’s been a great resource. Even before I was in college, we could talk about what it’s like and the type of work it is and how to prepare for every situation. And just from another standpoint, just growing up with someone you can be so competitive with playing one-on-one. It builds a lot of character for sure and it definitely helped me at the next level.”

Bryce and Grant Golden didn’t get to have their dream match-up on the basketball court this year, but both agreed in the back of their minds they’re still hopeful next year it could happen.

“That would mean everything,” Grant Golden said. “For him, Butler has always had a great tradition of going to the tournament, especially in the last 10 years with (former Butler standout) Gordon Hayward. Then obviously, the last time we’ve went was 2011. So we were really excited because we felt like we were going to be the first team to get us back there, and obviously, we felt like we were in and then it got cut short. So I know it would mean a lot to both of us, and hopefully we can both get there next year.”