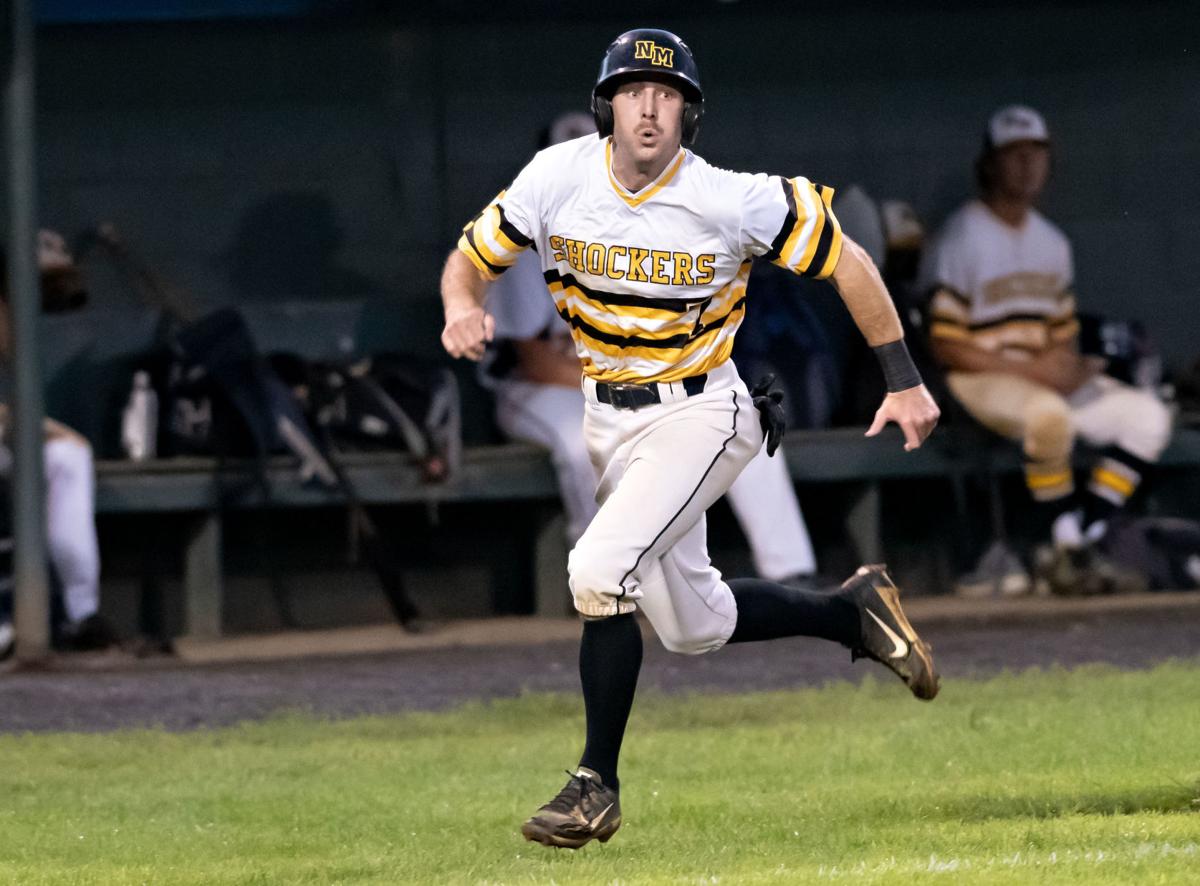 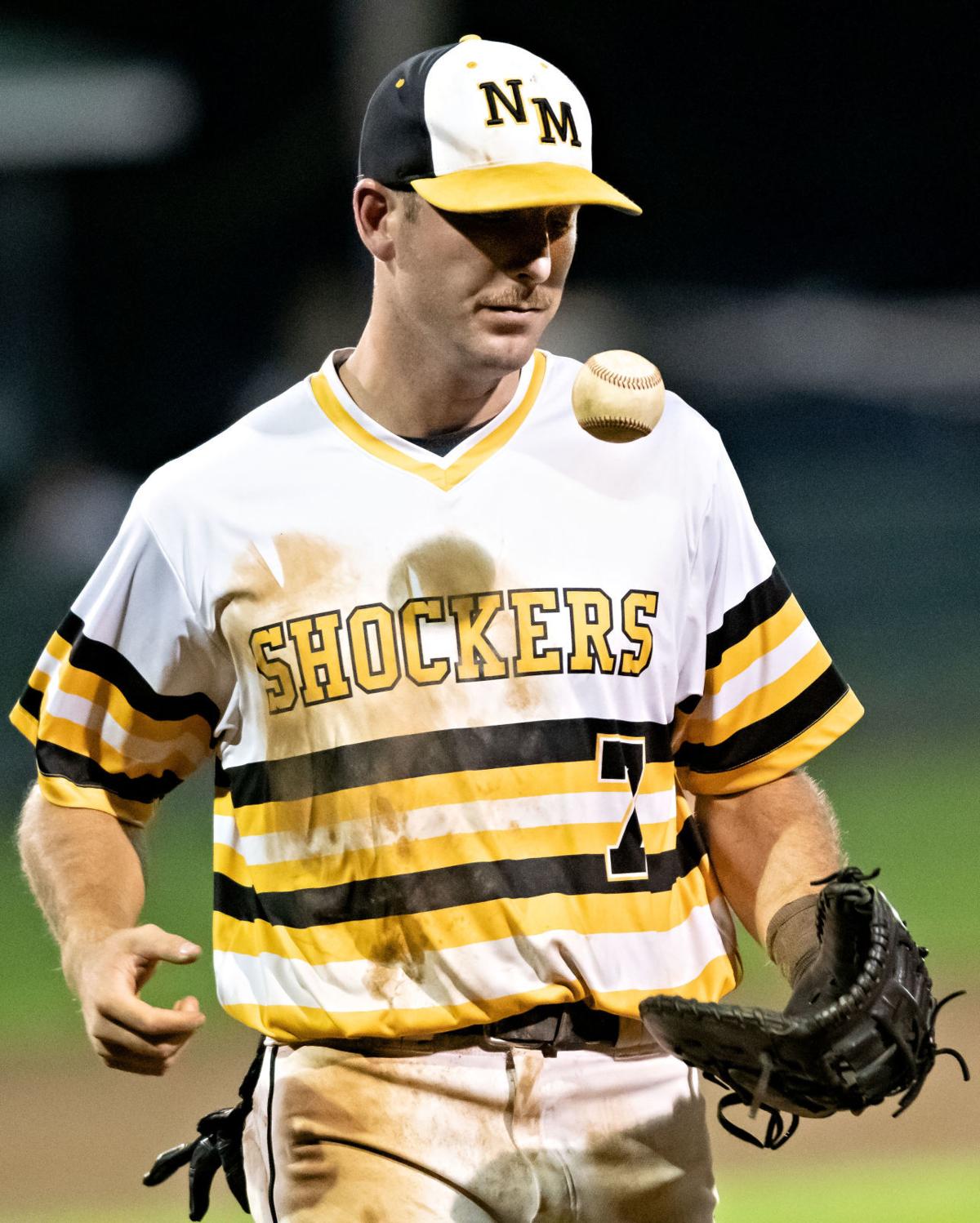 New Market’s Nick Goode juggles the ball after recording the third out during an early inning of their Aug. 5 game.

New Market’s Nick Goode juggles the ball after recording the third out during an early inning of their Aug. 5 game.

Nick Goode’s original plans for 2020 didn’t include another round in the Rockingham County Baseball League.

Goode, a Middletown native and graduate of James Wood High School and Shenandoah University, told New Market Shockers head coach Nolan Potts as much following the end of the 2019 RCBL season. Goode was about to move to Fairfax – he works as an audit associate for a firm in Falls Church – after the Shockers were bounced from the first round of the playoffs last August, and the commute alone was enough to deter him from pursuing a fifth season with the Shockers.

But COVID-19, as it has for many others, altered Goode’s plans. As the only summer league in the area playing ball, the RCBL drew talent from the NCAA Division I and professional ranks in a way it hadn’t in years past. Ballplayers were looking for a place to hone their skills and get back on a diamond for the first time in months, and the chance to play against such a high level of competition piqued Goode’s interest.

About a week before the 2020 season was to begin, Goode reached out to Potts. Goode wanted to return to the Shockers this summer if there was a spot for him. Of course there was room for a player that Potts considers to be one of the most consistent hitters in the RCBL.

“When he’s there, everybody in the league knows that he’s one of the top players in the league, especially at the plate,” Potts, who has played with or coached Goode during the latter’s entire Shockers career, said on Monday. “He’s probably almost a .400 hitter for his career. It’s incredible. … At the plate he’s as consistent as he can get as far as putting the ball in play, making solid contact, working the count. He’s always done that since I’ve known him.”

In a summer season that was condensed in response to COVID-19, Goode has continued in 2020 the recent string of success he’s enjoyed at the plate with the Shockers. He batted .415 (22-for-53) during the regular season – the fourth-best mark in the RCBL among qualified hitters – while scoring 15 runs and driving in six RBIs, and in four playoff games entering Monday’s contest at Grottoes he had six hits in 16 at-bats (.375).

This year marks the third straight that Goode posted a batting average of .400 or better for New Market. He won the RCBL’s batting title in 2018 when he hit .465 in 21 regular-season games (Goode went an additional 11-for-23 in the playoffs that year) in what was his first summer season after graduating from Shenandoah that spring, and last season he batted .400.

Two years removed from college ball, the 23-year-old is still finding ways to maintain his consistency even while a full-time job limits his baseball activities to the summer months.

“That’s a good question,” Goode replied when asked how he’s stayed so consistent. “This year I literally decided to play like a week before (the season) but it’s just kind of staying in the groove once practices start up right before the season. Really, I just go out with a clear mind every single year and just have fun.

“And really, the group of guys we have this year, I have talent in front of me, talent behind me, so I continue to get good pitches every single time out,” added Goode, who is part of a long list of past and present Shenandoah University players who make up the Shockers’ roster this summer. “It’s really more (a credit) to them, not really me.”

Potts disagrees, noting that Goode’s success at the plate can be traced back to his preparation. While many New Market players are “just trying to see how far they can hit the ball” during batting practice, Potts said, Goode is much more businesslike.

“Nick goes up there and has almost like a regimented BP session that he takes, and he tells me ‘I’m gonna get some bunts down. I need you to throw me some inside pitches. I need you to throw me some outside pitches,’” said Potts, also a former SU player. “Most guys just want it right down the middle and … they just want to see if they can hit the ball out. But Nick’s up there and he has an approach and he knows what he’s looking for.”

Goode’s bat has been an important piece of his game, but Potts said his favorite part of Goode’s playstyle is his baserunning.

“He’s an irritant on the bases,” Potts said. “He might be the most aggressive baserunner I’ve ever seen. When he gets on, he just causes chaos.”

Ever since his college days, Goode said he’s been an aggressor on the basepaths, though the reins are much looser in summer ball than they were while he was at Shenandoah. Goode was never a prolific base stealer at SU (he swiped 14 bases in two seasons as a starter), but he stole 18 during his banner year in the RCBL in 2018 and had eight steals in 14 regular-season games this summer.

Goode said his baserunning approach always amounts to a simple question: what is the easiest route to home plate without getting out? In Sunday’s 10-5 win over Grottoes, the first game in a best-of-5 semifinal series, that meant a straight steal of home.

“I couldn’t believe it,” Potts said of Goode’s feat. “The minute he hit third base, the first pitch (the pitcher) threw he straight stole home on the first pitch. And this is in a playoff game down three, I think, in like the sixth inning. Him on the bases, it’s so much fun to watch him because 95% of the time he’s causing problems for other teams.”

And on top of all the success he’s had at the plate and on the bases this summer, Goode has played flawless defense at first base, a position the former second baseman and outfielder had only briefly played during a stint in the Valley Baseball League in 2017. Arm trouble a few games into the 2020 RCBL season prompted Goode to move from second to first, and through Sunday’s game Goode had yet to commit an error at first base this summer.

“He’s been outstanding. He’s fielding ground balls, he’s bodying it up, he’s scooping balls at first like he’s always played over there,” Potts said. “He’s facing better competition than in years past and he’s pretty much playing a brand-new position, and he’s been one of the best in the league at it.”

Goode, who first played for New Market in 2015, is anticipating that this summer will be his last in a Shockers uniform, at least as long as he’s living outside the Shenandoah Valley. He and his teammates are hoping the season ends with an RCBL title, something New Market has never won.

“For sure, I think it’s definitely a possibility with the talent that we have,” Goode said. “One through nine can hit, even the bench guys that we bring can definitely hit and run or whatever we need them to do. Our starting pitching could definitely get us through the playoffs and our bullpen as well is very strong. I think our pitching’s definitely one of the strongest in the league and I think that can carry us all the way to the finals and hopefully a championship.”