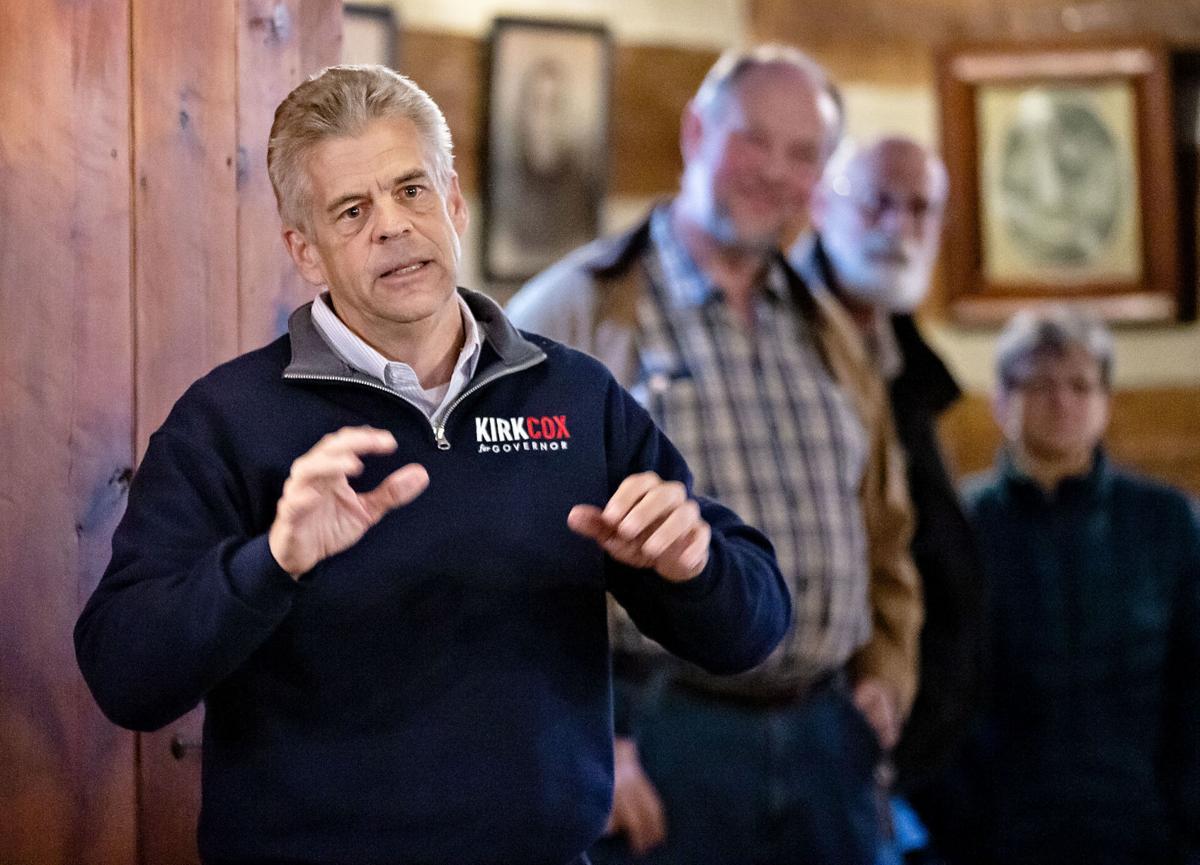 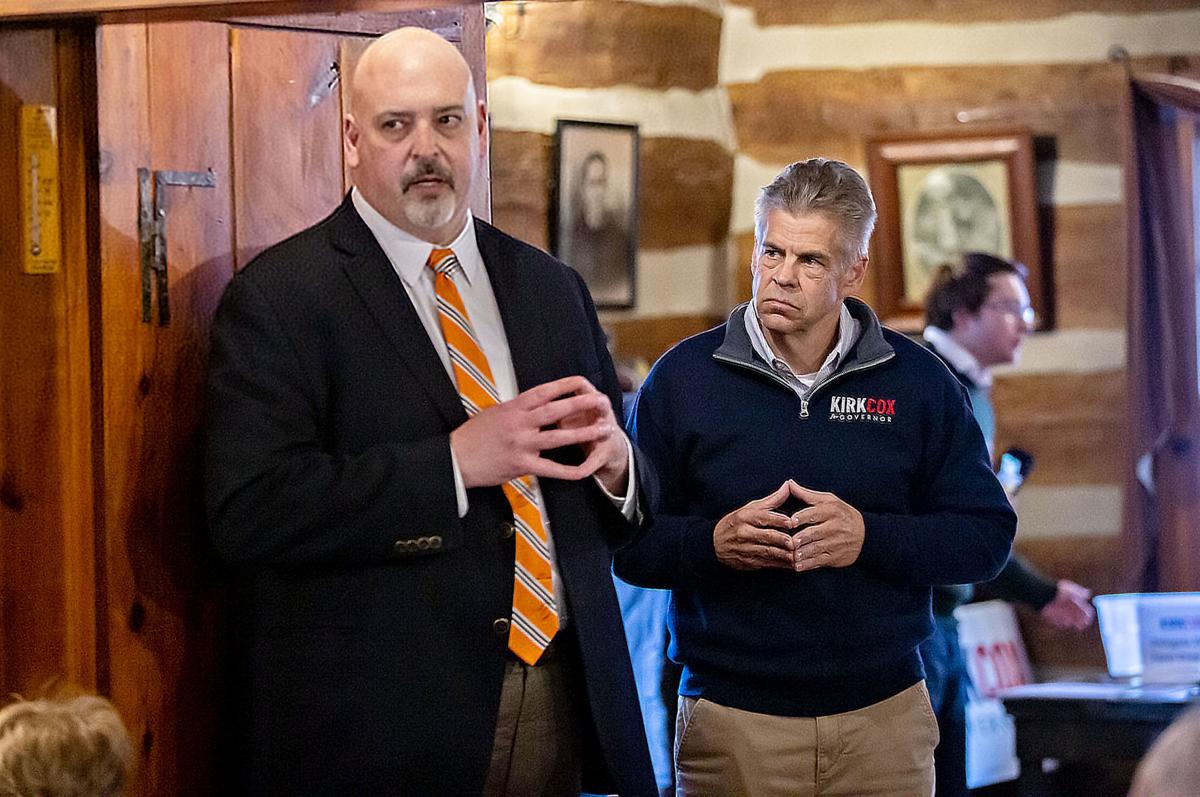 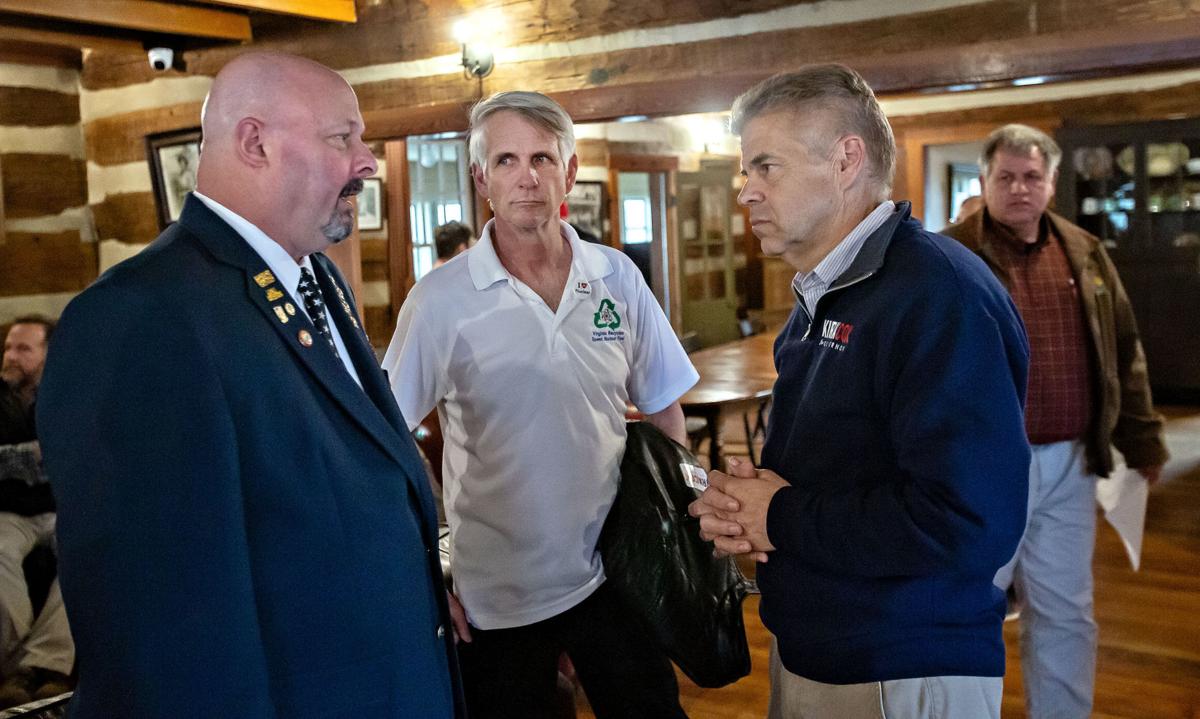 He’s a liberal arts U.S. history teacher who has defeated Democrats in a predominately blue voter area and has experience in state government.

That was among the messages Republican candidate for governor Kirk Cox shared during a meet and greet at the French cabin in Woodstock on Thursday evening that was organized by House of Delegate Minority Leader Todd Gilbert, R-Mount Jackson.

“He was able to get reelected in a district where a Democrat could’ve got elected,” said Jacob French, 21, a member of the family that owns the cabin where the event was held.

“So that tells me he’s got a better chance of winning a statewide election,” French said of Cox’s ability to appeal to Northern Virginia Democrats who might be willing to vote for a fiscally conservative Republican in this November’s election for governor.

By being a former speaker of the House in the state legislature, Cox can appeal to members of his party, both radical and more center, as well as across the aisle, French said.

Gilbert, who Cox said is among his picks of talented people, opened the event after some mingling, saying Cox is the man to take back the governorship and reverse the tide of the state from becoming radically left at such a fast pace.

“Of all the people running for governor on both sides, nobody is more prepared to be governor, including Terry McAuliffe, who’s already been governor once before,” Gilbert told to the crowd, which broke out into laughter. Gilbert touted Cox’s ability to focus on “kitchen table issues” of quality of life and education. Accomplishments of Cox that Gilbert shared include stopping tax increases, gun control measures and abortion on the day of birth legislation.

About 30 people attended the event, including J. Kenneth Klinge, of Basye, a former executive director of the state’s Republican Party, said he is an all-in supporter of Cox.

“[Cox] gets things done,” Klinge said, adding he wants to see kids back into school and Cox seems like a more typical Republican.

John Bost, 66, of Strasburg, said he also has not settled on a candidate and hasn’t heard them all speak.

During his address to the crowd following Gilbert’s introduction, Cox said that as a teacher he had students debate the Federalist Papers so that they would know the common principles of the greatest form of representative government the world has ever invented.

Cox ran for the House of Delegates in 1990 and worked his way up to being speaker of the house over a time that included Virginia at one point having the second-largest tax cut in state history, a freeze on college tuition, the fourth-lowest crime rate, the lowest recidivism rate and being the number one state to do business in, he said.

He can interview with the Washington Post, he’s interested in building coalitions with people of different backgrounds and Democrats, and he supports what the state of Georgia recently passed for voting regulations, he told the crowd while answering a few questions.

In a one-on-one interview with the Northern Virginia Daily during the event, Cox said an issue he would like to address for the Shenandoah County area is workforce readiness in terms of program availability and matching it with available jobs. He’s worked on providing an online network of higher education institutions to increase educational options, and changing requirements for credential programs.

In attendance for the event were John Massoud, the chairman of the Republican Party’s 6th District and a Strasburg town councilman, and Shenandoah County Sheriff Timothy Carter. Carter said he tries to meet with any candidate who visits the area to discuss recent policing legislation reform coming out of Richmond.

Justin Pence, who was in attendance and a friend of Gilbert’s, said he wanted to see the candidate for himself and was sold on him.

“I like the fact that he’s not a lawyer, he’s a school teacher,” Pence said. “He’s a so-called, ‘normal person’...although he’s been a politician for a long time, he’s one of us,” Pence said.

Cox is among several people running for the GOP nomination for governor. A decision on the party’s nomination will be made at its convention on May 8.

The offices of Virginia governor, lieutenant governor and attorney general will be voted on Nov. 2.

Correction: This story has been updated to show that J. Kenneth Klinge is an all-in supporter of Cox.