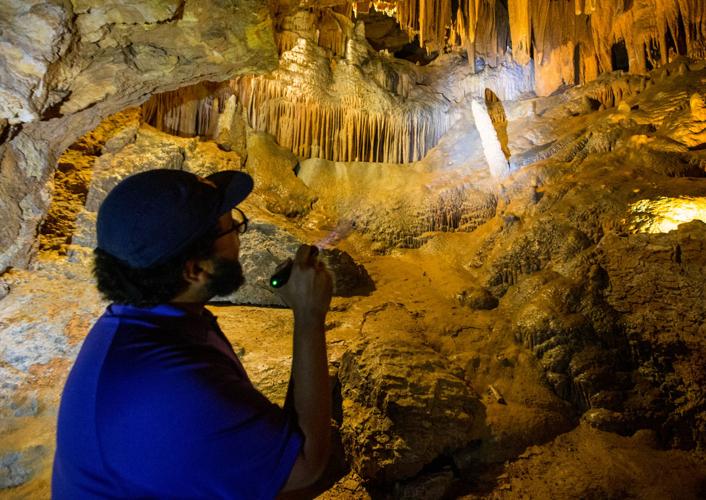 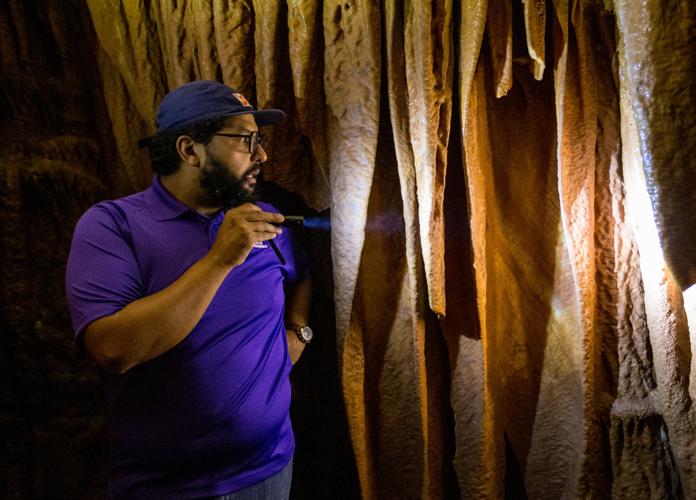 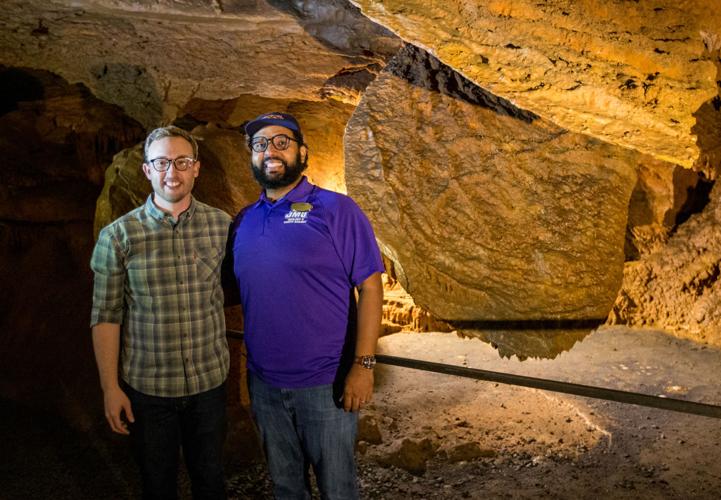 Austin Shank, left, who is Grottoes parks and tourism director, and James Madison University geology professor Angel Garcia pose for a photo with a large shield inside Grand Caverns.

Austin Shank, left, who is Grottoes parks and tourism director, and James Madison University geology professor Angel Garcia pose for a photo with a large shield inside Grand Caverns.

But it’s one that Austin Shank, Grottoes parks and tourism director, and James Madison University geology professor Ángel Garcia said is worth it.

Over the past year, Shank and Garcia have worked to make Grand Caverns a geoheritage site, which would preserve the history and character of the caverns, create additional educational and researching opportunities, and bolster the caverns’ reputation nationally, Shank said.

A geoheritage site is a place where geologic features or landscapes played a role in cultural or historical events, according to the Geological Society of America.

“Once I dug into it, once [Garcia] explained it to me, the more I thought, ‘Wow, that’s such a no-brainer,’” Shank said in an interview with the Daily News-Record. “That is such a wonderful fit for what Grand Caverns is, and I wouldn’t necessarily say it’s the easiest thing to attain, but Grand Caverns has all the building blocks for it.”

Under guidelines from the National Park Service, Grand Caverns staff would collect demographic data about the park and the main geoheritage features it offers. The criteria would also require staff to state the cave’s significance, rarity and quality on a local, state national and universal level.

For Grand Caverns to be recognized internationally, staff would adhere to the United Nations Educational, Scientific and Cultural Organization guidelines, where staff would need to prove that Grand Caverns has international value and outline the town’s measures to preserve its history while also establishing initiatives for research to still take place.

Becoming a geoheritage site would bolster Grand Caverns’ reputation nationally and internationally, Shank said, and would provide additional resources and opportunities for research.

“The primary benefit for being recognized is to elevate our capacity to educate,” Shank said.

Grottoes town staff submitted a letter of intent to JMU leadership for future collaboration opportunities, which may include renovating the Grand Caverns entrance building and converting two storage rooms into permanent lab space for JMU’s Geology and Environmental Science Department.

Shank said Grand Caverns has previously partnered with JMU and other researchers, but the current partnership with Garcia can’t be compared to those in the past.

“It’s really neat, because a lot of the work that Angel’s been doing, and then what his students have been doing, we’ve been continuing a legacy that’s already been here at Grand Caverns,” Shank said. “There’s already been a legacy of mapmaking and a lot of research, but this is really exciting stuff. ... It’s on a whole ‘nother level.”

JMU has an “unparalleled” undergraduate research opportunity, Shank said, that focuses on cave and karst science. In spring 2021, Garcia and a couple of his students began work to map and create a 3D model of the caverns. Garcia has also given presentations to his peers internationally, discussing features at Grand Caverns.

Because Grand Caverns is the oldest show cavern in the continental United States, the “heritage” is already there, Garcia said. He said he contributes most to the project by developing a research program and literature for the site.

“It is nice to have a strong research component, and you still have a formalized educational component,” Garcia said. “It cannot rely just on interpretation, and it needs to go above that and be more inclusive with the nearby community.”

Garcia said he researches how the caves were formed, their relationship with water and how sediments are formed. One thing that stands out about Grand Caverns, he said, is the more than 250 shield formations, created when calcite-rich seep water under hydrostatic pressure is forced from tiny cracks in a cave wall or ceiling.

His colleagues across the globe are stunned when they see the cave shields for themselves, Garcia said.

Garcia said exploring and researching Grand Caverns is an opportunity his students do not forget. He recalled a time when he was reviewing older documents, in which a British academic in 1807 described his time in the Shenandoah Valley. He described Grand Caverns as one of the most beautiful things he’d seen in his entire life, and wondered about there being bigger things inside.

“Right now, we know that Grand Caverns is not even close to being the biggest cave,” Garcia said. “But I think that [history] is something that is hard to replicate with all the caves in the area. ... They are unique, they are beautiful, they have a history, but [Grand Caverns] has a unique history.”

Researchers estimate there are more than 200 verified signatures of Civil War soldiers in the cave. Some portions of the cave were also used for ballroom dances and events, and weddings are still held in Grand Caverns to this day, Shank said.

Garcia said Grand Caverns staff is in collaboration with the United States Geological Survey for a rain-style monitoring station, and the University of Texas-San Antonio for paleoclimate reconstruction with stalagmites, where researchers try to understand past climates to find how stalagmite growth is successful.

Last year, a JMU student created a geological-focused interpretation tour and presented it to individuals touring the caves. At the end of the tour, people ranked how well they retained the geological and scientific information on the tour, and Shank said the results were outstanding. Grand Caverns staff have adopted that script as part of its tours, Shank said.

“It’s a wonderful cross-pollination that happens when you have these kinds of collaborations,” he said.