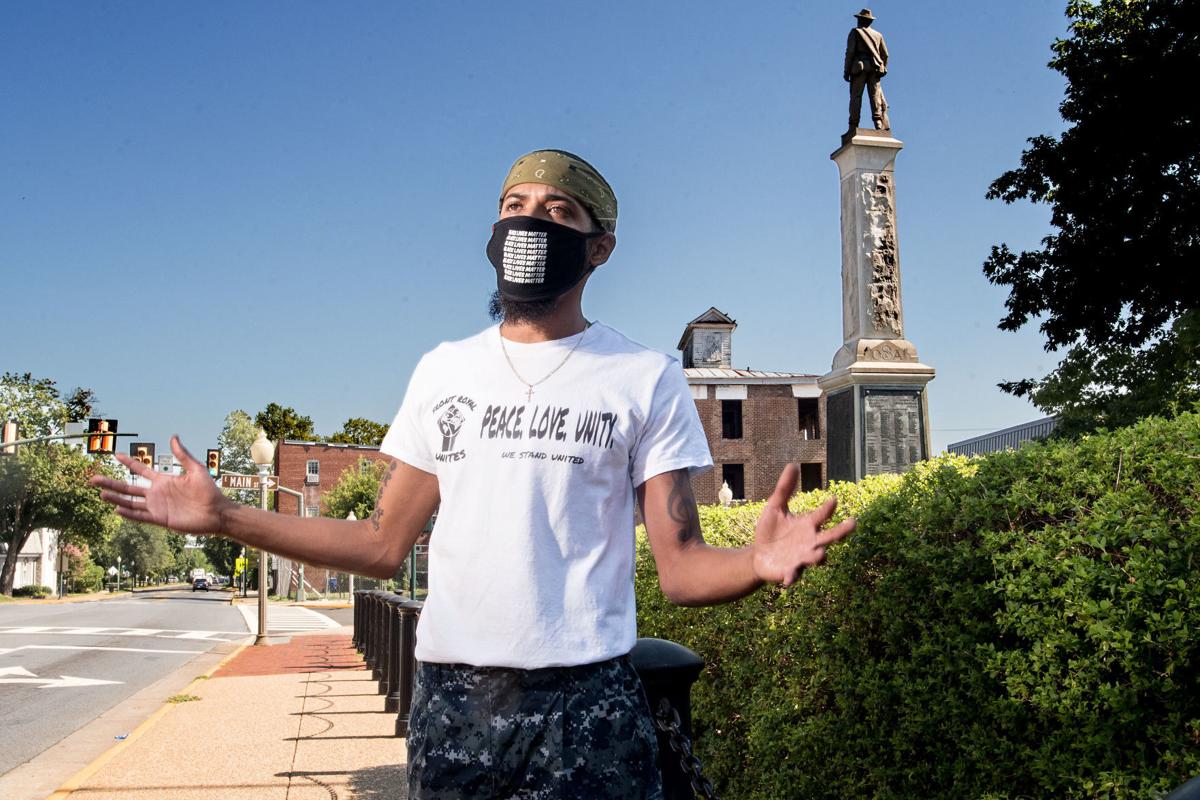 Samuel Porter, 26, founder of Front Royal Unites, wants the Warren County supervisors to remove and relocate the confederate monument outside the county courthouse. 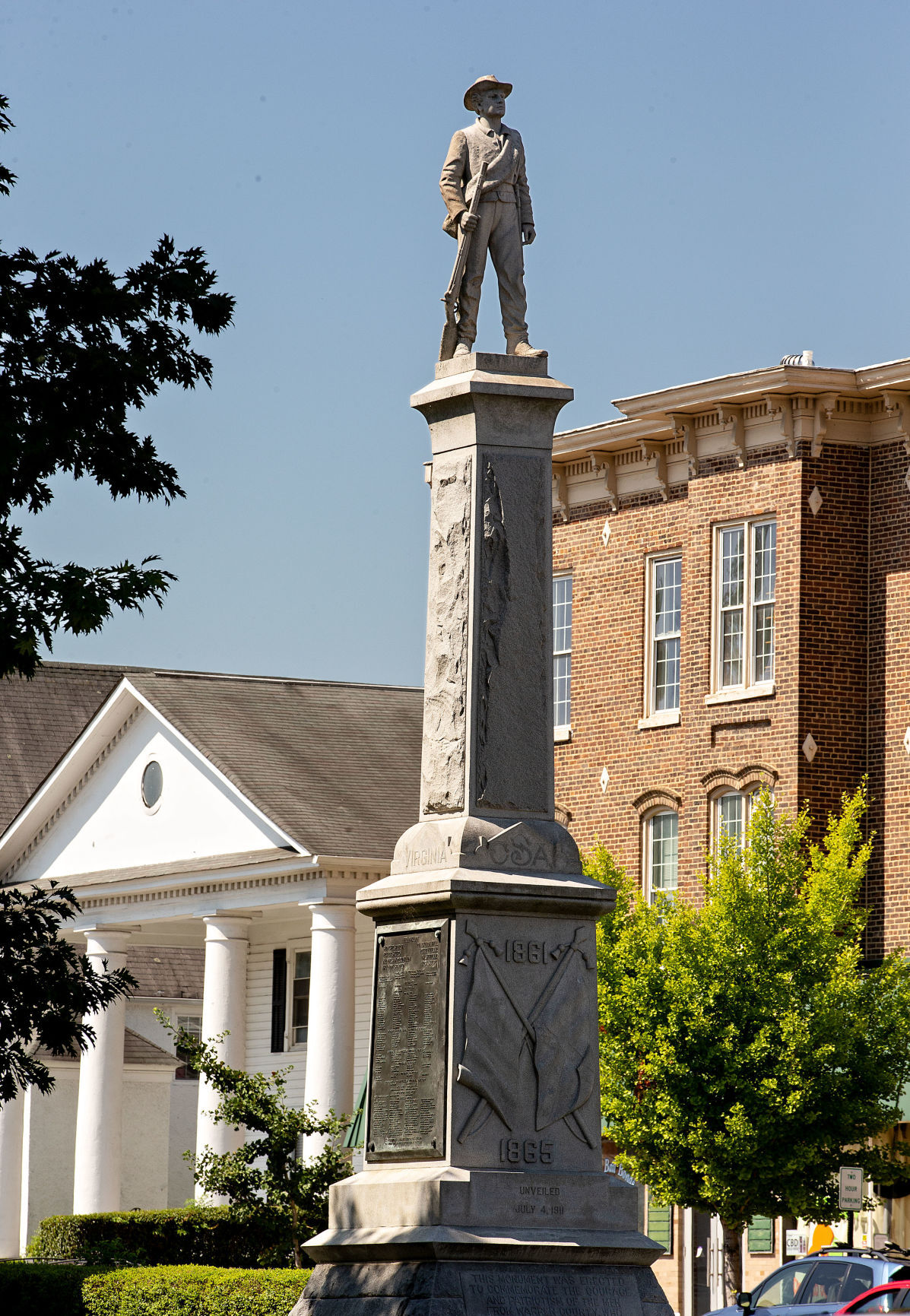 The confederate monument stands tall outside the Warren County Courthouse in Front Royal.

Samuel Porter, 26, founder of Front Royal Unites, wants the Warren County supervisors to remove and relocate the confederate monument outside the county courthouse.

The confederate monument stands tall outside the Warren County Courthouse in Front Royal.

FRONT ROYAL — Efforts have begun to remove and relocate the Confederate statue from the Warren County Courthouse’s lawn.

A petition with that stated mission was signed by 800-plus people three days after being posted at https://tinyurl.com/yydqs56y by Samuel Porter, co-founder of the Front Royal Unites activist group aiming to eradicate white supremacy. Another petition under a separate Facebook group, “Warren County United to Remove Confederate Statue,” is also circulating at https://tinyurl.com/y4yvm5e3.

Additionally, a petition with 800-plus signatures is circulating at https://tinyurl.com/yygymhl2 to keep the statue at its location, but Porter noted that petition was started about two weeks ago. Regarding how long it took for each petition to obtain their respective amount of signatures, Porter said: “I think that shows there is a lot more support for the removal and relocation as opposed to letting it stay.”

“I want to be very clear, removal and relocation does not equate to destruction,” he said.

The statue, according to Warren Rifles Confederate Museum employee Gary Duane Vaughan, was erected at the location by the Daughters of the Confederacy in 1911 and funded in part with donations from soldiers’ families. He added that rough financial times during the Reconstruction era rendered it impossible to erect the statue until then.

Vaughan added that the statue does not represent a particular person, but it is a nondescript portrayal of a low-ranking Confederate soldier.

An engraving on the statue, which lists the names of local Confederate soldiers, states that “this monument was erected to commemorate the courage and patriotism of the men from Warren County, who served honorably, in the Confederate army.”

Porter explained that while people should be able to pay respect to their heritage, “that heritage they rely on evokes everlasting trauma to people of color.”

Instead of standing on the courthouse lawn, Porter suggests the statue be relocated to perhaps the Warren Rifles Confederate Museum or the Prospect Hill Cemetery.

Vaughan noted that the Warren Rifles Confederate Museum does not have room for the statue. He also wondered if the cemetery would accept the statue and pondered who would fund its relocation.

When he sees the statue, Porter said he wonders why it has been allowed to stand for so long and why it must be at the courthouse. As a retired Navy veteran, Porter said the statue makes him “sick to my stomach” and that “it’s disgusting.”

“I damn sure laced up my boots to fight for the freedom we all enjoy,” he said.

Porter said that instead of commemorating a war that was fought to maintain slavery, a statue should honor veterans of a war in which freedom for all races was being fought.

While saying “we can debate about why the Civil War started day in and day out,” Porter pointed to an 1861 speech in which Confederate Vice President Alexander Stephens stated the Confederacy’s foundation includes “the great truth that the negro is not equal to the white man; that slavery, subordination to the superior race, is his natural and normal condition.” Porter also noted that Stephens said in that speech that slavery “was the immediate cause of the rupture and present revolution.”

Vaughan said that anyone who thinks the statue was intended to be a “slap in the face” has not conducted any “in-depth research.”

“They are just going on emotion and they’re going on the collective emotion around the country, a gang mentality,” he said.

Like most wars, Vaughan said the Civil War was about money. He noted that “before the war, the south was paying circa 80% of the taxes in the country because of exports and imports” and “the north was making a lot on the south and still wanting to tell the south what to do.”

Porter said that “of course economics were a big reason of the rebellion but slavery quickly made itself a spotlight point of contention for the Union and the Confederacy.” Even if a war was just “partly” over slavery, he questioned if such a statue should be erected “in the face” of those the Confederacy once fought to oppress.

Vaughan said that what he sees upon looking at the statue is “a tombstone commemorating those guys” who fought in the Civil War, “very few” of whom he said owned slaves. Citing letters written by local Confederate soldiers during the war, he said most of them fought to save their land, not to uphold slavery. He added that he can empathize with those vying for the statue’s removal but that it was never meant to be an insult.

Vaughan noted that another monument on the courthouse lawn memorializes local soldiers who died in the Vietnam War and questioned how long it will be before those of Vietnamese descent get upset and call for its removal.

Porter said that the petition “forces people to pick a side of history to be on” and that the statue “needs to go.”

For anyone wondering why the effort to relocate the statue is being made now, Porter said: “my generation, the new school, won’t and will not stand for nor tolerate anything that isn’t inclusive or a sponsor of white supremacy.” Based on the words of Confederate leaders, he said: “their ideals and missions were founded on white supremacy.”

“That statue is a symbol of that hatred in front of our public courthouse. Are Black people and other minorities supposed to receive justice in a country that allows such a thing?” Porter said.

He said Front Royal Unites will present the signatures to the Board of Supervisors by the end of August.