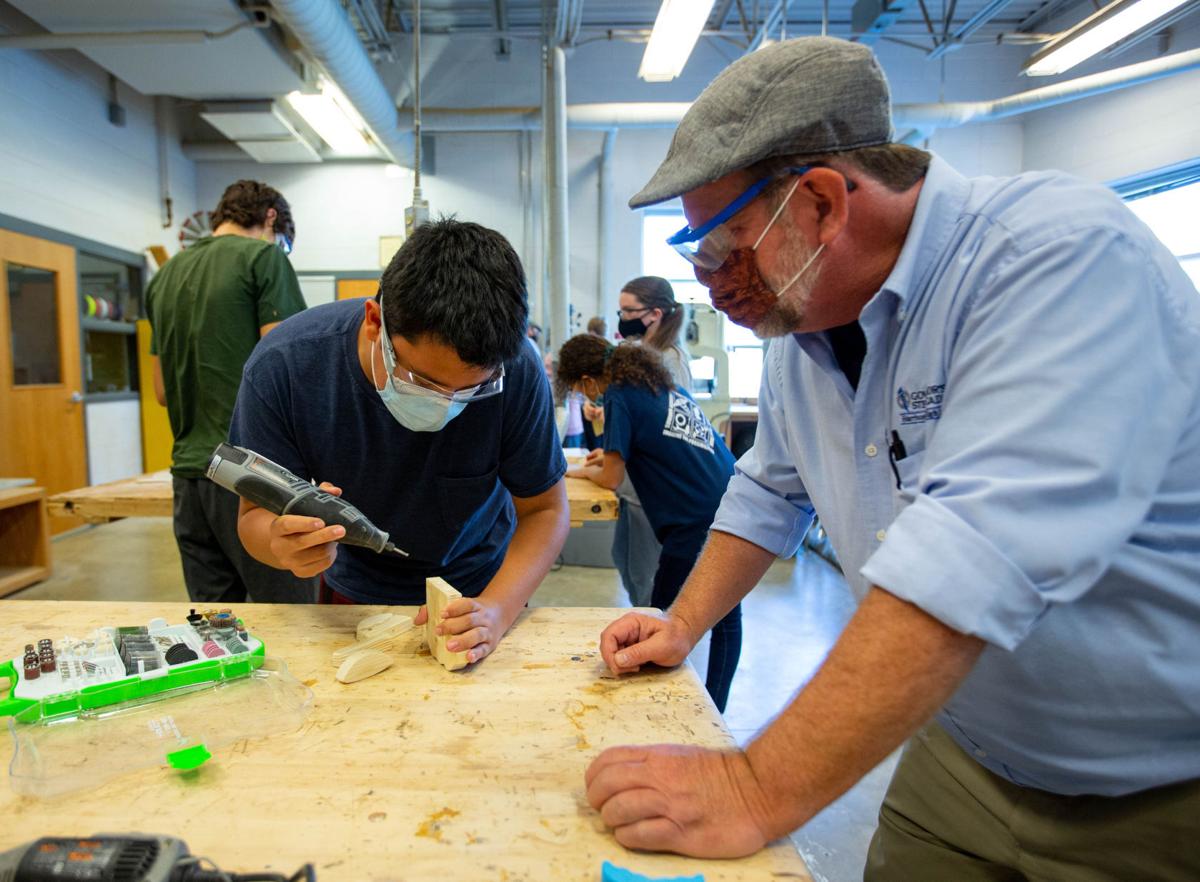 Andy Jackson, co-director of the Governor's STEM Academy at Harrisonburg High School, works with sophomore Kevin Vasquez-Rivero as his class learns how to use woodworking tools during an engineering class. 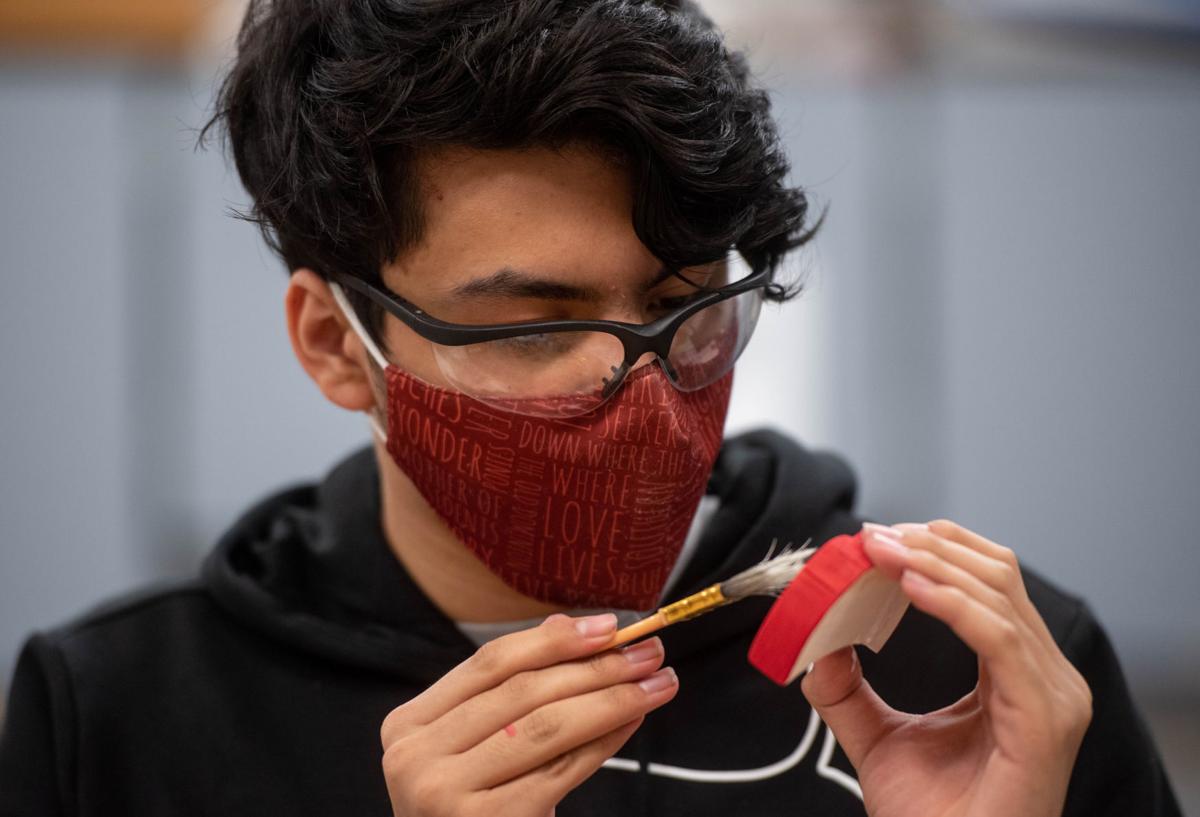 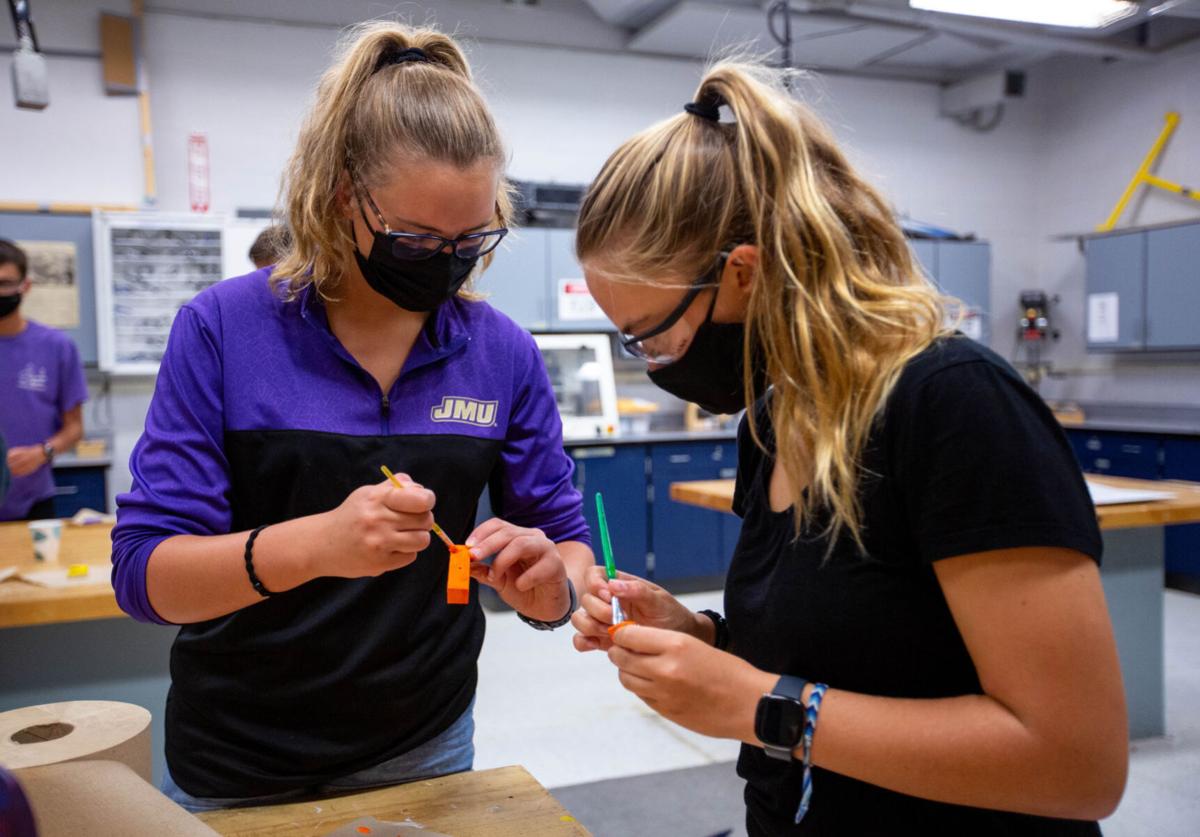 Andy Jackson, co-director of the Governor's STEM Academy at Harrisonburg High School, works with sophomore Kevin Vasquez-Rivero as his class learns how to use woodworking tools during an engineering class.

When Andy Jackson’s mother-in-law was approaching the end of her journey with Alzheimer’s disease, like most patients in her situation, she was often picking at things and using repetitive motions.

Jackson’s sister-in-law found a fidget device that is specially designed for people with dementia and Alzheimer’s. It was a wooden fish, separated into pieces and held together by elastic. It is colorful and visually engaging, as well as tactile.

Jackson, the Harrisonburg City Public Schools secondary science coordinator, co-director of the Governor’s STEM Academy at HHS and engineering teacher, used the fidget as inspiration for a project for his engineering students. Designing and creating the fidgets would be a real-world way of teaching students about safety and tools, a requisite objective for the classes.

The finished products will go to residents of Virginia Mennonite Retirement Community.

“Dementia and especially Alzheimer’s ... they get fixated on picking at and manipulating something,” Jackson said. “This keeps their hands busy and their minds occupied.”

Engineering students were tasked with designing their own fidget in whatever design they liked based off of the research that students read on the best design for a fidget for a person with dementia or Alzheimer’s. They then used tools and machinery to cut out their fidget, add any tactile design features, paint it and assemble it with an elastic.

Lucy Ludwig, a sophomore, decided to create a carrot fidget. Once side is painted orange with a green stem, just like a real carrot, but the other side is painted in rainbow hues.

“I read that the best compliment you can receive about a fidget is that it looks like something a toddler would like,” Ludwig said of her research into these therapeutic devices.

When researching toys that toddlers are drawn to, Ludwig found a food theme.

“With a carrot there are sections that you can see,” she said, making it a perfect design for a sectioned device.

Knowing that these fidgets will go to residents in the community, Ludwig said, the project is more meaningful.

“If I were just going to take it home, I might not have put as much thought into it,” Ludwig said. For example, she probably would have painted both sides of the carrot orange and green to resemble the real thing. But knowing that people who use these devices prefer bright colors, she took the time to paint one side in different colors.

In a different year, the students would have taken a day to deliver the fidgets to the residents of VMRC and would have interacted with them. However, with the ongoing pandemic, that is not possible, Jackson said.

He is hoping to set up a Zoom call between students and residents once the fidgets have been delivered.