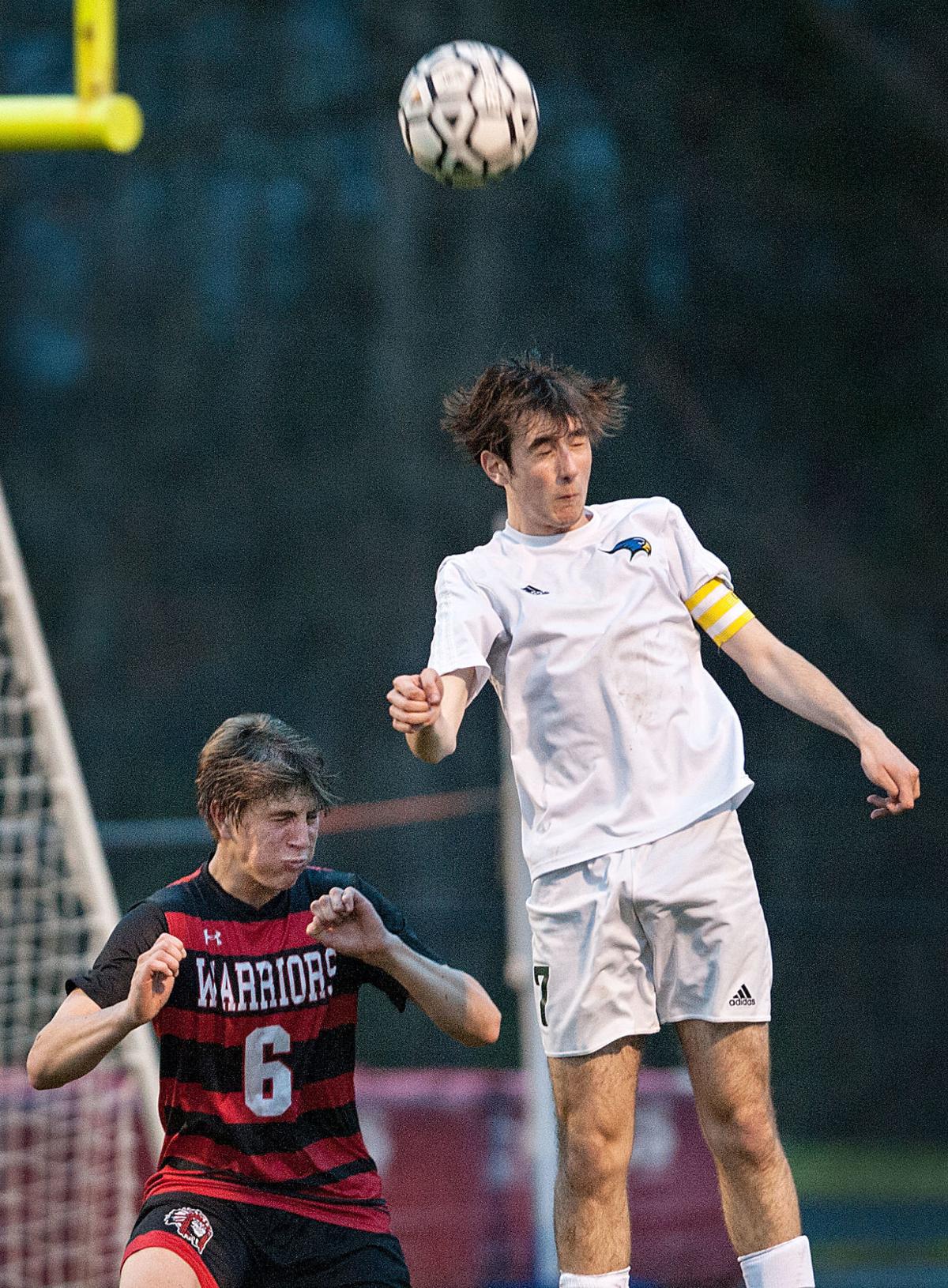 Skyline’s Charlie Carey heads the ball as Sherando’s Ethan Laing defends during their game last season. Carey is one of 12 Skyline seniors who showed strong leadership in the offseason.

Skyline’s Joseph Hillaert stretches out as he prepares to hit the turf after being tripped up during soccer action against Sherando last season. Hillaert is one of 12 seniors on Skyline’s squad this year. The team had high hopes before the COVID-19 pandemic ended the season.

Skyline’s Charlie Carey heads the ball as Sherando’s Ethan Laing defends during their game last season. Carey is one of 12 Skyline seniors who showed strong leadership in the offseason.

Skyline’s Joseph Hillaert stretches out as he prepares to hit the turf after being tripped up during soccer action against Sherando last season. Hillaert is one of 12 seniors on Skyline’s squad this year. The team had high hopes before the COVID-19 pandemic ended the season.

This was supposed to be a big year for Skyline’s boys soccer team.

“This year the senior boys they started preseason earlier than they ever have,” Steve Carey said. “They really took it on themselves to lead before the season officially started and for the three weeks we had of the season. They were setting the pace for the younger guys and really conveying what we wanted as coaches through them. They were self-policing. We didn’t have to worry about too much fooling around. They were taking care of themselves.”

Brothers Layth and Sayf Smadi said they enjoyed playing with the team and most importantly with each other over the years.

“It’s been fun,” Layth Smadi said. “We’ve learned from each other. We’re both brutally honest with each other and we give each other advice. We just learn from that. Like I think we’ve skyrocketed because he’s kept telling me so many times over and over what I’m doing bad.”

“It’s definitely nice because both of us have the chemistry together,” Sayf Smadi said. “We’ve been playing soccer with each other all of our lives. So we’re really comfortable playing together out there.”

Layth Smadi said it’s been special playing with the other seniors over the years.

“Honestly, I’m just so glad that everybody came out senior year,” he said. “We had so much depth on the team. We would’ve had a stellar season this year. We would have shocked everybody most definitely.”

Steve Carey said that Thompson was a quiet leader for the team.

“Drew Thompson is one of the quiet players,” Steve Carey said “He plays as hard and as long as we need him to. He’ll never say anything, he never complains.”

Hillaert has been a standout on the team for a number of years, and Steve Carey said that he was excited to see how he would have done his senior year.

“Joseph Hillaert has speed like there’s no tomorrow,” Steve Carey said. “We were planning on playing him up front, which would have been a change for him because he had played a lot in the back. But this year we were going to try him up front and unfortunately that never materialized.”

Steve Carey said Logan Lockhart was coming off an injury but had high hopes for what he could bring to the team this season.

Wilkins was also going to be a big part of this year’s team, according to Steve Carey.

Charlie Carey said he was excited to see what the team could do on offense this year, because they were working hard on improving it.

Charlie Carey said it’s been special to have his father as coach the last few years.

“It’s great,” Charlie Carey said. “You learn more about him as a coach. He taught me pretty much everything I knew about soccer. So just for him to be there since day 1 was just great.”

Layth Smadi said he will either be attending Shenandoah University next year or Lord Fairfax Community College and he hopes to at least play club soccer at either school.

Charlie Carey said he wants to continue playing soccer and it’s a sport that has taught him a lot about life.

“The biggest thing I’ve learned is team building, not focusing on yourself,” he said. “Not everything is about you scoring goals. It’s about the team as a whole and winning as a team.”