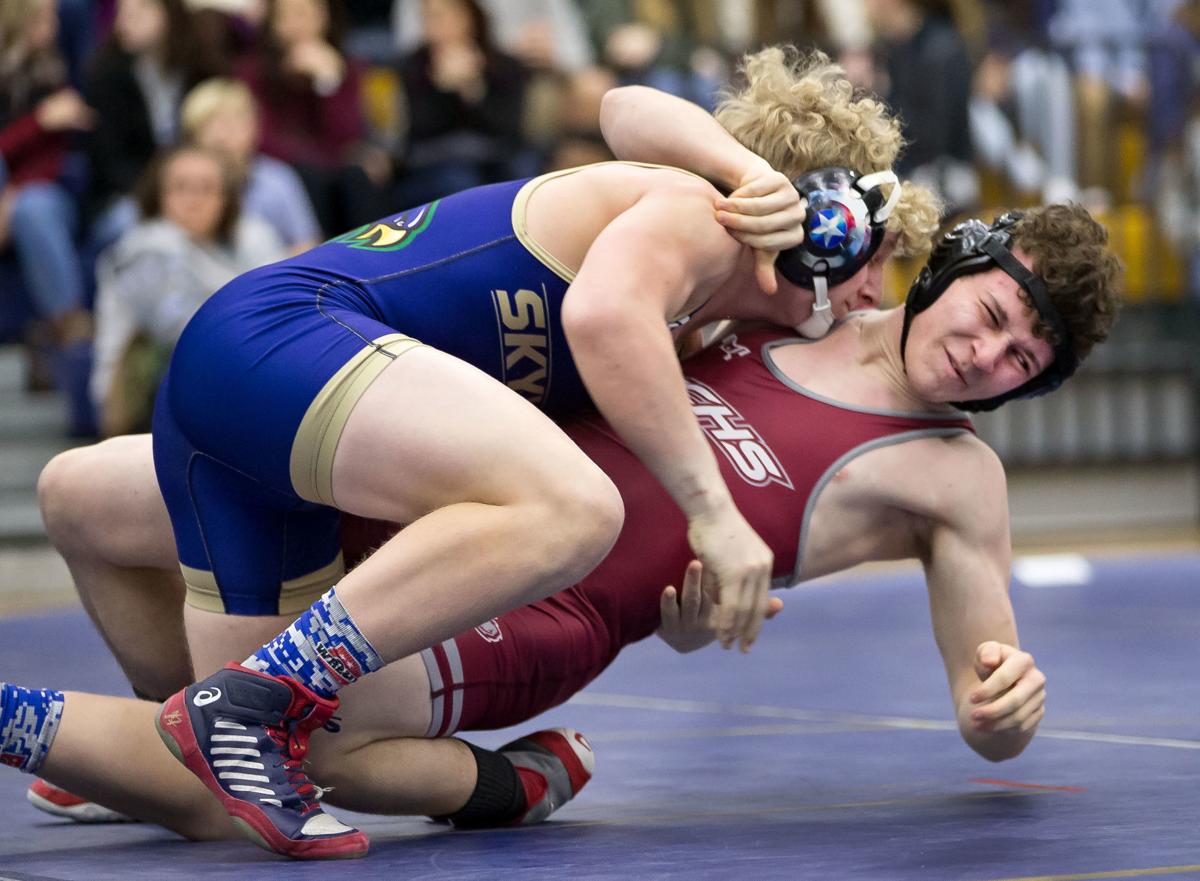 FRONT ROYAL — Skyline’s wrestling team has been aiming high all season long, and junior Tyler Davis said the Hawks’ have been “all business” in the practice room since Day 1. With the postseason officially here, it sounds like the Hawks are zeroed in as they hunt the program’s first regional title this weekend.

“It’s a whole different type of energy,” Hawks senior Anthony Domino said on Tuesday. “The whole team, I can tell, is ready to go. From the moment we walk in (to the wrestling room), to the next morning when we walk into school, we’re ready to get after it.”

Spots in next weekend’s Class 3 state tournament are up for grabs — the top four finishers in each weight class at the regional tournament move on — and so too is the regional championship trophy, something the Hawks have never gotten their hands on.

Skyline, the regular-season Class 3 Northwestern District champ, is in prime position to win the Region 3B tournament this weekend. The Hawks topped Brentsville — last season’s regional champ — and Warren County in head-to-head duals this season. They are coming off a wildly successful — and challenging — regular-season schedule and put nine of their 14 wrestlers among the top two seeds in their weight classes in the regional field.

Warren County, which won back-to-back regional tournaments in 2017 and 2018, is hoping to be in the mix again when the dust settles on Saturday evening, but Skyline and Brentsville are the teams to beat this weekend.

“I think it’ll be neck-and-neck with us and (Brentsville) there, but I think a lot more pressure’s on them,” said Hawks head coach Kyle Symons, whose Skyline squad placed second behind the Tigers in last year’s regional tournament. “They were able to win last year and they beat us by about 20, so we weren’t close enough to really make anything happen with them last year. But these guys have proven we’re a formidable team and had a really good regular season, 23-1 (in duals) and did really well in all the individual tournaments we were in. We’re hoping that carries over, and if it does, I think we’ll be in pretty good shape.”

Skyline’s goal is to send all 14 of its wrestlers to the state tournament, something the program has never done.

“I think most of our guys are gonna be right in a position to be able to do that, it’s just a matter of we might have to win a match somewhere where we might not have before,” Symons said.

Davis, who won previous titles at 106 and 113 pounds, said the key to postseason success is the mental part.

Domino, who won a Region 3B title at 145 pounds last season, is the No. 3 seed in this year’s 152-pound bracket. Domino suffered losses to Warren County senior Isaiah Frame — the bracket’s top seed — and Brentsville’s Matthew Basala two weeks ago.

“The sweetest thing in life to me is revenge. Things that happen during the season, me losing to them, it means nothing if I beat them at this tournament and get a better seed at states. It doesn’t faze me too much, but of course I’m looking to beat everybody,” said Domino, who is on the same side of the bracket as Basala and wouldn’t face Frame until the championship bout, should he make it that far.

“Previous matches definitely help, in my opinion, especially during the year. You learn from your mistakes, you learn what they do, what you can do to counter. And they’re doing the same things, so it makes for a better match all around.”

Longtime Warren County head coach Matt Wadas said the Wildcats have approached each postseason over the past few years with a “win and advance” mindset to each match after a humbling experience in the Bull Run District tournament several years ago.

“That’s done well for us the past couple years,” Wadas said. “This year, again, we are the underdogs. We’re a little bit more inexperienced. Skyline’s got a great team. Brentsville’s got a great team. But it’s not like we’re eighth or ninth or tenth. … Even with a little inexperience, we’re right up at the top. Who knows if a guy gets knocked off here or there. If we just worry about our job, maybe we’ll have a chance to be in the mix.”

Becker has never won a regional title but no longer has to worry about Brentsville’s John Carayiannis, who beat Becker for the regional championship in 2018 and 2019 but is competing at 132 pounds this season.

“I definitely want to win it,” Becker said. “I think I have enough experience right now to actually go through with it. The past two years I was stuck behind Carayiannis from Brentsville, who’s gotten second two consecutive years at states. He’s very good, but luckily we got placed at different weight classes this year. Looking at my schedule, I think I’ve got a pretty good chance of going through it this year.”

Veteran grapplers like Becker could be a useful asset for a Warren County squad that lacks postseason experience.

“We’re doing our hardest to really showcase what exactly they’re gonna expect there from the regional tournament,” Becker said of getting the Wildcats’ younger wrestlers ready for the weekend. “Of course, we’re going into the postseason, we’re doing some of our postseason activities, like we had our singlet day that we do every year where we compete in the room, and then we have our team-bonding activity where we do the whole hair (dyeing) thing. In terms of advice for actual regionals, I’m trying to pass off as much as I can to them and Isaiah and Aidan are doing the same thing.”

Wadas added that because of his team’s youth, this season’s regional tournament is about more than chasing podium finishes and state spots.

“Obviously another big factor for me is trying to get some of these kids experience because we are so young,” he said. “So next year they come back and a lot of my kids if they don’t make it, they can say OK, I know what the regional tournament is. It isn’t big, bad and scary. It’s just another tournament.”

Central, a team loaded with first-year varsity wrestlers, has seven grapplers entered into the Region 3B field. Only two of those wrestlers — freshmen Isaac Dodd (106 pounds) and Odane Dodd (160) — have winning records this season and are seeded fifth and fourth in their respective brackets.

Falcons head coach Greg Stickles said after the Big Red Invitational at Riverheads on Jan. 25 that he “definitely” saw the Dodds placing in the top four at the regional tournament.