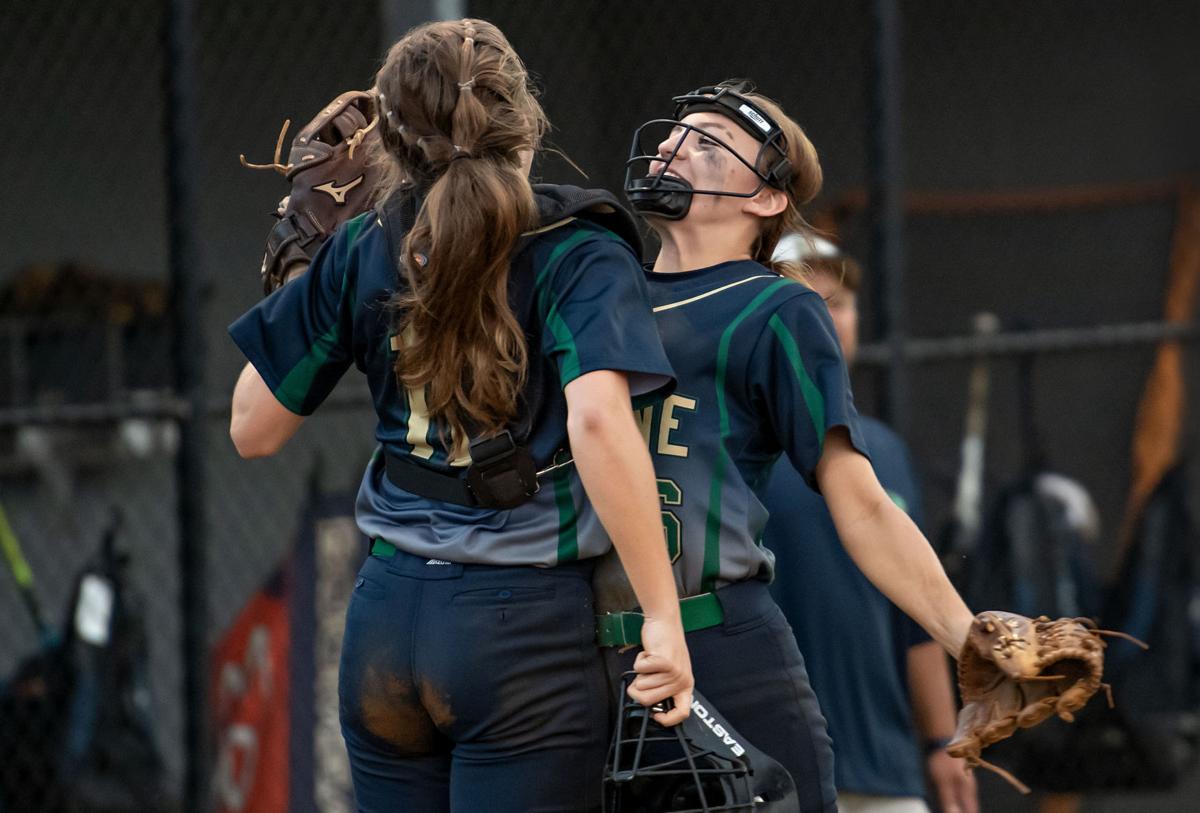 Skyline catcher Jillian Shannon, left, and third baseman Olivia Lacombe, right, celebrate the final out of their Region 3B quarterfinal game against Central with a chest bump Monday night in Front Royal. Skyline won the game 7-3. 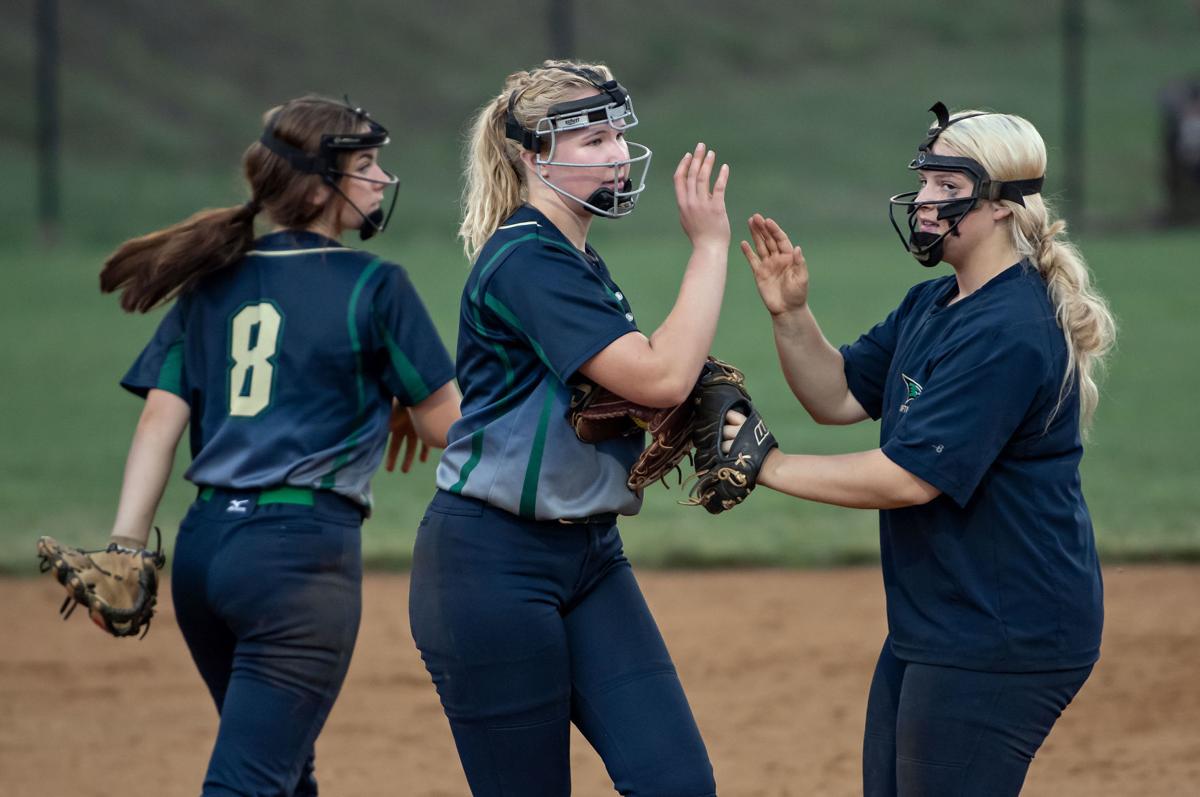 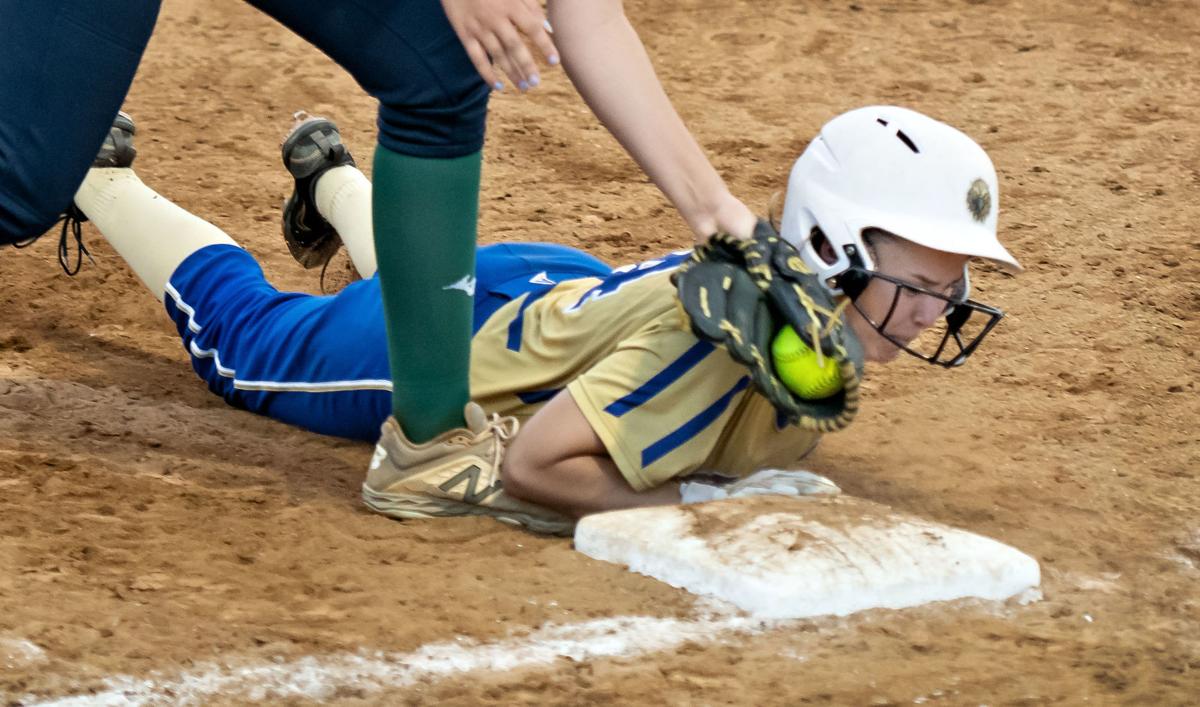 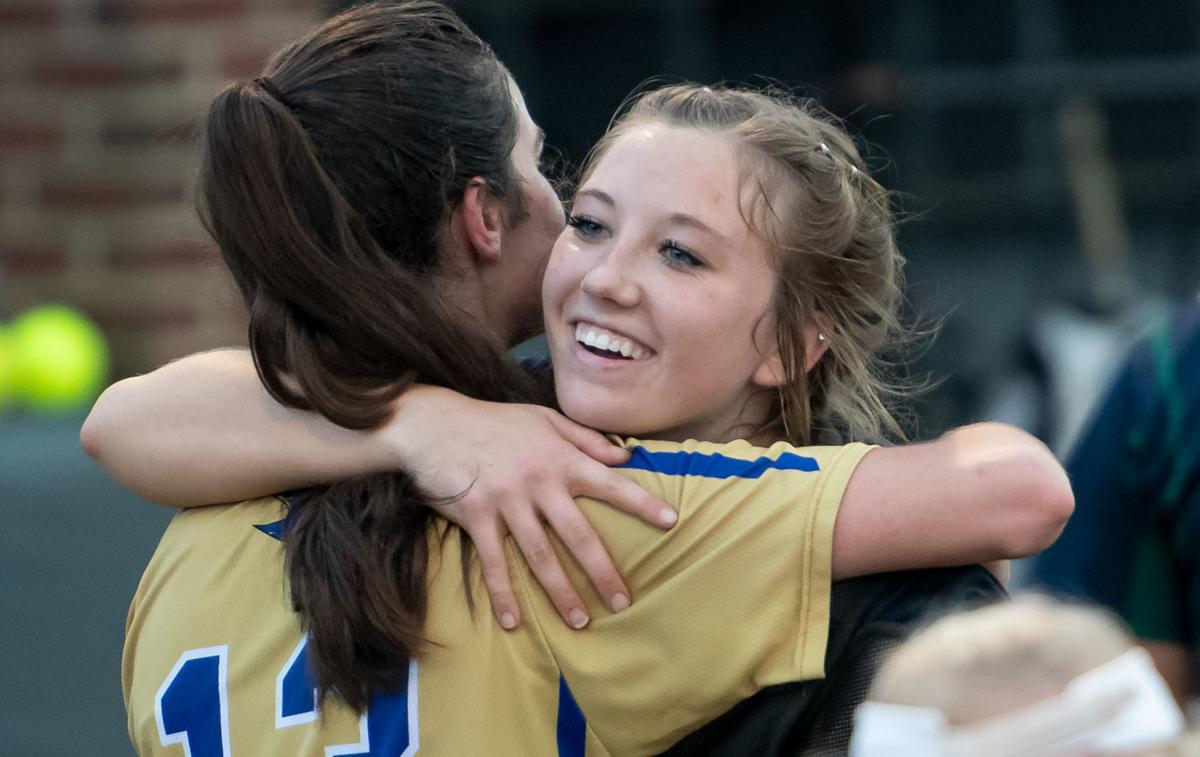 Skyline catcher Jillian Shannon, left, and third baseman Olivia Lacombe, right, celebrate the final out of their Region 3B quarterfinal game against Central with a chest bump Monday night in Front Royal. Skyline won the game 7-3.

Though Skyline had swept the regular-season series against Central, and despite the fact that the Falcons entered the postseason as the lowest seed in the eight-team regional field, top-seeded Skyline couldn’t ignore the talent Central was going to put in the pitcher’s circle and wasn’t about to overlook its first-round opponent.

Central looked like a team ready to play postseason spoiler on Monday night, but Skyline recovered from an early deficit and fended off the Falcons for a 7-3 win that sent the Hawks into Wednesday’s regional semifinal clash with cross-town rival and tournament four-seed Warren County.

“It wasn’t an easy win at all and we knew that going into it,” said Clatterbuck, who was 2-for-3 with a home run, double, three RBIs and two runs scored in the victory. “We had to come in prepared and not take them lightly, and that’s what we did. And it worked. We hit really well.”

The Falcons (5-8) got the start they needed on Monday night when they staked themselves an early lead against a team that had run-ruled them last time out. Walks by Alexis Clark and Trynda Mantz set up Alicia Ball’s one-out RBI single off Skyline starter Peyton Kaufman in the top of the first inning, and Ivy Mongold’s run-scoring fielder’s choice made it 2-0 before Skyline finally got out of the inning.

“I didn’t sense any panic or anything,” Clatterbuck said of the Hawks’ mood after falling in an early hole. “We definitely got a little bit worried, but we didn’t let our composure down, and that’s really what kept us going.”

Skyline (12-1) came up with a quick answer in the bottom of the first inning. Ashton Spiker (2-for-4, double) singled on a sharp liner to center off Mantz with one out in the Hawks’ first at-bat, and after Grace Benson drew a walk, Clatterbuck crushed the first pitch she saw for a three-run home run to right-center that gave Skyline a 3-2 lead.

The Hawks tallied all seven of their hits and all seven runs off Mantz in the first three innings. Central head coach Scott Mongold, whose team gave up 12 runs to Skyline in their last meeting on May 27, reiterated on Monday that the Hawks have a knack for making pitchers pay for mistakes and added that Ritter’s softball teams are “notorious” for playing better the next time you face them.

“Trynda, she didn’t pitch bad at all,” Ritter said of Central’s sophomore right-hander, who tossed four innings and struck out four while walking one. “Scott and them have got a good team. You can’t take nothing away from them and their pitching. We got a couple good hits when we needed them and some bunts down when we needed them, and that’s what you’ve got to do. We did it very well tonight and I was glad to see that.”

Kaufman, meanwhile, settled in after her rough first inning and retired 10 in a row after giving up a leadoff single to Bailey Spiggle in the top of the second. The sophomore right-hander tossed all seven innings for the Hawks and allowed three earned runs on six hits, five walks and a hit batter while striking out seven.

“I think she got a little bit nervous in the beginning, had a few walks,” Clatterbuck said of Kaufman, “but she didn’t let it affect her and that’s what she’s doing really well this year, is keeping her composure.”

Skyline gave its starting pitcher additional support in the second inning by making Central pay for a wild pitch on strike three that allowed Kendall Morris to reach base safely with one out. Morris aggressively took two bases on Tiara Ford’s sacrifice bunt and scored on Astoria Free’s two-out RBI single into left.

The Hawks added three more runs in the third, a spurt that began when Clatterbuck doubled, Jillian Shannon reached on a bunt single and Olivia Lacombe was plunked to load the bases with one out. Kiley McGuire snuck a two-run single past a drawn-in infield, and a wild pitch allowed another run to score to give Skyline a 7-2 lead.

Central threatened to chip into that lead in each of the final three innings but mustered just one run while stranding seven runners in that stretch. The Falcons loaded the bases in the sixth, but after Ella Toothman’s RBI single that cut the deficit to four runs, Kaufman picked up a strikeout and a pop-out to the catcher to prevent further damage.

Central put two on in the top of the seventh before Kaufman ended the game with her seventh strikeout.

“The hitting’s come around a little bit, but now we didn’t have the key hits,” said Mongold, whose team struggled to score runs for most of the truncated season. “A couple key hits there and it’s a totally different ballgame.”

Senior left-hander Alicia Ball kept Central in it by firing two scoreless innings of relief. She struck out two and walked two and didn’t allow a hit.

While Skyline advances to play Warren County — who the Hawks beat twice during the regular season — on Wednesday for a spot in the Region 3B championship game, Central’s season came to an end.

“We were playing our best softball at the end,” said Mongold, whose team had won two straight — including a victory over William Monroe — heading into the tournament. “Absolutely, if you look at the stretch that we’ve been on and even the games that we’ve lost in that stretch that we’d been on, we were playing our best softball. And as a coach that’s all you can ask of your girls, is the fact that they show up every day and they get better. And that's what I honestly believe happened. I honestly believe that my girls came, put in the work, and at the end of the day they got better.”