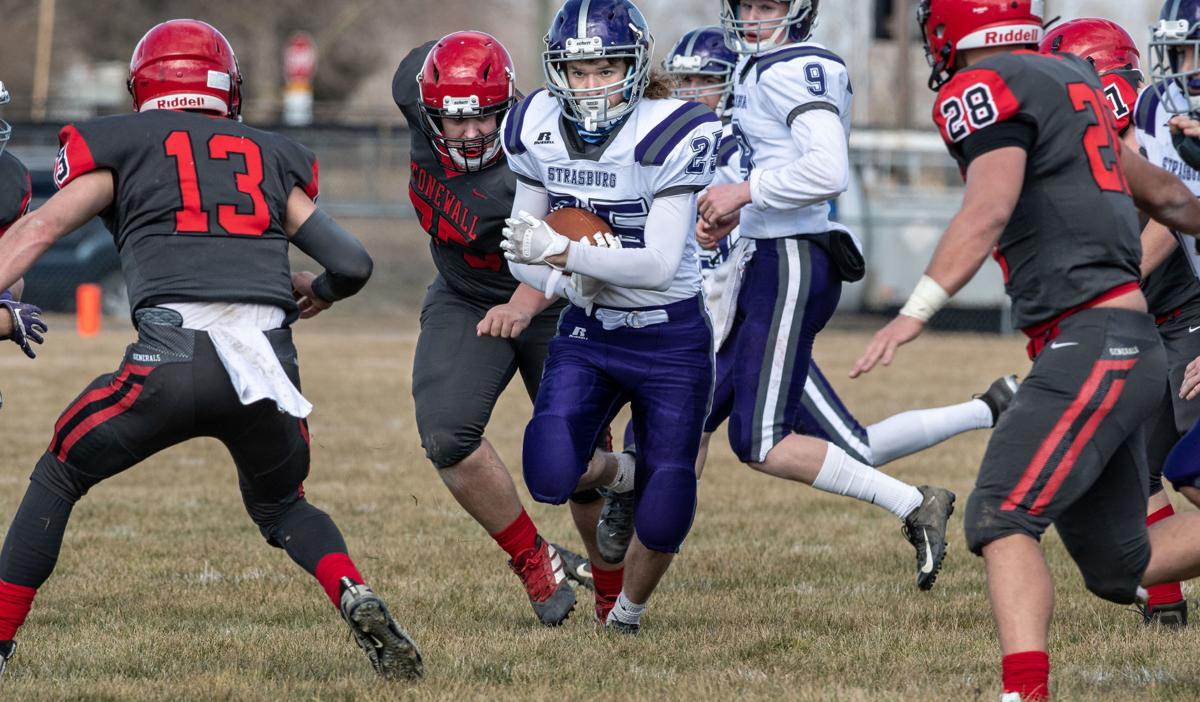 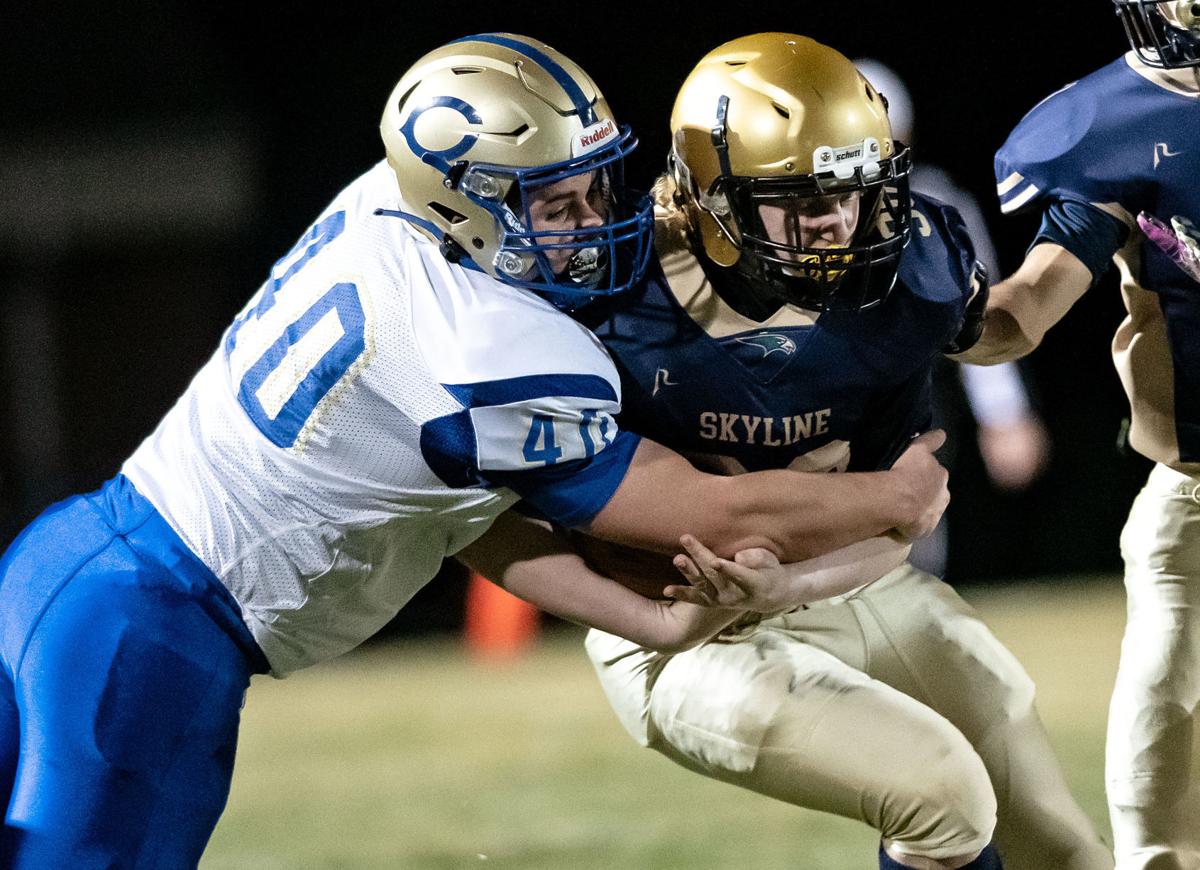 On paper, Skyline and Strasburg are in similar positions as the two teams prepare to square off in Friday’s football season opener in Front Royal.

Both were playoff teams last spring who won their respective district titles, and both experienced tremendous roster turnover heading into the fall season as graduation swiped most of their starters. Each team is hoping to learn a bit more about itself when the opener kicks off at 7 p.m.

“They have some guys that got some playing time, probably a lot more playing time than what our guys got, so they’re probably a little bit ahead of us,” Strasburg head coach Mark Roller said this week, “but we just want to see what we can do. And of course we’re playing up (against a Class 3 opponent) and that factors into some things. … It’s one of those things, you’ve just got to play the cards and see what happens.”

For Skyline, the goal is to maintain the momentum that was built during the preseason. Senior receiver/defensive back Ethan Caperton said the Hawks improved from each of their two scrimmages — a feeling shared by head coach Heath Gilbert — and added that the Hawks want to see “that the effort that we’re putting in in practice is translating into the game.”

Skyline and Strasburg last played in 2018 (a 28-3 Ram win at home), and the Rams look a bit different than the last time the teams met after having switched to the T-formation in 2019.

It’s no secret what Strasburg wants to do on that side of the ball.

“They’re gonna run the ball,” Caperton said. “That’s their game plan. They want to run it down our throats and we’ve got to get ready for it and stop it.

“You’ve just got to be aggressive,” he added, “know your keys and when you see where the ball is you’ve got to attack it because they’re trying to get 3 yards every single play.”

Junior quarterback Ryan Roller, the head coach’s son, has taken the reins of Strasburg’s offense this fall after splitting some time there in the spring. Senior running backs Tanner Jenkins and Brady Neary received some carries last season but are playing featured roles at the position for the first time, and varsity experience outside of that trio is slim. Senior offensive lineman Tyreese Lee is the only player who started a game offensively for Straburg last season.

Mark Roller said he wants to see his squad fix the “little mistakes,” like pre-snap penalties, that could put a young team into tougher situations on the field.

“I’d just like to see everyone get their blocks,” Jenkins said. “Us just running through the right holes and (setting) the right blocks. That’d be a great thing for us to just get down as soon as possible.”

Despite Strasburg’s youth, Gilbert expects a challenge from the Rams’ offense and said the Hawks need to visually read their keys to avoid getting caught out of position.

“If the guard pulls, we need to see it,” Gilbert said. “If the tight ends release — one of the weapons … is their big tight end (6-foot-6 sophomore Walker Conrad). He does a really good job of catching the ball and making plays afterward. He can high-point it. He’s dangerous. The running backs all showed on film the ability to break tackles and go the distance after doing that, so it’s gonna be a challenge.”

Mark Roller said Skyline’s defense includes “several good guys” that “really worry us,” adding that the Rams would pass the ball if necessary.

“We’re probably 80-20 (run-pass) as far as that goes but we’ll throw it a little bit if we have to, and I think that’s the good thing about our offense is that it’s so deceptive that you can stick in some big plays throwing the ball,” Roller said. “We’ve just got to make sure that we’re in the right spots when we run the ball.”

Skyline, like Strasburg, is inexperienced along its offensive line and lost some key offensive weapons from a season ago, but does feature some skill players who have already established themselves at the varsity level.

Caperton started at quarterback last spring after senior Blake Appleton went down with a torn ACL, and versatile running back Aidan Vaught saw significant action as a freshman last season. Appleton, who passed for over 2,000 yards and 25 touchdowns as a sophomore in 2019, is back at the helm of Skyline’s offense.

“He’s a pretty good quarterback,” Roller said. “He does a good job of getting rid of the ball, he throws it well. For us, that’s gonna be an issue of us taking care of defending the pass. We’re gonna have to get some pressure on him and make him throw it a little bit earlier as opposed to letting him sit back there and pick us apart in the secondary.”

Skyline’s offensive line looks the part but experienced some growing pains during the preseason, Gilbert said, adding that the linemen took a collective step in the right direction in the Hawks’ second scrimmage.

Gilbert is hoping that Skyline’s practice limitations due to the heat — the Hawks spent much of the week indoors — don’t have an adverse effect in preparing for a Strasburg defense that he said is “gonna challenge us.”

“They’re gonna put eight guys in the box. They’re gonna make you be tough enough to run it against them. It’s certainly a challenge,” Gilbert said, noting that the Rams use a lot of pre-snap movement on its five-man defensive line that could create confusion for Skyline’s inexperienced linemen. “That could hurt us. Hopefully we’ve done well enough to prepare them this week, even if we haven’t been able to put pads on.”