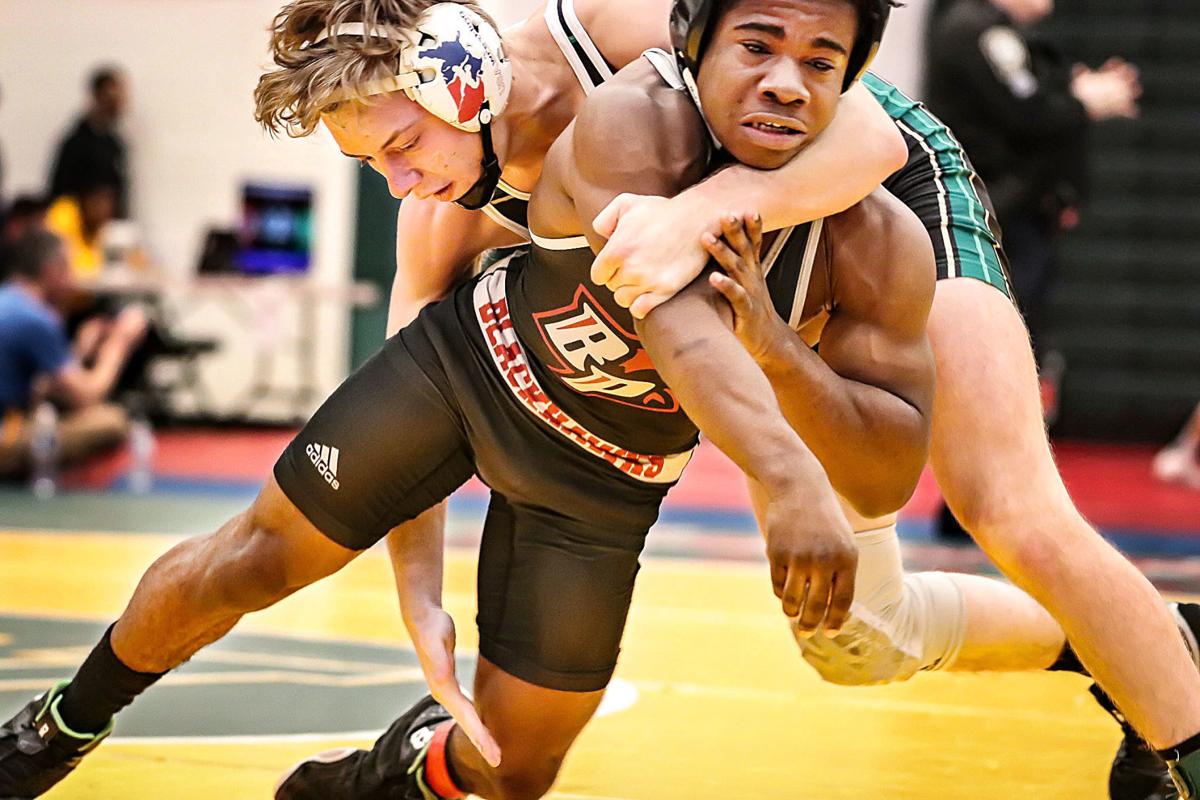 Skyline senior 138-pounder Morgan Robinson (top) controls Brooke Point's Justis Bell during the championship match at the Battle at the Bridge tournament in Woodbridge on Dec. 28. Robinson won the match, 3-0. 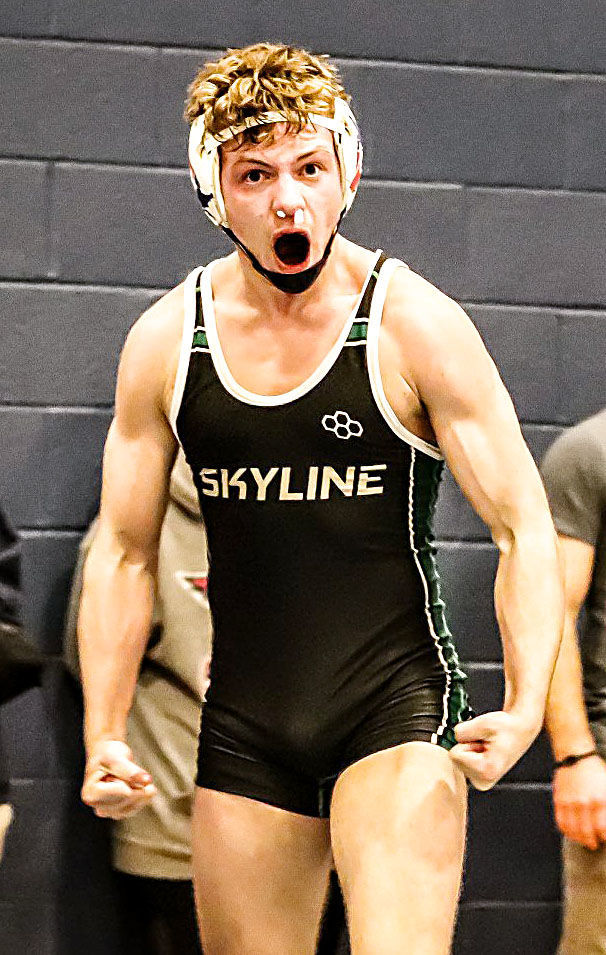 Skyline senior 138-pounder Morgan Robinson (top) controls Brooke Point's Justis Bell during the championship match at the Battle at the Bridge tournament in Woodbridge on Dec. 28. Robinson won the match, 3-0.

FRONT ROYAL -- Two matches during the first half of the wrestling season showcased the biggest change Skyline’s Morgan Robinson has undergone during his senior year.

The first came in the Hawks’ initial outing of the season at the Elite Opener at Washington (West Virginia) High School on Dec. 7. In the 138-pound championship bout against Clement Woods of Mount St. Joseph (Maryland), Robinson was clinging to a slim lead and weathered a late push from Woods to hold on for a 6-4 victory.

It was a result that Skyline head coach Kyle Symons probably wouldn’t have expected from Robinson a year ago, he said a month later on Monday. Had that match taken place during Robinson’s junior year, Symons said, Robinson at some point would’ve reached his breaking point from a mental perspective and given up the lead in the third period.

Robinson himself said something similar about his semifinal match against Atlee’s Alex Frowert in the Battle at the Bridge at Woodbridge High on Dec. 28. Though the margin in that bout was much more comfortable -- Robinson won 17-6 (and he’d later win a championship there as well) -- Robinson said Frowert was relentless even while down big in the third period, a factor that would’ve caused Robinson to “crumble” in previous seasons.

Instead, the new version of Robinson ignored the “noise,” the hand-fighting that was accomplishing little more than serving as a potential nuisance, and he stayed focused. Symons would say later that he’s never seen anyone wrestle Robinson harder for six minutes than Frowert did that day, but Robinson found a way to pile up 17 points despite not being the aggressor for the final three or four minutes of the match.

At a sparkling 26-0 heading into the Virginia Duals in Hampton this weekend, Robinson has done a lot of winning this season, and he’s got a brand-new mindset to thank.

The winning part isn’t new to Robinson -- he’s won at least 43 matches in each of his first three high school seasons, and last weekend he became Skyline’s all-time career wins leader with his 5-0 romp through the Mayhem at Millbrook tournament. But holding a firm grip on a championship-caliber mindset is, and Robinson said it was the missing piece that was preventing him from putting it all together on the mat in past seasons.

“He’s put together the gas tank, the mental, the physical, all three of those things are together and it’s probably the first time in four years that he’s wrestled here that it’s been that way,” said Symons, who took over as Skyline’s head coach last season and has made mental toughness a priority for all his wrestlers. “It’s no real mistake that he’s 26-0 and that he’s dominating guys and not giving up a lot of points in most matches. But when he does give up points in matches, it doesn’t take him off the rails. He’s still focused on what he needs to do.”

That wasn’t always the case. Last season, Symons said, Robinson could be knocked off-kilter when things didn’t go his way. Even things like tweaking an ankle or a shoulder or a finger could derail Robinson for the rest of the day, Symons said, and possibly longer.

Symons said Skyline’s coaches worked hard with Robinson to correct those issues last season, and assistant coach Brian Scott, a holdover from former head coach Matt Keel’s staff who has a good relationship with Robinson, was the one often tasked with helping Robinson overcome those mental hurdles.

Skyline’s coaches have had no problems keeping Robinson laser-focused this season, his head coach said, and Robinson said he’s convinced himself to “stop giving up on myself, just keep telling myself I need to work hard if I really want to win.”

“Last year, and I’m sure before it was even worse, he was more … worried about looking good and trying to dominate in a flashy type of way than he was just wrestling, putting points on the board and keeping the pace up and dominating people,” Symons said. “Right now that’s what he’s doing, that’s all he’s worried about, and obviously that’s made a big change with him because the results are showing.”

Robinson, who had just a few high school tournament titles to his name entering his senior year, has opened the 2019-20 season with championship performances in the Elite Opener, Battle at the Bridge and Mayhem (for the third time in his career). He’s also had perfect jaunts through the Northwestern District Duals and the Appalachian Duals.

All of those wins are pushing him toward more success.

“It’s a boost,” said Robinson, who is 164-39 in his high school career. “When people lose they tend to go in the room and work their butt off, but me winning is what’s actually making me work even harder too at the same time because it’s like ‘OK, this is paying off. Keep doing this and if I keep it up, I’m gonna keep winning.’”

And it isn’t just that Robinson is winning. He’s doing so in dominant fashion, with 18 of his 26 victories this season coming by pin. Entering the season, 55 percent of Robinson’s career wins in high school came via pin; that number is at 69 percent this winter.

“The coaches have kind of made me a little bit less of a wuss by just beating the crap out of me every day,” Robinson said. “That’s definitely true. That’s what’s really getting it going, just me getting my butt beat by coach Scott and coach Symons every single day just made me not react softly. It made me go out there hard and focused.”

Skyline has never had a four-time medalist at the Class 3 state tournament, a feat Robinson would achieve with a top-six finish in Salem in February. (Teammate and fellow senior Brandon Ahlemann, Skyline’s starting 132-pounder, can also accomplish that this winter, and junior Tyler Davis is chasing that feat as well.)

Interestingly enough, Skyline’s winningest wrestler has yet to win a high school postseason tournament. Robinson has never left a district, regional or state tournament with a gold medal, which he said goes back to his past struggles with his mindset.

“It was mental. It was me not being fully there or ready,” said Robinson, a two-time Region 3B runner-up who has not placed higher than fourth at the state tournament. “But I feel good now. I see myself winning it now.”

Asked what’s driving him, Robinson pointed to the local wrestlers -- like Strasburg’s Nic Campbell, a four-time state champ -- that he watched win their own state titles while he was getting ready to join the high school ranks.

“Watching them stand up in the state finals after winning a state title and seeing them scream, that’s what I want to do,” Robinson said. “I just want to be able to do that.”

To accomplish that, Robinson said he needs to keep working hard over the next month and “use the wrestling room to relieve your stress.”

“It kind of helps you practice hard. When you come in here it’s like nothing else is important, you just go in there and work hard, and that’s what’s gonna keep getting you better,” Robinson said. “It’s really just working hard. That’s all you can do, there’s no other way around it.”

Robinson’s flawless season record could be tested before the Region 3B tournament marks the start of the postseason on Feb. 14, with tournaments like the Virginia Duals this weekend and the WSAZ Invitational in Huntington, West Virginia in two weeks figuring to throw some stiff competition his way.

Symons said Robinson could take a few losses between now and regionals -- “And that’s fine,” he noted -- but added that Robinson just needs to focus on being the best version of himself come February.

“He comes in here, he puts in hard work, he comes in, he takes care of business on his live (drills), he takes care of business on his cardio, he takes care of his weight, he goes home, he goes to bed, comes back in here the next day and does it again,” Symons said. “Now, if we have a competition that day, it’s ‘go out and prove that I’m the best guy.’ Since he’s looked at it that way from a mental standpoint, he’s been tough to stop, and so far nobody has. We’ll see what happens here the rest of the year but he’s given himself a very good chance come February to do very, very well, and I think that he will.”