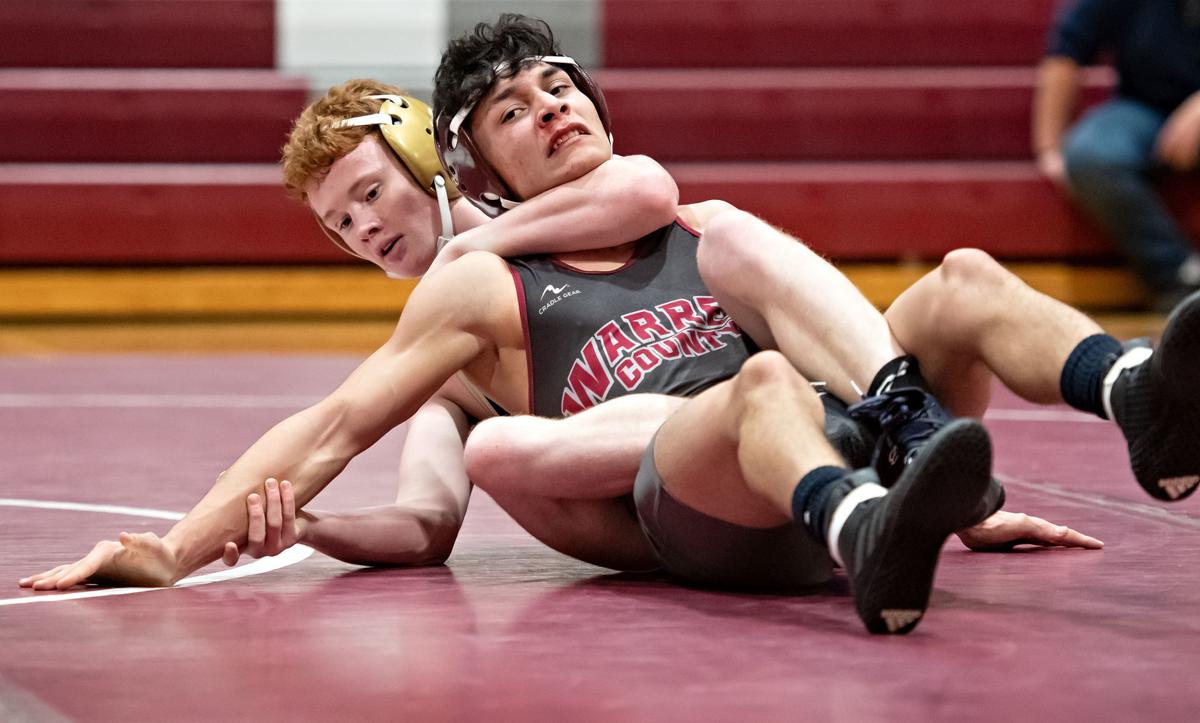 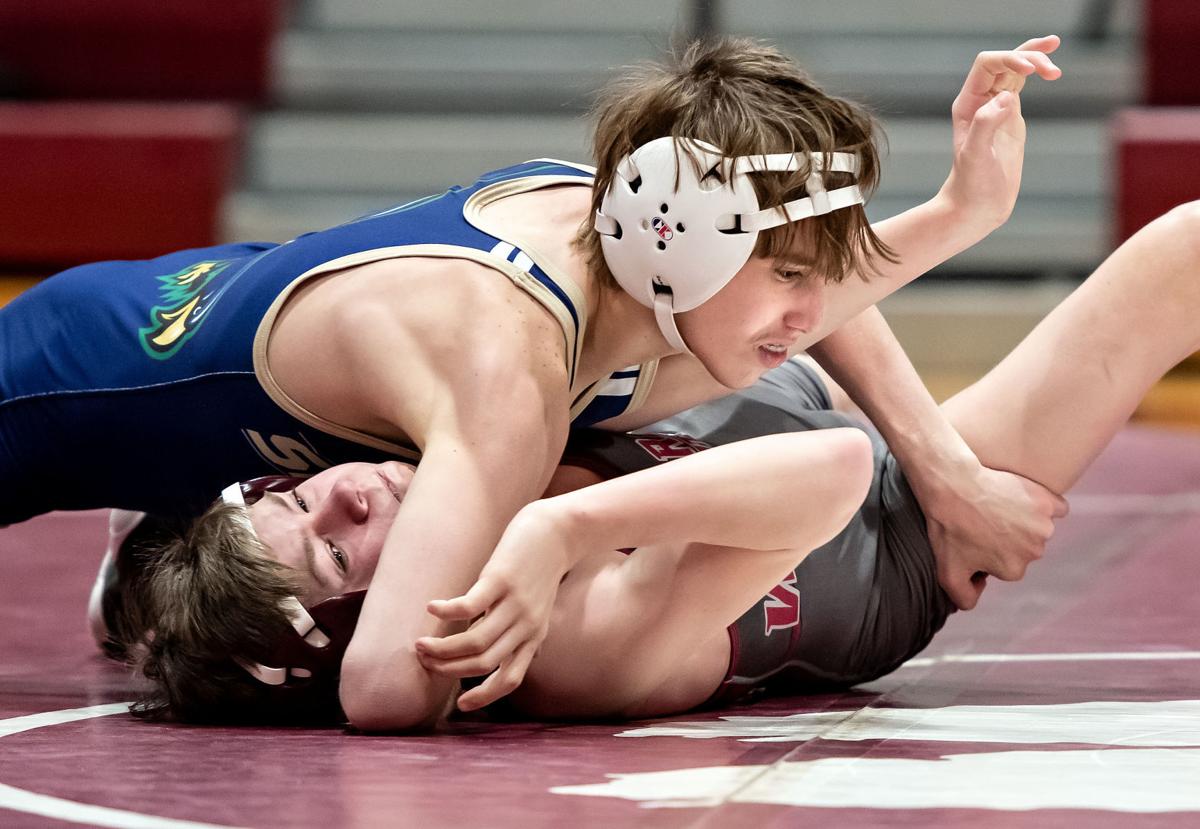 Skyline’s Ethan Asher has Warren County’s Dalton Ayers on his back in the 106-pound class. 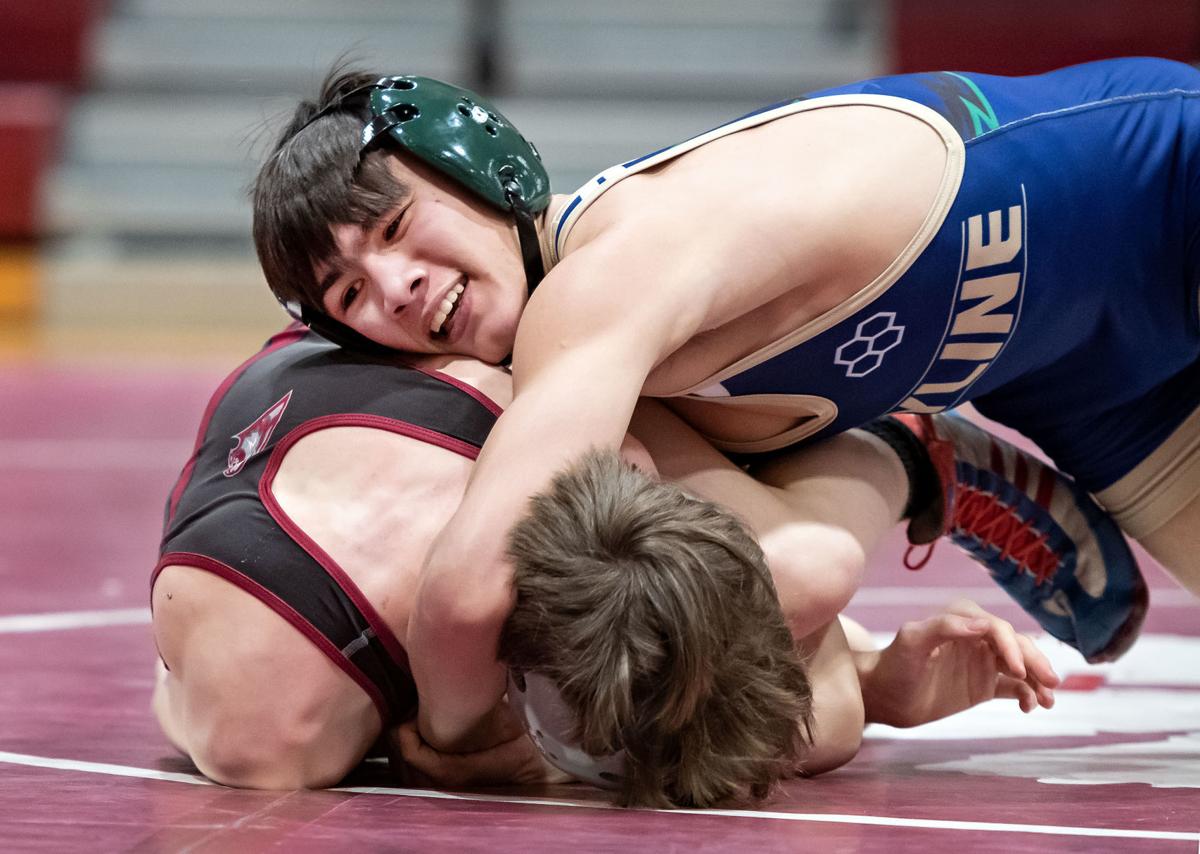 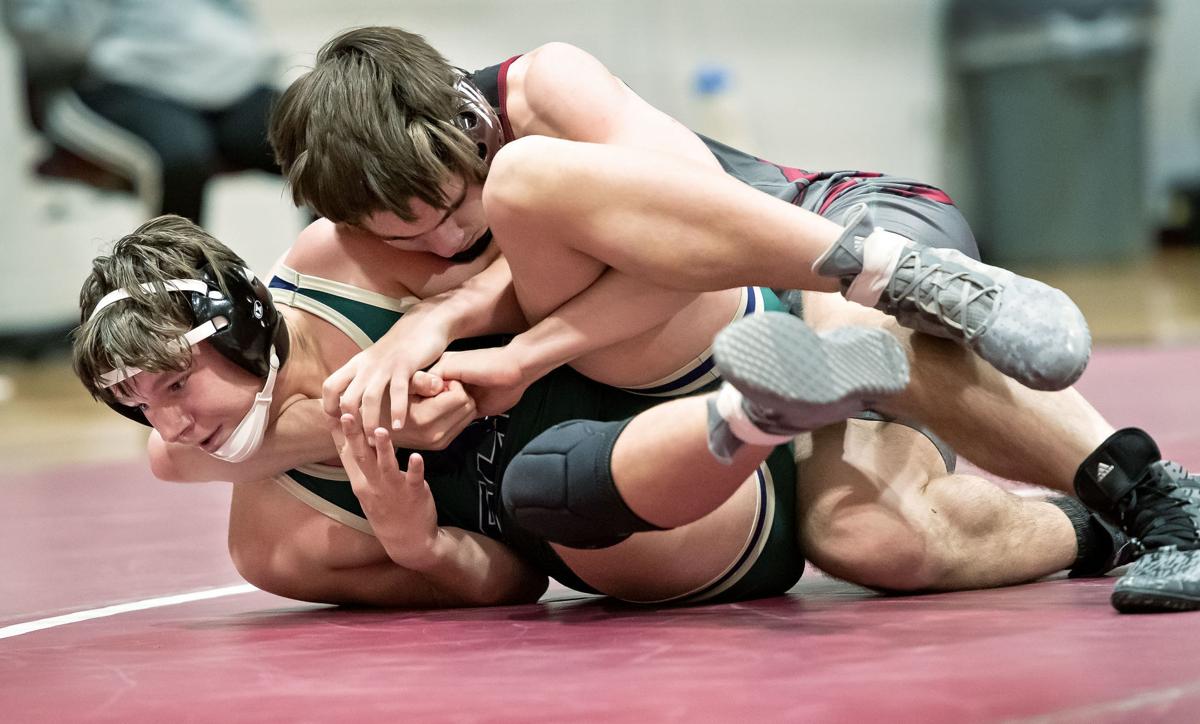 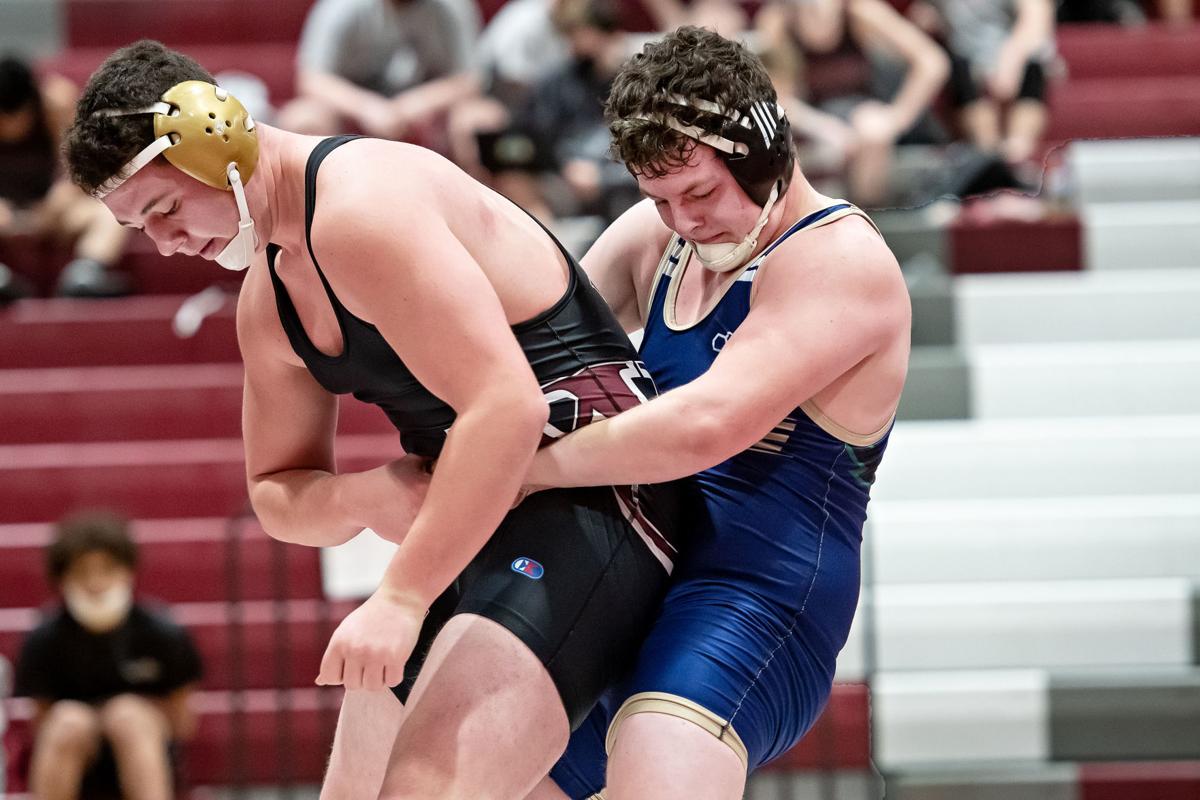 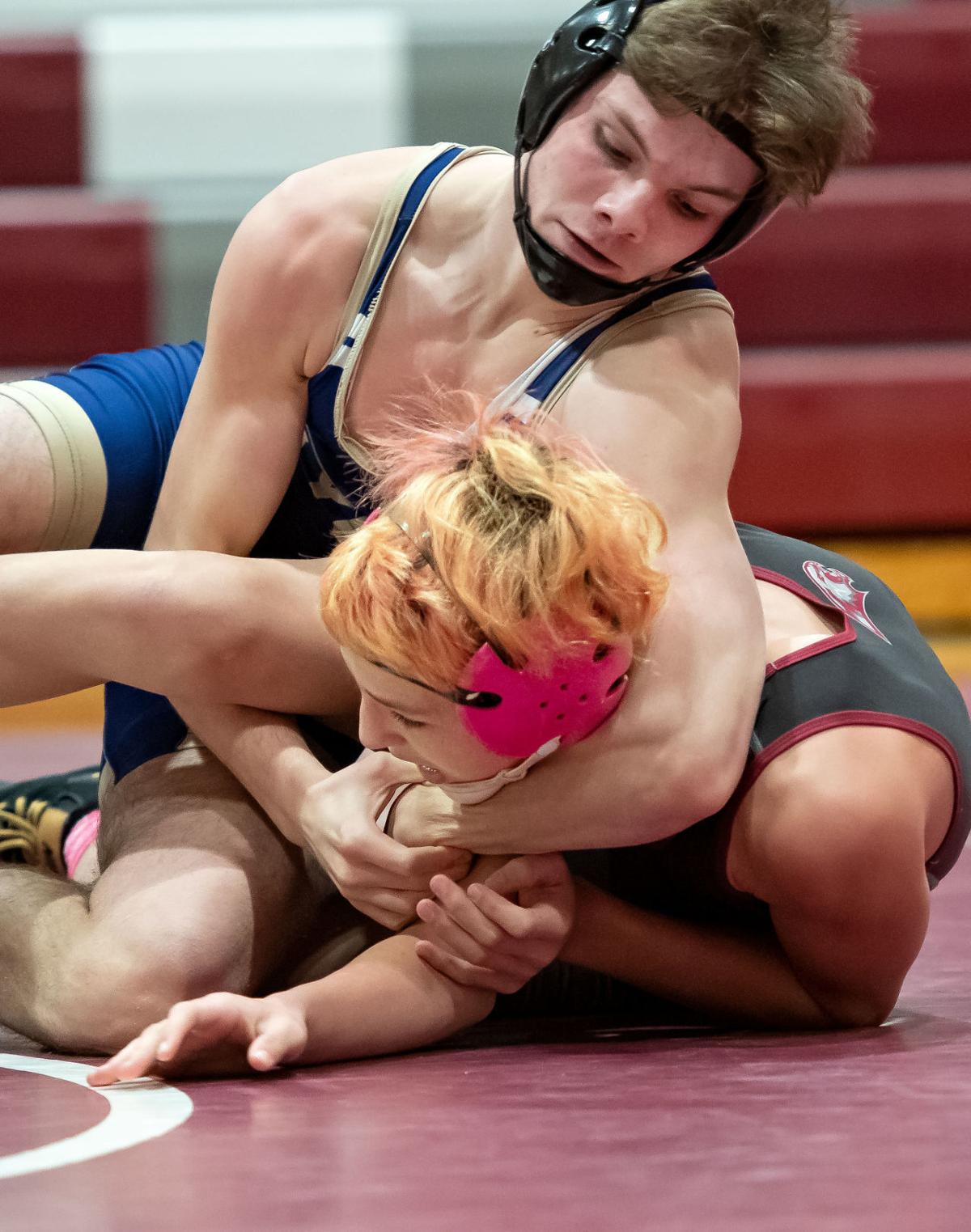 Skyline’s Tyler Davis gets Warren County’s Elijah Frame in a head lock in the 132-pound class.

Skyline’s Ethan Asher has Warren County’s Dalton Ayers on his back in the 106-pound class.

Skyline’s Tyler Davis gets Warren County’s Elijah Frame in a head lock in the 132-pound class.

FRONT ROYAL — Skyline’s wrestling team left the home of its cross-town rival with a Class 3 Northwestern District trophy, what the Hawks hope is just the beginning of a lot more hardware heading their way in the coming weeks.

Skyline remained perfect with yet another sweep of a four-team event at Warren County on Wednesday evening after trouncing the Wildcats (72-6), Kettle Run (68-4) and Handley (75-6) to move to 17-0 in duals this season. The Hawks’ opening win of the night earned them the district title and was the start of an impressive outing during which Skyline suffered just three individual losses the entire night.

“We’re all wrestling like the state tournament’s next week,” said Davis, who tied Morgan Robinson’s school record for career pins (107) on Wednesday. “… Practice is good. Everything that we’re working on is being shown on the mat.

“We’ve been trying not to look too far ahead,” he added of winning the district title. “District is what we’ve had our mind on, and then from then on it’s gonna be regions and then the goal is states. That’s what it’s been for a while. We’ve been working one thing at a time just like we always have.”

The Hawks rolled from the opening whistle, winning seven of their first nine bouts against Warren County by pin to build a 51-0 lead. Senior 170-pounder Brennan Komelasky was the only Wildcat to score a victory against Skyline when he pinned Hunter Pearson in 32 seconds.

Longtime Wildcats coach Matt Wadas heaped praise on Komelasky after Wednesday’s action for the body of work the senior is putting together this winter. Komelasky was the lone 3-0 performer for an inexperienced Warren County squad on Wednesday, though he didn’t wrestle a match after the opening dual thanks to a pair of forfeits from Handley and Kettle Run.

“He has just been the ultimate even-keeled kind of kid who’s just been working hard,” Wadas said. “He’s sort of a throwback to some of our older teams where he’s more experienced. He’s just embraced it. He hasn’t been frustrated that we have a younger team. He’s helping some of the rookies. He chimes in during practice. … I’ve got to give him a lot of credit.”

Warren County, wrestling in its only home event of the season, followed the blowout loss to Skyline with a 51-30 win over Handley – which forfeited five matches against the Wildcats – and a 55-24 loss to Kettle Run. It was the first time Warren County (7-5) had posted a losing record at an event this season.

Wadas said that though the Wildcats are young and inexperienced, they didn’t shy away from scheduling tougher opponents because that is what ultimately is going to make them better. Warren County’s losses this season have come to programs with traditionally strong wrestling programs, including New Kent, Liberty, Wilson Memorial and Skyline.

“It’s a situation where we just don’t get upset about it,” Wadas said of the losses. “We know what this year is. This year is a learning and growing year. It’s a crazy year. We’re just excited for the opportunity to wrestle, and everyone’s kind of putting an asterisk on this thing anyway so it’s like just get out there, wrestle and compete and get better.”

Wadas said there was “no shame” in losing to Skyline, which has state title aspirations with a loaded lineup this season.

“I’ve gotta hand it to Skyline, they’ve got a heckuva group,” Wadas said. “… I didn’t feel that rivalry this year. They feel a little bit like an all-area all-star team, which is weird. But we’ve just got to focus on us, we can’t focus on them.”

Skyline has a monster matchup on Saturday when it hosts New Kent, the two-time defending Class 3 state champ, in a quad that also features defending Class 4 champ Fauquier, which the Hawks have already beaten 45-18 this season.

“If you look at (Virginia Wrestling Association’s) rankings of the teams that are wrestling, they’re No. 1 in 3A and we’re No. 2 in 3A right now,” Symons said of New Kent. “It’s nice to be able to have that opportunity in a dual meet to try to prove if we’re better than them or not. We’ll see where we’re at. I feel like we’re ready. Our guys are ready to go and they’ve been ready for weeks for an opportunity like this.”