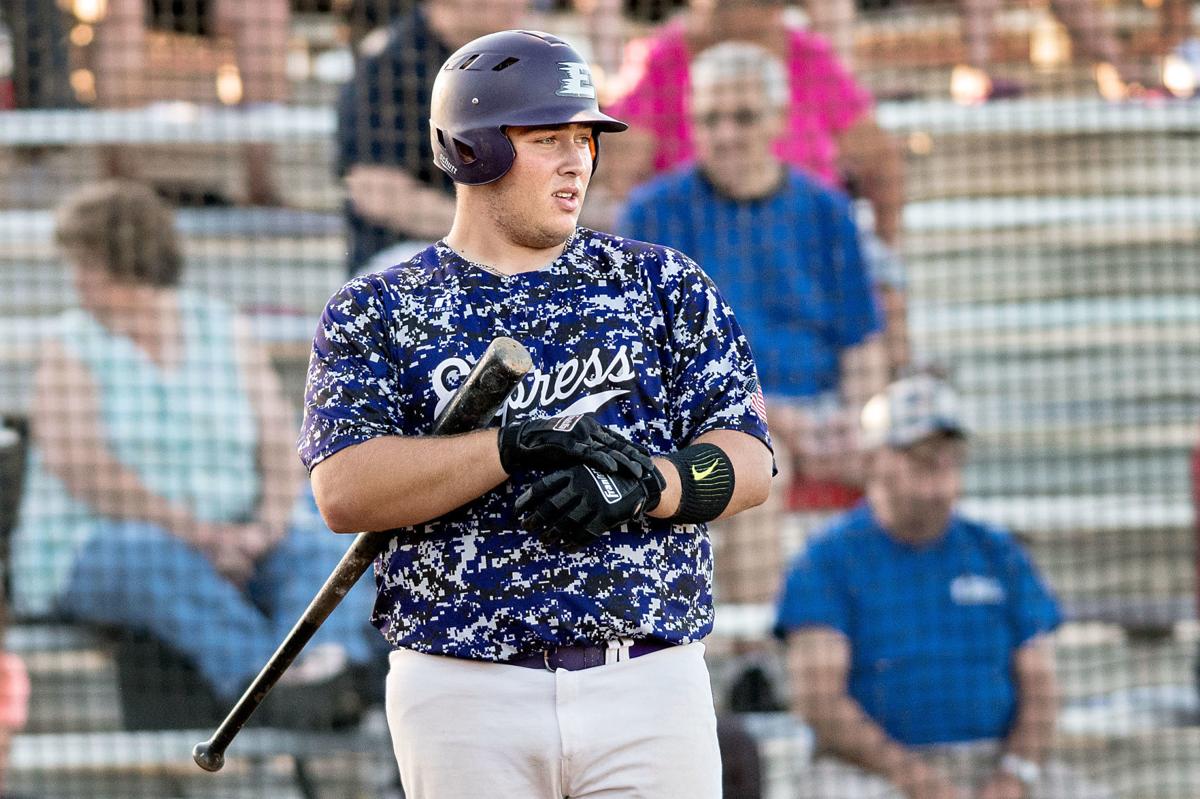 Strasburg’s Sonny DiChiara walks up to the batter’s box during Monday night’s game at Rebel Park in New Market. 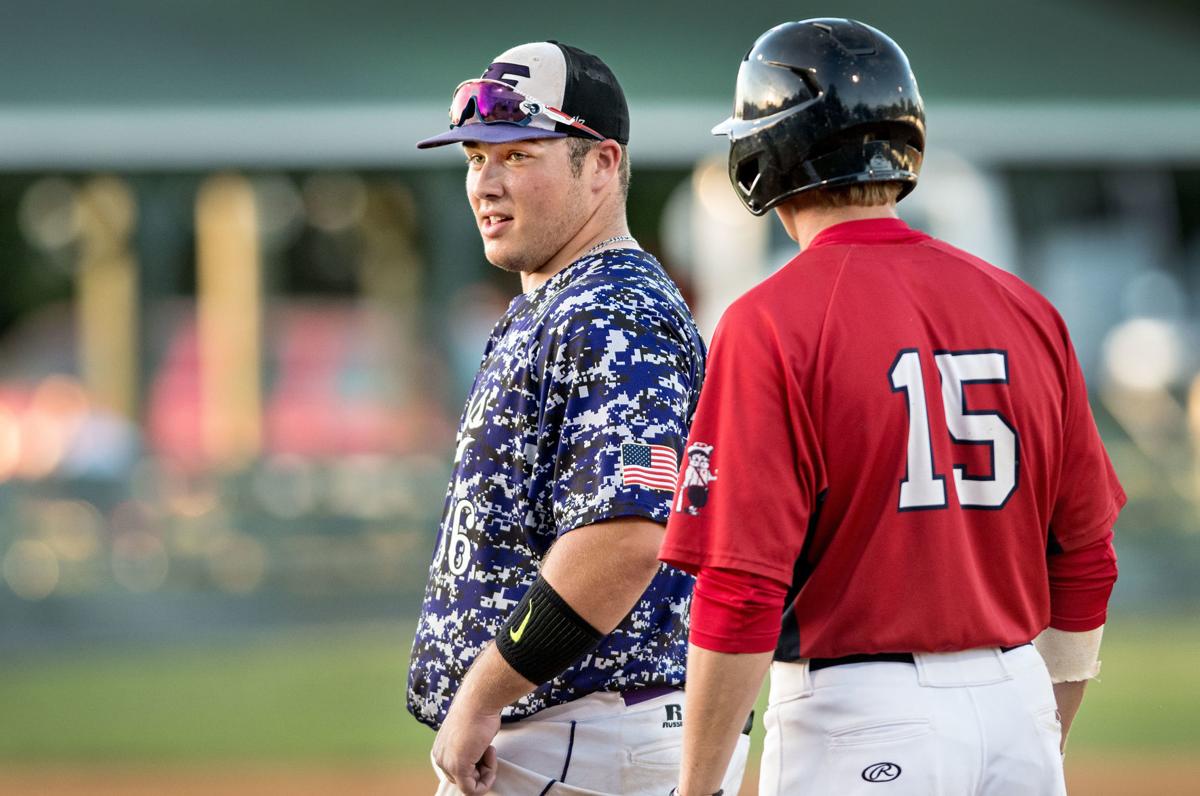 Strasburg’s Sonny DiChiara walks up to the batter’s box during Monday night’s game at Rebel Park in New Market.

STRASBURG – Sonny DiChiara took a tough break and turned it into a new opportunity.

Hoover, Alabama, is known for its storied high school football program. Like many in Hoover, DiChiara enjoyed playing football but after his eighth-grade year he had to have a surgery that ended his football career.

DiChiara had Chiari malformation surgery – doctors had to remove a small section of bone at the back of the skull to make room for part of the brain, the cerebellum and relieve pressure on the brainstem, cerebellum and spinal cord. DiChiara, who is playing this season with the Strasburg Express, said it was tough but without football he focused more on baseball.

“I loved football,” DiChiara said. “Football was awesome but obviously baseball worked out pretty good. I guess I’ll stick on that.”

Unfortunately, DiChiara wasn’t done overcoming injuries. He missed his entire sophomore year due to a back injury. Then in September of his junior year he had to have Tommy John surgery, which is ulnar collateral ligament reconstruction.

He was able to be the designated hitter for Hoover his junior year and the team won the Alabama Class 7 baseball state title.

“That was awesome,” DiChiara said. “That was the best feeling yet. Hopefully we can get a ring up here, too.”

His senior year of high school, DiChiara was finally healthy and he said it felt good to be able to play a full season healthy.

He said Hoover High School coach Adam Moseley was a big influence on his career.

“It was awesome to say the least, but I still got to get better,” he said. “I hit .293. That’s OK but not where I want to be. The 21 home runs is nice; that’s about where I want to be. But I got to work on the physical aspect and the mental aspect of the game, too. Hopefully, I’ll come back better.”

The 6-foot-2, 240-pounder plays first base and is used as designated hitter some for the Express this season.

He said that he no longer pitches, which allows him to focus on hitting.

“That’s been my thing, is hitting,” DiChiara said. “I’m hoping to start getting a little more balls out of the park the rest of this season. I’m at four now but 10 sounds better.”

“He’s got God-given hitting talent,” Moss said. “He’s just the type of guy that he understands who he is, what he can hit best and he’s got a really good approach at all times. He doesn’t really ever try to do too much per se. There are times he swings at a bad pitch but rarely is he a guy that gets fooled twice with the same pitch. He does a great job of adjusting. And he’s just a really good fundamentally sound hitter on top of just the God-given professional power that he has.”

At Samford, DiChiara helped lead the Bulldogs to a 41-19 record and the regular season Southern Conference title. However, the top-seeded Bulldogs lost in the conference tournament and didn’t make the NCAA Tournament.

DiChiara said that will just add fuel to the fire for the team for next year.

He said that he only had a couple days off before coming to Strasburg, where he’s also made quite an impact.

“The summer’s gone pretty good so far,” DiChiara said. “As a team, we’re doing just about everything right that we could. As an offense, our offense is starting to heat up. The first few games were kind of quiet but ever since then we’ve just been on fire. Hopefully we can keep it going.”

DiChiara is hitting .323 (30-for-93) with eight doubles, four homers and 26 RBIs. DiChiara will be playing in the Valley Baseball League All-Star game Sunday, which will be televised live on ESPNU at 7:30 p.m.

He said that some of his main goals is to get in better shape over the summer, get faster and cut down on his strikeouts.

DiChiara said it didn’t take long for the team to all become friends with each other.

“We became best friends real fast,” he said. “We joke around with each other. There’s no awkwardness. It’s like we’ve played together for 10 years.”

The Express are 18-6 on the season and lead the North Division by 5.5 games over second-place Woodstock. DiChiara said he feels like the Express have the best team in the league and he’s looking forward to the rest of the season.

DiChiara said like most players his ultimate dream is to play professional baseball and he’s trying to take the steps he needs to get there.

“That’s something I’ve really been thinking about,” DiChiara said. “As soon as I couldn’t play football anymore – that’s just been my goal. That’s what I wanted to do. That’s just been my goal. So hopefully if I get in better physical shape like the (MLB) scouts have been telling (Samford) coach (Casey Dunn)) and I’ll have a good shot. I’ll do my part.”