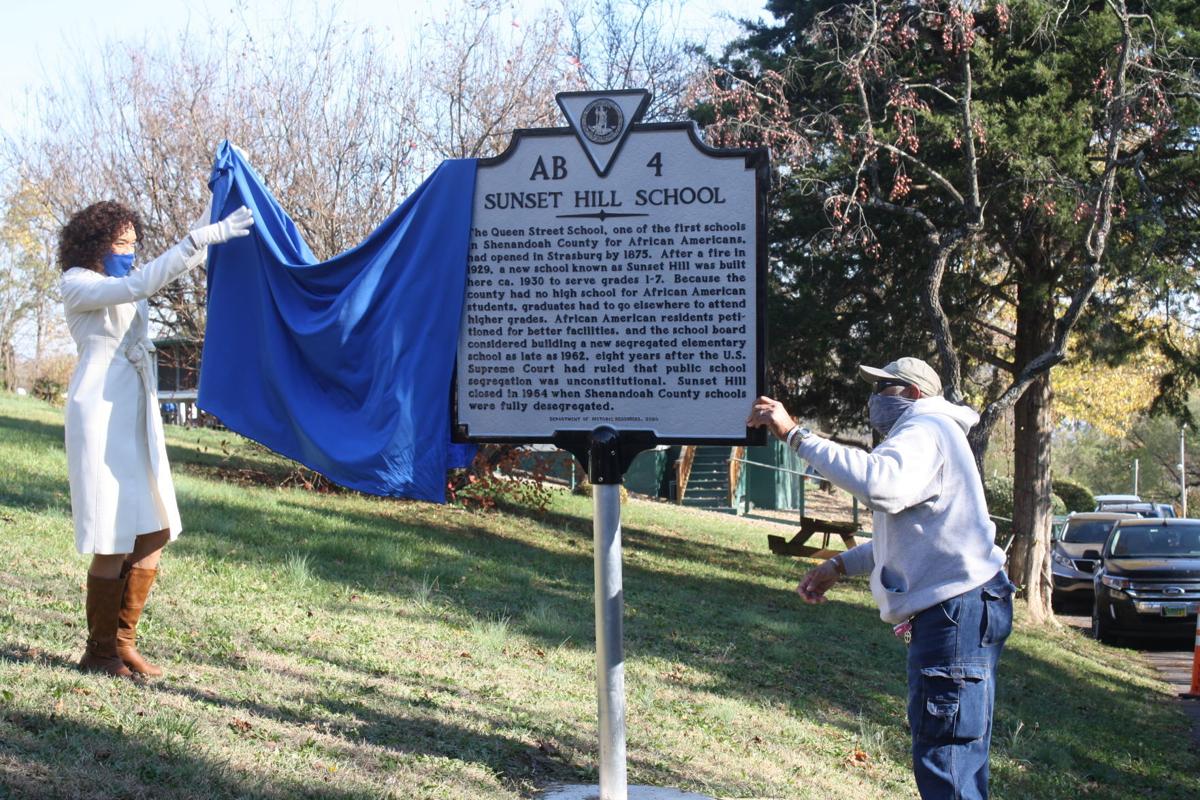 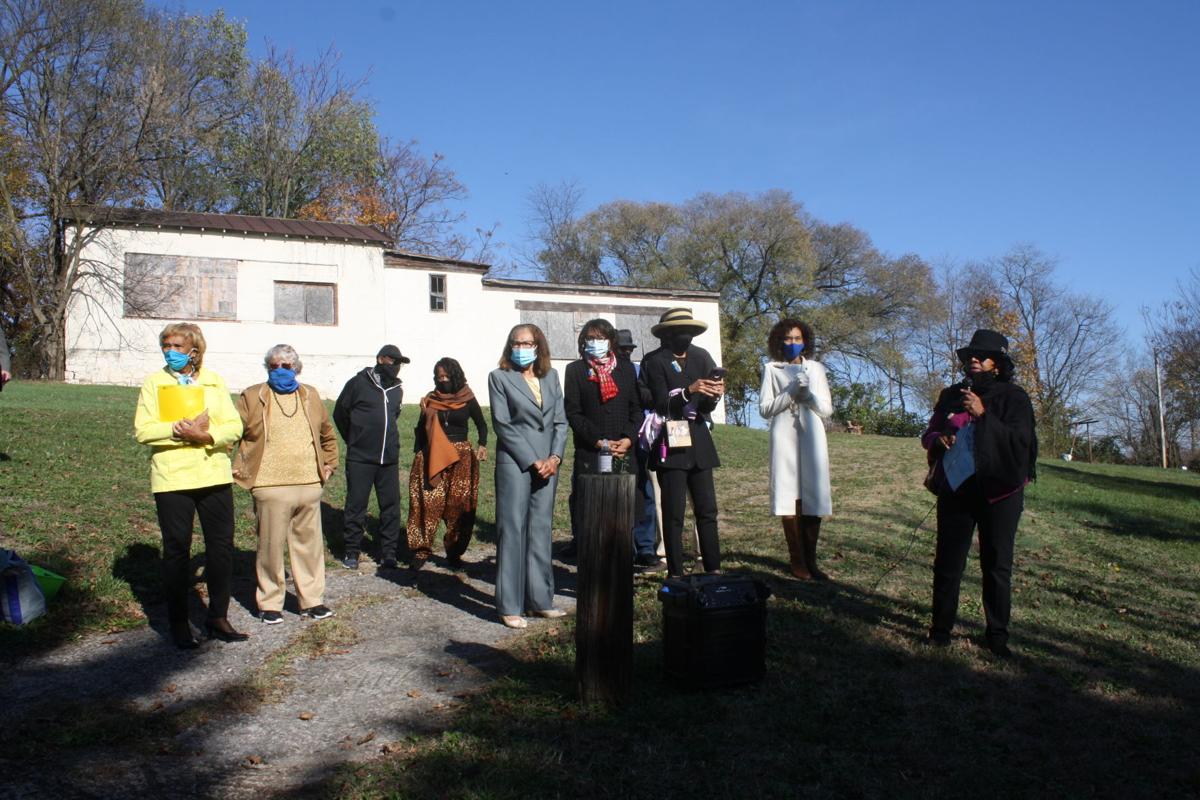 Alumni of Sunset Hill School stand outside the old African-American elementary school during a ceremony to dedicate and unveil a historical roadside marker on Sunset Street in Strasburg on Saturday. 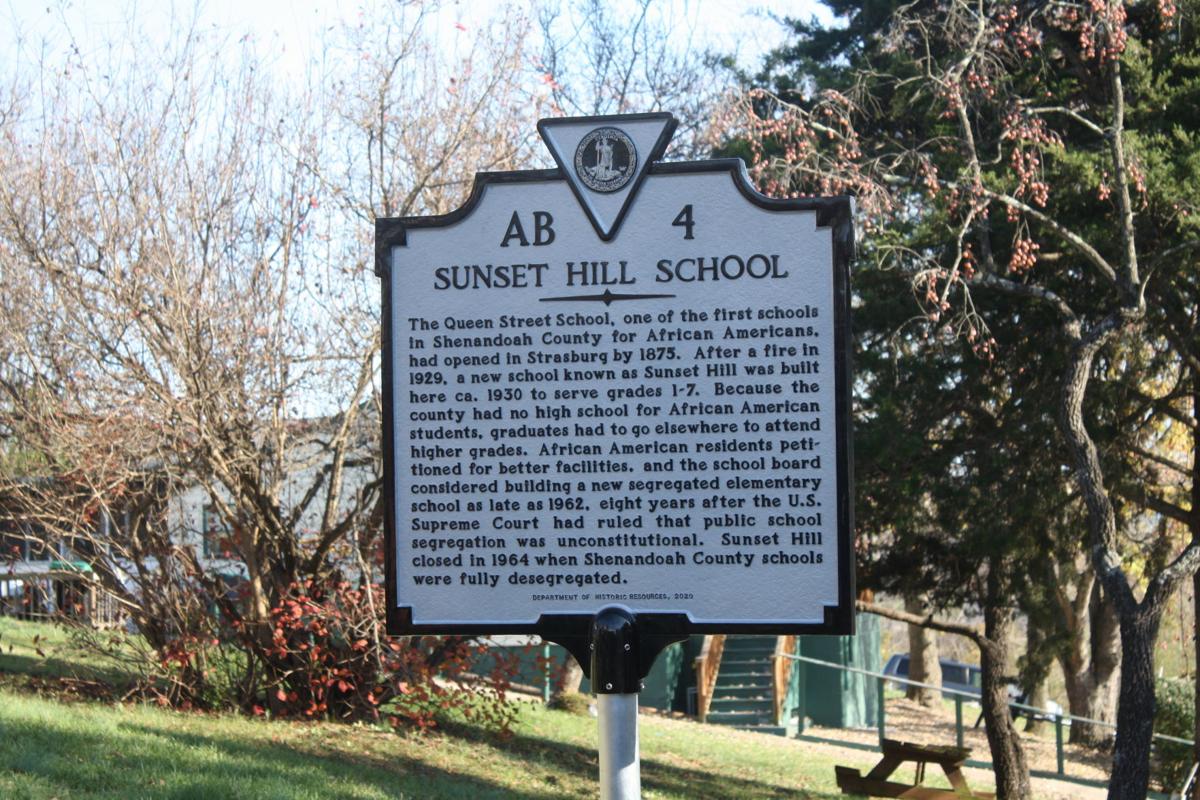 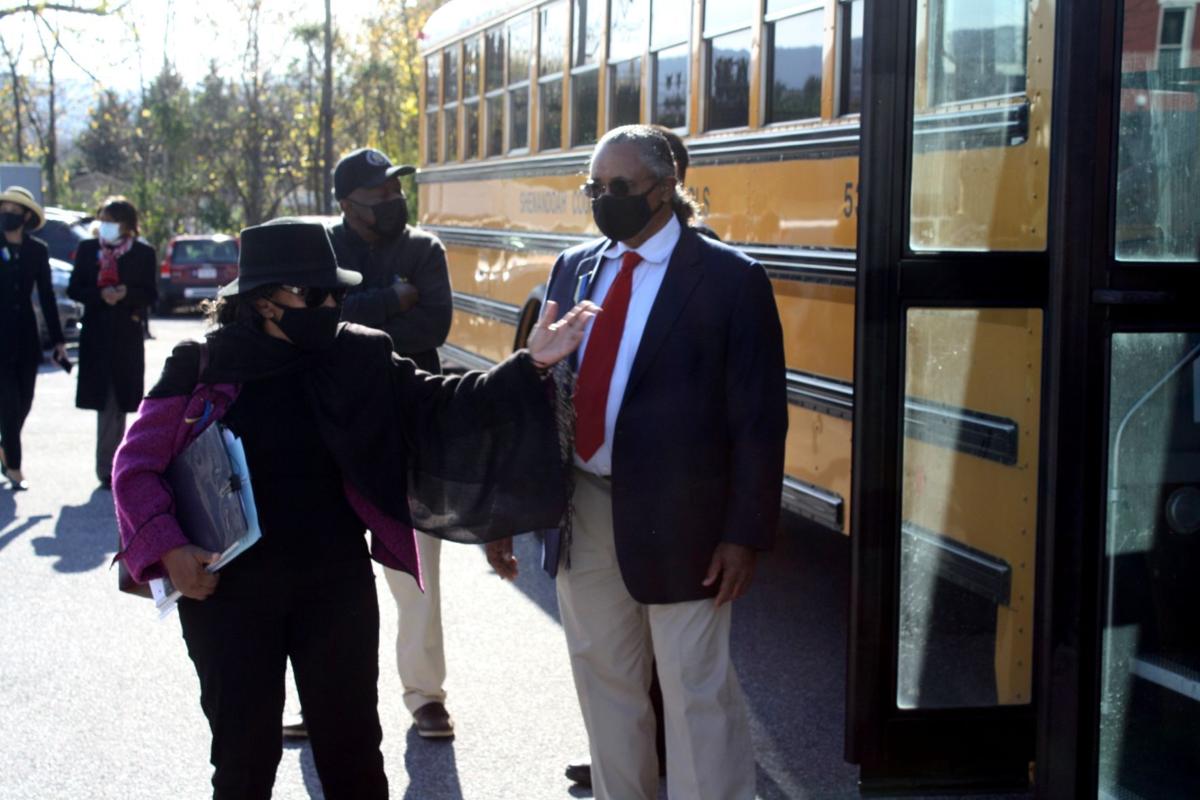 Marquetta Mitchell (left) and Wilbert Mitchell, alumni of Sunset Hill School, prepare to board a bus on Saturday outside Strasburg's town hall during a ceremony for the unveiling of a historical marker for the former African-American elementary school. According to Marquetta Mitchell, no Sunset Hill alumni had ridden a bus to or from the school prior to Saturday. 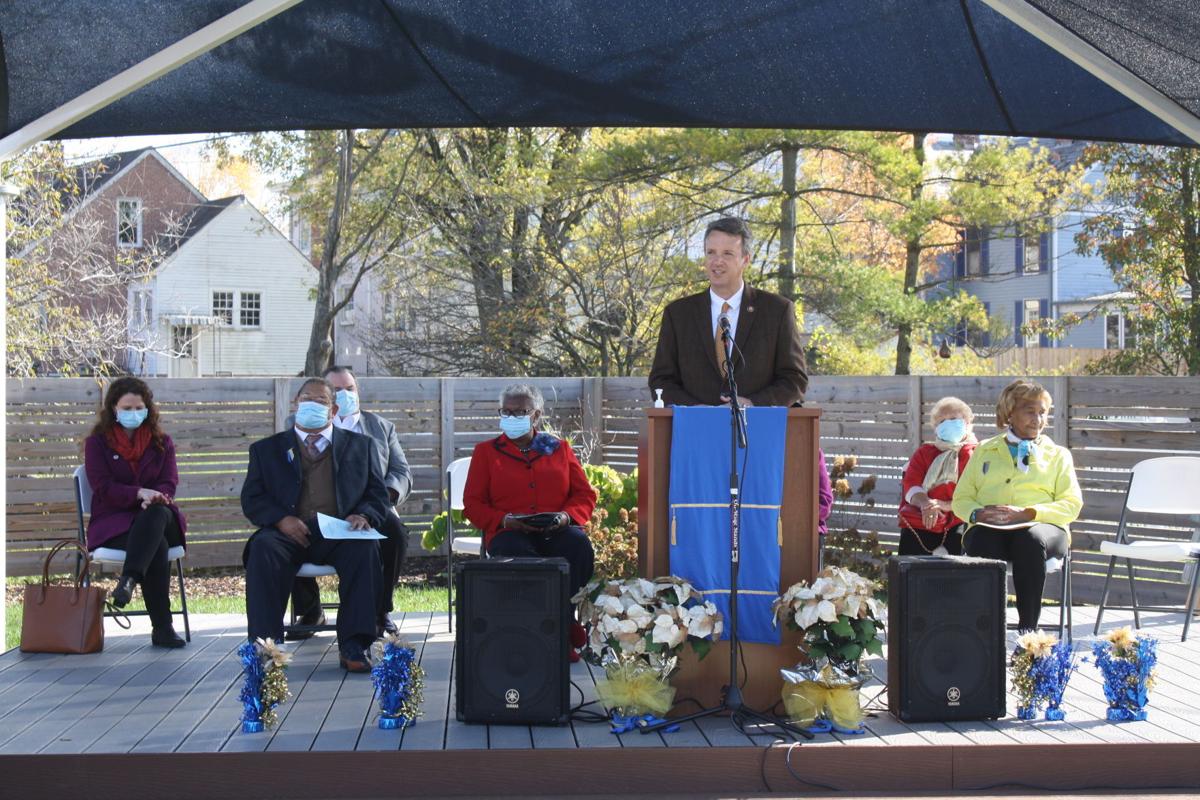 U.S. Rep. Ben Cline, R-Lexington, addresses the crowd on Saturday at Market Square next to the town hall in Strasburg during a ceremony for the dedication and unveiling of a historical roadside marker for Sunset Hill School.

Alumni of Sunset Hill School stand outside the old African-American elementary school during a ceremony to dedicate and unveil a historical roadside marker on Sunset Street in Strasburg on Saturday.

Marquetta Mitchell (left) and Wilbert Mitchell, alumni of Sunset Hill School, prepare to board a bus on Saturday outside Strasburg's town hall during a ceremony for the unveiling of a historical marker for the former African-American elementary school. According to Marquetta Mitchell, no Sunset Hill alumni had ridden a bus to or from the school prior to Saturday.

U.S. Rep. Ben Cline, R-Lexington, addresses the crowd on Saturday at Market Square next to the town hall in Strasburg during a ceremony for the dedication and unveiling of a historical roadside marker for Sunset Hill School.

For the first time in nearly 60 years, long after the building closed its doors, alumni of the Sunset Hill School in Strasburg boarded a bus on Saturday afternoon to transport them to the former elementary school that served African-American students in segregated Shenandoah County.

It was a short jaunt across town from Strasburg’s town hall to 348 Sunset St., but it was a powerful one that marked a key moment in the town’s history. At the end of the trip sat the dilapidated remains of what was once the all-Black school and a historical roadside marker whose unveiling was the reason for Saturday’s two-hour long ceremony.

That ceremony began next to the town hall in Market Square. Over 100 people gathered on the lawn to hear the history of Sunset Hill and celebrate the meaning behind the historical marker’s dedication. It ended at the old school with the alumni breaking into a round of singing and clapping after the marker's unveiling. Then they posed for a group photo with the building that holds fond and troubled memories looming in the background.

“We’re here today to celebrate,” Marquetta Mitchell, a Sunset Hill alumna, told the crowd at the start of the two-part ceremony, which was part of an effort that began 12 years ago when alumni of Sunset Hill and its precursor, Queen Street School, partnered with the Strasburg Museum and the town to figure out how to better tell a story that was “lost for a long time.”

Mitchell noted that few, if any, official records of Sunset Hill exist, and to the best of anyone’s knowledge the building, which Mitchell said also served some Latino students, opened its doors around 1930, a year after the Queen Street School “mysteriously” burned down in 1929.

The names of students who attended both schools and the teachers who taught there are only recognized through memories, oral history and memorabilia such as old report cards and certificates, Mitchell said. When Sunset Hill closed in 1964, a decade after the U.S. Supreme Court ruled segregation of public schools unconstitutional in Brown v. Board of Education, Mitchell said, “its history was barely recognized as having ever existed.”

The historical roadside marker, which was approved by the Virginia Department of Historic Resources in June, is meant to educate as well as acknowledge the experiences African-American students and their families endured in Strasburg during the period of racial segregation.

Mitchell described an unenviable situation confronting Black youth in that time, including a lack of transportation to and from the school, which served grades one through seven. Educational buildings and resources were “substandard, inadequate and often described by many alumni as deplorable,” she said.

“But it was here at Sunset Hill School that we alumni experienced some of our greatest joys, as students whose parents, teachers and community prepared us for the life to come,” Mitchell said. “They knew how to teach us the skills that we needed to be resilient in spite of the mountains they knew we had to climb.”

As part of the ceremony, nearly 20 alumni walked one-by-one across the stage set up in Market Square and announced their names, an official proclamation of their attendance of Sunset Hill. Some of those alumni claimed to have siblings -- in a few instances, 10 or more -- who also attended the school. Special commemorations were given for alumni who played significant roles in the historical marker project but have since passed, and thanks were given to many who helped put together the event.

Mitchell also acknowledged the students at Signal Knob Middle School, who in 2018-19 took the initiative to pursue a landmark recognizing Sunset Hill School, which spurred the alumni organization’s application for a historical marker through the state’s Highway Historical Marker Program.

Saturday’s ceremony included a round of remarks made by guest speakers including U.S. Rep. Ben Cline, R-Lexington, Shenandoah County Public Schools Superintendent Mark Johnston and Strasburg Town Council member Emily Reynolds, who attended on behalf of Mayor Brandy Boies, whom Reynolds said was in quarantine on Saturday due to possible exposure to COVID-19.

Cline called the Sunset Hill story an important one told not simply by a historical marker but through the stories of alumni.

“Events like these are so critically important as we strive to preserve our nation’s history and work to ensure that we never repeat it,” said Cline, adding that there is still more to be done in the fight for racial equality.

Johnston echoed those remarks, stating that the struggle isn’t over in the country nor in the local community and encouraged the setting of good examples for children who are “watching us each and every day.”

Reynolds said Saturday was a day for remembering the stories of Sunset Hill School, of understanding the challenges its teachers and students faced and for celebrating the fond memories the school provided. She added that the Strasburg community “must extend” Saturday’s celebration by “connecting with others to share the stories we’ve heard here today.”

“Let this historical marker serve as a reminder for us to continue to understand the complete history of our town,” Reynolds said. “By understanding our complete history, the good and the bad, we may better identify and call out the injustices that still happen today, so that one day, as a result of the work of those who came before us, those who are among us and those who will come after us, we the people of Strasburg and beyond, may celebrate a society more perfect in equality and justice for all.”

Mitchell, in closing her address to the crowd at Market Square, gave the “greatest thank you” to those who attended the event.

“We thank you because you have come here to acknowledge the story,” she said. “You have come here to embrace the story. And now that you’re hearing it, we hope that it would also become your story. We pray, more than anything, that that be accomplished, that this story is not just a story of African-American students that went to an African-American school, but now that you’ve heard it, it has certainly become your story. And we thank you for that, and we thank you for coming here to listen, to listen to the story.”