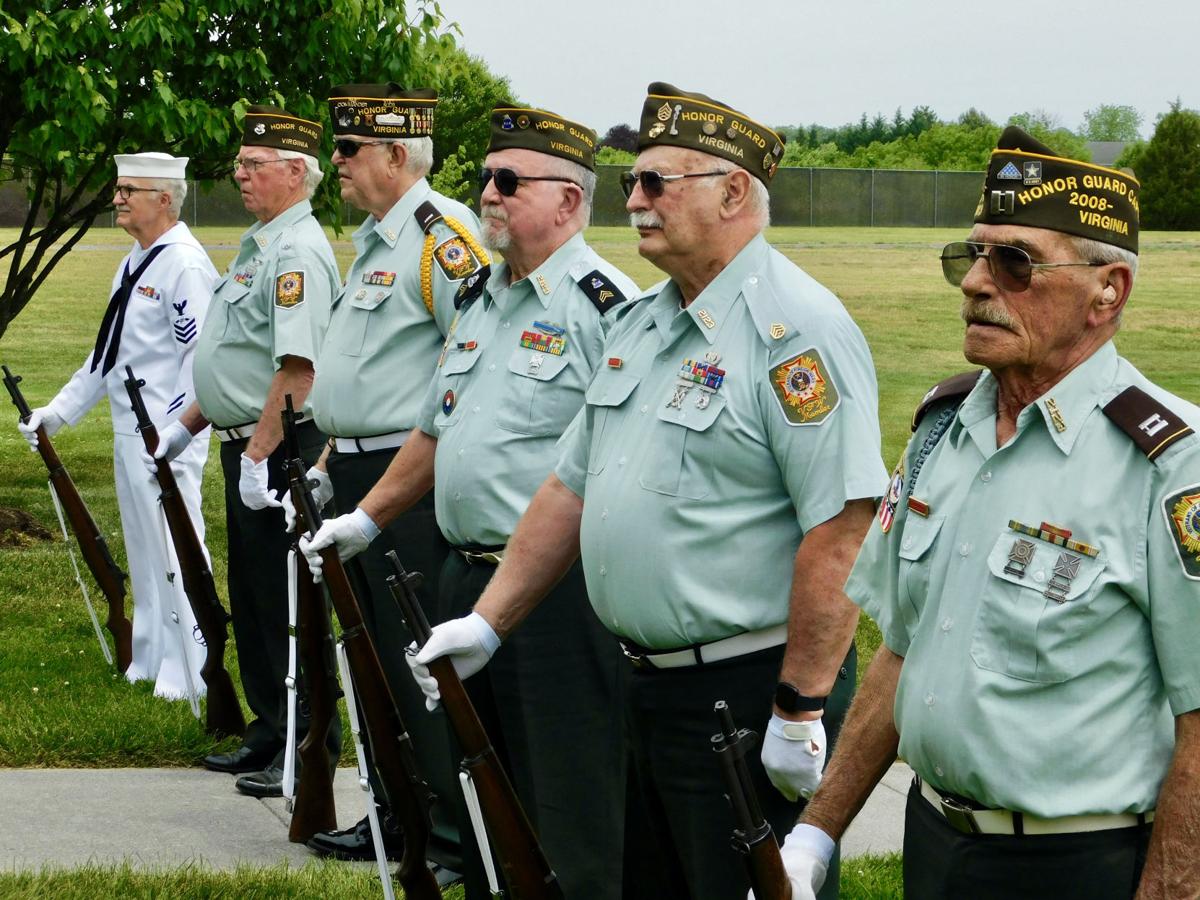 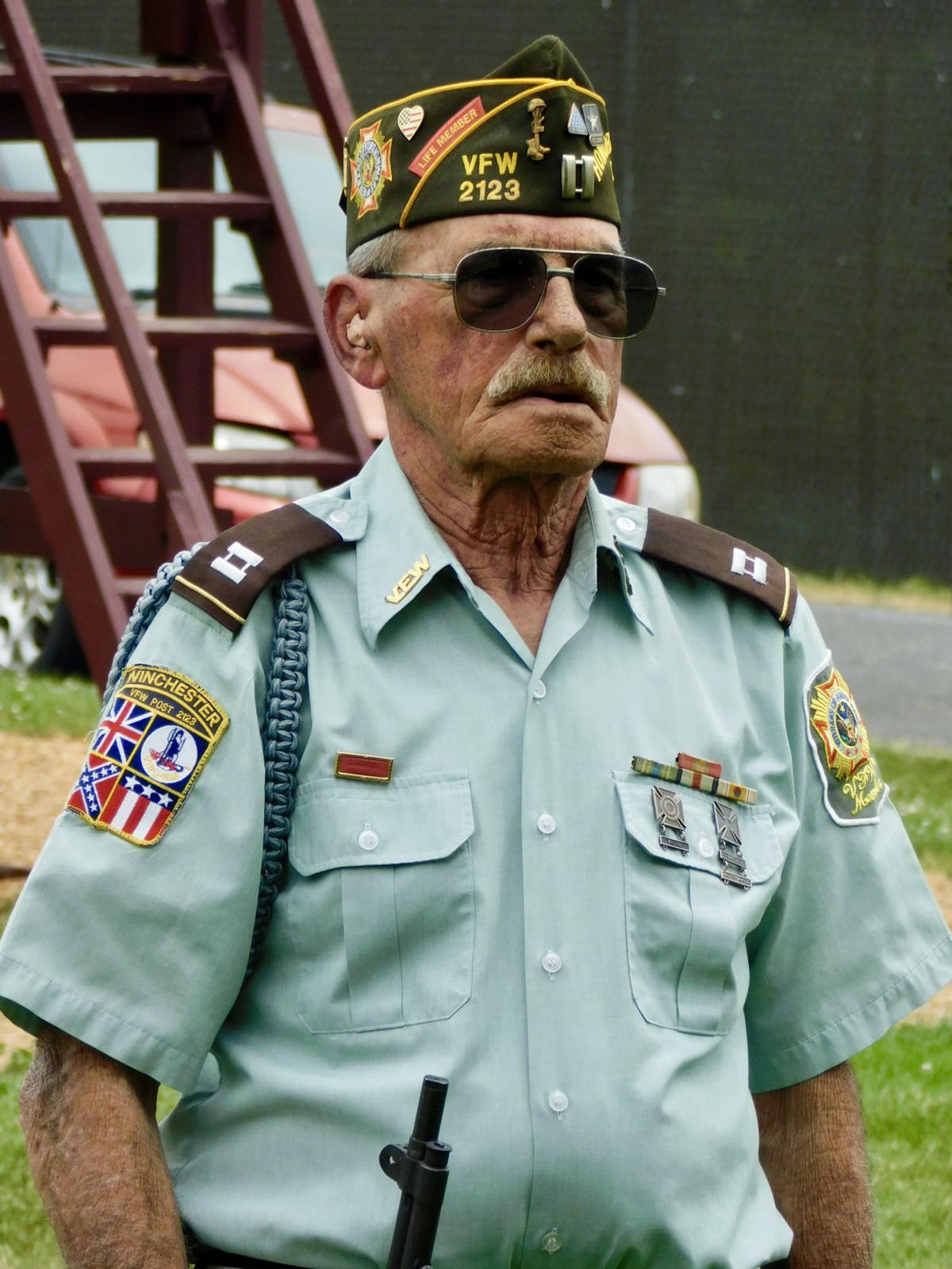 Capt. Ed Ellis, a Korean War veteran, is head of the VFW Post 2123 Honor Guard in Winchester. He is seen during a celebration of life for U.S. Navy veteran John Carl "Johnny" Foreman Sr.

Capt. Ed Ellis, a Korean War veteran, is head of the VFW Post 2123 Honor Guard in Winchester. He is seen during a celebration of life for U.S. Navy veteran John Carl "Johnny" Foreman Sr.

John Carl "Johnny" Foreman Sr. died on Jan. 23 but, due to the COVID-19 pandemic, he couldn't be properly memorialized for four months.

Foreman's legacy finally took center stage on May 22 in a small park behind the Winchester Eagles Club 824 aerie at 700 Baker Lane. The emotional highlight of the remembrance ceremony occurred at the very beginning, when members of the Veterans of Foreign Wars (VFW) Post 2123 Honor Guard played "Taps" and fired rifles in the air to salute the 75-year-old Strasburg resident who served two tours of duty with the U.S. Navy during the Vietnam War.

It was a hot day, probably too hot for these six guard members in their 70s and 80s to be wearing military uniforms and standing in the afternoon sun, but that didn't matter. Foreman was a veteran, and the all-volunteer Honor Guard is committed to making sure every veteran in the Winchester area gets an honorable sendoff that shows America's appreciation for their military service.

The VFW Post 2123 Honor Guard attends an average of two funerals per week, but its workload is about to increase because COVID-19 forced many memorial services and celebrations of life to be postponed. Now that the pandemic is easing, those ceremonies are being scheduled at a furious pace. On Memorial Day, the guard was scheduled to appear at three services.

That's a major commitment for these older volunteers who have already given so much for their country, but they wouldn't have it any other way.

Six of the 13 VFW Post 2123 members who serve in the guard — Baer, Tony Rulli, Bob Ryan, Jim Wolfe, Joe Burns and the unit's captain, Ed Ellis — recently talked about what they do and why they do it.

Baer said there's no pay or special compensation for Honor Guard members: "We're furnished our uniforms but that's it. We don't get anything else."

In fact, the closest thing to a perk isn't even given to Honor Guard members until they die. Whenever one falls, VFW Post 2123 dispatches two veterans to stand guard over their remains until he or she is laid to rest.

"They're just making sure you stay in there," Ellis joked.

Guard members don't even receive special training to perform their duties, but that's not really a big deal. Rulli said they follow the same drills and procedures they learned in basic training when they first joined the military 50 or 60 years ago.

The simple rule of thumb for new guard members, Ellis said with a grin, is, "Follow the guy next to you."

Regardless, it takes a fair amount of talent to do the job. Take the 21-gun salute, for instance. The Honor Guard pulls it off with complete synchronicity, firing each shot in perfect unison. While that may sound easy, it's not.

"It's 'ready, aim,' and the next word is 'fire,'" Burns explained. "But that's when you're supposed to be firing, so if you hear that word, you're way too late."

While most of the services it attends are local, Burns said the Honor Guard has been known to travel to other states in order to pay its respects.

Ellis is a Korean War veteran, making him the oldest person in the group. A few years behind him are Baer, Rulli, Ryan, Wolfe and Burns, all of whom served during the Vietnam War era.

Even though each Honor Guard member is a senior citizen, none of them plans to relinquish their positions because they're not sure who, if anyone, will follow in their footsteps. And since VFW Post 2123 is the only remaining veterans' organization in the Winchester area that sends an Honor Guard to the funerals of all local fallen veterans, they see their mission as being critically important.

"Unless you go to Arlington [National Cemetery], you're not going to get it," Baer said about the military honors offered by the guard. "The only thing the families have is us if they want military services."

Each branch of the military will dispatch two people to the funerals of veterans when requested, but those personnel only fold an American flag and present it to next of kin. The local Honor Guard does the flag presentation, plays "Taps," presents arms and fires a rifle salute. It then gathers the spent ammunition casings and presents them to family members as a keepsake.

"And each family gets a little card that talks about the folding of the flag," Ellis said.

The incumbent Honor Guard members said they are not aware of any up-and-coming VFW Post 2123 members who are interested in joining their group, and that could become a serious problem.

Two of the departing members, he said, have become busy with other things in their lives. The third is Rulli, who is moving to Texas.

What will the remaining Honor Guard members do to make sure they have enough personnel to properly honor fallen veterans?

Burns was a bit more optimistic.

"Guys and gals come up," he said. "They may be out there already. We just need to recruit them."

To learn more about VFW Post 2123 and its all-volunteer Honor Guard, visit vfwpost2123.org.