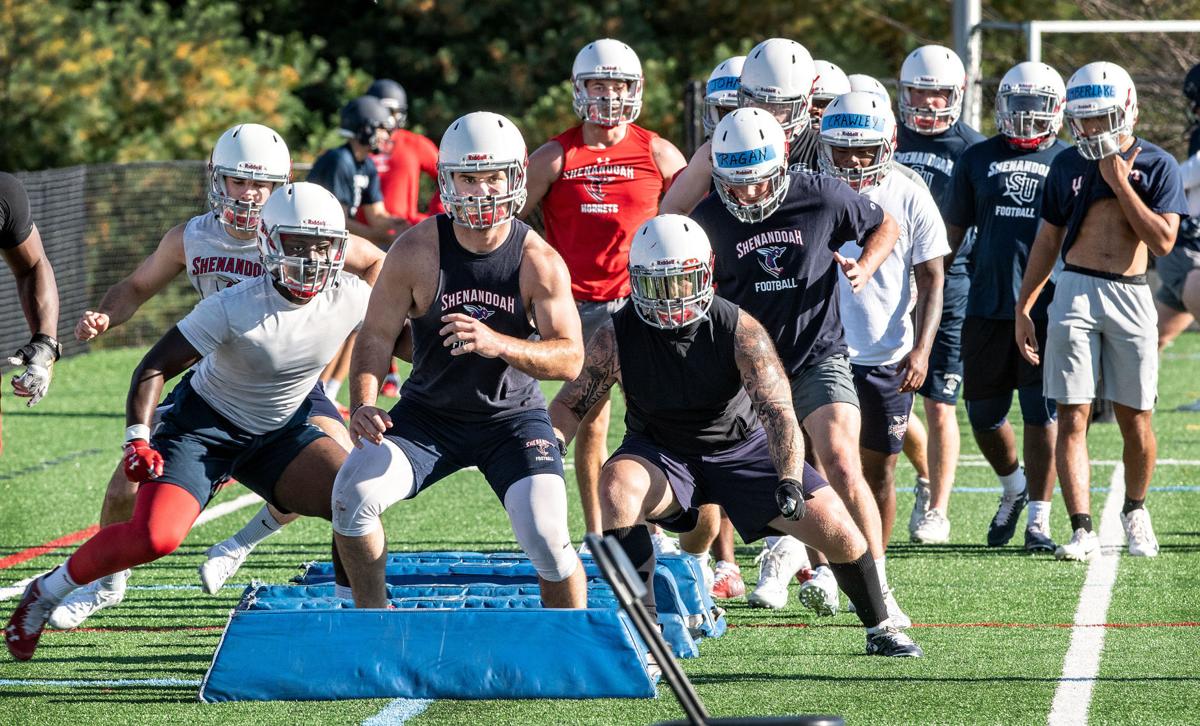 Shenandoah University’s football team works through drills Thursday evening during practice. Players are wearing face shields inside their helmets and are working in small groups of up to 15 people to combat COVID-19. 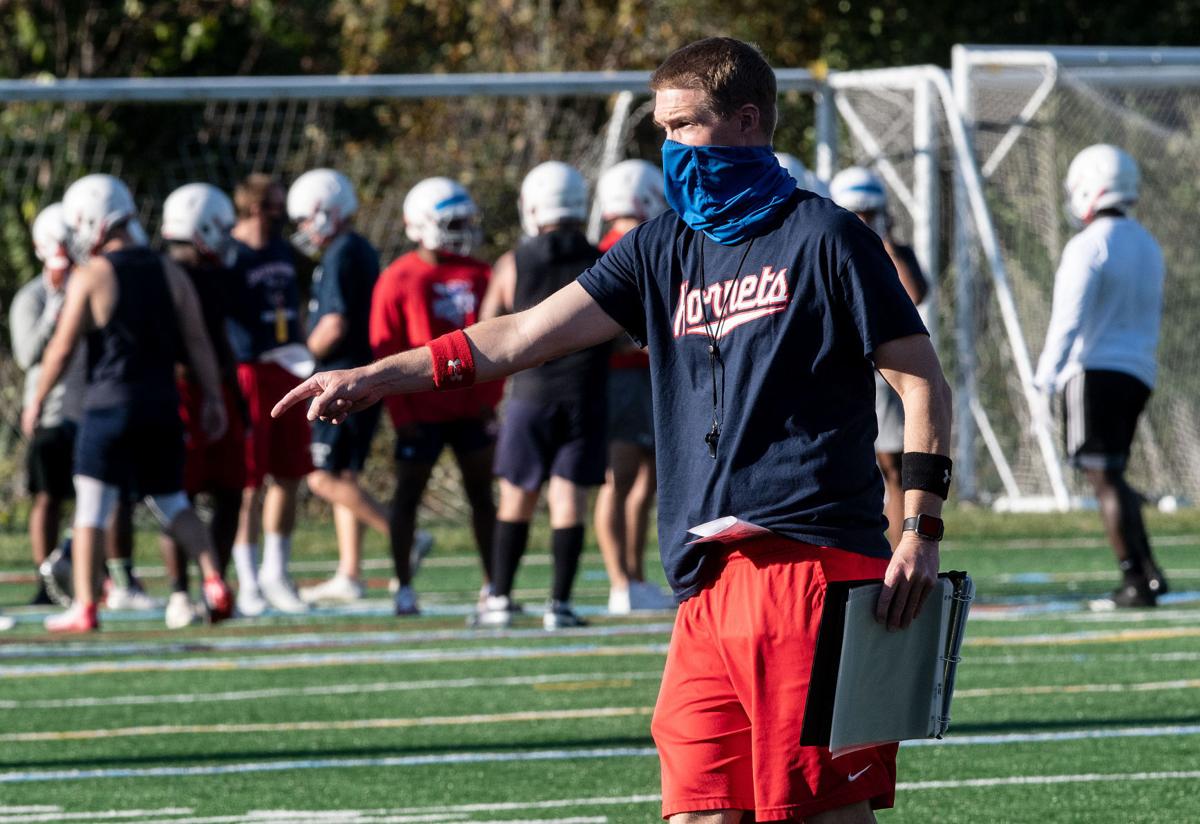 Shenandoah University’s football team works through drills Thursday evening during practice. Players are wearing face shields inside their helmets and are working in small groups of up to 15 people to combat COVID-19.

Only half of Shenandoah’s 120-man roster was on the field at Shentel Stadium at the start of the Hornets’ 2 ½-hour practice window on Thursday. As the midway point neared, the team’s other half began filtering into the stadium to await their turn.

Those two groups were further split into pods of no more than 15 players. None of those pods interacted with another during practice, and each performed drills specific to the position groups of the players that made up each pod.

Inside each player’s helmet was a clear face shield designed to serve the same purpose as the facemasks that have become a daily accessory for many during the COVID-19 pandemic, and players supplied their own water bottles.

There were no pads, and no crossover drills pitting the offense vs. the defense. In one instance, the pod made up of quarterbacks and pass-catchers ran a 7-on-7-style drill, during which receiver Brant Butler lined up as a cornerback and fellow receiver Jake Wallace — all 5-foot-10, 185 pounds of him — stood in as a linebacker.

“It feels good to be out here,” senior defensive back Daquan Pridget said as he stood off to the side while waiting his turn to hit the field with the second practice group. “The only downside, I would say, to practice is just not being able to compete against your offense. … To me, that’s how we really get to see where we are as a team, talent level. Not having that just throws me off a little bit, but other than that practice is fine.”

Under normal circumstances, the Hornets would’ve been preparing for Saturday’s homecoming game against Randolph-Macon. Instead, on Thursday, as they have for the past two weeks, they were working through a tightly restricted version of practice in the hopes that a planned spring season will come to fruition as the country continues to battle COVID-19.

“I think it’s been everything we really could’ve hoped for in the sense that, in my opinion. I think we’re able to do more than I initially thought we’d be able to do,” Hornets senior tight end Jack Massie said. “We’re out here with our teammates, we’re building those relationships, we’re getting our conditioning, we’re going through our playbook, getting everybody caught up to speed.

“I think the biggest question initially was how real was it? How likely are the prospects of us playing?” he added. “I think as the semester’s gone on we’ve kind of realized this is gonna happen. The spring is very likely to happen. I think since that has been answered, I think it’s kind of changed the trajectory entirely. We have something, a goal to reach toward, it’s not just kind of monotony.”

Indeed, the mere fact that Shenandoah has been able to get on the practice field has boosted the confidence that a spring football season will kick off in a few months. It’s one thing to put a plan on paper – SU and the Old Dominion Athletic Conference have yet to announce formal plans after they jointly suspended all sports until Jan. 1 back in July – and another to see real progress being made.

“Just coming out here, I feel like it made having a season more reality than not,” said junior defensive back/linebacker Trammel Anthony. “... We’ve been talking about getting to the spring and hoping for a season and everything, but getting out here just shows that it is possible that we could have a season in the spring and that we get to practice for it like we are.”

According to several Hornets, including head coach Scott Yoder, Shenandoah’s first two weeks of practice have gone pretty smoothly. Players are putting in work even while always stuck with the notion in the back of their minds that there are mitigation strategies that need to be followed.

“Football’s a contact sport and even though we don’t have pads on we’re around each other and we’re getting close to each other, so just thinking about that in the back of our heads is something we think about constantly,” Anthony said. “But I think we’re doing the right things, we’re making the adjustments that we need to with everything that’s going on.”

Yoder noted that when students returned to campus in August, the football team had several players who were required to self-quarantine before they could join a group setting. Since then, though, SU’s football program hasn’t had any COVID-related hiccups, Yoder said.

Shenandoah’s football team, as of Thursday, had been tested once, just before the start of practice on Oct. 1, Yoder added, though many of SU’s players have been tested at least one additional time through the university’s regular COVID testing of the entire student body.

No quarantines or facility shutdowns have meant the Hornets can, so far, focus on maximizing their time on the practice field this fall. Yoder said the coaching staff, given the restrictions, are taking the approach right now to examine each position group and determine where they’d like the team to be when true preseason practice begins in a few months.

“The silver lining in this is that the install with the young guys, we’ve been able to really take our time and not have to get on a forward schedule if our guys aren’t ready for it,” Yoder said. “Just for instance, in the run game we only have two runs in right now, which is not typical for us. But that’s given us an ability to kind of slow it down for the young guys and really try to stress fundamentals and stuff. It’s just, what can we do now to get ready for January so that in January we can actually evaluate football and maybe not as much mental X and O stuff.”