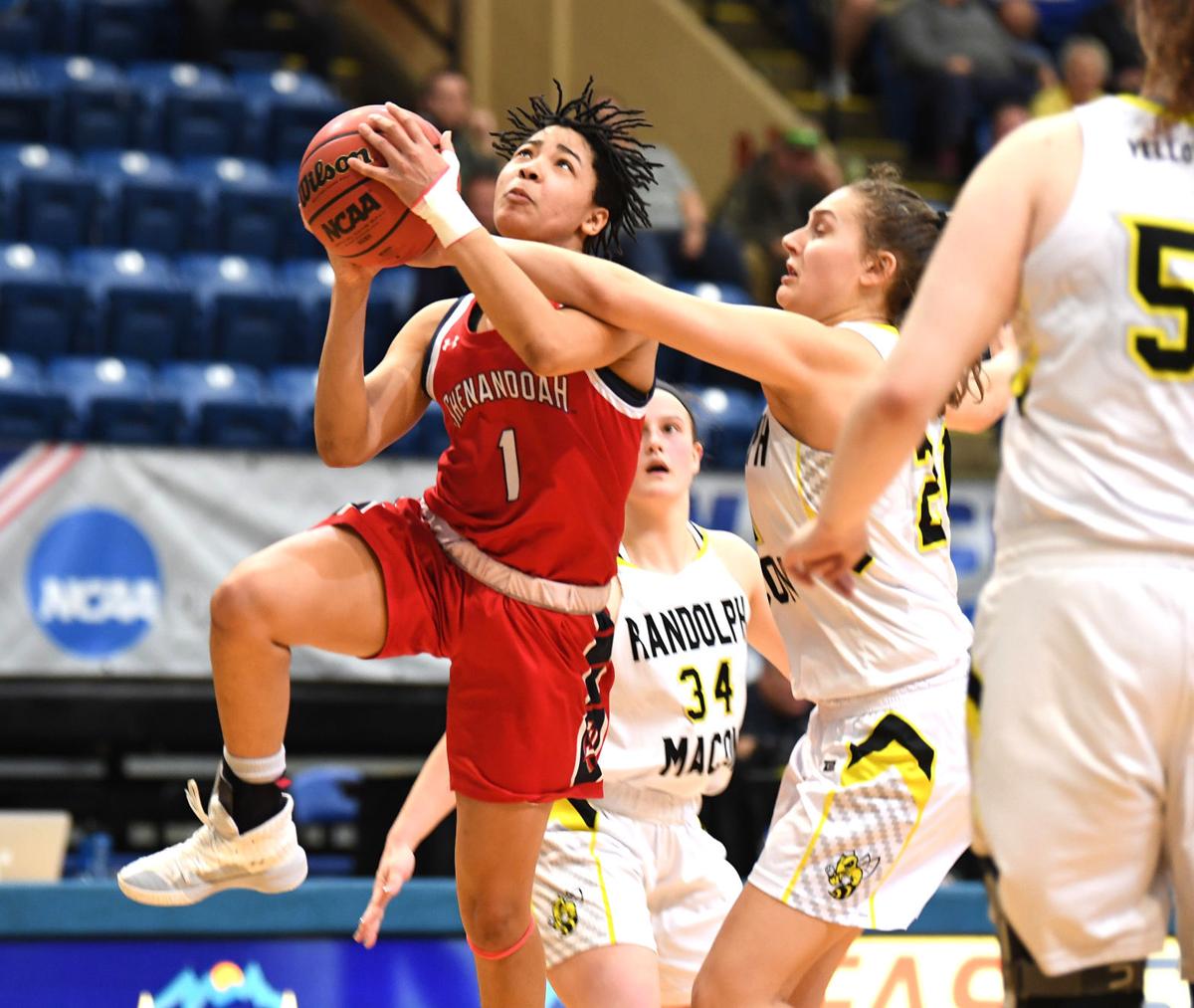 Junior guard Sierra St. Cyr (1) is one of six returning players for a Shenandoah University women’s basketball team that also features eight freshmen. The Hornets open their season at 6 tonight at home against Roanoke College. 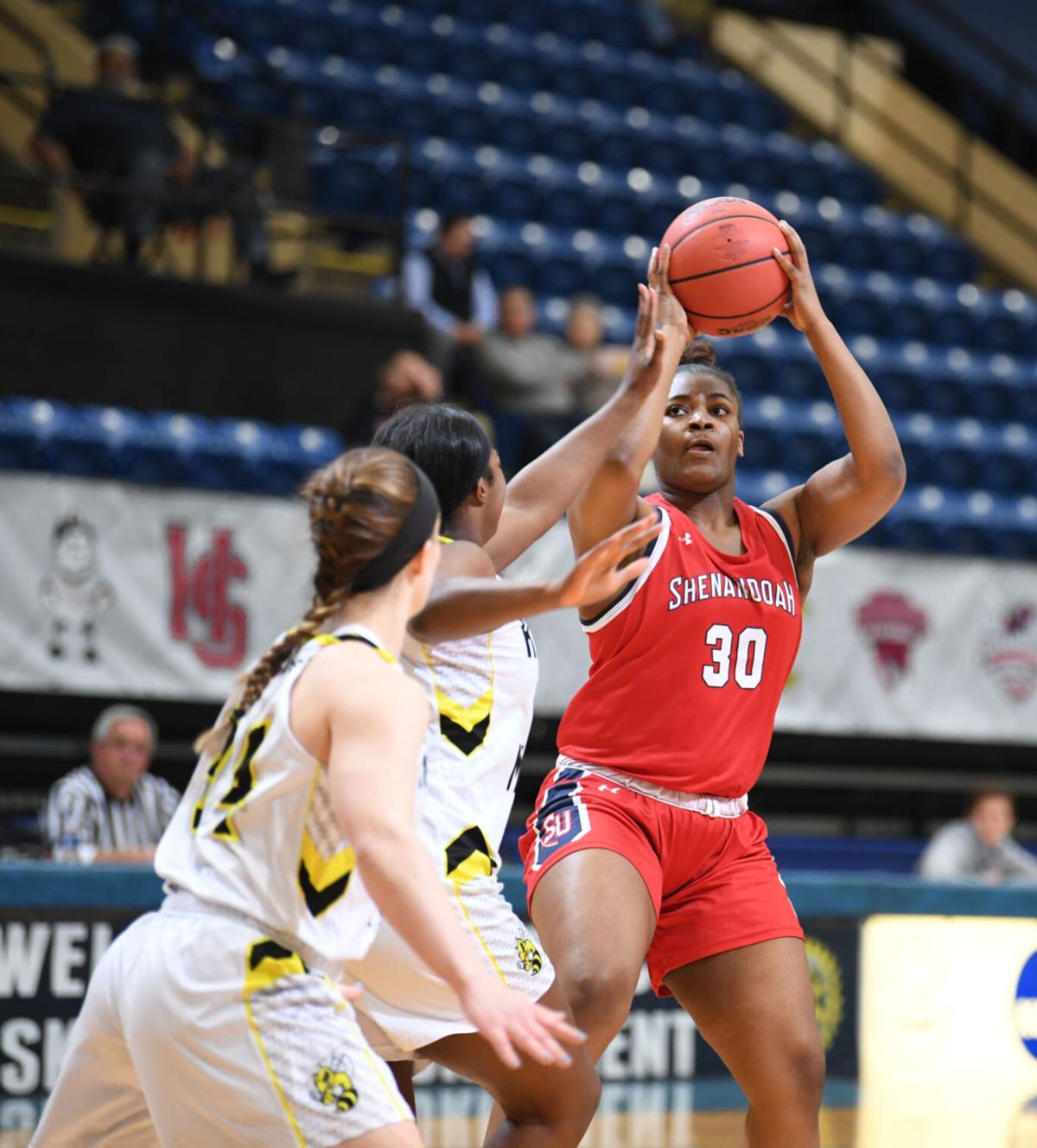 Junior guard Sierra St. Cyr (1) is one of six returning players for a Shenandoah University women’s basketball team that also features eight freshmen. The Hornets open their season at 6 tonight at home against Roanoke College.

In winning 32 games over the previous two seasons — the best two-season stretch for Shenandoah University women’s basketball in 32 years — the Hornets relied mainly on their stingy defensive play.

SU’s roster is a lot different this year, though, and the plan is for these Hornets to do a lot more stinging when the ball’s in their hands.

The Hornets will begin their abbreviated 2021 season at home tonight against Old Dominion Conference rival Roanoke, though the 6 p.m. game against the Maroons at the Wilkins Center will not count toward the ODAC standings. No spectators will be allowed at basketball games this season.

SU will play 12 games overall and 10 ODAC games. The Hornets were supposed to play a round robin, 11-game ODAC schedule, but SU will not play Guilford this year. That game was supposed to take place Saturday, but won’t happen due to COVID-19. Any game that can’t be played on its original date due to COVID-19 protocols will not be made up this year.

Because of COVID-19, uncertainty will hang over the entire season. All the Hornets can do is make the most of their opportunities to play when they get them, and that will be particularly important this season.

Shenandoah won its most-ever ODAC regular-season games (12-6 record) under seventh-year head coach Melissa Smelzer-Kraft in going 16-10 overall in 2019-20, but that still only resulted in a tie for fifth place in the ODAC. Only the top four teams will qualify for the ODAC Tournament, which will feature semifinal games on March 4 and a championship game on March 6.

A higher-octane offense could be the difference if SU is to be among the last four standing. The Hornets ranked second in the ODAC in scoring defense (54.0 points) and first in field goal percentage defense (34.8%) last year, but they ranked 10th in scoring (58.1) and had the fewest field goal attempts in the league (53.3 per game). SU’s 280 3-point attempts were 93 fewer than the team that attempted the second fewest 3-pointers in the conference (Virginia Wesleyan).

“I’m hoping we can put the ball in the hoop a little bit more,” Smeltzer-Kraft said in a phone interview. “I’m hoping that we can play a lot faster than we have historically speaking. We’ve got some really quick freshmen. They want to play. They want to run. And I’m trying not to get in their way.

“I think that will trickle over to the defensive side. I’m hoping we don’t have to be as reliant on forcing opponents to not score and slowing the pace down. I’m hoping that we can have more flow to both ends of the basketball.”

The Hornets lost four seniors who contributed significantly to SU’s stellar two-year run, which includes the 2018-19 ODAC Tournament championship. But after not adding anyone to last year’s team, they have eight freshmen on this year’s roster of 14.

Despite that youth, the Hornets still have a strong veteran presence. SU features returning starters and juniors Sierra St. Cyr (8.9 points, 5.4 rebounds, 2.4 assists), a 5-foot-4 guard; and Ragan Johnson (8.7 points, 5.8 rebounds), a 5-9 forward. SU also brings back its top player off the bench in junior forward Olivia Weinel, who ranked second on the team in scoring with 9.1 ppg in just 16.1 minutes per game.

“They’re our absolute backbone,” Smeltzer-Kraft said. “Our upperclassmen have really done a fantastic job helping the freshman transition in and also filling the shoes of some of the women that have graduated with their own voices and own work ethic. I’m really, really proud of them. They’ve made this transition very easy for me, and I think the freshmen would agree as well.”

“The chemistry is way better now [compared to] October,” Johnson said. “Given that we’re in COVID times, we hadn’t been able to bond as much as we wanted to [last semester]. But now we’re getting all this bonding time on the court.”

The freshmen class includes two 1,000-point high school scorers (5-7 guard Maggie Rooklin of Alleghany High School and 5-5 guard Kayla Maxson of Atlee) and a player who ranks among the top 10 in her school’s history in steals and assists (5-4 guard Zoe Star of Oakdale High School in Maryland).

As excited as Smeltzer-Kraft is about her freshmen, she expects to lean on the upperclassmen quite a bit because of the nature of the season. Division III basketball workouts began on Oct. 1, but the nearly 30 practices in the fall semester were mostly spent focusing on fundamentals and familiarizing themselves with each other. After the semester break, SU returned to practice on Jan. 5.

“I’m very excited to have games, because Olivia Weinel has worked her rear end off for the past 12 months,” Smeltzer-Kraft said. “She’s ready for this moment, and she’s going to start for us. I’m really excited to see what she’s able to do when she’s at the forefront as a starter as opposed to sixth man.

“Sarah Sondrol has basically been working behind closed doors for two years, and she is ready for the moment that has presented itself. I think she’s raring to go, and I’m excited to see Sarah come into her own and be a stabilizing force. She’s built like a brick wall, and I can’t wait to watch her play more.”

“Hopefully Sierra can get more scoring opportunities due to the freshmen who can also handle the ball,” Smeltzer-Kraft said.

St. Cyr’s seven 3-pointers last year is the most for anyone among SU’s returning players. But Smeltzer-Kraft said Kimble, Maxson and Rooklin are all capable 3-point shooters.

“I’m hoping to keep the defense in check a little bit by actually being able to be a threat from the outside,” Smeltzer-Kraft said.

“We’re more guard-heavy this year,” St. Cyr said. “The guards coming in are able to shoot the 3 and drive. I think our offense will be a strength for us.”

The Hornets don’t know what type of season they’re going to have, but they’re excited. SU was originally supposed to open with Guilford, but after that game was postponed the Hornets added tonight’s Roanoke game to the schedule.

“There was an uproar when Coach Kraft told us [on Friday] we had a game [today], because it wasn’t scheduled,” Johnson said. “Everybody was jumping up and down, screaming.”

Since one game has already been canceled, any chance to play is a good one.

“My expectations are to control what we can control,” Johnson said. “We never know what’s going to happen nowadays. We just have to give maximum effort every time we step onto the court in practice and on gamedays, because at any time [basketball] can be taken away from us.”