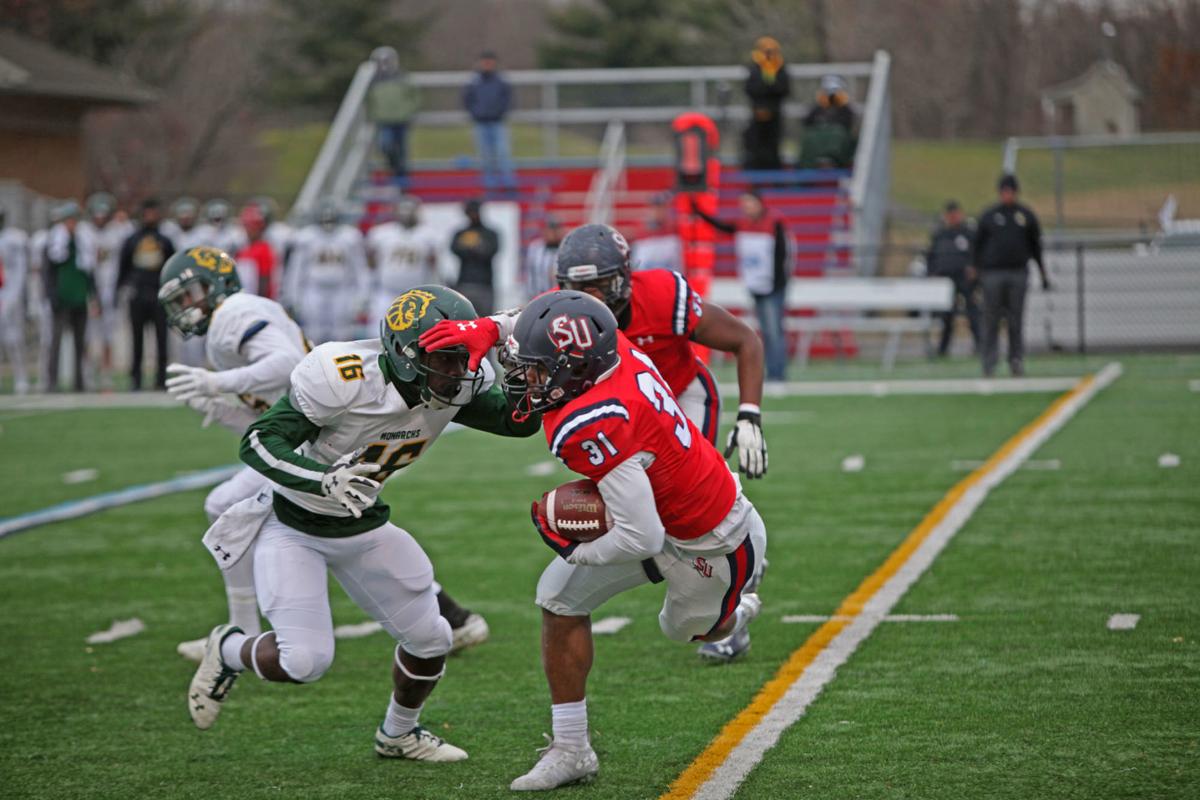 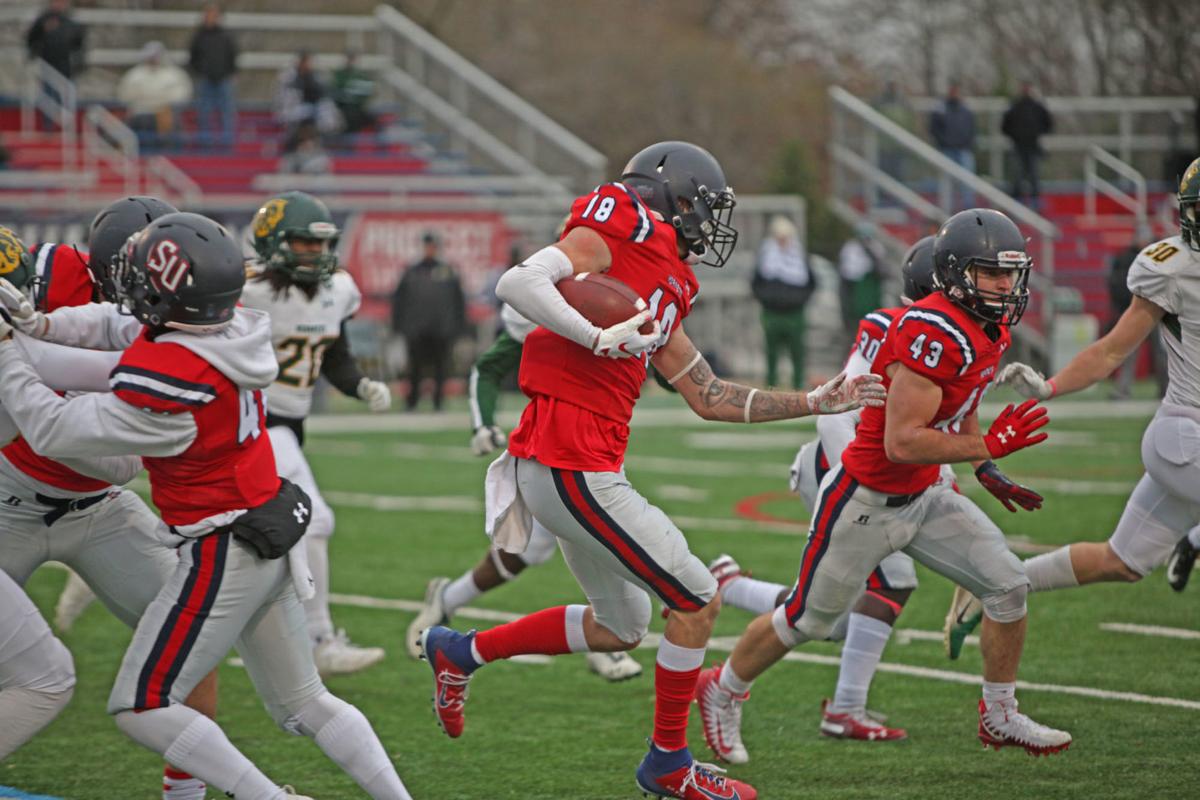 WINCHESTER — Shenandoah University’s 70-35 romp at home over Methodist to cap the 2019 college football season on Saturday afternoon was important to the Hornets for several reasons.

It was a fantastic way to send out the seniors, most of whom played the final football games of their lives on their home turf at Shentel Stadium. The win made SU 6-4 for the third time in the past four years and gave the program three winning seasons in a four-year span for the second time since Shenandoah rebooted football in 2000.

It was also a perfect springboard into the offseason for a Hornets squad still trying to build itself into a contender in the Old Dominion Athletic Conference under head coach Scott Yoder, and several underclassmen after Saturday’s drubbing of Methodist said it offered SU’s younger players a glimpse of the possibilities the future holds.

“This just goes to show we just have to work in the offseason, because if this is what we can do at the end of our season … all next season, the sky’s the limit.”

The hope now is that the 2019 season finale, as well as the season’s worth of growth that the Hornets compiled in 10 games, helps Shenandoah break through the six-win barrier that has stood in the way of SU’s ultimate goal over the past four years.

That’s not to say this year’s 6-4 mark was a disappointment for Shenandoah. It was a notable feat, actually, considering the Hornets played tag with their starting quarterbacks for the first half of the season — the one thing Yoder said at the beginning of the season that SU couldn’t afford to do — before settling on freshman Chris Sonnenberg, a little-known quantity until he made his surprise appearance against Emory & Henry in Week 8.

“We went into the season and I really thought it was important to not play the quarterback carousel, just because (we needed to) have an identity, build on it,” Yoder said. “And what did I do? We played the quarterback carousel. To play three quarterbacks, to have a freshman start halfway (through the season) … (in) the Ferrum game we had two freshmen O-linemen starting. To be 6-4, I’m pretty proud of the group, especially not kind of knowing what our identity was going into the season offensively. At times we played really, really good defense. But I think that this group grinded it out to get to 6-4. … But we didn’t come here to be 6-4, 5-5.”

In the end, a Shenandoah team that wasn’t expected to realistically contend for the ODAC crown in 2019 (SU was picked to finish seventh in the preseason conference poll) beat the teams it was supposed to beat while it still searched for a way to consistently challenge the league’s top teams. The Hornets (4-4 in ODAC play) finished right in the middle of the nine-team conference race, their four wins coming against the four teams (all with losing overall records) that finished below them in the standings and their four losses coming to the teams that finished ahead of them.

And Shenandoah’s players and coaches could just as easily have been celebrating the program’s first seven-win season since 2004 at the end of Saturday’s game.

Two weeks ago in the ODAC finale, SU fell to Washington & Lee, 34-31, in a game that saw the Hornets twice throw interceptions in the end zone. In a 41-31 loss to Emory & Henry, Shenandoah was a bad first quarter away from standing toe-to-toe with the Wasps and actually outscored E&H 31-17 over the final 40 minutes.

Shenandoah couldn’t hang with eventual ODAC champ Bridgewater in its second game of the season, but it only trailed conference runner-up Randolph-Macon 7-0 at halftime before falling 35-14 on the road in Game 5.

“There wasn’t a game that we played that we didn’t have a chance to win,” junior defensive back Daquan Pridget said. “Giving us that, we’re looking real good going into the offseason and just working on what we need to work on.”

Sonnenberg threw for 1,363 yards in four games (he appeared in five contests in 2019 but didn’t attempt a pass in mop-up duty against Guilford in the third game of the season), and his 272.6 yards passing per game would’ve led the ODAC had he played in enough games to qualify. Sonnenberg’s 17 touchdowns passes (against nine interceptions) ranked third in the conference.

With Shenandoah struggling to settle on a QB and a running game that for most of the season had a hard time generating yards, Yoder said SU’s offensive identity became its skill players. Senior Casey Stewart, the ODAC’s leading receiver, had 70 receptions for 1,191 and 13 touchdowns, and Wallace hauled in 71 catches for 618 yards to pace a deep receiving corps that returns most of its pieces next season.

Yoder added that SU’s offense “sputtered” midway through the season when junior tight end/H-back Jack Massie, a converted linebacker, went down with an injury against Guilford and missed three games.

“To get him back for the last three was huge,” Yoder said. “He’s a really good football player. He’s gonna be a big part of what we do moving forward. But I think we would’ve been better, we would’ve been a little bit different had he not gotten injured.”

SU’s defense, a unit that had taken a backseat to a high-flying offense in the previous two seasons, showed improvement in 2019 and drew praise throughout the season from multiple offensive players who credited the defense with keeping the Hornets in games while the offense battled its inconsistencies.

One of the worst pass defenses in Division III in 2018 cut down its passing yards allowed to 230 per game this fall, the third-best mark in the ODAC, and continued to take the football away. Led by senior safety Nate Hill’s seven interceptions, which tied for the most in D3, the Hornets posted an ODAC-high 16 interceptions this season and had 23 total takeaways.

Shenandoah finished the season ranked fourth in the ODAC in scoring defense (26.8 points allowed per game), seventh in total defense (416.5 yards per game) and eighth in rush defense (186.3 ypg).

“Our defense stepped up a whole lot more than last year,” said sophomore linebacker Ben Burgan, who took over a starting role late in the season. “We always worked on tackling. Tackling was a big thing this year. We practiced tackling drills, form tackling, every day in practice. I think that was our big issue last year was not being able to form-tackle. Just making sure we were tackling, keeping yards after contact down.”

That defensive unit, like the offense, will lose four senior starters in defensive tackle Randy Oliver, linebackers Tyler Williams and Bernie Hayes and Hill. On offense, graduation will take Stewart, running back Mario Wisdom and offensive linemen Michael Davidson and Daniel Small from the starting lineup.

“They really left things better than they found them in all aspects of the word,” Yoder said. “Just think about it, last year was the first time that our team has had a 3.0 GPA and the message that that sends to our team. The things that they were able to accomplish on and off the field, and I know they wanted to win more football games and we wanted to win more football games for them, but they made this a better place. And I think four years ago, think about where the program was for years, we’re still just kind of getting into what we wanted to be and maybe what we could be in the ODAC. And now I think that vision and that foundation has a lot more layers to it. Certainly a tip of the cap to them because they’ve done a lot for our program.”