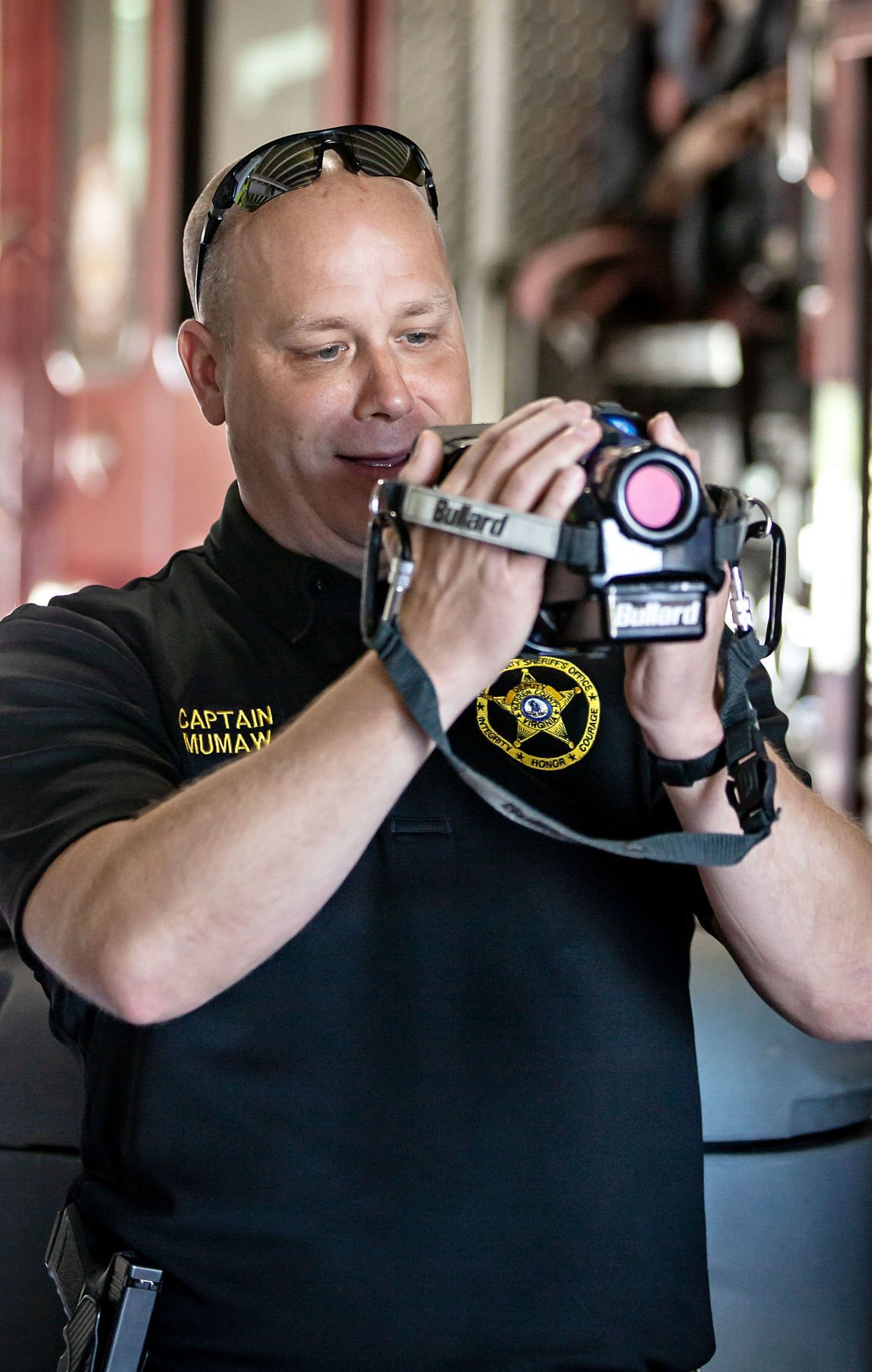 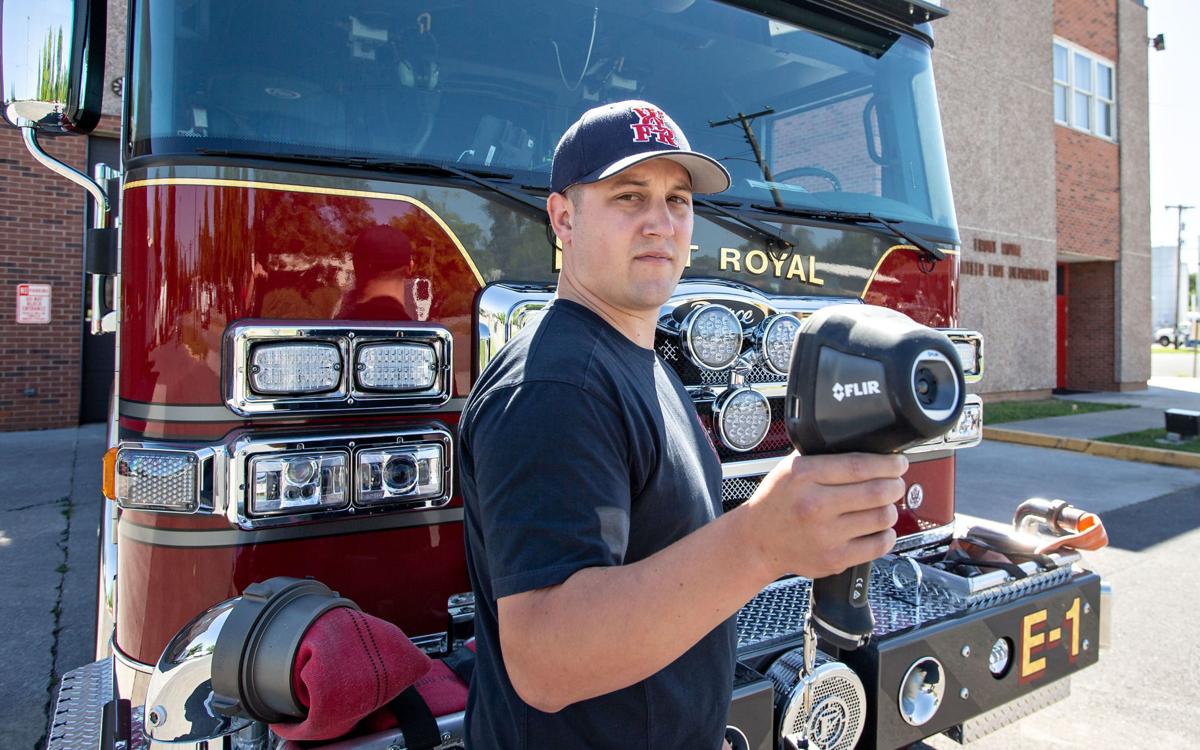 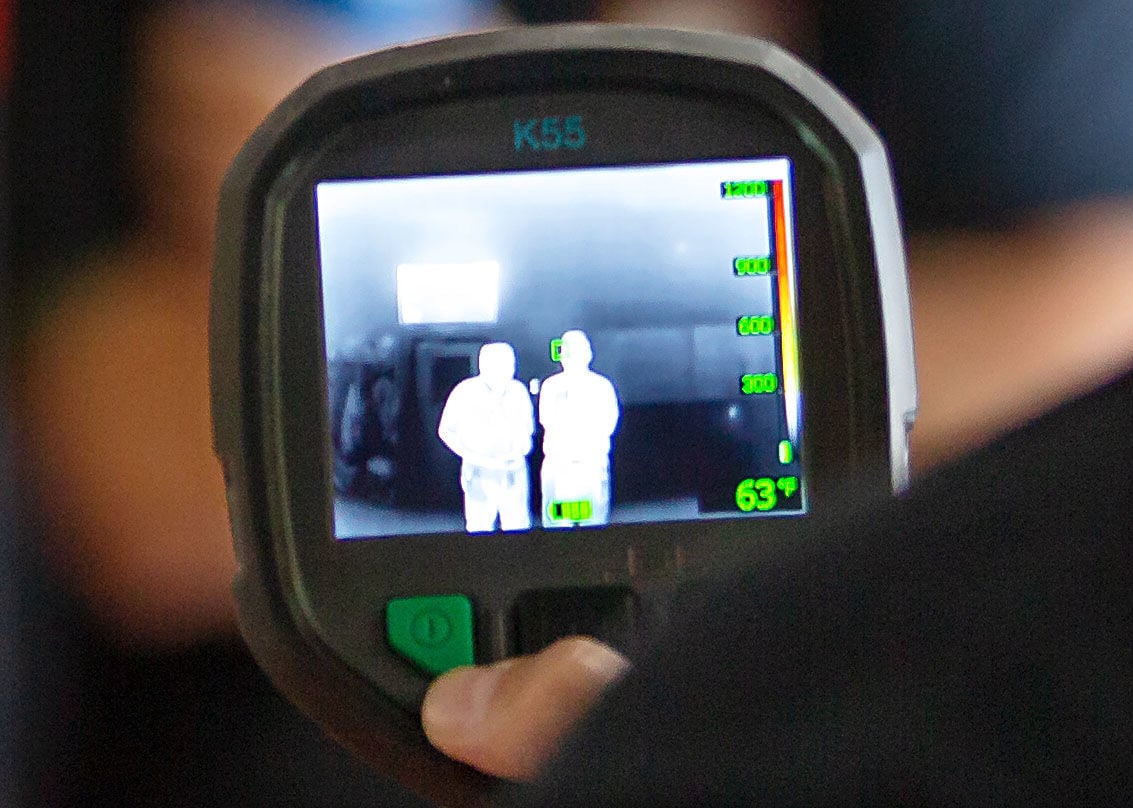 Thermal imaging devices use infrared radiation as visible light. Firefighters use the devices to see areas of heat through smoke, darkness, and walls. They also pick up body heat as displayed on this unit.

Thermal imaging devices use infrared radiation as visible light. Firefighters use the devices to see areas of heat through smoke, darkness, and walls. They also pick up body heat as displayed on this unit.

FRONT ROYAL — They’re another tool in the toolbox for the Warren County Department of Fire and Rescue Services.

“You can use them for just about anything,” said Ryan Baldwin, Warren County Firefighter and EMT, during a demonstration at the Front Royal Fire Station.

The cameras use color differences to register varying heat levels, Baldwin explained. The hottest is red, with a coffee pot showing more green, beyond a cooler blue.

One camera will be available to every piece of apparatus with the department, meaning at least one will be at every station, Baldwin said.

Baldwin demonstrated how the cameras could make a reading across North Commerce Avenue. The cameras cannot read through glass, which will reflect readings much like a mirror, Baldwin said.

After a blaze that engulfs a whole house is nearly extinguished or even before, instead of needing to tear through walls or ceilings to see if any potential flare ups remain, the cameras can read through the structure to find hot spots.

“This is a better idea of where it’s running,” Chief James Bonzano II said of fires trapped between walls.

If a room is filled with smoke, the cameras can cut through it and determine if there are any bodies present in a room that may need saving or a downed firefighter. Same thing during entrapments and tactical rescues.

“It cuts down a lot of the guessing,” Baldwin said. “It does define the body.”

The cameras cost about $4,600 a piece and were paid for by funds the county received from the state. The state obtains the funds by collecting a portion of home insurance premium payments, and then disburses them among localities based on a certain calculation, Fire Marshal Gerry Maiatico explained. The county gets about $80,000 a year in those funds for all system-wide needs within certain requirements, he said.

“The Board [of Supervisors] has continually allowed us to spend those funds for overall advancements of our fire and rescue system,” Maiatico said, adding the cost cutting benefit for taxpayers by using the funds.

The department previously had 13 cameras from a different company that cost about $9,000 to $10,000 a piece 10 years ago and had become obsolete. Flir did a one for one replacement of the old ones, offering a trade in value, but didn’t require the old units to be traded in.

“They made us a deal that we really couldn’t refuse,” Maiatico said.

The newer cameras have a sharper screen reading resolution, compared to the old cameras, as well as a zooming function. But the older ones still work, and they will still be used as some of the better ones will be given to the Front Royal Police Department and the Warren County Sheriff’s Office for their use.

“We can utilize the thermal imagery when a subject runs into a wooded area in the middle of the night,” Front Royal Police Department Maj. Kevin Nicewarner said. “Rather than officers running into that environment, take a step back, utilize a tool like this to be able to scan the area and see if we can find that heat signature in those woods, so you know where to target resources.”

Thermal imaging can thwart an ambush on an officer, and help with finding a dementia patient who may have gone missing and fell down in an area without needing to call out fire and rescue personnel, Nicewarner added. A flashlight won’t be needed when on the search for a suspect, Warren County Sheriff Office Capt. Robert Mumaw said.

During the demonstration, the cameras could read hotter temperatures from Officer’s Nicewarner’s shoulders than other parts of his body. That’s because his uniform was closer to the chest in that area, Baldwin explained.

While the cameras provide helpful insight on fire activity, Baldwin noted that sometimes double checking if a fire exists behind a hot or cold reading is still needed. Firefighting skills will still need to be used.

“You can’t 100 percent base everything you do off of what you see on this,” Baldwin.

Technology advancements, similar to smart phones of course exist, with options of having smaller cameras the size of a cell phone a firefighter can equip.

There’s also an option for mounting a camera on a breathing mask, which would bring it closer to the eyes, but that sometimes can be an impediment and also increase costs, Baldwin said.

“For us...you can probably get a good solid 10 years out of these before having any kind of maintenance or wear and tear issues,” Baldwin said, acknowledging the inherent risk of firefighting.