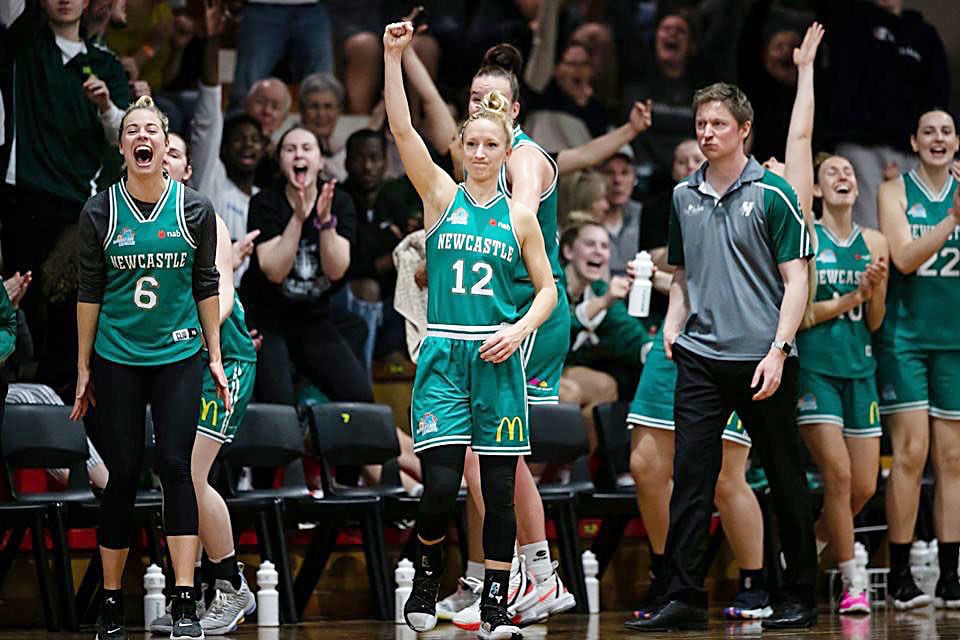 Kallie Hovatter (12) celebrates during a game for the Newcastle Hunters in an Australian women’s basketball league. The Hunters won the league title last year. 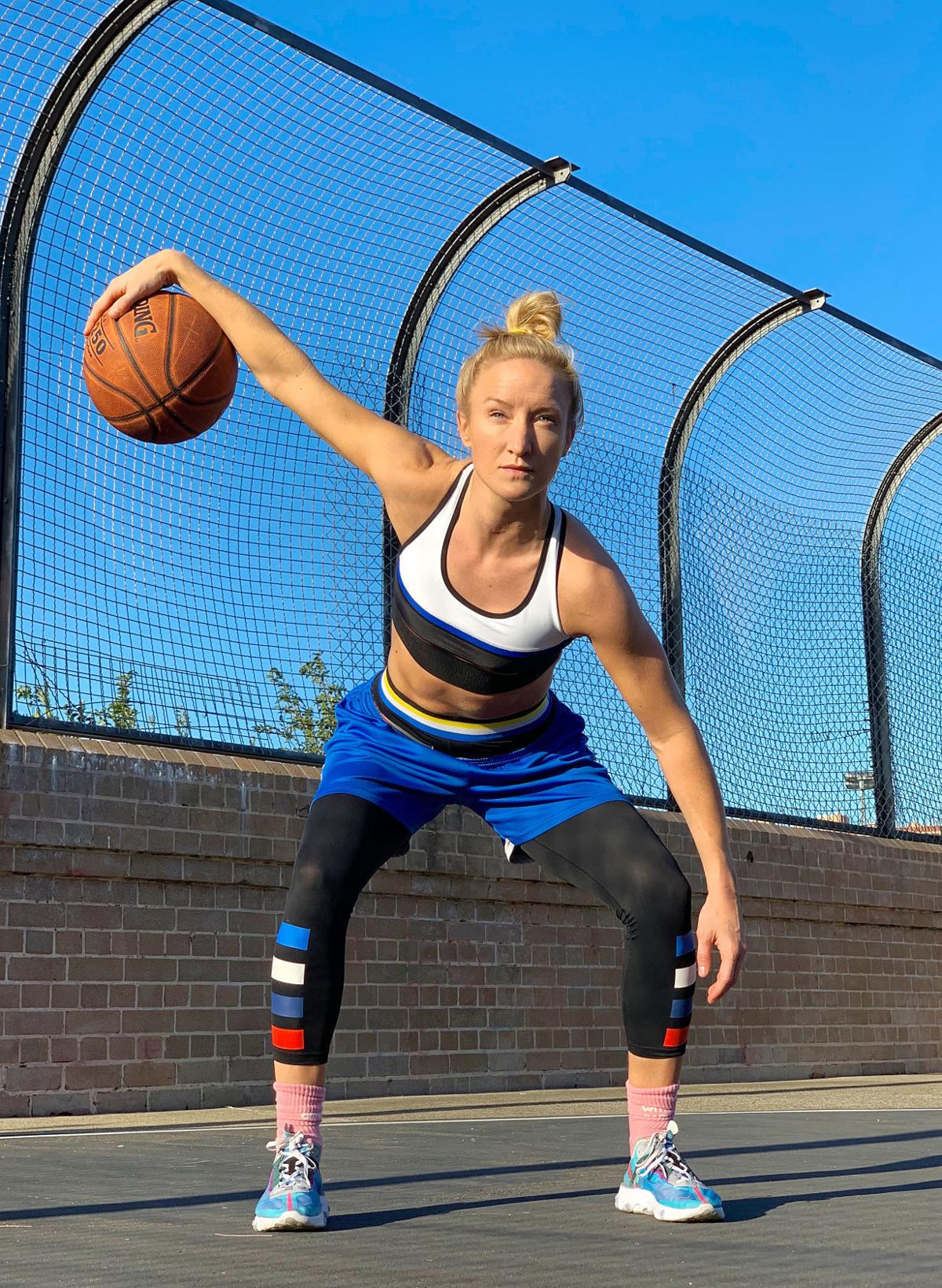 Kallie Hovatter works out in Sydney, Australia, where she lives. The Stonewall Jackson graduate has played women’s basketball for six years in Australia, and is now trying a new sport – Australian football. 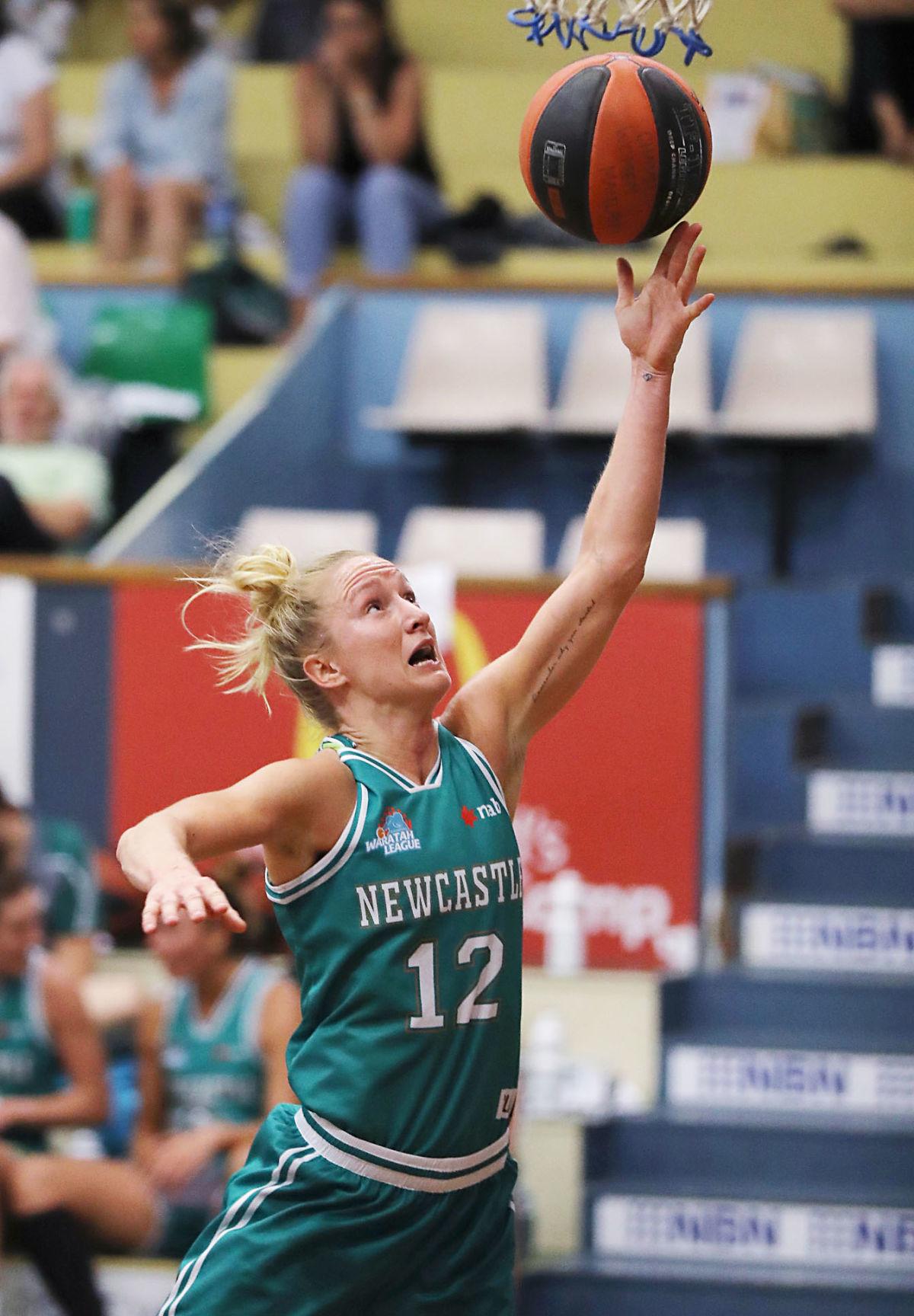 Stonewall Jackson graduate Kallie Hovatter goes in for a layup last season for the Newcastle Hunters. 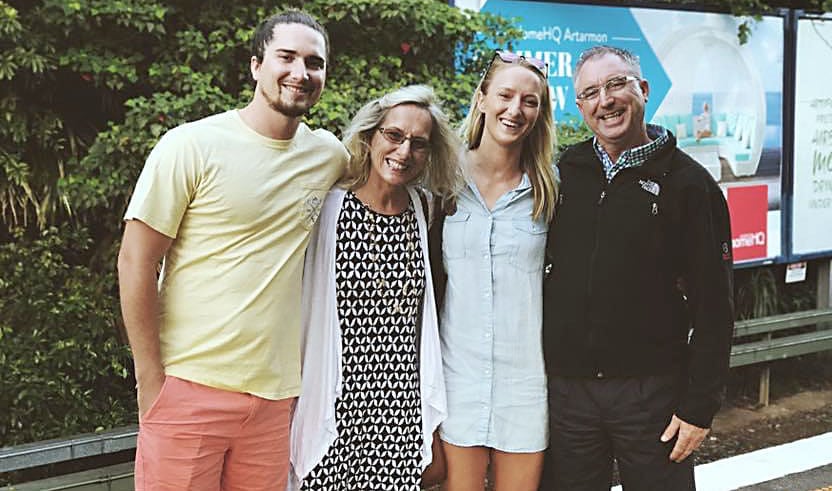 Kallie Hovatter (12) celebrates during a game for the Newcastle Hunters in an Australian women’s basketball league. The Hunters won the league title last year.

Kallie Hovatter works out in Sydney, Australia, where she lives. The Stonewall Jackson graduate has played women’s basketball for six years in Australia, and is now trying a new sport – Australian football.

Stonewall Jackson graduate Kallie Hovatter goes in for a layup last season for the Newcastle Hunters.

The game of basketball has taken Kallie Hovatter on a journey and she wouldn’t want it any other way.

The 2008 Stonewall Jackson graduate has been playing professional basketball in Australia for six years and now she’s ready to start a new sport and a new adventure.

“I’m learning to play AFL (Australian Football League) in Australia,” Hovatter said. “It is a preeminent sport in Australia and is the fastest growing sport for women right now. It is the best platform for women in sport because it is closer to allowing true athleticism to be celebrated without gender bias and it also allows equal pay for women in sport.”

Hovatter’s journey to Australia started when she was 9. At that time Central had an exchange student from Australia, Daniel Fischer, who made a big impression on Hovatter.

“When Daniel Fischer was in Woodstock, he was always around the basketball courts and close by (former longtime Central boys basketball) coach (Jerry) Walters and constantly working on his game,” Hovatter said. “This was so appealing to me, especially as a 9-year-old. Daniel used to teach me basketball drills and I would go home and practice them and come back and show him the next week that I had already mastered them. He made quite the impression on my young baller days. So roughly 15 years later, basketball reconnected our worlds.”

Hovatter, who lives in Sydney, Australia, went on to become the all-time leading basketball scorer in Shenandoah County history, boy or girl. She finished her career with 2,085 points, the only player to score 2,000 points. She led the Generals to the state semifinals in back-to-back years.

Hovatter was held to single digits only three times in her high school career. She originally went to St. Joseph’s College before transferring to Elon University, where she had a solid women’s basketball career.

Hovatter reconnected with Fischer and began playing for a women’s basketball team in Penrith in May 2013. Hovatter said she always wanted to play professionally overseas and she hasn’t stopped since arriving in Australia in 2013.

She has played for many teams in different leagues. She has also played in the 3x3 Pro Hustle, which is Australia’s only 3×3 basketball competition framework endorsed by Basketball Australia and FIBA and is the official pathway to representing Australia in International Events.

“The experience has been phenomenal,” Hovatter said. “I have had the opportunity to play with and against Olympians and seasoned professional basketball players from all around the world.”

Hovatter had success during her basketball career in Australia. Last year she played for the New Castle Hunters in the Waratah League and was part of their championship team. She averaged 7.2 points and 2.5 assists per game for the Hunters.

Hovatter said that she’s now excited to play in the AFL, where she plays for the North Shore Bombers.

“It is fun,” she said. “The beauty of this sport is that it highlights other sports all in one. It is a cross between football, basketball, soccer, and track and field with elements of tackling, kicking, dribbling, passing, and the freedom to run without limits.”

Hovatter said that she loves Australia and is happy that she was able to come there and play professional sports.

“Well, first off the health care system makes sense here,” Hovatter said. “Everyone looks after everyone with no one being left out. There is a sense of a ‘no worries mate’ culture. Australians value their ‘holidays,’ aka vacations, despite being so far away from the rest of the world. They get out and travel when there’s not obviously a pandemic, of course. It is an absolutely gorgeous country with beaches everywhere and an incredible landscape. The people are diverse, friendly, welcoming, and vibrant. I love it here.”

She said her basketball game has improved, but more importantly, she’s gained a new perspective on things.

“It means much more to me to have gained perspective and experience based on the sacrifices of being a female athlete,” Hovatter said. “For example, this last team I was playing for in Australia I was traveling three hours just to get to practice, after a full’s day work, which doesn’t include practice itself. But it led to a premier championship, which was a phenomenal experience and something I am grateful to have been a part of.”

Hovatter said she’s made so many great memories and has just enjoyed being in a different country.

“The best part of being in Australia has been immersing myself in an entirely new experience by learning a completely new culture and a way of life,” she said. “By allowing myself to being a part of something so new and so very different than what I am used to allowed me to truly understand vulnerability. And vulnerability to me has taught me resiliency and strength and true grit in life.”

Hovatter said that she is happy that she gets to do what she’s always wanted – to play sports and travel the world.

“I’ve always loved the game but what’s more is that I’ve always wanted to go places,” she said. “And luckily that orange ball allowed me to do that. Being from Conicville, Virginia, where there is no stoplight in my hometown to moving overseas in playing in beautiful Sydney, Australia is truly a blessing. I am very grateful.”

Hovatter said that her mom Joanie, dad Sonny and brother Phillip have come to visit but she certainly still misses being away from home.

“I miss my family every single day,” Hovatter said. “I stay very deeply connected to them through technology, which thank goodness for. We try and see one another at least once a year or sooner if possible. Most importantly though, none of this would have been possible without my family’s love and support. My family and in particular my grandfather Ray Baker always emphasized the love of family. I have learned that when we have each other we have everything no matter where we are.”