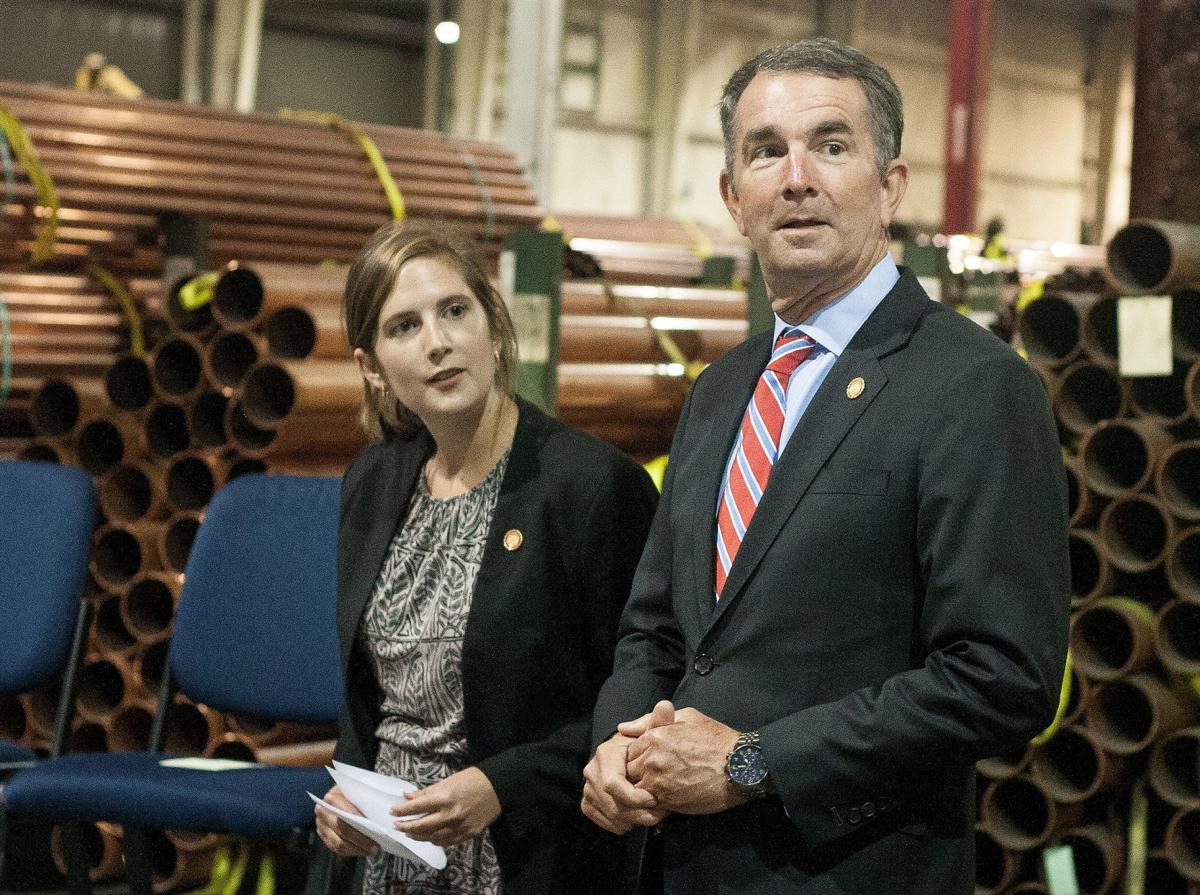 ABOVE: Gov. Ralph Northam, right, and Turner Widgen, special assistant to the secretary of commerce and trade, prepare to go onto the stage in the Howell Metal factory in New Market to announce the plant’s expansion plans. RIGHT: Northam presents a Virginia flag that flew over the Capitol to Devin Malone, president of Mueller Streamline Co., Howell Metal’s parent company. 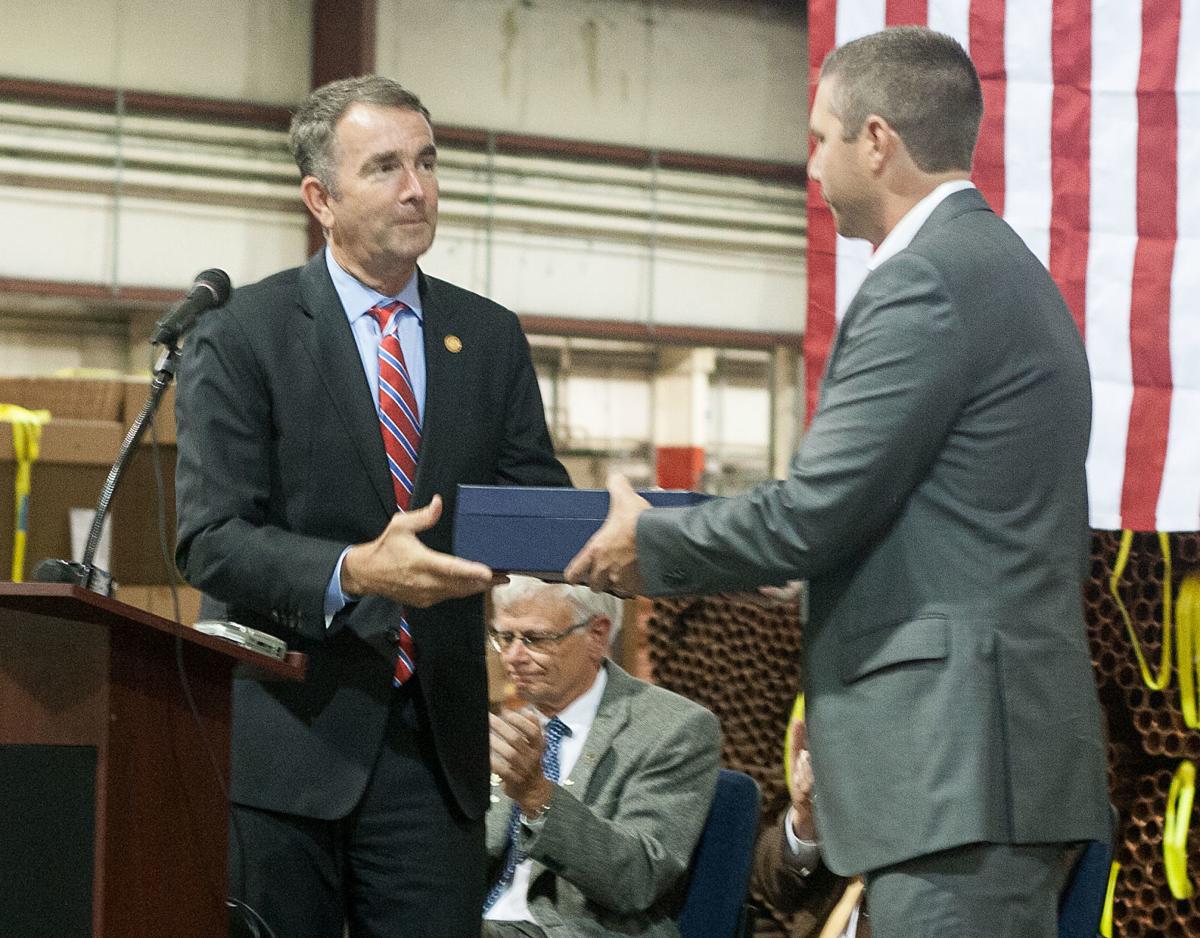 ABOVE: Gov. Ralph Northam, right, and Turner Widgen, special assistant to the secretary of commerce and trade, prepare to go onto the stage in the Howell Metal factory in New Market to announce the plant’s expansion plans. RIGHT: Northam presents a Virginia flag that flew over the Capitol to Devin Malone, president of Mueller Streamline Co., Howell Metal’s parent company.

NEW MARKET – Inside the cavernous Howell Metal factory in New Market, employees huddled shoulder to shoulder with county leaders, a U.S. congressman and the governor of Virginia on Tuesday afternoon to hear about the newest economic development news to sweep into the county.

Gov. Ralph Northam announced that Howell Metal is investing $8 million to expand its operations in New Market, taking up an extra 200,000 square feet and adding more than 100 jobs over the course of the project.

“A lot of people ask me about what my top priority is as the governor here in Virginia,” Northam said. “And really, it’s very simple. It’s about jobs. We want to make sure that all Virginians have a job that can support themselves and their families.”

Earlier this summer, the CNBC news channel touted Virginia as the No. 1 state for business in the country. Northam said that his administration has been tracking Virginia’s slow ascent to that top spot and it was thanks to investments such as the one Howell Metal committed to that the state was able to regain the No. 1 ranking, which it held last in 2011.

U.S. Rep. Ben Cline, R-6th District, commended Virginia’s business-friendly laws and statutes as beacons that attract investment all over the state and especially in rural areas.

“This is not the first time we’ve been ranked the top state to do business in and we’re glad to be back on top,” Cline said. “And that’s because of several policies that we’ve protected over the years.”

Cline said Virginia’s status as a Dillon Rule state prevents local regulations from choking out businesses and its right-to-work status protects employees who choose to, or not to, join a union.

“You would not see the kind of investment we see in Virginia were it not for those policies that deregulate, that keep taxes low, that make sure we have a AAA bond rating,” he said. ”Those all contribute to that positive atmosphere that encourages businesses to come here.”

Howell Metal has operated in Shenandoah County for more than 50 years and is one of the largest employers in the county.

Virginia and Shenandoah County have experienced record low levels of unemployment in recent months, boding well for the business environment but potentially rebuffing more investment for fear of a lack of a workforce.

Devin Malone, president of Howell Metal’s parent company, Mueller Streamline Co., said low unemployment is a good thing and that Howell is ready to invest here, sure that the workers would come.

“Low unemployment makes it challenging for everyone right now,” Malone said. “We feel like investing in our capabilities and providing avenues for growth for our employees to advance their skill set will allow us the opportunity to provide jobs, unlike jobs other people in the county can provide.”

Construction on roughly 200,000 square feet has already begun, Malone said. The project will take 24 months from beginning to end but the first phase is almost complete as construction has hit the six-month mark. Malone said the expansion will create more than 100 new jobs, some of which have already been filled.

Howell Metal partnered with the governor’s office, receiving $400,000 from the commonwealth’s opportunity fund. Other benefits include sales and use tax exemptions on manufacturing equipment and benefits from the Port of Virginia Economic and Infrastructure Development Zone Grant Program.

New Market Town Manager Todd Walters said he is excited about the investment and opportunity Howell Metal’s growth means for the town and for the county as a whole.

Technically, Walters said, Howell Metal is not within the town boundaries, though the town does provide water services for both Howell Metal and Kennametal next door. Regardless, Walters said, because of its proximity to the town, the investment and expansion are good news.

“I think I’ve said this one hundred times but anything that is good for Shenandoah County is good for New Market,” Walters said. “I think anything like this is good for everybody.”