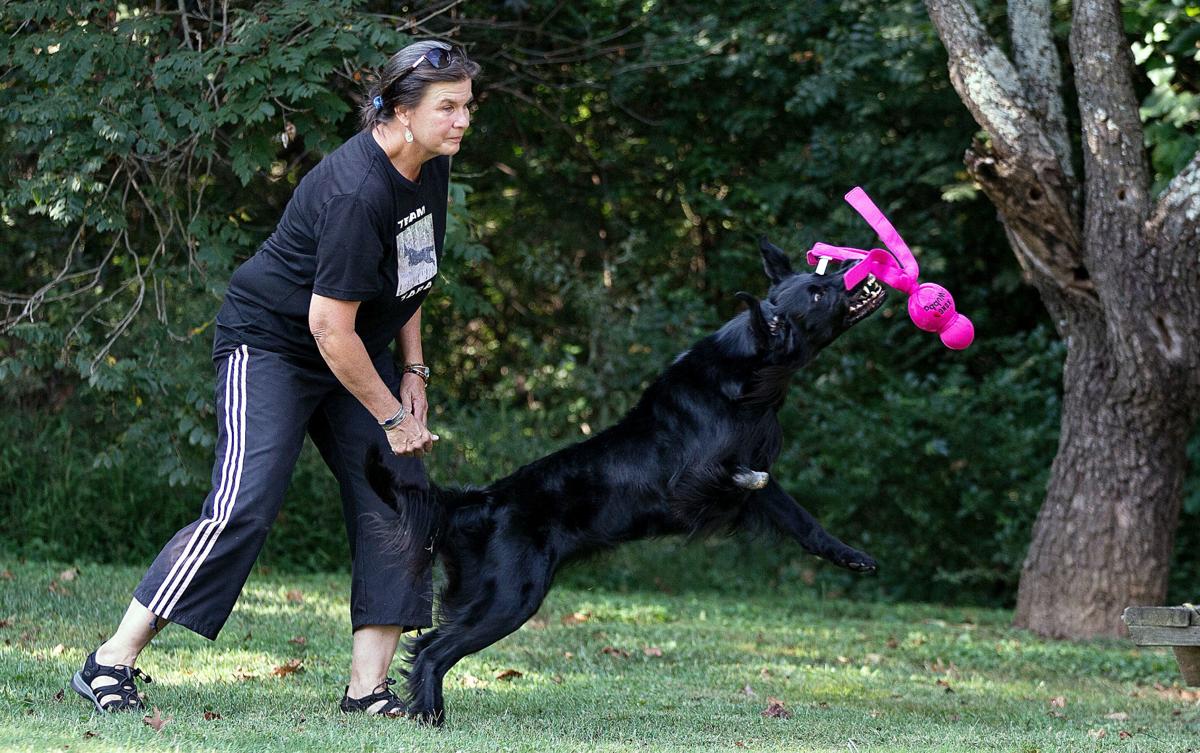 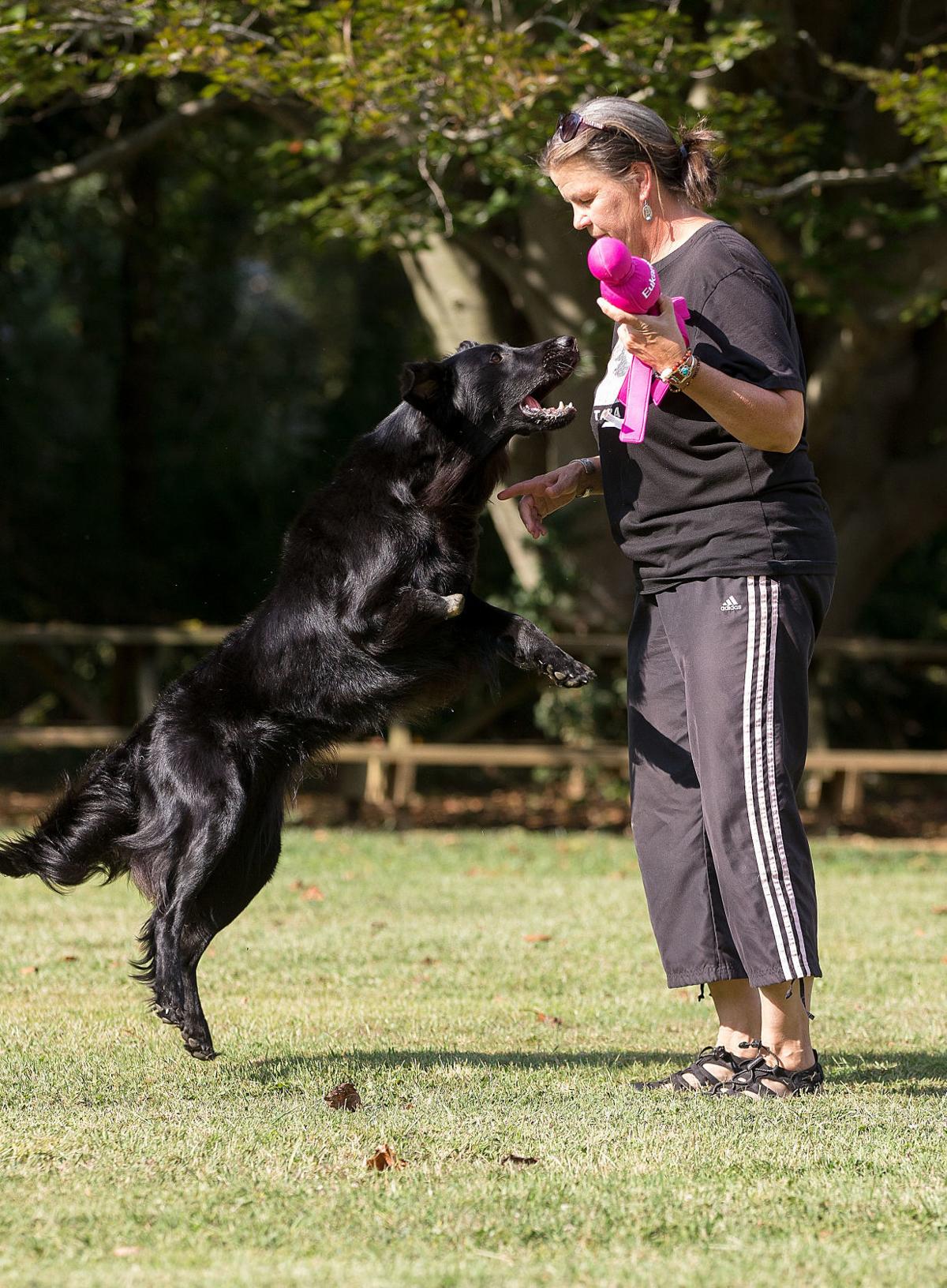 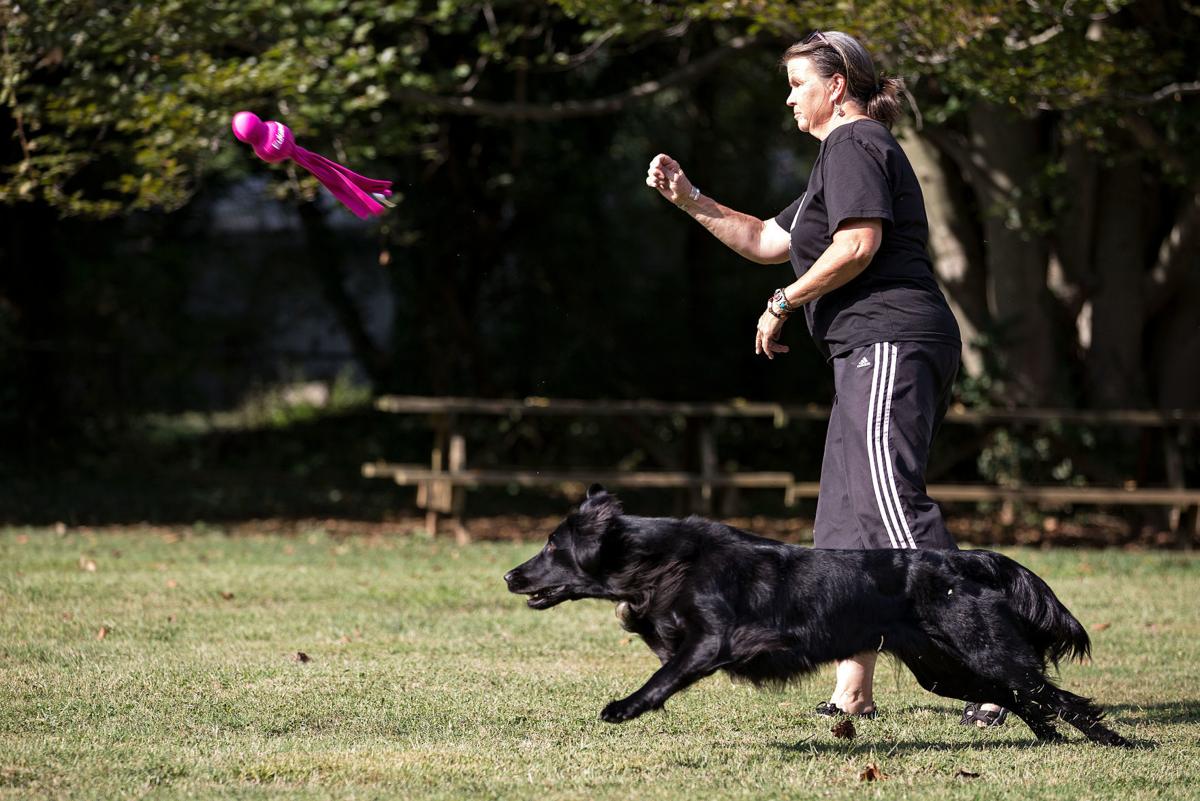 FLINT HILL – Mary Pat Corrigan, the owner of Blue Moon Wellness in Flint Hill, has been training her dog Tara for close to three years to be a canine athlete.

Known as the “No Limits Tri-Paw,” Tara, a 3-year-old flat-coated retriever, has had a short front leg since birth.

“She really shouldn’t be alive,” Corrigan said. “They didn’t think she was alive when she [was born.]”

Corrigan, who specializes in animal massage therapy, was a life-long athlete herself, participating in sports like karate and running. Corrigan’s passion for athletics eventually led her to begin training dogs in the early 1990s.

“Since I was fortunate to learn from some phenomenal people, I was able to apply that to some great dogs, who taught me how to teach them,” she said.

Corrigan said she had done massage therapy on Tara’s mother Macy. She said that professional dog handler Angela Loyd had contacted Corrigan after Macy had given birth to eight puppies.

“Angie had called me and left me a message about this puppy she thought that was really special,” she said.

Corrigan said she was hesitant about owning another dog after her previous dog passed away eight months prior. She said that Lloyd had not told her any information about the puppy.

“I was sitting with these puppies and, all of a sudden, there was this loud screech and I turn around and there’s this puppy actually screeching at me to get my attention,” Corrigan said. “I looked over at her and she was just staring at me. She picked up her little foot and showed it to me and it was like, I knew who she was. I recognized the soul.”

Corrigan said that Tara has loved the water since the beginning. She said Tara was in the pond behind her house since she was old enough to swim in it.

“Her breed is a water breed,” she said. “They’re known for loving the water. She’s been obsessed with the water from day one.”

Corrigan said Tara was “swimming around like an otter” when she was 3 months old, despite her shorter leg.

“It’s amazing,” she said. “I was wondering if she was going to swim around in a circle because she only has one paddle.”

Corrigan said she took Tara with her on a job in Richmond, where there was a dock diving competition in which dogs compete in jumping for distance or height from a dock into a body of water. While Tara was too young to compete at that point, Corrigan said she found an event that was straight up Tara’s alley.

Corrigan said Tara was competing against dogs that didn’t have the same handicap her dog did. She said Tara has competed in over 30 competitions, but winning is the farthest thing from her mind.

“She just wants to go, have fun, and do it as long as she can,” Corrigan said. “It’s her favorite thing in the whole world.”

Corrigan said she treats Tara like a normal professional athlete by having her on a good diet and doing physical therapy. She admitted that she does still keep an eye on Tara to make sure she doesn’t hurt herself.

“I allowed her to figure out her body as it is,” Corrigan said. “She lives on a big farm. She runs after the rabbits. She does all these different things. Sometimes I hold my breath. It’s a fine line to try to balance. I don’t want to be overly protective, but I don’t want to be stupid about it either.”

“There are other ground training [exercises] I could do with her if she were a four-legged dog,” she said. “I have to be more creative when training a three-legged dog so I don’t overlook that one front leg.”

Corrigan said one of her fondest memories of Tara competing was during a competition in 2017. She said that she and Tara were waiting to compete when Corrigan noticed two little girls were looking at Tara’s leg.

“I told them they could come up and look,” Corrigan said. “It’s good for kids to be curious about some of these things but they’re kind of always told not to look. One [of the girls] leans over and touched her leg. The older girl asked a couple of questions and the younger girl asked if it was a disability. I asked her if she was going to watch the dogs jump off the dock and she said yes. I told to watch her jump and you tell me if it’s a disability.”

Corrigan said the girl watched Tara, who was jumping first in the competition.

“As [Tara’s] swimming back, I look over at the girl and she’s hanging over the edge and watching her and her eyes are really big,” she said. “[The girl] looks up at me and I asked what did she think. The little girl looked right in my eyes and said ‘no way’ and it was so inspiring.”

Corrigan said that Tara has been an inspiration for both people and animals.

Corrigan said she has encouraged people with pets who have physical challenges to let them do more physical activities but also be aware that those activities do have a little more wear and tear on the pet’s body.

“If you have dogs or horses that have physical challenges but they are willing to do these things, you can let them do them,” she said. “Let them figure their body out. That is key. They’ve got to figure out their body.”