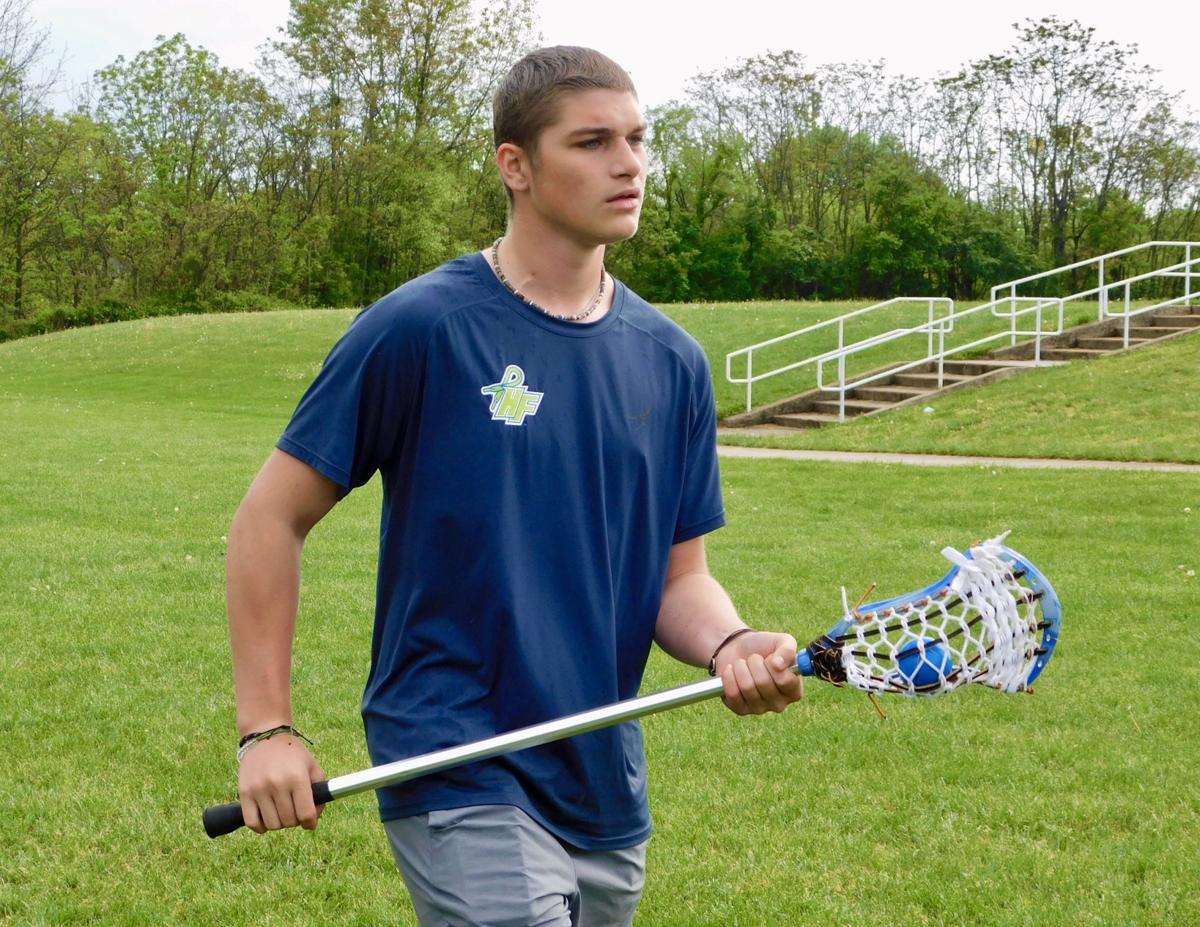 James Wood High School junior David Alexander III had to stop playing lacrosse in October after being diagnosed with a rare and fatal form of cancer. The 17-year-old now serves as an assistant coach for Handley High School's lacrosse team and assisted with practice on Tuesday evening on the athletic field behind Daniel Morgan Middle School.

David Alexander III, left, an assistant coach with Handley High School's lacrosse club, conducts passing drills on Tuesday with team member JaVan Butler Sydnor. David learned in October that he has chondroblastic osteosarcoma, a rare and aggressive form of cancer. Since there is no cure for the disease, the 17-year-old decided in January to stop pursuing treatment and enjoy the life he has left.

James Wood High School junior David Alexander III had to stop playing lacrosse in October after being diagnosed with a rare and fatal form of cancer. The 17-year-old now serves as an assistant coach for Handley High School's lacrosse team and assisted with practice on Tuesday evening on the athletic field behind Daniel Morgan Middle School.

David Alexander III, left, an assistant coach with Handley High School's lacrosse club, conducts passing drills on Tuesday with team member JaVan Butler Sydnor. David learned in October that he has chondroblastic osteosarcoma, a rare and aggressive form of cancer. Since there is no cure for the disease, the 17-year-old decided in January to stop pursuing treatment and enjoy the life he has left.

David has chosen to die.

The James Wood High School junior's final day could come tomorrow or in a decade, depending on how the cancer progresses. However long he has, though, David is determined to live on his own terms, which means staying active and enjoying every moment.

"I feel like everyone else would do the same thing if they were in my spot," David said this week.

On Oct. 2, doctors at the University of Virginia's University Hospital in Charlottesville diagnosed David as having chondroblastic osteosarcoma, a rare form of cancer that destroys bone and replaces it with cartilage. It's incurable but can be slowed by a combination of surgery and chemotherapy.

"It took two separate biopsies to figure out specifically what kind of cancer he had," said David's mother, Jackie Alexander.

David tried chemotherapy, enduring the nauseating, physically crippling medication for 10 weeks. When it was all said and done, though, the cancer was still there.

If he wanted to give chemo another try, doctors said they would have to remove all the tumors in his left hip, right hip, around his spine and in his chest and lungs. The surgery would permanently disable David, a standout player on Handley High School's regional lacrosse club, because doctors in Charlottesville would need to remove his left leg and portions of his left hip and lower spine. There was a strong possibility that he could end up paralyzed, and he would have to stay in Charlottesville for several more months to receive the second round of chemotherapy.

The chances of surgical success were minuscule at best. If even one microscopic cancer cell remained in David's body, the cancer would almost certainly continue to grow. And chemotherapy could not cure the disease, only slow its spread until doctors could figure out another course of action.

"In my eyes, there really was not a lot of promise," David said.

In January, he made the decision to manage his pain as much as possible and enjoy whatever time he has left with family and friends. How long that will be, though, is anyone's guess.

Jackie said she and her husband, Bryan Alexander, respected their son's decision because it's his right to decide how he wants to live the life he has been given.

"The way I see it is, we wake up every morning and we leave our houses to do whatever duties we need to do. We're not guaranteed to come home," she said. "The fact that he was mature enough to think things through and say, 'My choice is to see my family, my loved ones, and do the things that I love to do while I can,' means so much."

For now, David said, "I feel perfectly fine. I'm walking around and I can see anyone that I want."

He said he returned to James Wood High School two weeks ago and "hopped right back in."

David won't always look and feel so healthy, but while it lasts, he is determined to enjoy life as much as possible. He hopes to graduate next summer with James Wood's Class of 2022, and a special prom is being arranged for him and his friends to attend later this spring in the parking lot of First Christian Church on Merrimans Lane.

David said his friends and teachers are treating him the same as always, which is great because he's not a fan of sympathy.

David's also remaining active with Handley's lacrosse club but in a different capacity. Since he can no longer run for hours on end during practices and games, he instead serves as an assistant coach.

When David attends practices, he is supposed to remain seated or, at the very least, use a walker to minimize the risk of breaking his cancer-ridden bones. But that's a tall order for a physically fit, athletically gifted teenager, so he sometimes overlooks his doctors' advice and picks up a lacrosse stick for some one-on-one training drills with members of his team.

"I'm getting around very, very easily," David said. "I'm going to school every day, I've been coaching and I haven't really had to use my walker or my wheelchair, so it's going really well."

David's health crisis has touched many of his fellow lacrosse lovers. On March 6, he was a guest of the University of Virginia's men's lacrosse team as it faced the United States Air Force Academy in Charlottesville (U.Va. won, 20-4), and the special prom planned for him later this spring is being arranged by the HEADstrong Foundation of Philadelphia, which was founded in 2006 by cancer victim and former lacrosse player Nicholas "Head" Colleluori.

"The lacrosse community as a whole has been overwhelmingly helpful," Jackie said.

Jackie and Bryan Alexander are less than two weeks from their 18th wedding anniversary. They'll celebrate the occasion with David and their daughter, Frederick County Middle School eighth-grader Aubrey Alexander.

"Occasionally she breaks down," Jackie said about her daughter's response to David's cancer, "but more so, she just holds it together and we live our daily lives like we always have. ... Just because David has a diagnosis and it's terminal doesn't mean that we can't live every day like we did beforehand."

That's exactly what David said he wants. One of the reasons he decided to abandon treatment is because he didn't want to put his family through the months or years of strain and emotional turmoil brought about by medical appointments, surgeries, chemotherapy and the ever-looming prospect of the cancer flaring again.

"I'm happy with the decision I made," David said.

The Alexanders have established a Go Fund Me account to help with David's ongoing medical expenses. Money is also being raised on behalf of the family by the nonprofit support organization Team Mathias of Leesburg.