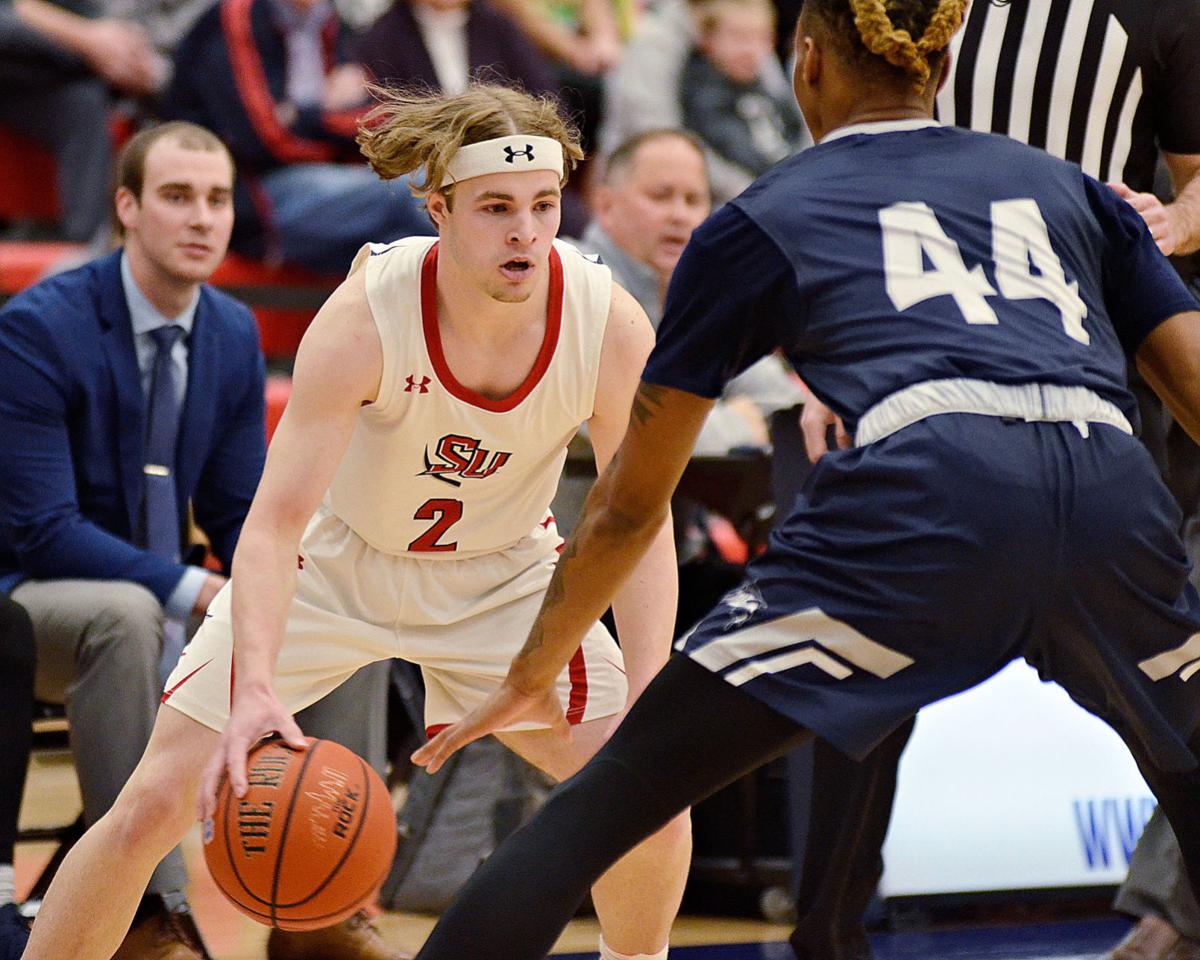 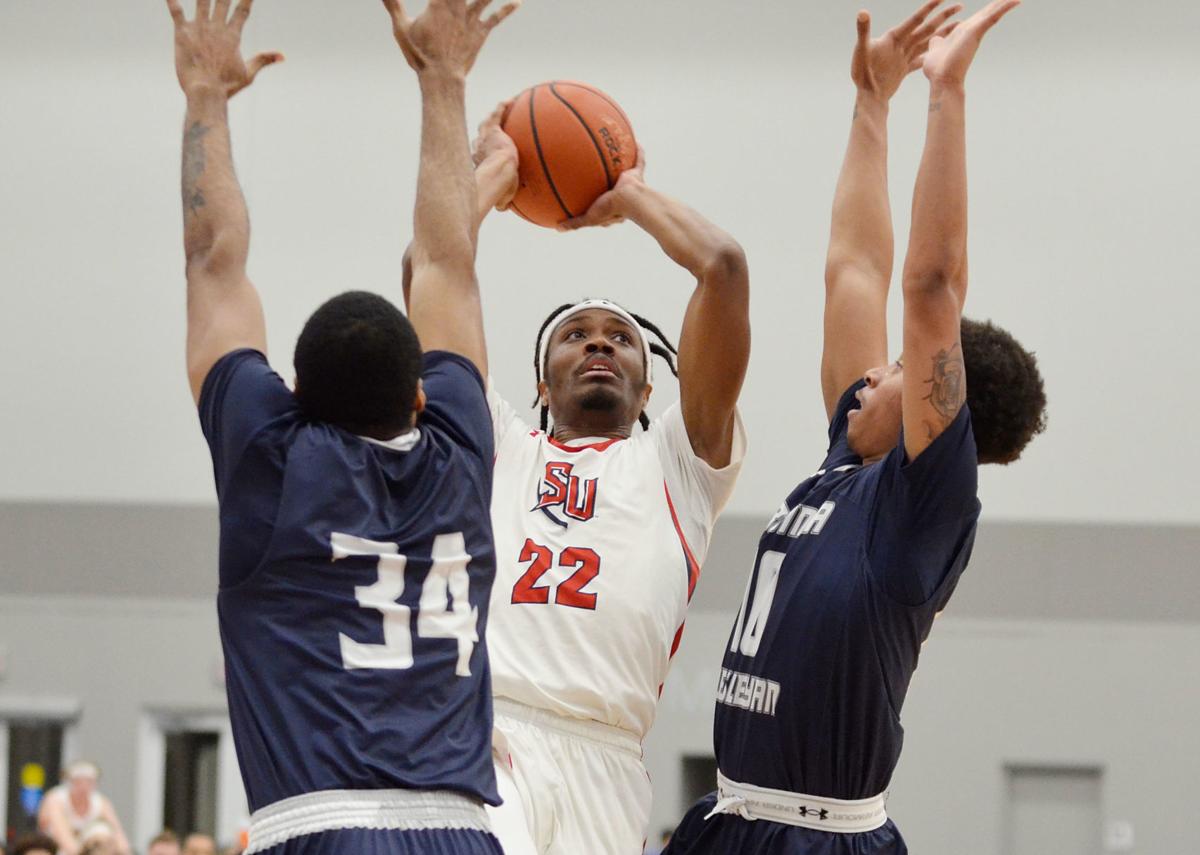 WINCHESTER — For Shenandoah University’s men’s basketball program, there are steps that need to be taken to become a contender in the Old Dominion Athletic Conference, and head coach Adam Walsh said recently that the Hornets are in the position of a bottom-third program fighting to become a .500 team.

Through the first 15 games of the 2019-20 season, Walsh’s third at the helm, Shenandoah appears to be making progress in its quest for relevancy in a competitive conference.

The Hornets are just 5-10 overall and 2-4 in the ODAC after Wednesday’s 71-55 loss at home to 23rd-ranked Virginia Wesleyan, and Shenandoah still has plenty of territory yet to travel in conference play over the next month, but SU has shown itself to be less of a pushover than it was a season ago.

Walsh said on Thursday that, all things considered, he feels SU is in a “good place where we are” and are taking the steps necessary to become a part of the conversation in the ODAC.

“Sure, I’d like to have 10 wins right now, and I think we could’ve. And you always look back,” said Walsh, who noted that SU was three possessions away from starting conference play 4-0 after suffering close losses to Hampden Sydney (by 5 points) and Eastern Mennonite (by 1 point) on Dec. 7 and Jan. 8. “Some guys need to lose games before they can win games, and we’ve got to be in games before we can win games. … Our scores are better. I think we’re more competitive, so that means we should win a couple more.”

Shenandoah’s ability to remain competitive through a mounting pile of injuries is a testament to the Hornets’ resiliency, said sophomore guard Zach Garrett, who missed Wednesday’s game due to illness but is the least of SU’s health concerns.

Sophomore point guard Jaylen Williams, the ODAC’s Rookie of the Year last season, was lost for the season after one game and is now recovering from surgery to repair a torn meniscus. Walsh said another point guard, freshman Davion Roberts, suffered cartilage damage in his knee and is also out for the year.

Yet another guard, junior Avery White, has missed action due to a torn tendon in his finger and could be limited by the injury all season, Walsh said, and senior forward Chris Chaney, the Hornets’ leading scorer and rebounder, became Shenandoah’s latest casualty when he suffered an ankle injury against Virginia Wesleyan, the extent of which Walsh was unsure of on Thursday.

Walsh said Chaney will miss at least Saturday’s game at Washington and Lee, and any extended absence for the senior would certainly be a big blow to the Hornets. But as of Thursday, Walsh said the injuries to Williams and Roberts loomed largest, as it decimated SU’s backcourt and left a team that began the year with five point guards with just one primary ball-handler in sophomore Harry Wall.

“I would say those two injuries and the consequences of those have been the most severe,” Walsh said.

Shenandoah’s shallow depth at guard and a shift to a forward-heavy style has completely changed floor balance and spacing, Walsh said, and the head coach added that six players of SU’s top eight players aren’t shooting the ball well enough from the perimeter to serve as anything more than an interior threat on the offensive end.

That’s created a logjam among players battling for minutes on the floor, Walsh said, as those six are struggling to separate themselves from the pack.

Walsh admitted that SU’s coaches are “asking a lot” from those forwards, as the team needs some of them to develop the versatility to play upwards of three different positions, sometimes all on a single possession.

“Our players are doing a very good job with the hand that we’ve been dealt,” said Walsh, who added that the Hornets have been helped by the increased gym time while not having to worry about school during winter break. “I would like for more of those six forwards to be perimeter threats. They’re trying and they’re getting up shots. … They’ve gotten better and I think you see that statistically. Our players have gotten better as the season’s gone on individually. That’s a good sign.”

Entering Saturday’s game at W&L, Chaney (16.1 points, 9.2 rebounds per game) is the only Hornet averaging more than 8 points per game. Freshman forward Jalen Hill is SU’s second-leading scorer (8 ppg) and rebounder (5.2 per game), and senior forward Alan Dabney is right on Hill’s heels at 7.9 ppg.

At the start of the season, Walsh said Shenandoah needed to be better in three primary areas: assists, 3-point shooting and 3-point defense. Through 15 games, the Hornets are averaging 11.4 assists per game (up from 9.4 last season), are posting a 31-percent shooting mark from deep (up from 25.9 percent) — SU is shooting 38.7 percent from beyond the 3-point arc in conference play, the second-best mark in the ODAC – and are holding opponents to 31.3 percent from three (down from 38.3 percent).

Walsh also praised his team’s competitiveness in losses to top-30 ranked teams Christopher Newport and Augsburg (in a tournament in Puerto Rico) earlier this season and said he was happy to play Roanoke — one of three ODAC teams with a 5-1 conference record behind frontrunner Randolph-Macon (6-0 in ODAC) — to a three-possession game on the road in a 77-69 loss to the Maroons on Saturday.

“With a young group, I think I like it,” Walsh said. “Obviously we want to win. I’m frustrated by a couple losses that we’ve had where we could’ve won. But then games that we haven’t won, I think we’ve had something to take away in everyone.”

Walsh noted that Shenandoah is now in the part of the season that has traditionally plagued the Hornets: the middle of ODAC play. SU lost 10 straight conference games to end last season, and Shenandoah enters Saturday having lost three straight contests, all in the ODAC.

Cal Thomas: Who is divisive?