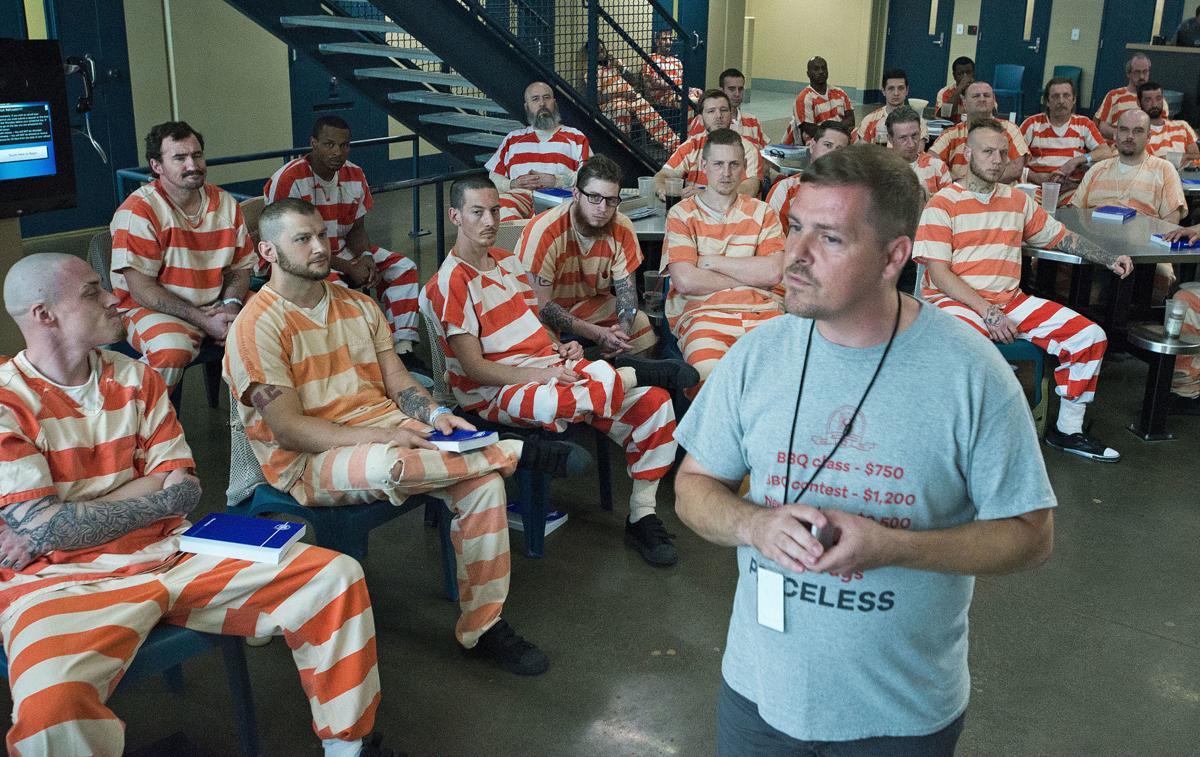 Christopher Ronquest, director of the McShin Peer to Peer counseling program at Rappahannock-Shenandoah-Warren Regional  Jail, speaks to inmates during a recent counseling session. 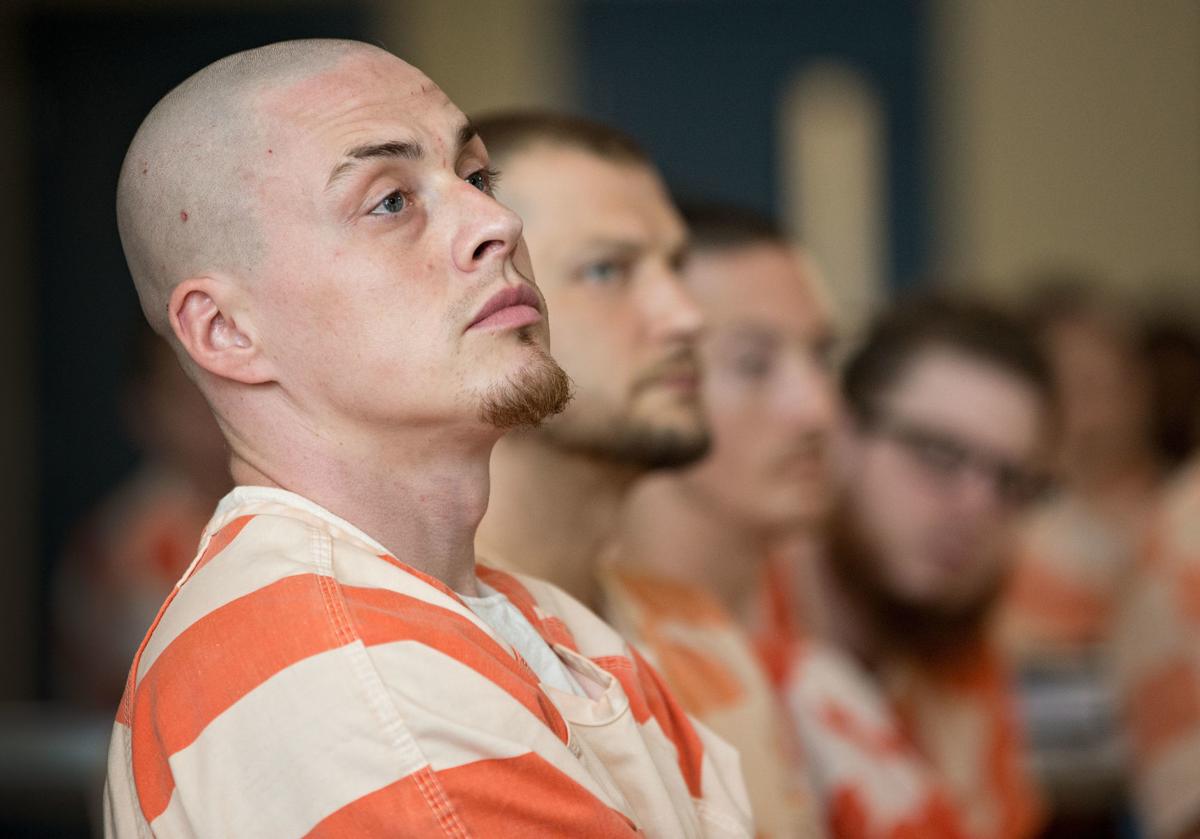 Christopher Kerns, 30, of Woodstock listens during a peer-to-peer session. 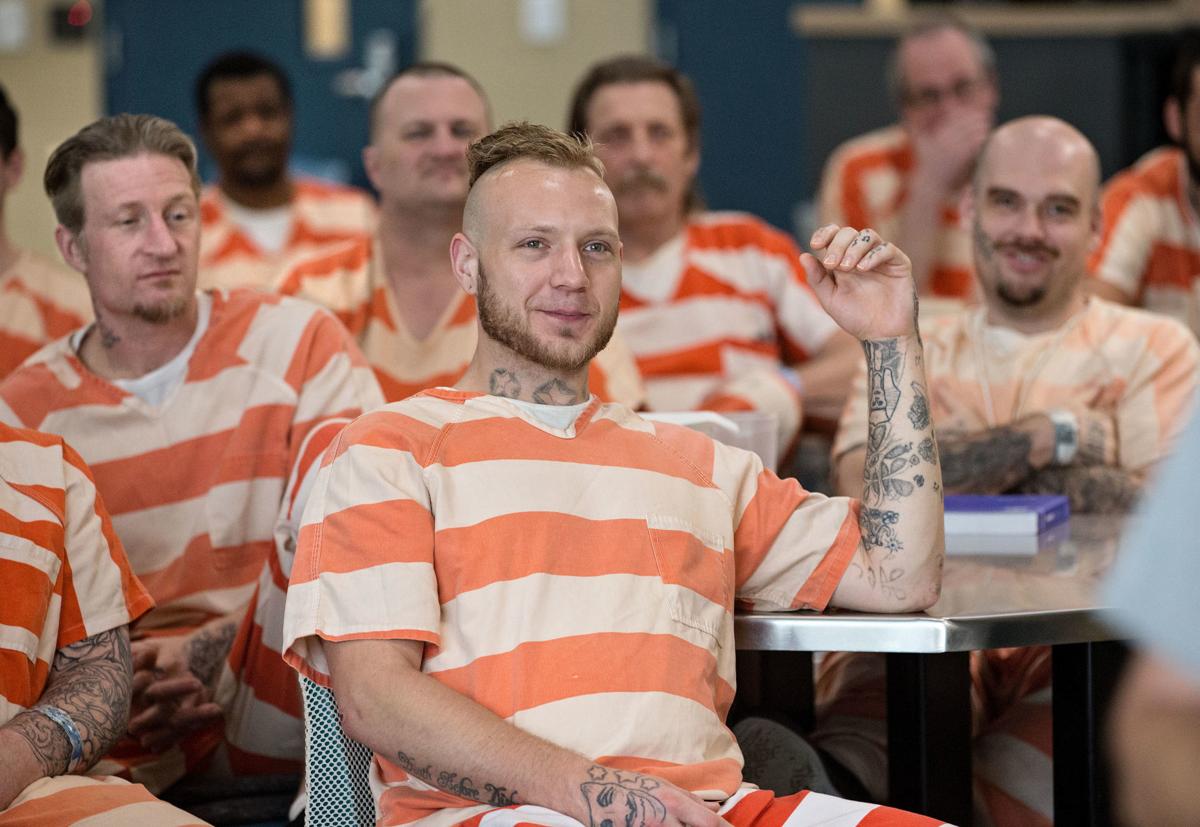 Dakota Reedy, 25, of Harrisonburg, grins during a light moment of the session. 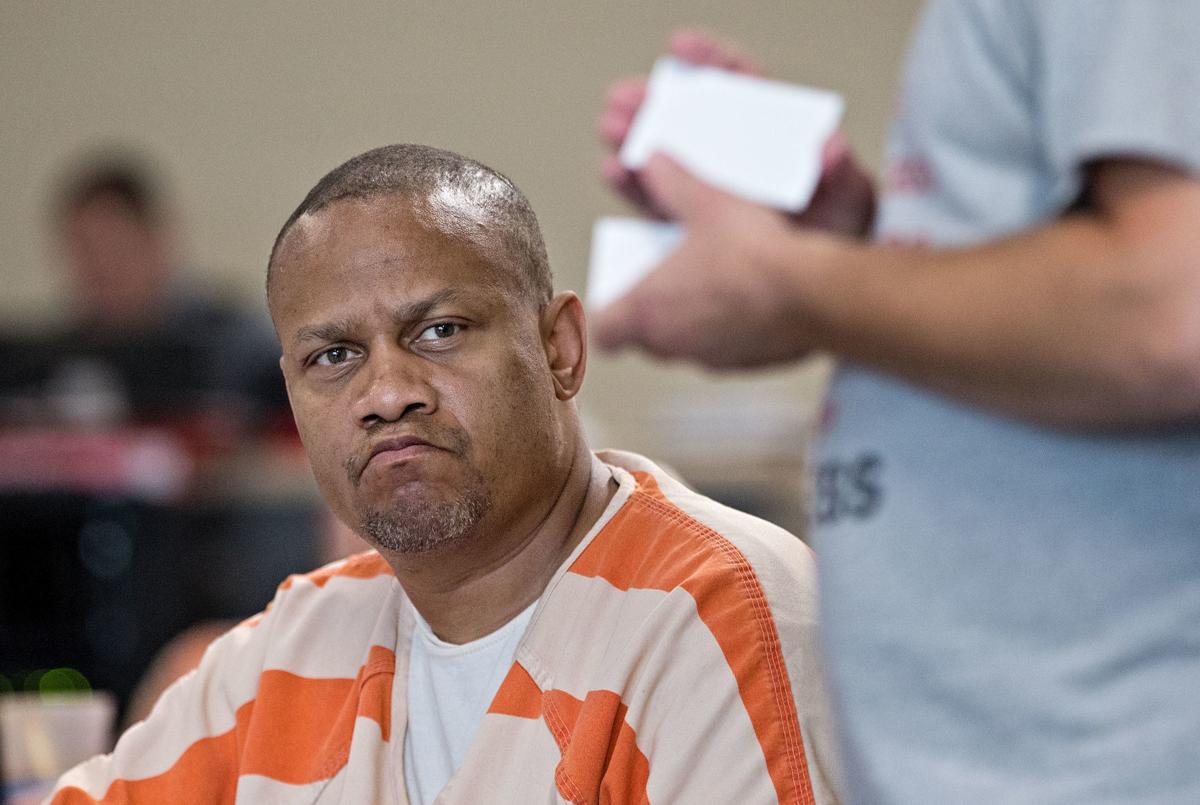 Pharris Horne, 48, of Strasburg, listens as Christopher Ronquest shuffles cards during his presentation. 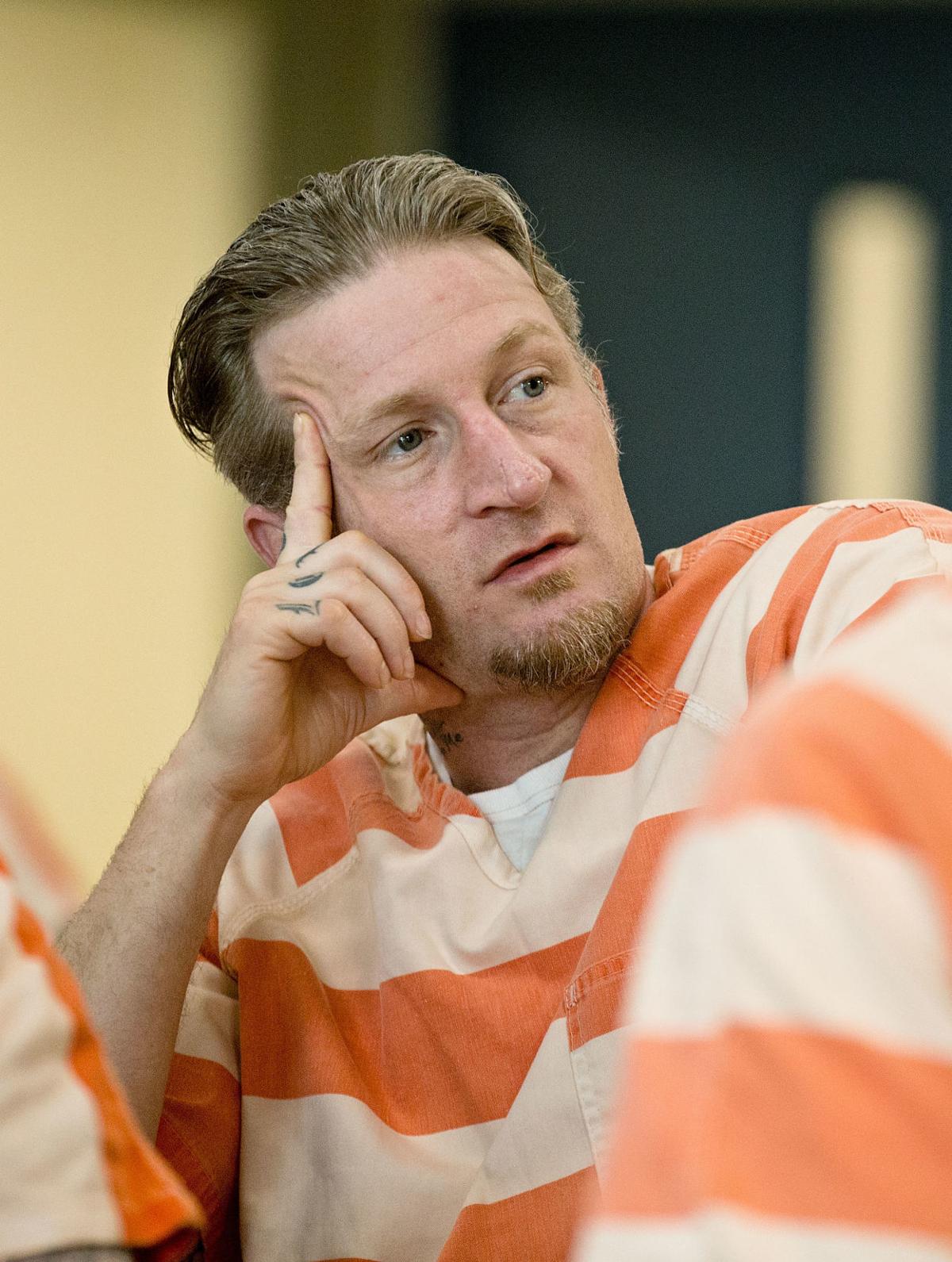 Jeremy Miller, 41, of Strasburg, sits in on the group meeting. 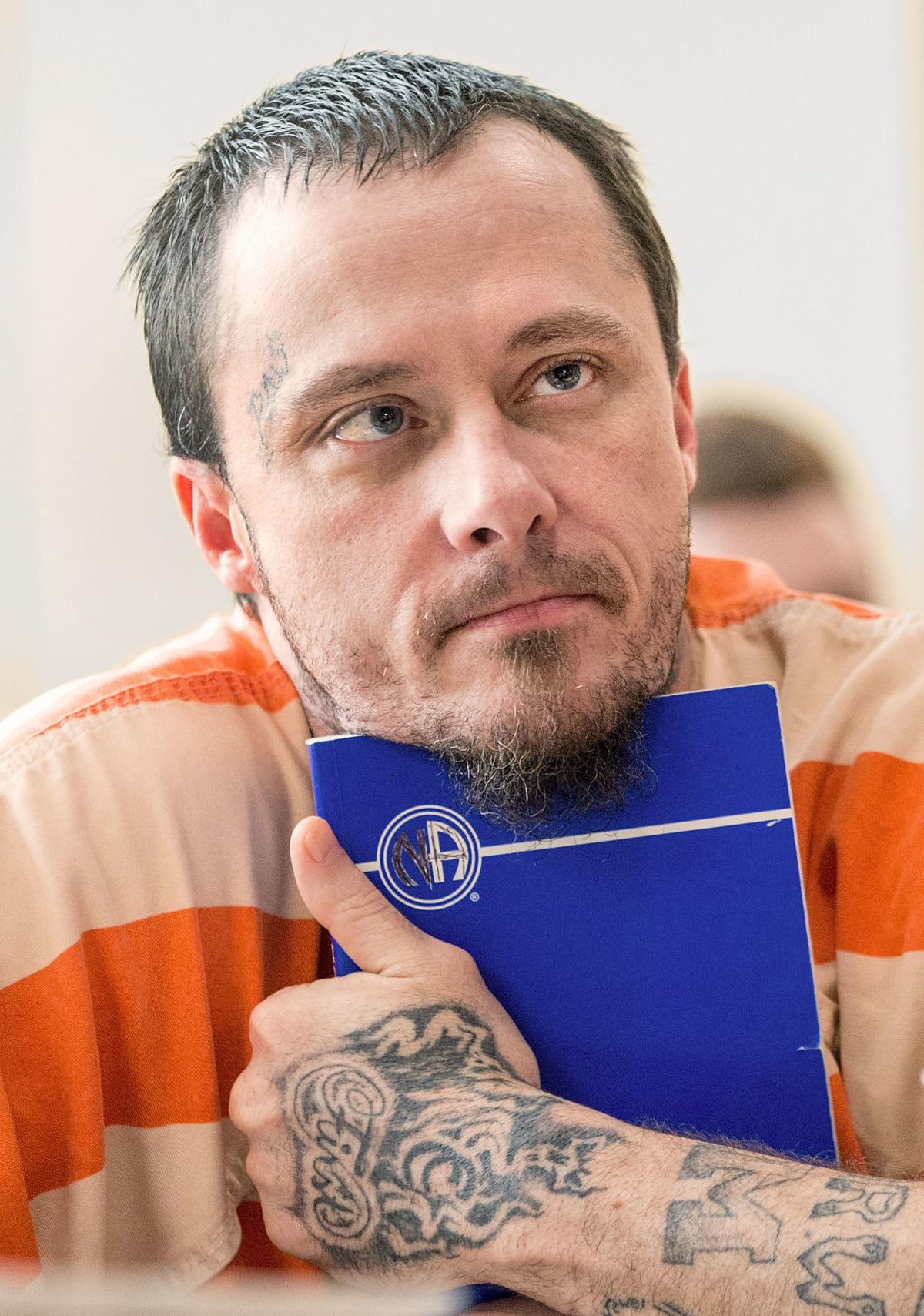 Joseph Wood, 40, of Winchester, leans on his workbook during a group counseling session. 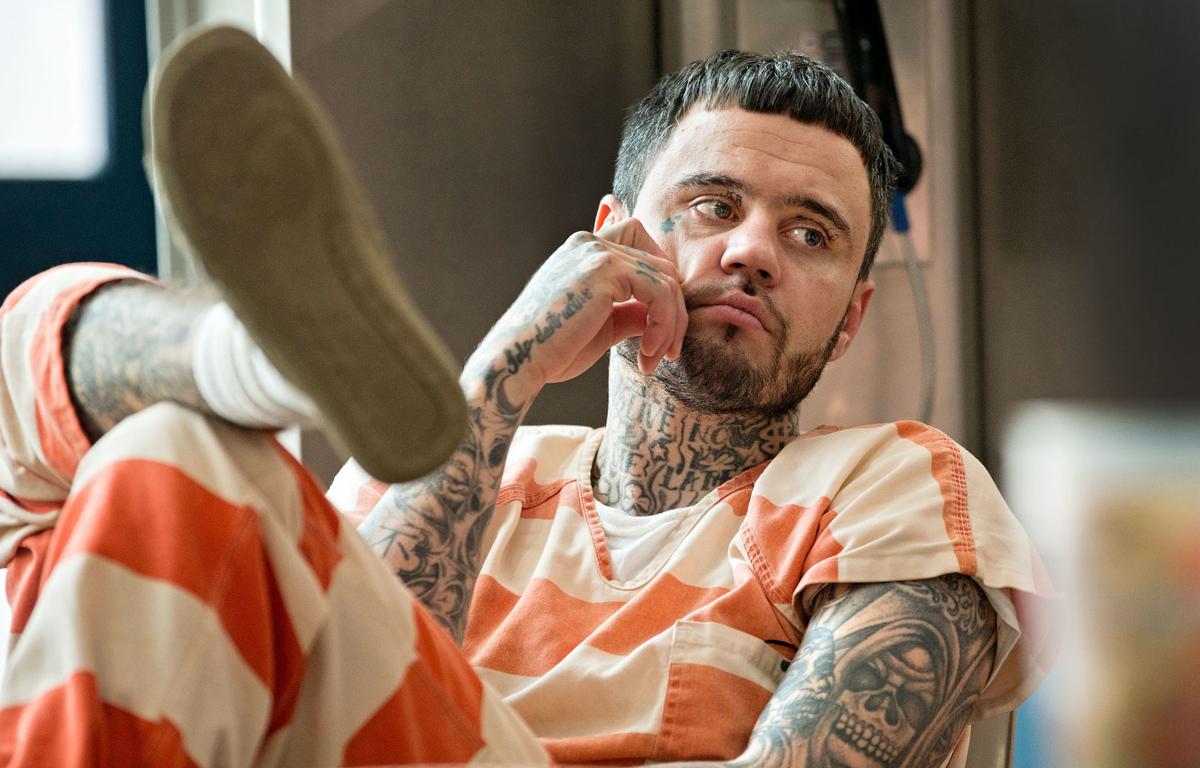 Christopher Ronquest, director of the McShin Peer to Peer counseling program at Rappahannock-Shenandoah-Warren Regional  Jail, speaks to inmates during a recent counseling session.

Christopher Kerns, 30, of Woodstock listens during a peer-to-peer session.

Dakota Reedy, 25, of Harrisonburg, grins during a light moment of the session.

Pharris Horne, 48, of Strasburg, listens as Christopher Ronquest shuffles cards during his presentation.

Jeremy Miller, 41, of Strasburg, sits in on the group meeting.

Joseph Wood, 40, of Winchester, leans on his workbook during a group counseling session.

Kerns, 30, of Woodstock, has been attending McShin Foundation Peer to Peer support groups for about three months with other inmates of Pod B at the Rappahannock-Shenandoah-Warren Regional Jail.

“Yes, I have hope. When I say hope, I am extending it beyond the next meeting. ...I was ignorant that I could choose to live differently; it was not something I was exposed to,” he replied when asked if the program is helping him.

Kerns, who is in the regional jail on a probation violation, said his path in life has led him in and out of jails and courts on various drug or drug-driven crimes. The RSW program, he said, was his first opportunity to be exposed to a peer-to-peer recovery group.

It was not a normal experience for him, he said, to hear a group of guys tell their stories, share their feelings and talk about empathy.

When he leaves jail, Kerns will use a $9,800 scholarship he has received to enter the McShin Foundation full-service recovery center in Richmond.

Due to a grant, the McShin Foundation is able to give away 20-such scholarships every year for three years. It covers housing, groceries, substance abuse counseling, peer recovery coaching, psychiatric evaluation and access to other resources. Participants who are successful also receive a 16-hour NAADAC (The Association for Addiction Professionals) certification as a peer recovery coach.

Kenya Mccutcheon, another inmate in the support group, is new to the RSW jail, arriving a few days ago. He was arrested by Rockingham County authorities on several charges including a drug charge and fraud and larceny charges. He said he does not want to end up being transferred to another facility.

“I am trying to stay here. I know I need rehab,” Mccutcheon said.

The peer-to-peer program is being funded with grant money. Christopher Ronquest, director of the Virginia Recovery/ Reentry Project for the McShin Foundation, leads the group.

“We gonna recover today,” he shouts as the men enter the common area from their cells.

Then Ronquest shares his story. He is brutally honest with the men. Honesty, he said, works to reach them; they are where he was.

“I had been using for some time. They called me a career criminal. A career is what you do. A career is a path you choose. I felt like a failure,” Ronquest said.

He told the group that he was a straight-A student when at the age of 14 he started using drugs and drinking. Ronquest said he was at times homeless, panhandling on the streets and so desperate he would do anything for the next hit.

He discussed the jails and prisons he had been in and out of.

“I wondered why I couldn’t get myself right,” Ronquest said.

He asked the men how many of them had been in lockup more than once. About 80 percent of the group of 55 men raised their hand.

Ronquest talked about sitting in the Pamunkey Regional Jail in Hanover, feeling defeated and beaten down. Then a man came into the jail to talk to them.

“I hung on every word he said,” Ronquest recalled.

The man was John Shinholser, president and founder of the McShin Foundation, who returned often to the jail.

“I liked what I was hearing," Ronquist said. "I started to realize recovery is a real thing.”

“I cannot beat my disease by myself. Dope will win every time if I fight it on my own,” Ronquest said.

Ronquest told the men about coming to the realization that the decisions he was making weren’t working and he might as well listen to Shinholser and others in sustained recovery.

“Has your will ever worked in your favor?” Ronquest asked.

He also asked the men how many wanted something different – about 95 percent of the men raised their hand.

For more than two years, Ronquest said he has not used illegal drugs or drank.

“Recovery has kept me out of jail, out of poverty and it allows me to walk in and out of the jails I once was incarcerated in,” he said.

He has a good job he is proud of, and a home. Ronquest said he has not only bought himself a nice car, he bought his mom an even nicer one.

At the end of the two-hour meeting, the men of Pod B stand up and applaud Ronquest. They gave Ronquest, whose nickname is Cricket, a hand-drawn Father's Day card with a cricket on the front. It read Happy Father's Day along with the word Recovery. The inside of the card was filled with signatures.

Ronquest said the McShin Foundation is grateful for the opportunity Jail Superintendent Russ Gilkison gave them.

Gilkison said the program came to be as a result of the jail board and the community wanting a more intensive program to help combat the drug trade, drug use and its associated crimes, something that cannot just be fought by arrests.

“I think it's going well. The inmates that have participated seem to be getting a benefit from it. We are getting people out of incarceration and into treatment. For those who remain here, while they are here they are getting that peer support,” Gilkison said.