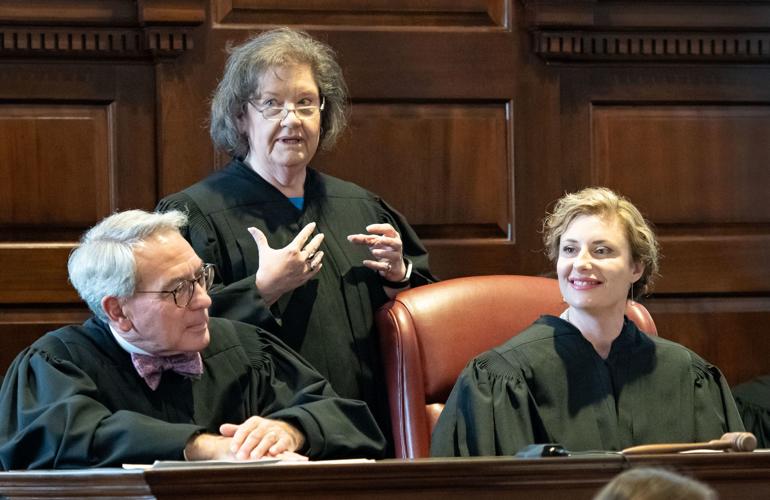 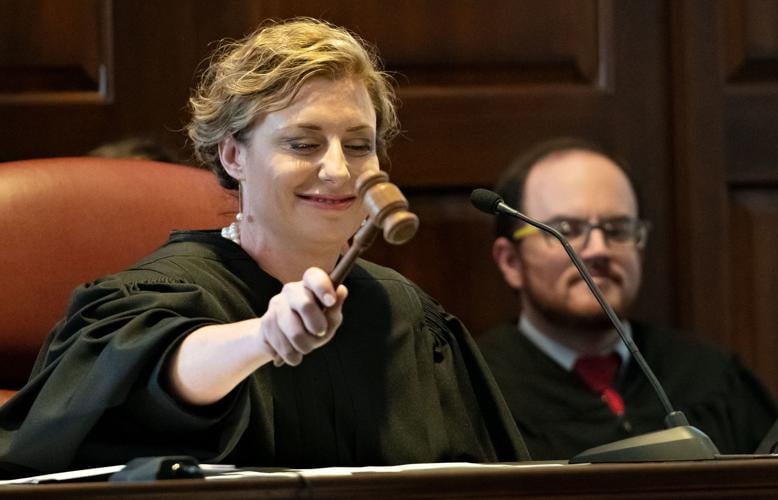 FRONT ROYAL – Nancie Williams, born to a Mexican father and American mother in Winchester, went into the Rockingham County Department of Social Services foster care system at age 6 with her sister.

After moving around from house to house, it was their aunt and uncle’s residence in Rappahannock County that they settled in when she was 14 years old.

The background of Williams was shared during her investiture as a 26th Judicial District Juvenile & Domestic Relations District Court judge on Friday afternoon in Warren County Circuit Court.

“I sit here before you as living proof that you can be a kid on food stamps, a kid who may move to a new home or family every summer break from school or a kid who constantly searches for their forever home and a family,” Williams said after acknowledging the social worker who helped her family and was in attendance for the ceremony. “But that does not have to be all that you are.”

Williams was sworn into her judge position by Warren County Circuit Court Judge William Sharp to take the vacancy soon to be created when current Warren County JDR Judge Daryl Funk fills a vacancy created by Sharp’s retirement on July 8. She will sit in the Warren County, Shenandoah County and Winchester Juvenile and Domestic Relations Courts.

Her appointment to the bench was voted on by the General Assembly during the 2022 session, among several other judgeship changes in the 26th Judicial District earlier this year after being nominated for it by the judicial district’s state delegation.

Covering the cities of Winchester and Harrisonburg and the counties of Frederick, Warren, Clarke, Shenandoah, Page and Rockingham, that delegation included House Speaker Todd Gilbert, R-Mount Jackson, and State Sen. Mark Obenshain, R-Harrisonburg, who Williams thanked despite their absence at the ceremony because of legislative work in Richmond.

“She truly brings something to this job that I’m not sure that anybody I’ve ever seen brings to this job in terms of her life experience,” Obenshain said to the courts of justice committee during her interview in March.

The idea to become a lawyer was not on Williams’ mind until a lawyer at the University of Virginia, which she attended after graduating from Rappahannock County High School in 1997, approached her with it.

She would go on to graduate from Howard University School of Law in 2005 and became an attorney in Alexandria, a prosecutor in Warren County, and eventually open her own family law and criminal defense practice while also serving on several boards and commissions and teaching classes.

“This is the greatest job you will ever have,” Burton said, adding Williams will have a unique opportunity to serve children and families.

Juvenile Domestic and Relations Judge Kimberly Athey pointed out that, with Williams’ swearing-in, men had previously outnumbered women at law firms, but women now outnumber men for juvenile and domestic relations court judges in the judicial district, four to three.

“I am not…a huge feminist, but I just had to make that observation,” Athey said.

Kimberly Esquire, Warren County bar association president, read a resolution on Williams’ investiture. Winchester Bar association member Martin Scheller shared that she helped his family after he had a newborn, and initially quipped at their first meeting, “You look like you’re 19 years old.”

Williams’ husband, Arnold, who was Warren County School Board chairman before stepping down in 2021, held the Bible on which she took her oath. A reception at a local restaurant followed the ceremony.

“Always be yourself, unless you can be a unicorn,” Williams said while giving words of encouragement. “Then be like me and my sister, be the unicorn.”