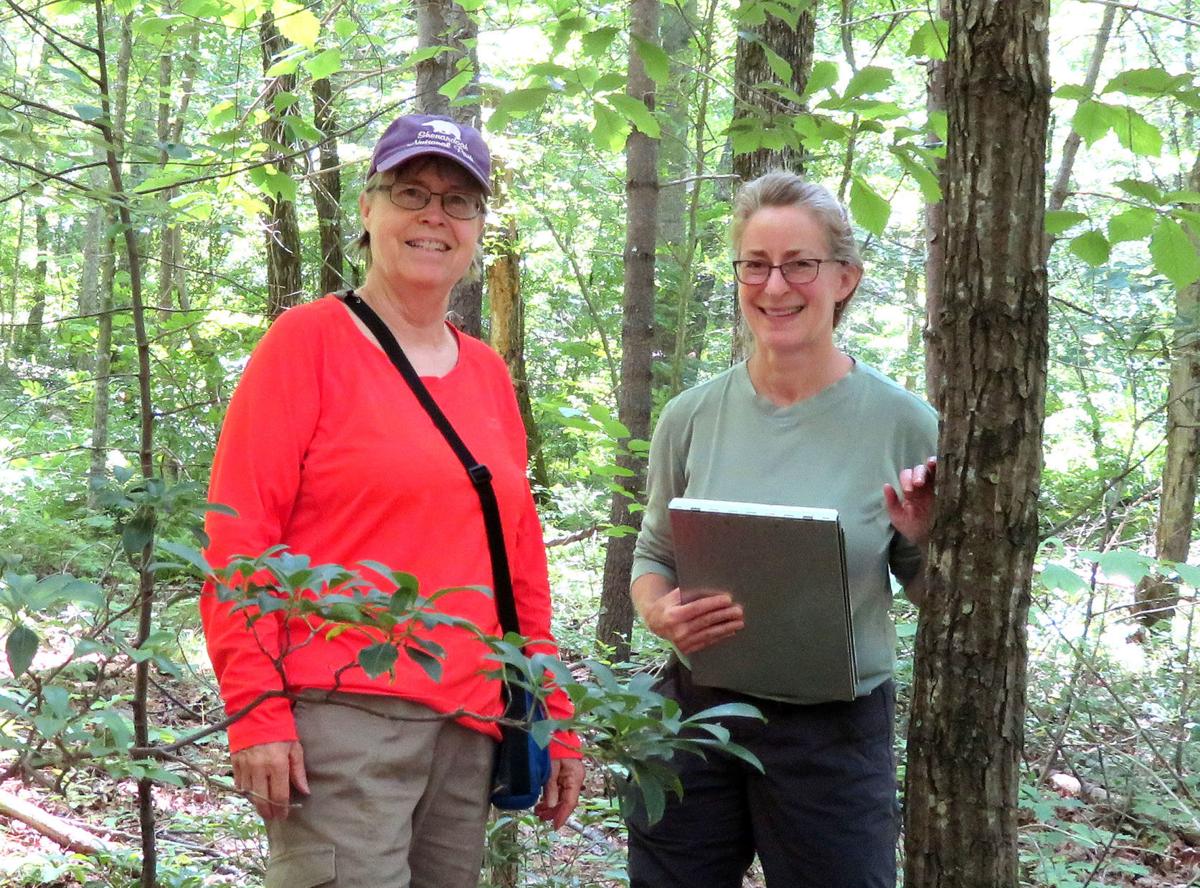 Patty Lane, left, of Rappahannock County, and Kate Heneberry, of Front Royal, pose for a photo during one of their orchid surveys. The two women recently found an endangered purple fringeless orchid south of Sperryville. 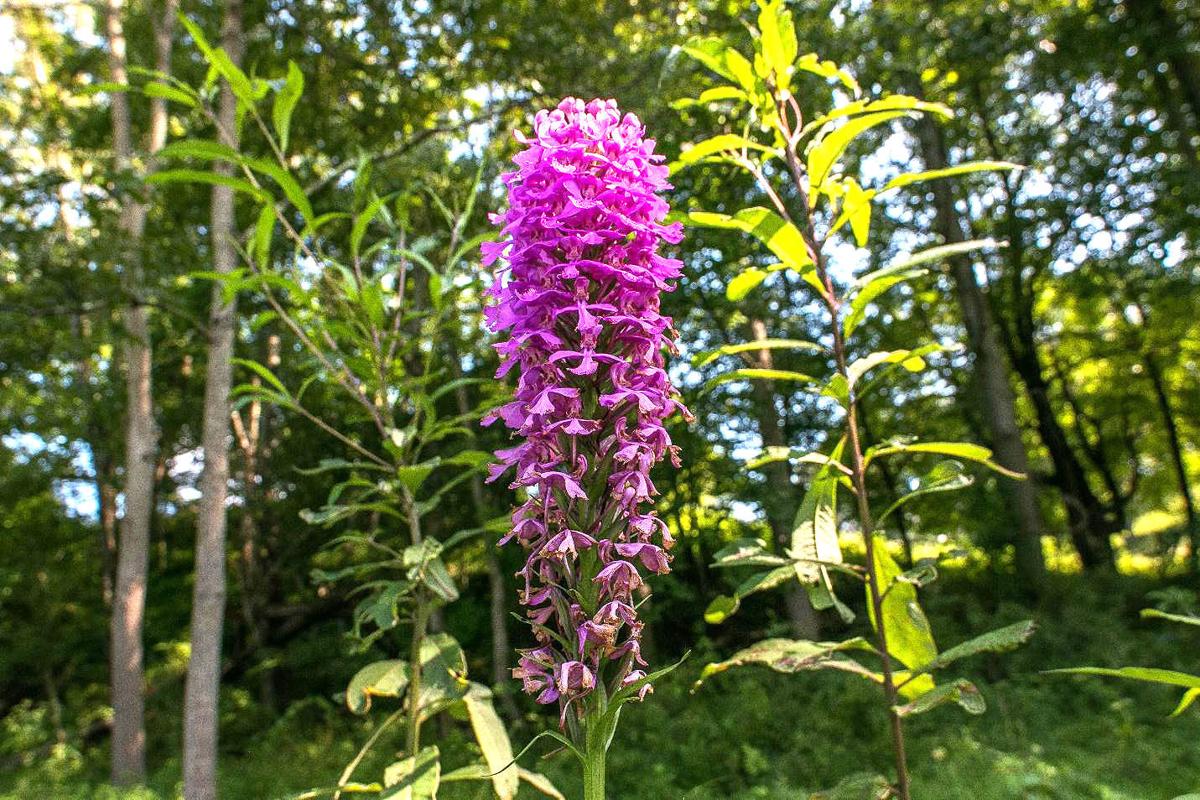 This endangered purple fringeless orchid was discovered by citizen scientists on a private farm in Sperryville last month.

Patty Lane, left, of Rappahannock County, and Kate Heneberry, of Front Royal, pose for a photo during one of their orchid surveys. The two women recently found an endangered purple fringeless orchid south of Sperryville.

This endangered purple fringeless orchid was discovered by citizen scientists on a private farm in Sperryville last month.

Finding an endangered orchid in Virginia is not a rare thing, said Smithsonian landscape ecologist Dr. Iara Lacher, who works in Front Royal.

Many orchids grow in wetlands, so they’re commonly found there, she said. What is a rare thing is finding wetlands in Virginia.

“Wetlands are declining all over the world. I mean it’s very, very significant,” she said.

The number of remaining wetlands in the commonwealth “is a shocking number,” she added. “It must be upwards of 90 percent of what we had in Virginia is gone.”

So when two area citizen scientists found an endangered purple fringeless orchid in a small area of wetlands near Sperryville this summer, it was a big deal.

The two women were conducting a routine orchid survey on a private farm just south of Sperryville when they discovered the rare orchid, according to an SCBI news release.

Heneberry said she spotted the orchid on their way out, after surveying for species in the area.

“It was outside of our survey plot, but we were also recording what we call incidentals,” she said. “I just saw this pinkish-purple flower, and it was growing in the middle of another flower that I knew called New York ironweed.”

Both were wrong, as it turned out to be a fringeless orchid.

The orchid wasn’t in the guidebook the women had received from the SCBI, with 15 or so orchids they could expect to see on their surveys, Heneberry recalled.

Returning home, she started doing some research online, emailing back and forth with Lane who was doing her own research

On a website called Go Orchids, she typed in “purple fringed orchids,” and the fringeless one came up as a suggestion.

“That’s it, that’s the one,” she recalled thinking.

She said the Flora of Virginia Project classifies the purple fringeless orchid as globally secure, but “critically imperiled” in Virginia.

The purple fringeless orchid, which can have pink or purple flowers, is native to the southeastern and mid-Atlantic region, but it’s nearly extinct in Virginia and is estimated to have fewer than 1,000 individual plants left in the state, the SCBI release states. The orchid relies on wetlands, which are declining around the several states where it normally grows.

Lane and Heneberry’s find was confirmed by experts at Shenandoah National Park, the release states.

Heneberry, who’s retired from the Northern Virginia Regional Park Authority, said she started volunteering with the SCBI about four years ago and has enjoyed learning more about the local plant life.

Though this was her first year doing orchid surveys for the SCBI program Virginia Working Landscapes, she said, “I’ve been an amateur naturalist for many years.”

After a career in administration, she said, “It’s been really fun to get back to the natural resource roots.”

The SCBI’s citizen scientists are part of a pilot study in collaboration with the North American Orchid Conservation Center, which includes scientists from the Smithsonian Environmental Research Center, the release states.

Lacher, head of the SCBI’s Changing Landscapes Initiative, leads the programs in exploring “the potential for orchid species diversity and abundance to serve as an indicator of forest health,” the release states.

Researchers will use the data they gather to extract tissue samples from plants and potentially manually increase orchid growth.

“The hope is that people will be able to sustain them even in their backyard,” Lacher said.

There are several reasons for the decline of wetlands and native orchids, she said. Cutting down of forests, filling in of wetlands and pollution all play a big role, as well as the increase of animal populations, such as deer.

“They eat everything,” she said.

This was the first rare orchid found in one of the citizen scientist surveys, said Joe Guthrie, field survey coordinator of the orchid project and the research coordinator for Virginia Working Landscapes.

“It’s a big moment for our new project and for our volunteers,” he states in the release.

But while the find is useful to the SCBI’s study, Lacher said it’s about more than just the preservation of wetland orchids.

The surveys and their results also help educate on the importance of wetlands to Virginia’s ecosystem, she said.

Since colonizing the area as far back as the 1600s, people have had the perception that wetlands weren’t useful for humans, she said.

“Now we’re learning that wetlands play a really crucial role,” she said. Not only do they provide a place for orchids to grow, they also provide a filtration system for rainwater on its way to area rivers and eventually the ocean.

“It’s better than any technology that we come up with,” Lacher said. “That’s necessary for our own health and well-being.”