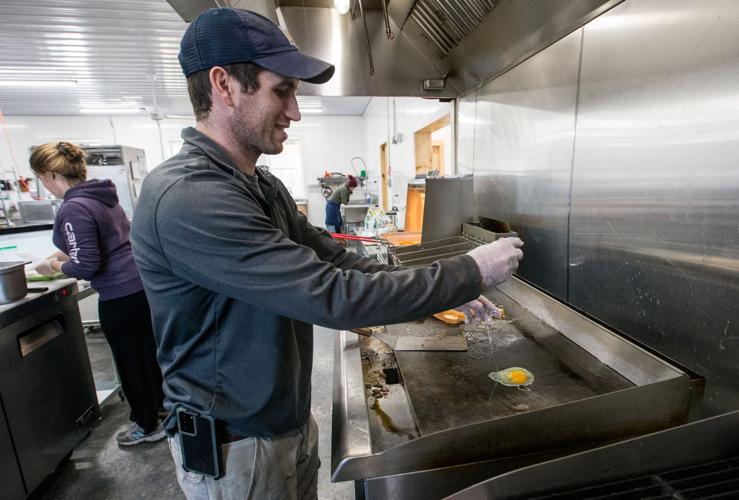 Joseph Ulmer, owner of Overlook Produce, Bakery and Deli, cracks an egg on the griddle. 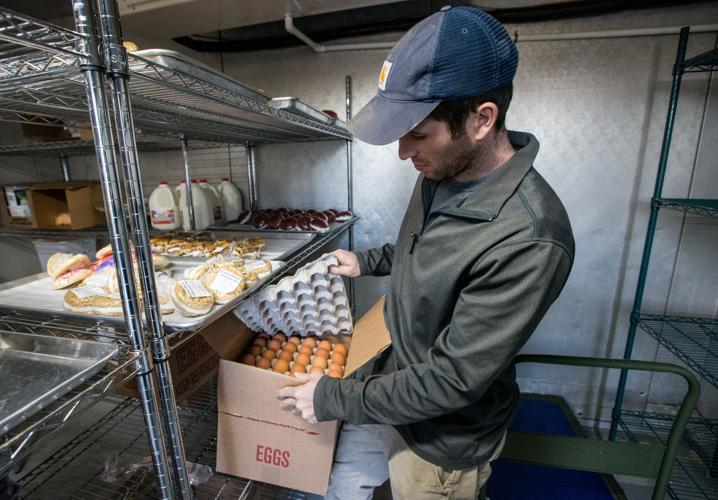 Joseph Ulner, owner of Overlook Produce, Bakery and Deli, checks on his supply of eggs in the walk-in cooler. Ulner said the price of eggs is rising locally.

Joseph Ulmer, owner of Overlook Produce, Bakery and Deli, cracks an egg on the griddle.

Joseph Ulner, owner of Overlook Produce, Bakery and Deli, checks on his supply of eggs in the walk-in cooler. Ulner said the price of eggs is rising locally.

The effects of a nationwide egg shortage due to the Avian flu have been felt in Harrisonburg and the surrounding areas.

According to NBC News, the worst outbreak of avian influenza on record is threatening to stretch into a second year, as the country tries to contain a virus that has already caused some food prices to soar amid a shortage of eggs.

Nearly 58 million birds from commercial and backyard flocks have been wiped out in the U.S. since last February, according to the U.S. Department of Agriculture’s Animal and Plant Health Inspection Service.

The price of eggs has tripled in some cases in regular grocery stores. The shortage has meant that consumers are turning to local sources for their eggs.

Joseph Ulner, the owner of Overlook Produce Market and Deli in Mount Crawford, said that they are doing their best to keep local eggs stocked through the various farming partners that they have, but it is sporadic.

“People are coming in and buying way more,” Ulner said of when the market gets a shipment of eggs.

Overlook has been able to get eggs from Pennsylvania to keep the bakery going during this egg shortage.

Overlook has also been able to keep their price of eggs fairly reasonable given the circumstances. A carton of eggs might have cost $3.50 prior to the shortage and now costs $5.

“Local markets are getting drained because of price of eggs commercially,” Ulner said.

It all comes down to when the avian flu will be contained and egg production can continue normally. Rockingham County has seen its first case of avian flu, although there hasn’t been an outbreak of it since 2002, Ulner said.

The Virginia Department of Agriculture and Consumer Sciences has confirmed the state’s first positive case of highly positive avian influenza in a flock of commercial turkeys in Rockingham County.

According to VDACS, samples from the flock tested positive at the state’s regional animal health laboratory in Harrisonburg. Samples were also sent to the U.S. Department of Agriculture’s Animal and Plant Health Inspection Service National Veterinary Services Laboratories in Ames, Iowa for further confirmation.

VDACS said it is working closely with the Virginia Poultry Federation and the USDA on a joint incident response. State officials quarantined the affected premises and are performing additional surveillance and testing within a 10-kilometer radius around the affected flock.

The 25,000 birds on the affected property were killed to prevent the spread of the disease, according to VDOCS. Birds from the flock won’t enter the food system.

“Poultry is the Commonwealth’s top agricultural commodity and protecting this industry remains our top priority,” VDACS Commissioner Joe Guthrie said in a statement. “We will continue to work with the Virginia Poultry Federation, and other industry partners, to ensure strict biosecurity protocols are in place for Virginia poultry producers and poultry products that are shipped in and out of the state.”