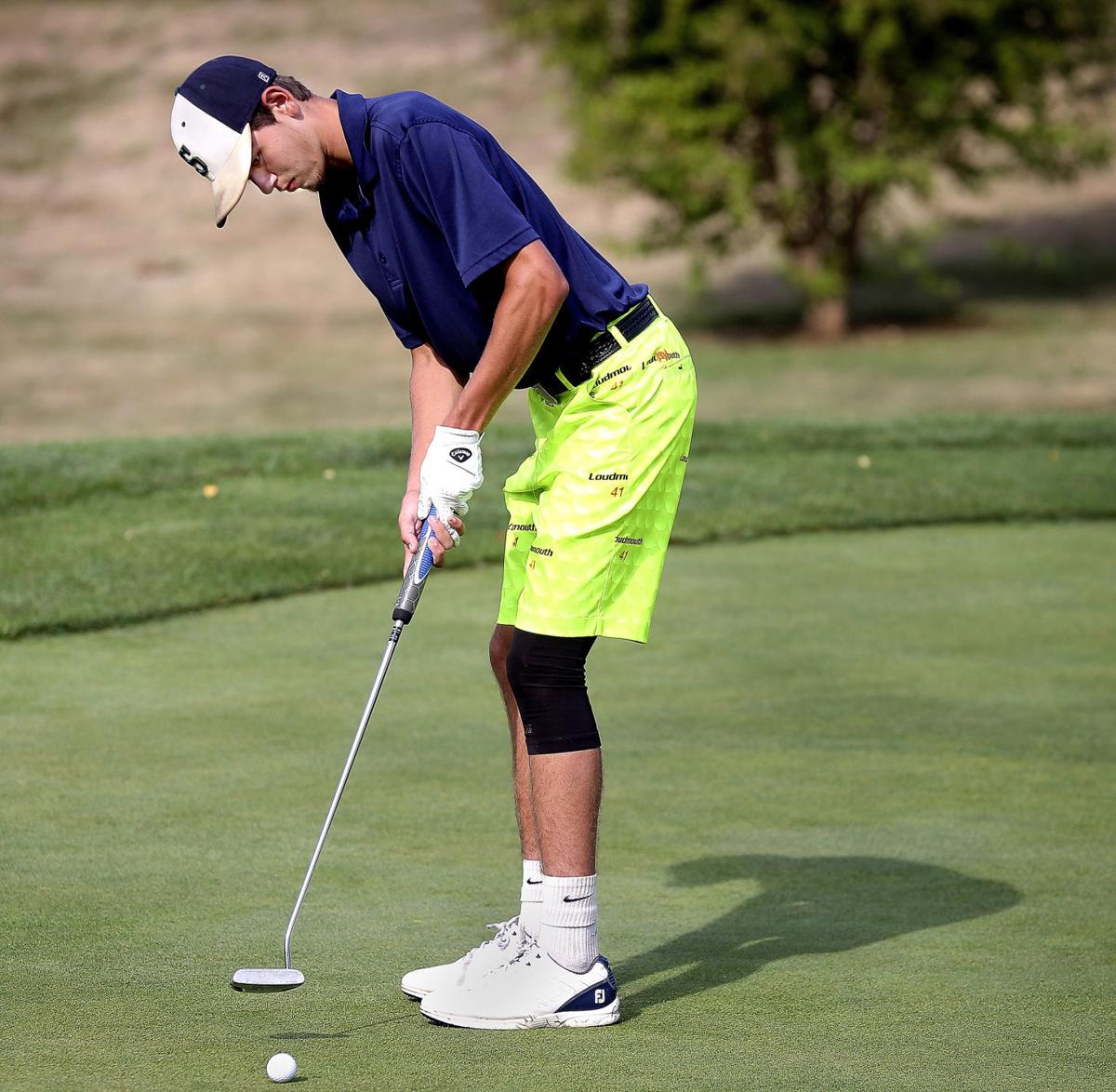 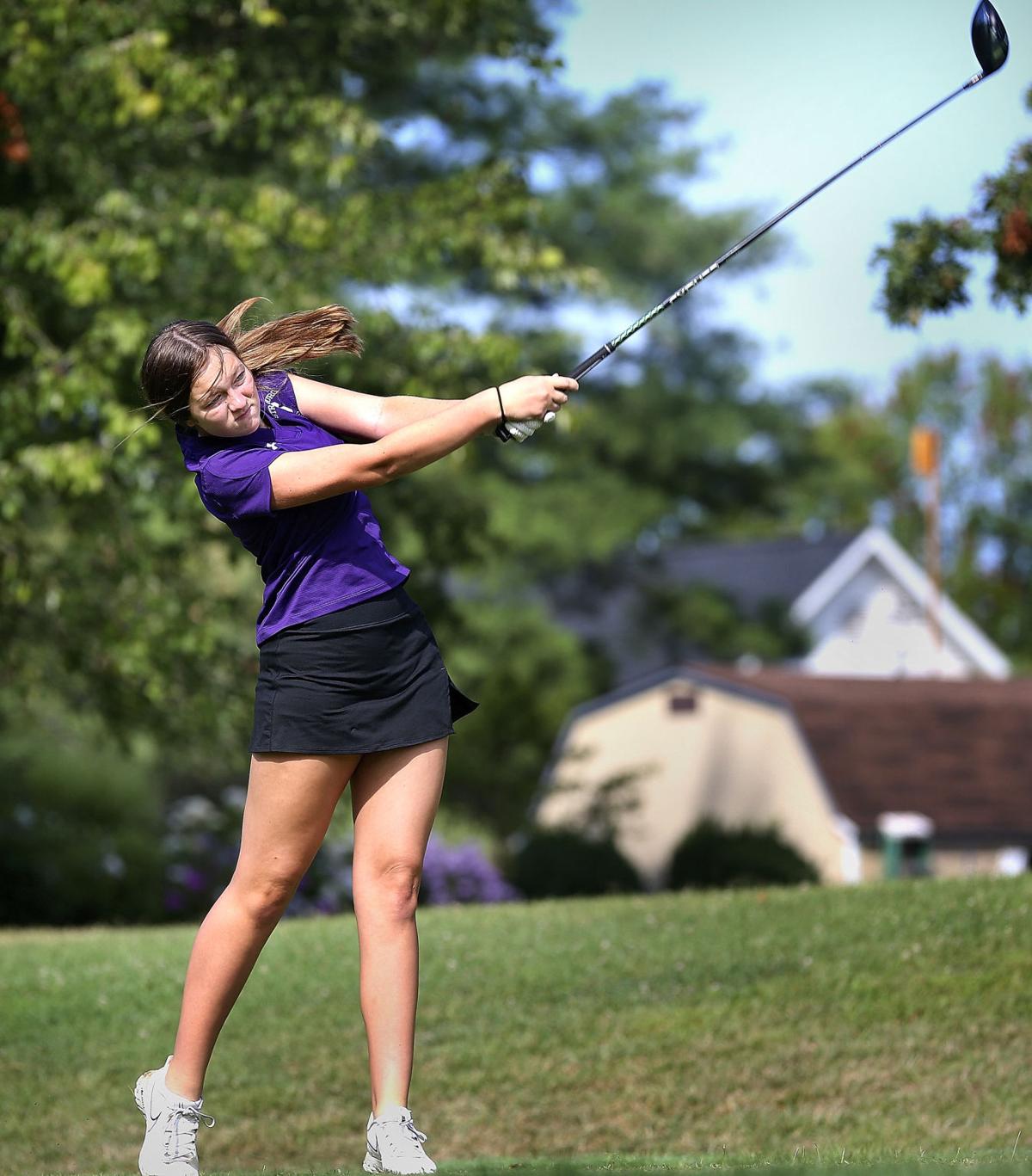 Tinleigh Rusher of Strasburg High School tees off on Blue Course No. 9 during the Curly Licklider Invitational on Wednesday at Shenandoah Valley Golf Club in Front Royal. 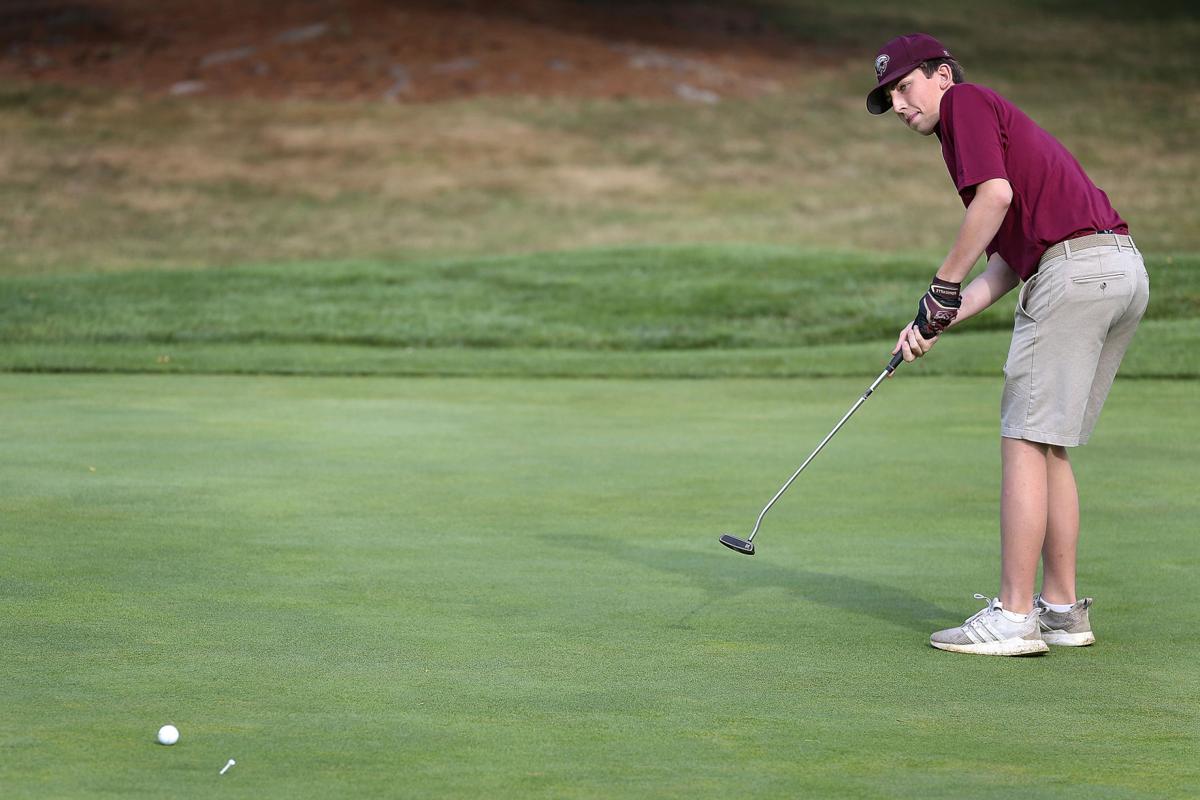 Landon Pond of Warren County High School watches his putt roll on White Course No. 1 during the Curly Licklider Invitational on Wednesday at Shenandoah Valley Golf Club in Front Royal.

Tinleigh Rusher of Strasburg High School tees off on Blue Course No. 9 during the Curly Licklider Invitational on Wednesday at Shenandoah Valley Golf Club in Front Royal.

Landon Pond of Warren County High School watches his putt roll on White Course No. 1 during the Curly Licklider Invitational on Wednesday at Shenandoah Valley Golf Club in Front Royal.

FRONT ROYAL — Area golfers were afforded an opportunity on Wednesday that they didn’t get during last spring’s condensed regular season: the chance to compete in a large tournament. The collective first impression of the four local teams who made their 2021 fall season debut in the 29-team Curly Licklider Memorial Golf Tournament at Shenandoah Valley Golf Club was that the opener went just OK.

Central’s Will Gochenour and Strasburg’s Luke Mason each shot a 90 to pace local golfers who took part in the event, each well off the pace of Stone Bridge’s Will Layton’s winning score of 67 strokes, while none of the four local teams placed inside the top 20 in a field loaded with teams from various Virginia High School League classifications.

Skyline placed highest among the local squads, firing a six-golfer total of 595 to land in 21st place, while Central (641) was 23rd and Warren County (683), the host of the tournament, placed last among the 25 teams that fielded full lineups. Strasburg had just three golfers in the tournament and didn’t qualify for team scoring.

“It went about as expected,” Central coach Dustin Thomas said of his team’s round, which featured just two golfers — Gochenour and fellow junior Ethan Hoover (98) who shot below the 100-stroke threshold. “Our two returners played good rounds, the rest of the kids are new to this, a little intimidated walking around the turn here and seeing the putting green and seeing 100 kids.

Gochenour, the Falcons’ No. 1 golfer, led the team on Wednesday as Thomas expects him to this season but wasn’t thrilled about his debut. The junior said he went into the opener focused on just playing the course.

The Nos. 1 and 2 golfers for each team played the Red and Blue nines, Nos. 3 and 4 played Blue and White and Nos. 5 and 6 played White and Red.

“I didn’t think about anyone else, just tried to play the course. It could’ve been better. It was alright. I had some crummy drives,” Gochenour said. “Everything else was fine — putting was great, chipping was great — but the driving was the bad part.”

Mason, playing as Strasburg’s No. 1, had a similar critique of his first round of the new season, saying that he “just didn’t hit the ball very well.”

“Around the greens I was pretty good. Off the tee, not really,” the senior said.

“It’s been a while,” Mason added of playing in a large tournament, “It didn’t really go good for me but the people I played with, they were good. It was great to get back out and start playing again.”

While Skyline’s No. 1, Blake Sibert, had a “bad back nine” according to head coach Monty Goff and ended the day with a 108, the Hawks’ worst score, the team got a nice surprise out of the No. 6 slot from freshman Cole Logan. Playing in his first competitive tournament, Logan shot a 91 to lead Skyline.

“I watched him play about three holes today and he hit the ball pretty solid, putted well, but I noticed something in his swing that I’ll be able to start working (on),” Goff said. “He’s got a little fade that I need to work on, but he hits the ball pretty solid. … He’s gonna be good.”

Twins Cameron and Cayden Morris shot matching 96s, while Alex Guerico and Reese Sperry each shot a 102 to round out the Hawks’ scoring.

“I think they played OK. I mean, I think they’re gonna be sneaky as we get into the year but relatively all the scores were around 100. That’s fine,” Goff said.

“We’ll be able to start spending range time now to where I can actually start working with them, and I expect them to actually do pretty well,” he added. “I’m impressed. It could’ve been a whole lot worse for the first time out.”

In addition to Gochenour and Hoover, Central’s Gavin Krasley shot a 107, Luke Williams shot a 109, Nathan Eye shot a 117 and Clayton Sherman a 120. Thomas said he was particularly impressed with Hoover, who trimmed 35 strokes off his final performance from last season, when he shot a 133 at the Region 3B Championships on the same course in April.

“To go ahead and improve that many strokes in that period of time, I think that’s just great to show how much work he’s put in for himself,” Thomas said. “I’m proud of him, for sure, today.”

Joining Mason on the course for Strasburg was Tinleigh Rusher and Kendal Sine, who shot a 98 and 100, respectively. Rams head coach Joel Morgan said that while Mason had some good holes, he also had some not-so-good ones that were “bad enough” to land the junior with a 90.

Morgan added that Sine played “fairly well” over the back nine after a poor start, and that he expects Rusher to drop her nine-hole average below the 49 she posted on Wednesday as the season progresses.

“We’ve got a lot of youth and they’re really excited to play, they just don’t know what’s going on yet,” Lay said. “We’re just gonna slowly work our way up to that. We’re just gonna have some fun for these first couple weeks and eventually just keep cracking down the strokes, just knocking them off and eventually getting to where we want to be.”