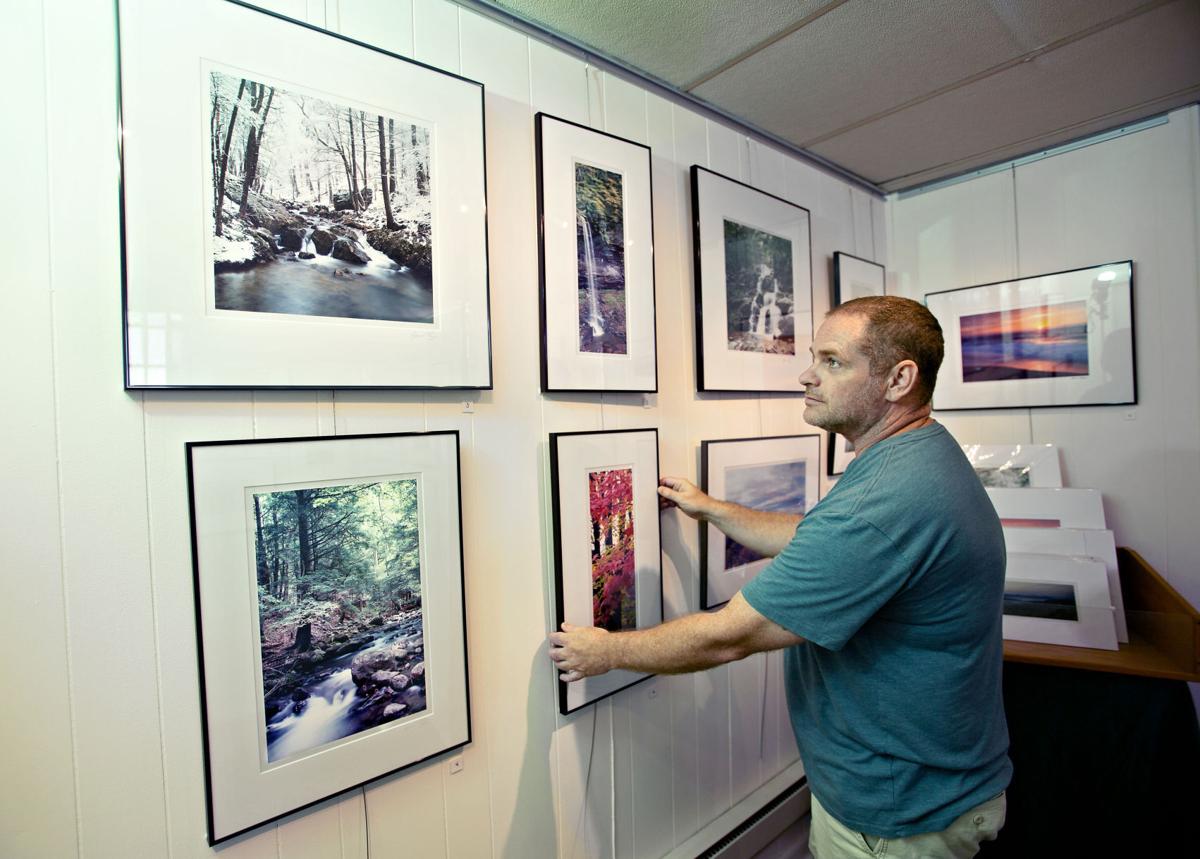 Andrew Thayer mounts a display of his scenic prints inside his studio on West Court Street in Woodstock. 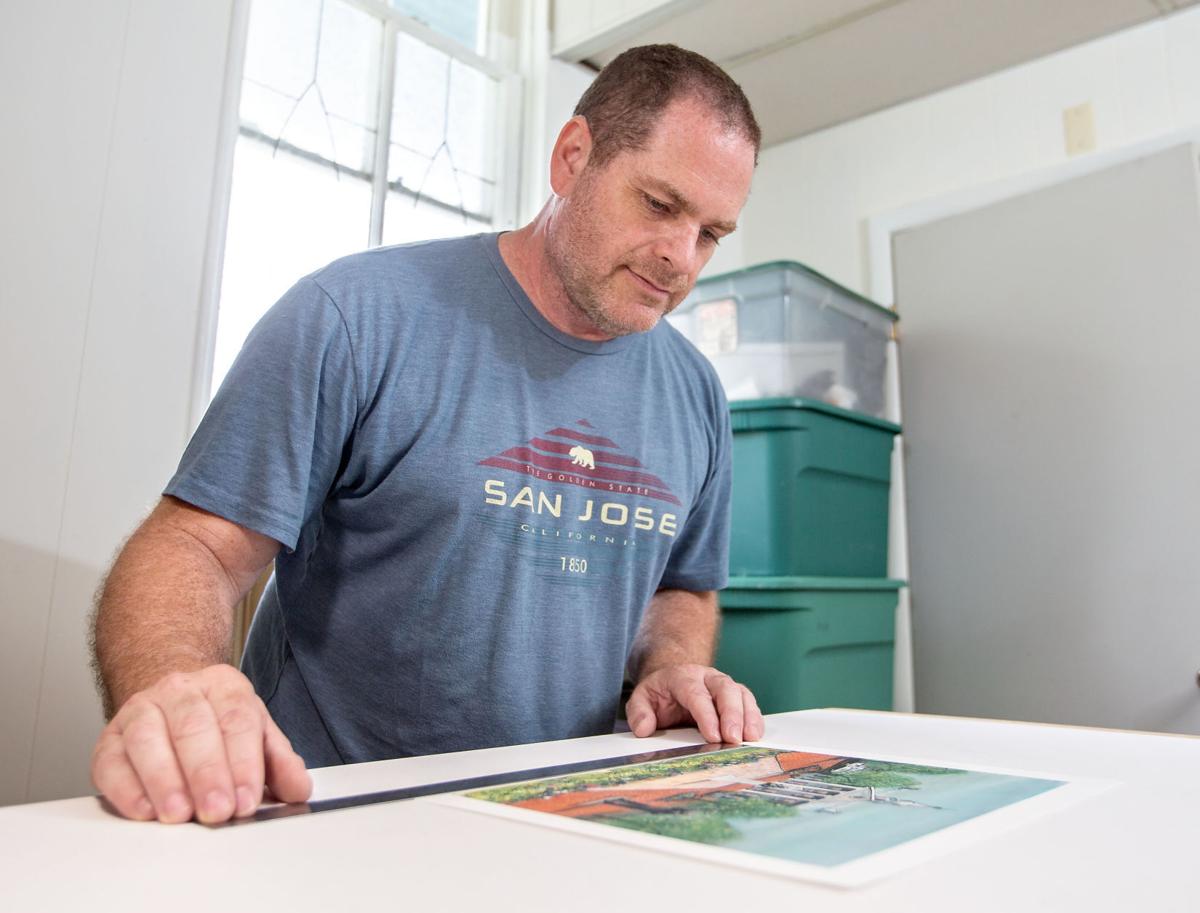 Thayer measures a P. Buckley Moss print for framing inside his studio. Thayer frames his own artwork and also serves as a frame shop for the public. 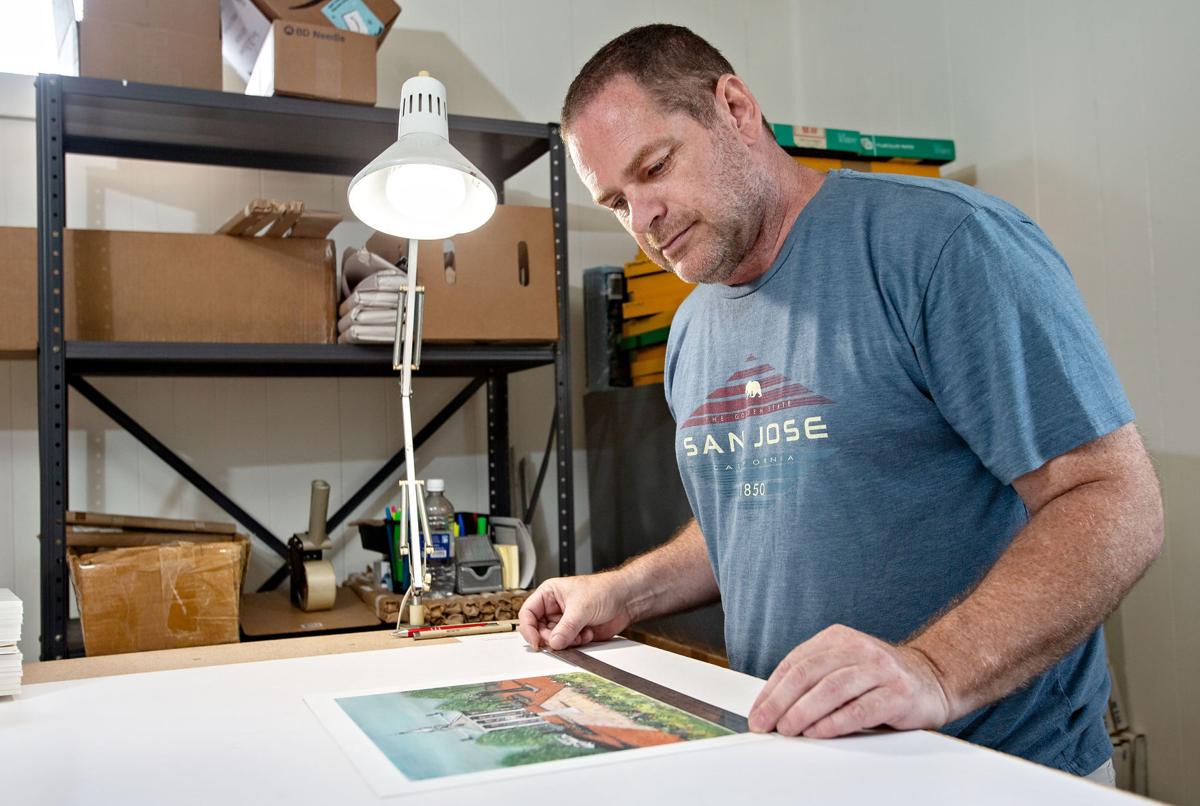 Thayer measures a P. Buckley Moss print for framing inside his studio. Thayer frames his own artwork and also frames artwork for the public.

Andrew Thayer mounts a display of his scenic prints inside his studio on West Court Street in Woodstock.

Thayer measures a P. Buckley Moss print for framing inside his studio. Thayer frames his own artwork and also serves as a frame shop for the public.

Thayer measures a P. Buckley Moss print for framing inside his studio. Thayer frames his own artwork and also frames artwork for the public.

WOODSTOCK — For more than two decades, local photographer Andrew Thayer has been capturing scenes throughout the Shenandoah Valley. Now, his photographs have a place to call home.

Thayer, who owns and operates Andrew Thayer Photography, recently opened his own studio and gallery at 301 W. Court St. in Woodstock.

The space became available after Gene Taylor, who had a photography and frame shop called Studio Shenandoah for over 30 years in the same building, retired last year. Thayer is now renting the space after having worked there for Taylor in the early 1990s.

“I’ve been a photographer for over 20 years, working out of my home, doing art shows, selling photographs, doing commission work. Having a gallery was something I’d always thought about, but I never really looked into getting a space until now,” Thayer said. “To me, it was a sentimental transition from working with Gene and his photography. Continuing that tradition of art and photography in that space was something that appealed to me — it had a sentimental value.”

The space includes an exhibit of Thayer’s own photography, which is mostly scenes from around the valley. Thayer’s gallery will also provide custom art framing. Additionally, he will continue to provide on-location portrait sessions outdoors as well as wedding services and commission work for clients.

Thayer got into photography as a teenager at Stonewall Jackson High School, where he worked with the school yearbook. His two brothers were also into photography, which helped spark his interest. He later continued pursuing the art form in college then went to work for Taylor in the early 1990s as well as the Northern Virginia Daily until about 2012, where current photographer Rich Cooley served as his boss.

“I enjoyed working for the paper. During those years, I photographed everything from portraits, sports and even some wildlife — a little bit of everything,” Thayer said. “That was a fun experience for me.”

Throughout his tenure, there’s been one constant that has inspired Thayer’s photography— the beauty of the valley.

“The Shenandoah Valley is a beautiful place to live. Anyone who’s been here for any amount of time can see it on a daily basis. My photographs represent just a small fraction of that beauty,” he said. “When the light and color is just right in the valley, I will get into the car and go for a drive — either up on top of a mountain, or on a back road or along a river road — and hope to see something beautiful. Usually I’m always rewarded with a beautiful scene in the valley.”

Thayer said his favorite season to shoot is the fall, followed by the spring.

“We have a lot of great colors that the trees provide during those seasons and the spring flowers come out in the spring,” he said. “Around any corner on any road here, you’re bound to see a beautiful scene.”

As for advice for young photographers, Thayer said keeping an open mind while finding happiness in your work is key.

“Always be open to many types of photography. You want to be versatile in what you do and where you can go as a photographer,” he said. “Photograph what interests you, and see what works for you and what you enjoy the most and go out and photograph those scenes. Photograph it all, and pick out those scenes that you like.”

There are currently no set hours at Thayer’s downtown gallery, but interested customers can contact him via email at athayer@shentel.net or by phone at 540-465-1440.

Thayer’s photographs, along with various other artists from several art backgrounds, will be featured during the Shenandoah Valley Arts Festival in downtown Woodstock from noon to 8 p.m. Saturday.