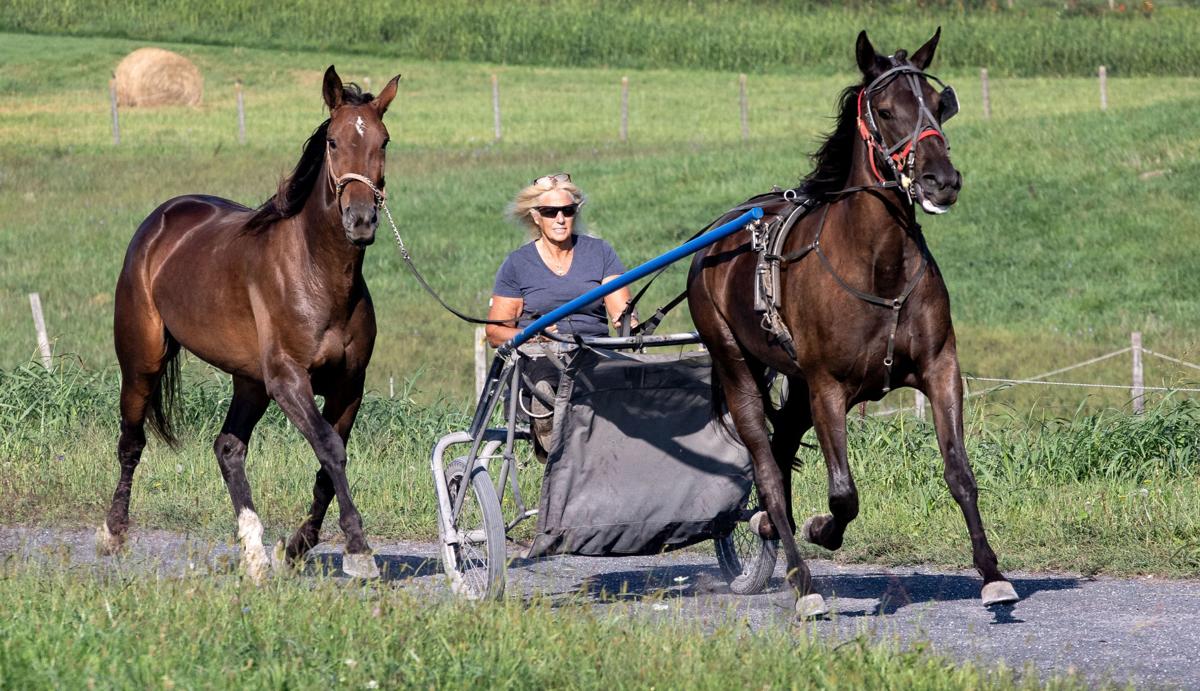 Betsy Brown, of Woodstock, takes her horses Believe in Him, left, and Ellen’s Wish, right, on a training run Wednesday morning at the Kibler track west of Woodstock. Brown plans to have both trotters participate in racing Saturday at Shenandoah Downs Racetrack, which opens its fall season today. 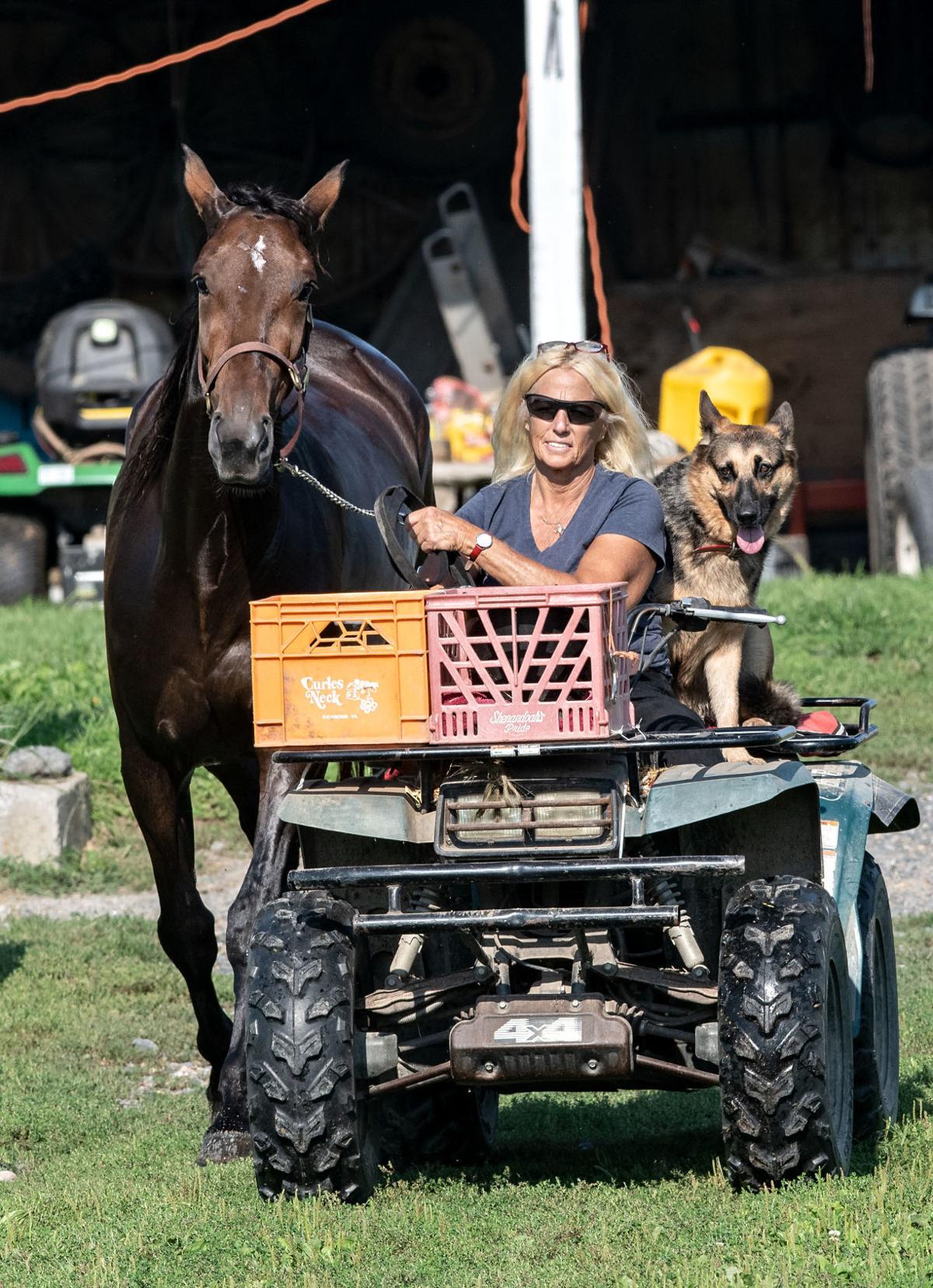 Brown takes her horse Believe in Him out to the pasture after finishing a training run with the help of her dog, Claire, on an ATV. 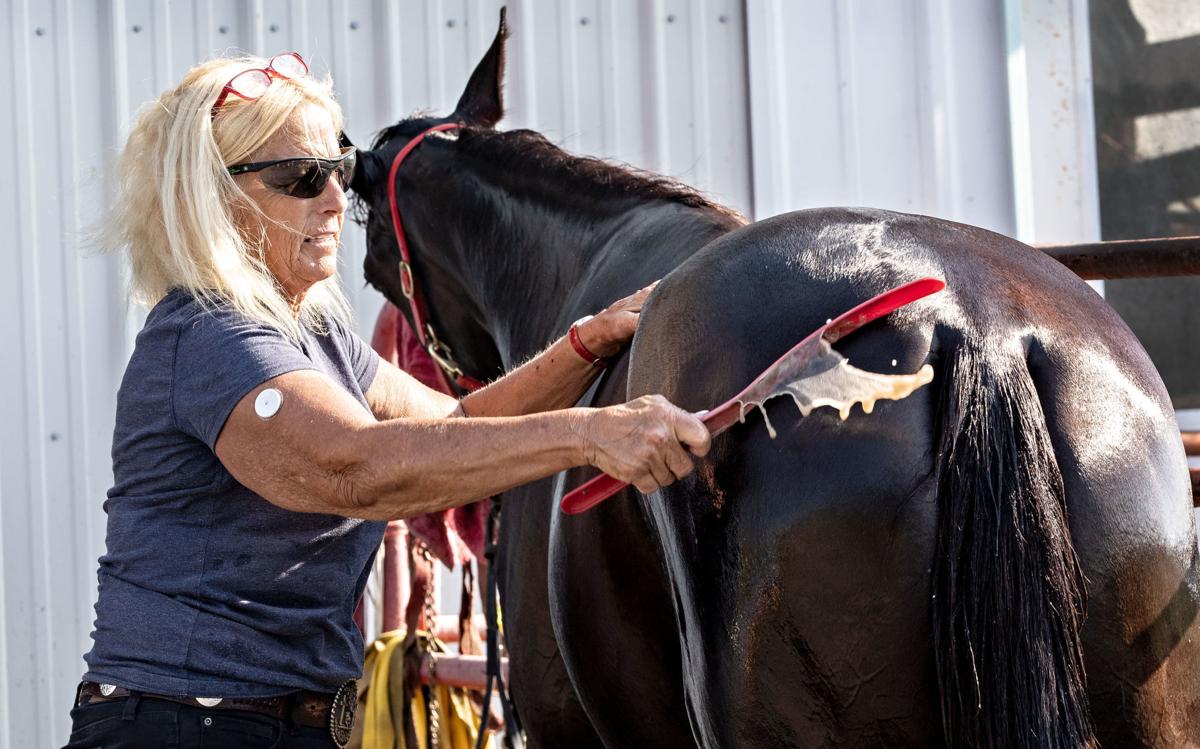 Brown and her horses round the track during the morning workout.

Betsy Brown, of Woodstock, takes her horses Believe in Him, left, and Ellen’s Wish, right, on a training run Wednesday morning at the Kibler track west of Woodstock. Brown plans to have both trotters participate in racing Saturday at Shenandoah Downs Racetrack, which opens its fall season today.

Brown takes her horse Believe in Him out to the pasture after finishing a training run with the help of her dog, Claire, on an ATV.

Brown and her horses round the track during the morning workout.

On Saturday at Shenandoah Downs, Woodstock resident and longtime harness trainer, driver and owner Betsy Brown will receive recognition in a winners circle presentation for her career-high win last year.

Last fall in Woodstock, Brown recorded her 500th driving win in front of an empty grandstand, but on Saturday a hometown crowd will get to celebrate her success.

Even when she came close, it was “that elusive last one,” she said. “But it finally happened.”

Shenandoah Downs opens its sixth season of pari-mutuel harness racing today and continues its five-week "Harness The Mountain Magic" meet at the Shenandoah County Fairgrounds in Woodstock through Oct. 16.

Following the 2020 season, which proceeded without fans in attendance or wagering because of the pandemic, “both fans and wagering will return to the Shenandoah County Fairgrounds as will a healthy purse increase that awaits participating horsemen,” a Shenandoah Downs news release explains.

Brown will receive a proclamation from the Virginia House of Delegates after the second Saturday race.

Though she doesn’t drive much anymore, Brown, 62, said she spends a lot of time training horses to race.

“It’s so important to give them a good start,” she said.

Drivers might be inclined to push young horses to the front of the line right out of the gate, she said, but she likes to take it slow, racing them at the back to give them the right amount of experience and endurance.

Brown learned to race from her father in 1979, and started by driving in fairs and getting her license in 1980 to drive anywhere.

Her father died in 1985, but Brown kept up with it, moving from the Rochester, New York, area to Woodstock and built a farm with her partner, Terry Kibler.

About three years ago, Kibler died, leaving Brown to continue her work at Kibler Farm. But around that time, she started training Kibler’s cousin, Morgan Marston, of Edinburg, who started coming to the farm about 10 years ago when she was 3.

“She’s actually a partner with me and my brother on horse racing,” Brown said.

Last year’s win was bittersweet, Brown said, not only because of the crowd-less grandstand but also because her father couldn’t be there to see it.

“It was really nice; I regret I wasn’t able to get it earlier when my dad was alive,” she said. “He would have been just beaming.”

But it was also fitting that she won when she did because of the young horse that shared in her success.

The 7-year-old mare named Believe in Him came to Brown as an injured filly. Her owners gave her to Brown and Kibler, who saw she was well-bred and worthy of special attention and care.

“She came on and she’s my best horse now,” Brown said.

Though she credits other women drivers like Bea Farber with paving the way for her career and ultimately her 500th win, Brown said she’s excited and honored to join a relatively small group of women in a sport traditionally occupied by men.

“It feels really good,” she said of her upcoming recognition. “It was a long time coming.”

Today’s "Happy Hour" cards will begin at 3:30 p.m., and fans can enjoy $2 draft beers and $1 hot dogs. Saturday programs will begin at 1 p.m. and feature a different promotion each week. This Saturday, the first 600 fans will receive a free commemorative T-shirt, a tradition fans have come to expect.

That day, the Virginia Harness Horse Association will offer its popular "Own a Horse for a Day" promotion. Eight fans who were selected during the recent Shenandoah County Fair meet will each "own" a horse in a $5,250 race. They will spend time with their respective horse, driver and trainer in the paddock before the race and win the amount of purse money their horse earns in the race.

One lucky "owner" will walk away with $2,625. Another round of "owners" will be drawn at random after the seventh race. That new group will return next weekend.

Two fans will win a harness enthusiast VIP dream packages, and both will return to the races on Sept. 24 for dinner, a $20 betting voucher, a ride in the starter's car, a race named in their honor complete with a winner's circle presentation and souvenir picture, and they will each announce a harness race that day and compete in a double-seater sulky race.

Parking and admission to races at Shenandoah Downs are free and family-friendly. Wagering is available at every race.