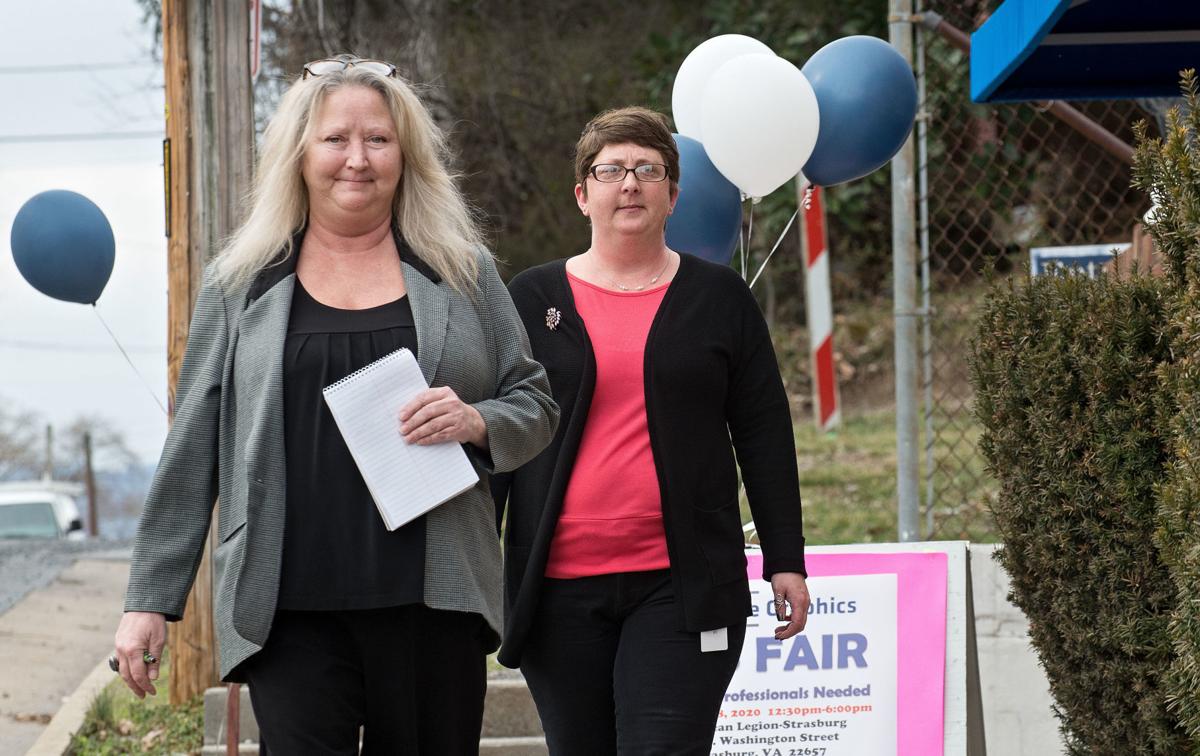 Mary Priest, left, and Kristen Gochenour, right, both customer service employees at LSC Communications, walk out of the Strasburg American Legion Post #77 after attending a job fair sponsored by Berryville Graphics on Tuesday. 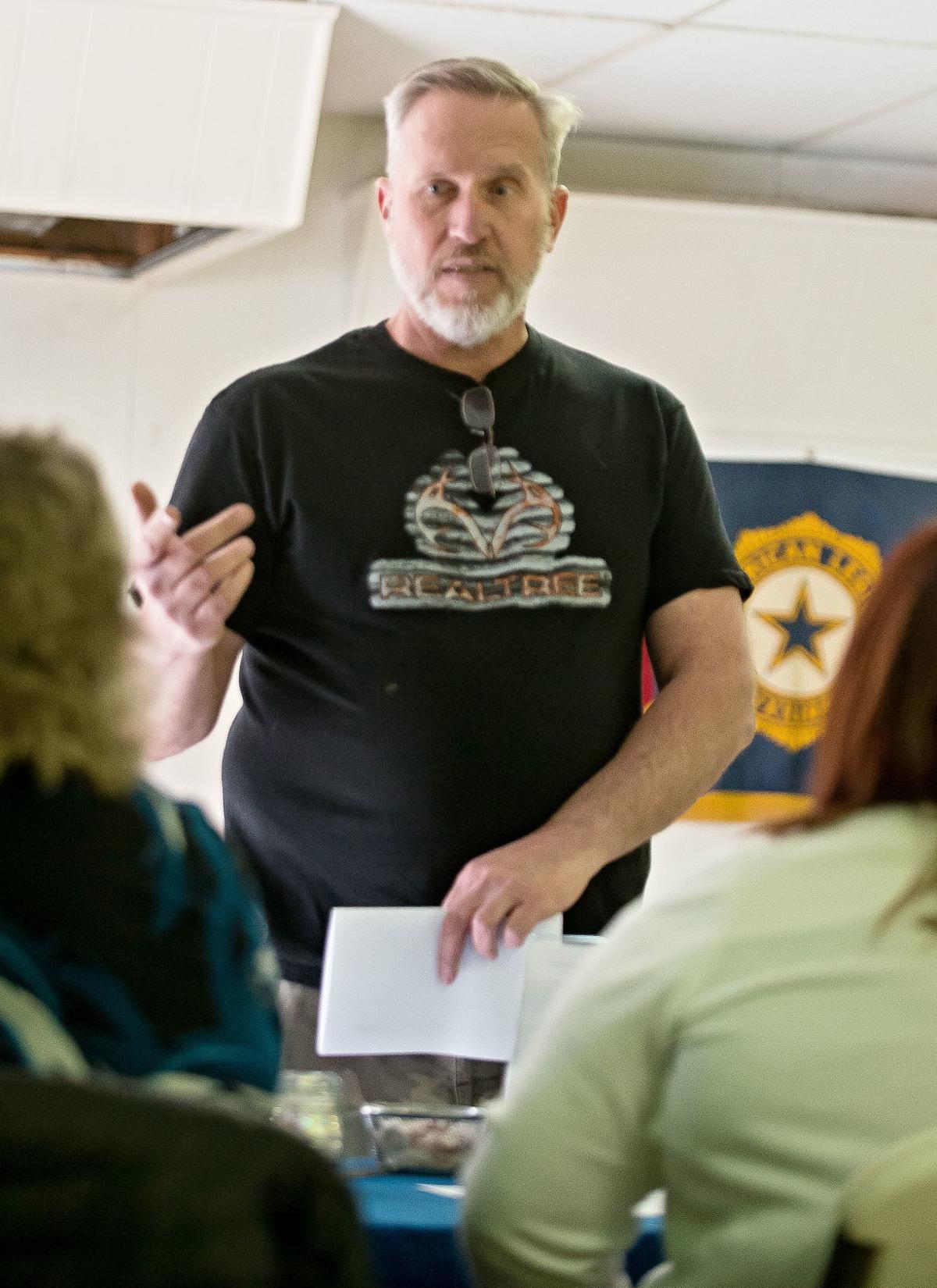 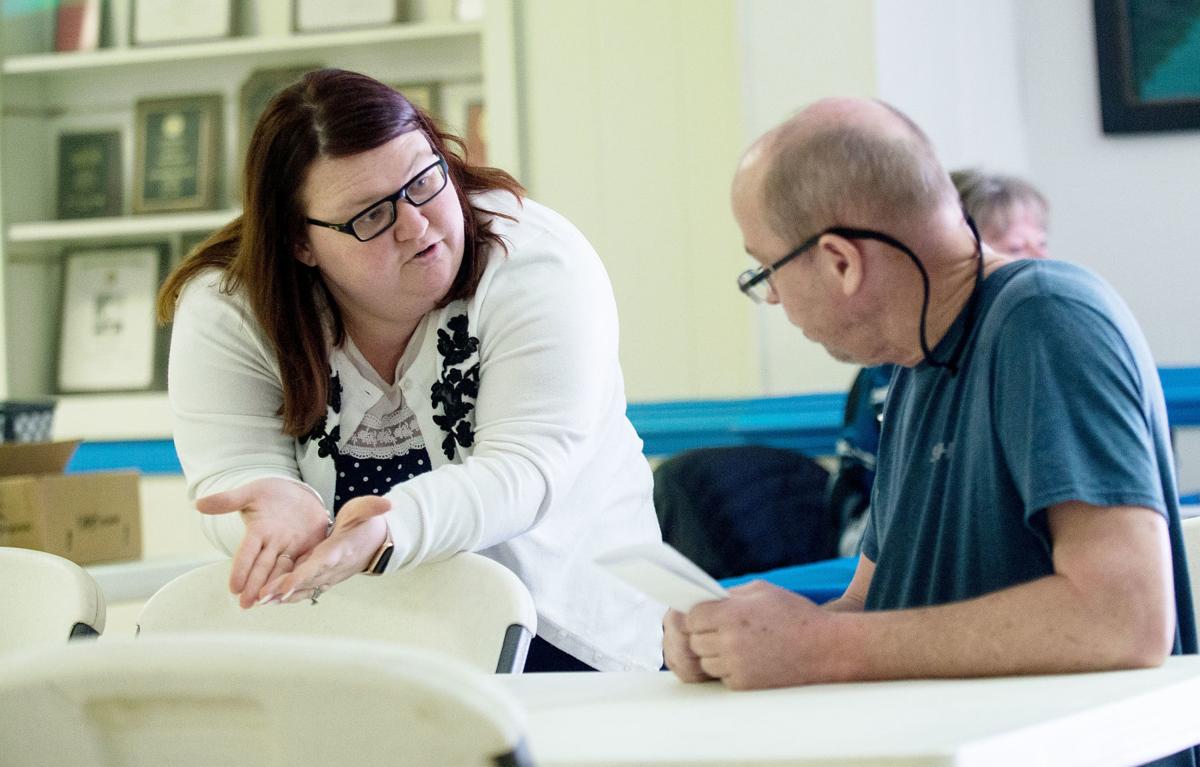 Melissa Reyes, left, a recruiter for Berryville Graphics, chats with Bobby Shipe, right, of Fort Valley, who is an assistant bindery operator at LSC Communications, during a job fair Tuesday.

Mary Priest, left, and Kristen Gochenour, right, both customer service employees at LSC Communications, walk out of the Strasburg American Legion Post #77 after attending a job fair sponsored by Berryville Graphics on Tuesday.

Melissa Reyes, left, a recruiter for Berryville Graphics, chats with Bobby Shipe, right, of Fort Valley, who is an assistant bindery operator at LSC Communications, during a job fair Tuesday.

STRASBURG – LSC Communications employees seeking new employment in the wake of an announced plant closing had two job fairs to attend on Tuesday.

The first was organized by and held at the LSC Communications company in Strasburg.

LSC in January announced it was closing its Strasburg facility as well as those in Glasgow, Kentucky, and Mattoon, Illinois. The closing of the three printing plants is expected to be completed by July 2020.

Jenna French, director of Economic Development for Shenandoah County, previously has said there are 384 people who work at LSC in Strasburg.

Barbara Frye, who has worked for LSC for 35 years, is one of many employees who attended Tuesday’s job fair at the plant.

Frye said she was shocked by the news of the closing of the Strasburg location.

“I was hoping to retire here,” Frye said.

She is moving forward, saying she is a strong person and is doing fine. She noted she has to be strong to support her fellow co-workers who are her friends – just as they support her.

“I am ready for whatever is handed to me,” Frye said.

She stopped at the table of retirement community Westminster Canterbury Shenandoah Valley, manned by Jim White, director of environmental services.

“We have lots of positions we are trying to fill, plus we do train,” White said.

There were 57 area businesses set up in three rooms at the plant for the job fair, said Rebecca Arnette, human resources for LSC Communications. A few of those businesses included Bowman Andros, Augmentation Inc., and Kraft Heinz.

“We are hoping all our employees attend,” Arnette said.

Bobby Marshall is another employee who visited the LSC job fair.

Marshall said he has worked at LSC for 15 years in bindery and as a material handler.

“I have been nervous, anxious, since the news (of the closing),” Marshall said.

He said he was at the job fair to see what opportunities might be out there.

Marshall said he would prefer to remain with LSC by being offered a transfer to its Harrisonburg location, thereby keeping his seniority.

“I would like to stay and retire with the company,” he said.

If that is not in his future, in addition to his experience with LSC, he said he also has worked in a warehouse.

Berryville Graphics, one of the largest, automated, hardcover and softcover book manufacturers in the United States with about 440 employees, hosted its own job fair at the Strasburg American Legion on Tuesday afternoon.

Bobby Shipe, an assistant bindery operator who has worked for LSC for 21 years, filled out an application for Berryville Graphics.

“You don’t expect it when you walk in and they say the plant is closing,” Shipe said.

He added he hopes his experience gives him a shot at a job with Berryville Graphics, and that his bindery manager will put in a good word for him.

Shipe said he is doing OK financially, but added that if the closing had happened a year ago that might have been different.

Another LSC employee that visited the job fair was Mary Priest, who has been with the company for 38 years. Her latest position is as a customer service planner, which she has held for nine years.

Berryville Graphics does not have such a position open but that could change at any time, the company’s representatives said as they took Priest’s resume.

Priest talked to Reyes and Pairo about how she had previously toured the plant.

“I thought it was cool. You can see all the workers,” Priest said.

“It is worth a shot,” Priest said afterward once outside.

'It was the decision we had to make': Local VBL teams react to league's cancellation of 2020 season