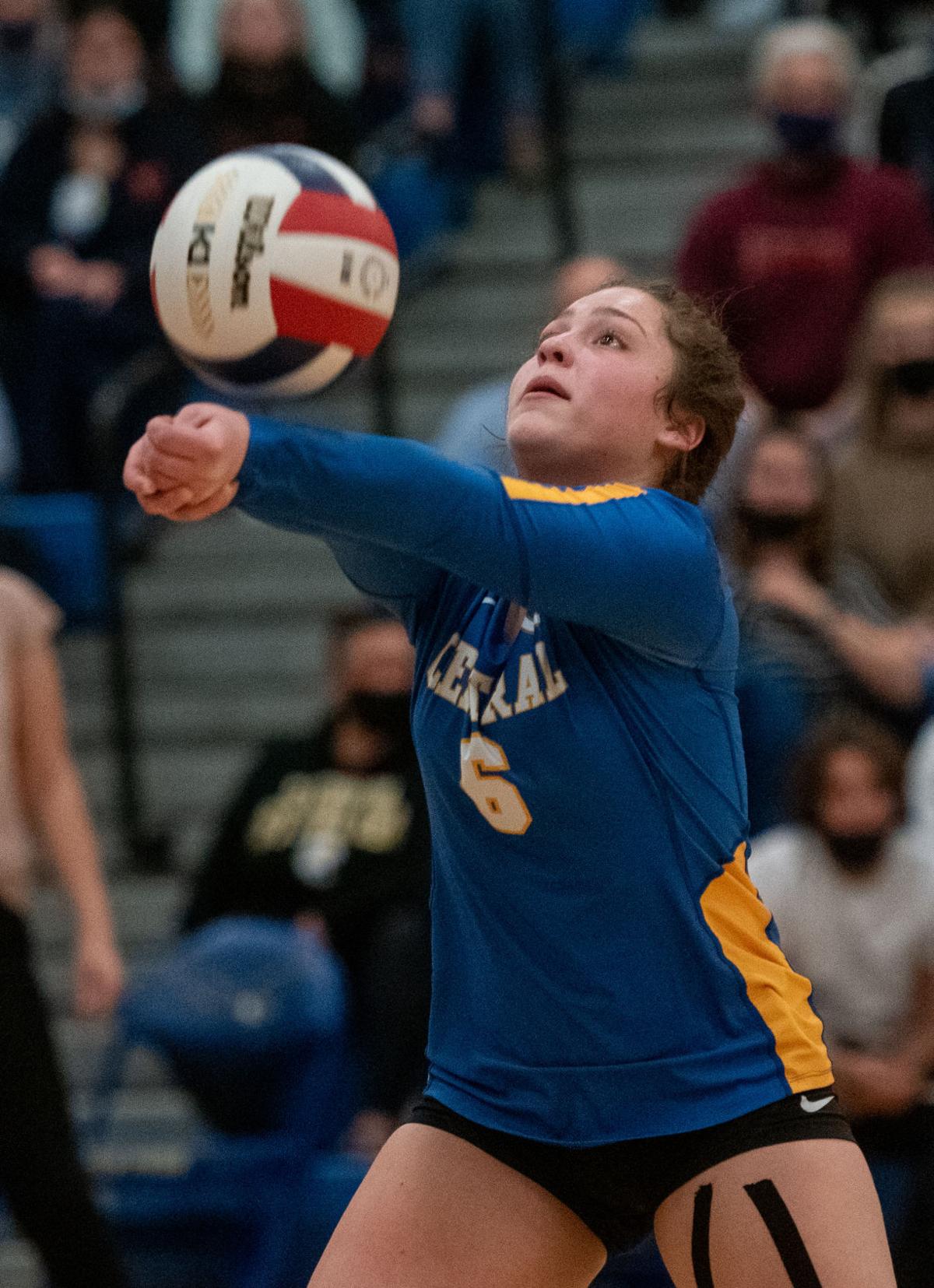 Central's Viliane Luyando Disdier digs into a shot from East Rockingham on Tuesday night in the state semifinals in Woodstock. The libero has an area-best 357 digs this season. 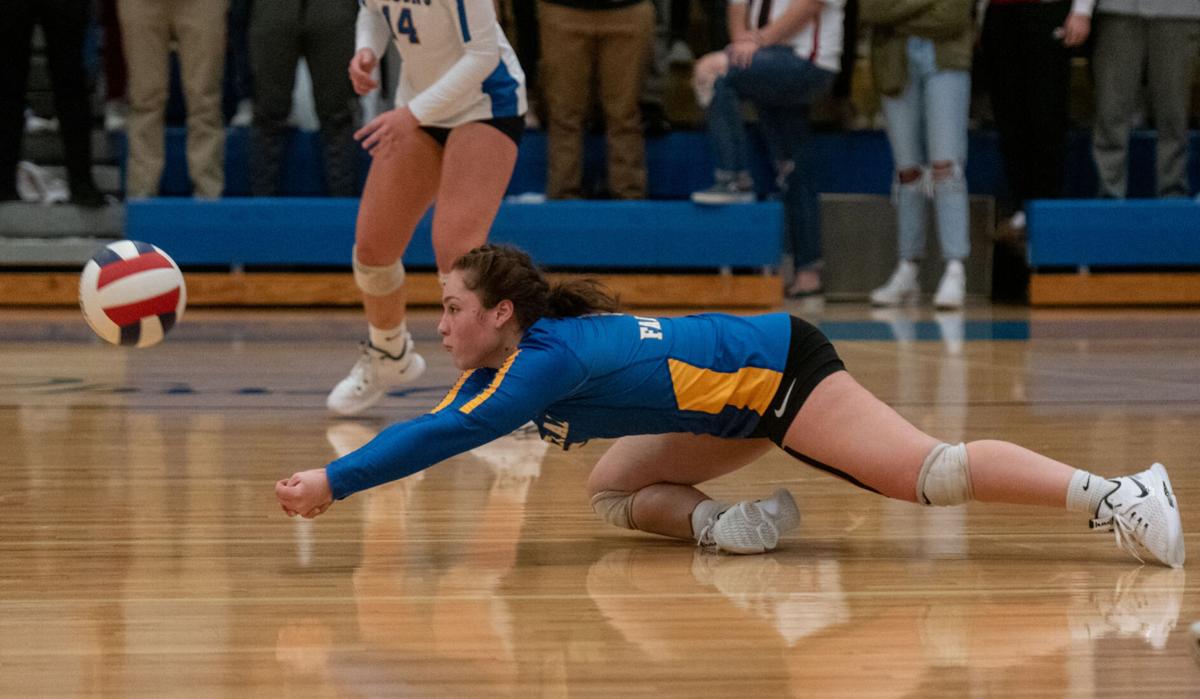 Central's Viliane Luyando Disdier dives at a shot from East Rockingham on Tuesday night in Woodstock. Luyando Disdier has helped lead the Falcons to the Class 2 state finals on Saturday against Glenvar.

Central's Viliane Luyando Disdier digs into a shot from East Rockingham on Tuesday night in the state semifinals in Woodstock. The libero has an area-best 357 digs this season.

Central's Viliane Luyando Disdier dives at a shot from East Rockingham on Tuesday night in Woodstock. Luyando Disdier has helped lead the Falcons to the Class 2 state finals on Saturday against Glenvar.

The Central senior is the team's libero, a defensive position who wears a different colored uniform than the rest of their teammates.

"I think it's really fun and it's been my dream ever since I was little, so to actually be libero is kind of fun," Luyando Disdier said. "What I like is the pride you have and that people just look for you and make sure you're there most of the time to save plays."

Luyando Disdier has been a big key to Central's success this season and one of the reasons the Falcons are playing in the Class 2 volleyball state championship on Saturday against Glenvar at the Salem Civic Center at 2:15 p.m.

"She really gets to every ball," Central coach Ashlie Clar said. "She's amazing because she is a positive leader out on the court. But she'll also push players to be better. So she means a lot to the team."

Luyando Disdier said it helps having strong hitters to go against at times in practice and when she can return the hits from her teammates it makes her feel good.

Clar said things can get competitive at times in practice.

"They have a competition, especially with Ella (Toothman)," Clar said. "She'll nail one at Viliane and if Viliane gets the ball up she'll yell at Ella. But if the same thing happens, if Ella gets a big kill, she'll get after Viliane as well. So it's fun to put some of the starters against other starters and see how they react toward each other. They get very competitive, but they just want to make each other better. And once we're done with practice then we're good."

Clar said Luyando Disdier has really improved her serve receive this season. She said most teams try to stay away from serving it to Luyando Disdier because she's so good at getting it in play.

Another key element of Luyando Disdier's play is her energy on the floor.

"I think energy is one of the most important things to have when you're playing a sport like volleyball," Luyando Disdier said. "And being one of the loudest people on the team they kind of expect you to bring the energy and they expect you to help them out and get pumped up. And it just makes the game better."

Clar said the 5-foot-3 Luyando Disdier is great at getting the whole team fired up each match.

"I think it was the regional championship game she's just jumping the highest in our little huddle there," Clar said. "And after every win she starts the slow clap. So she definitely brings big energy and when she's not energized the rest of the team isn't. So she's like a spark plug for us."

One way Luyando Disdier brings energy and excitement to the team is when she makes a kill. It doesn't happen often. But she had a few this season, including one in the state semifinals.

"That's kind of exciting," Luyando Disdier said of making a kill. "The ball just kind of comes at me, and I'm like 'Oh, I can hit it now.' And it's actually going to go over. It's so exciting. The team gets pumped up."

Luyando Disdier is one of six seniors on the team, and she said she tries to be a good leader and role model for the other players on the squad.

"I think it's important for the team to look up to you and know that you're there for them," she said. "And being one of the leaders is like everyone knows they can come to you when they have a problem or needs some help."

Funkhouser said she's a great teammate and leader for the squad.

Luyando Disdier said she first played volleyball as a freshman for Central and loved playing the game.

The Falcons won the junior varsity Bull Run District title that season, with most of this year's team on the squad. Luyando Disdier said that was a sign of what they could accomplish.

"I feel like since we won that, we were going to come really far as seniors," she said. "So this is really big for us knowing that we were district champs, and coming up and knowing that we could actually be a really good team."

Luyando Disdier played at libero on junior varsity, but last year moved to defensive specialists on the varsity squad.

She said she played on a travel team with Central, Mountain View and Strasburg players and played at libero for that team. Luyando Disdier said the experience was a good one.

"It was kind of fun getting to know them," she said. "And playing with girls on different teams and seeing their skills and techniques."

Luyando Disdier missed the first couple weeks of this season due to COVID-19 issues, and once she came back she was playing at defensive specialist. Clar said she came to her and wanted to know what she needed to do play libero.

For the season, Luyando Disdier has an area-best 357 digs and 31 service aces. She was also a first team All-Region 2B selection at libero.

Luyando Disdier and her teammates are a win away from being state champions for the first time in program history. She said it's bittersweet to know the season is almost over.

It's sad knowing that next year we won't be on the team together," Luyando Disdier said. "But it's really exciting knowing were actually going to the state championship. It's a good way to end the senior year. It's been a very good year for us."