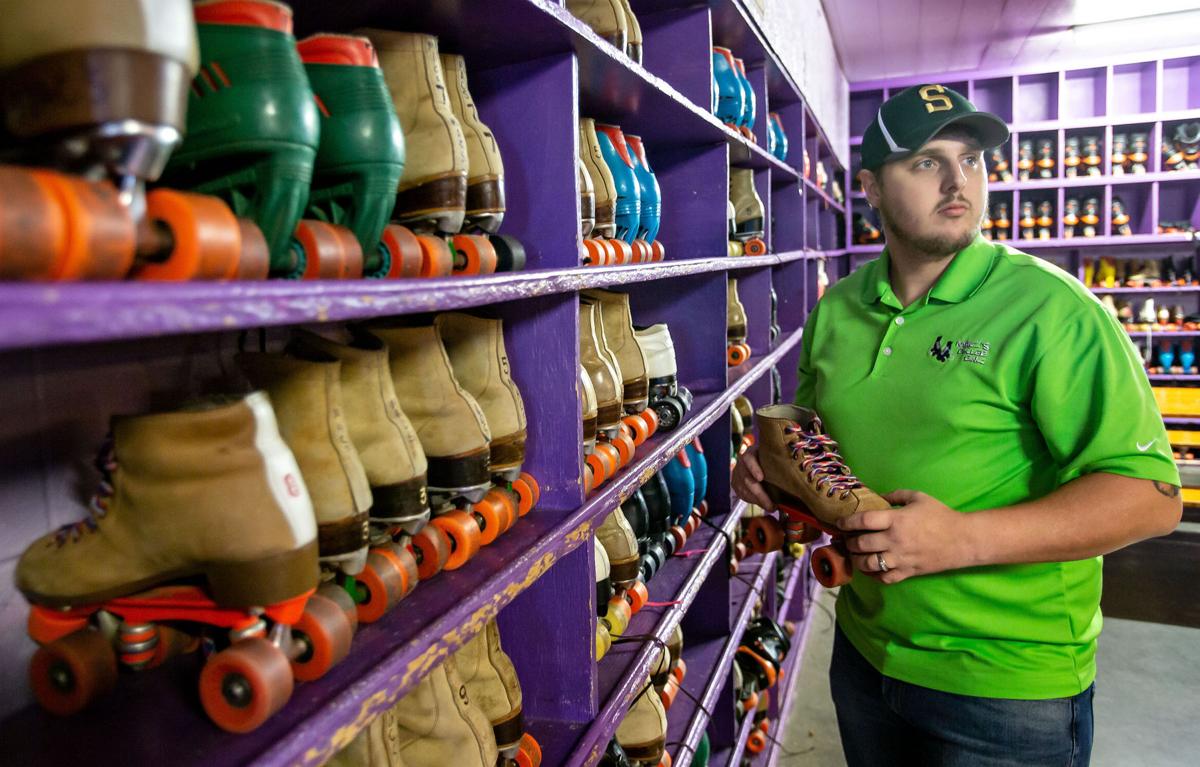 Taylor Lynch, 29, of Stephens City, stands by a line of skates inside Mac’s Roller Rink near Front Royal on Thursday. Lynch and his wife purchased the business in 2019 and are trying to keep the doors open in the midst of the COVID-19 pandemic. 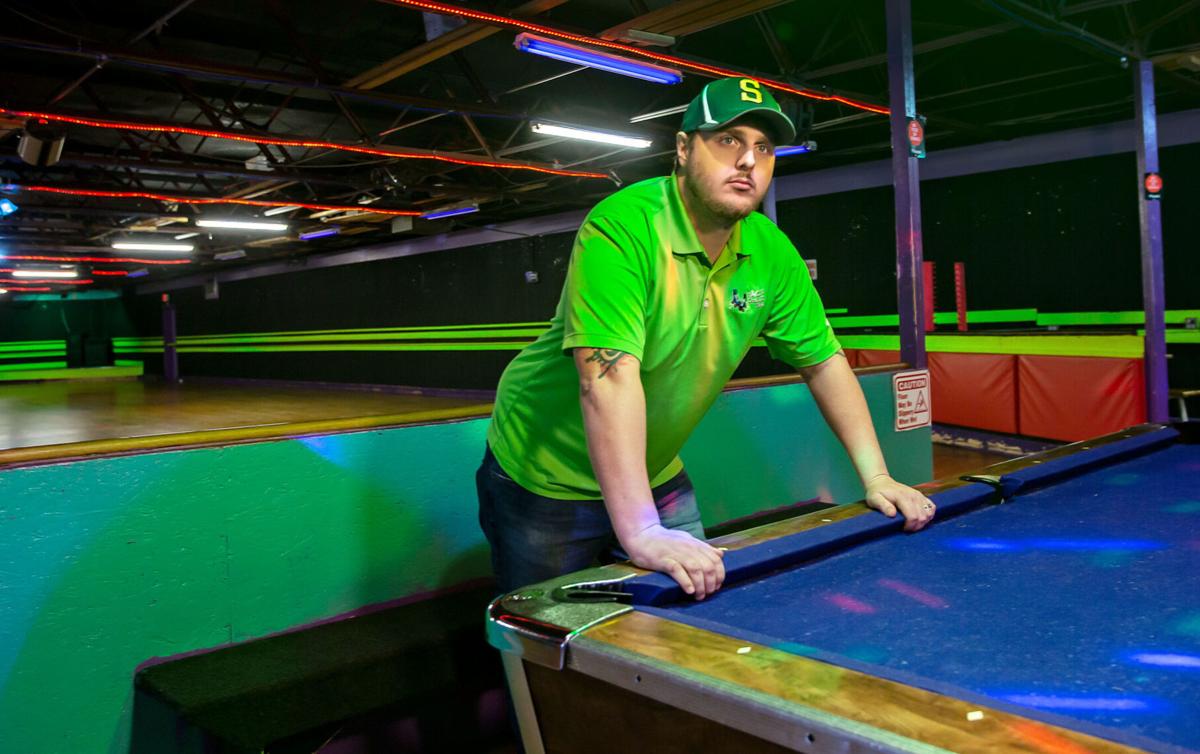 Taylor Lynch, 29, of Stephens City leans on the pool table inside Mac’s Roller Rink in Front Royal on Thursday.

Taylor Lynch, 29, of Stephens City, stands by a line of skates inside Mac’s Roller Rink near Front Royal on Thursday. Lynch and his wife purchased the business in 2019 and are trying to keep the doors open in the midst of the COVID-19 pandemic.

Taylor Lynch, 29, of Stephens City leans on the pool table inside Mac’s Roller Rink in Front Royal on Thursday.

WHITE POST — A few yards into the entrance of Mac’s Roller Rink sits a few wooden tables that serve as a party room for the rink’s guests where they can celebrate birthdays, family gatherings and any other joyous occasion.

From March to September, that area of the rink, along with every other square inch of the rink that was built in White Post off Front Royal Pike in the 1950s, sat empty.

But Taylor Lynch, who bought the rink with his wife in February 2019, still happily speaks of the folks who continue to frequent the rink and bring photographs of when they had their birthday parties in the same space as youngsters.

Lynch gets to relive those memories vicariously through his customers. But he knows that by fighting to keep his doors open, they’ll be able to have more of them.

“One of the biggest motivators I have are people telling me that their grandparents skated here. I have parents who throw parties and they’ll bring me pictures of their parties here when they were 8 years old standing right here,” Lynch said, pointing to the worn party tables. “It’s so cool. It’s definitely a motivator to keep it going.”

Mac’s Roller Rink is considered by many to be a staple of the community. Its purple exterior is hard to miss at 5030 Front Royal Pike.

Lynch and his wife, Madeilyn, purchased the rink in early 2019 with the help of her father, mortgage broker Raymond Heflin. The couple built a relationship with the rink’s former owner, Max Armentrout, and developed a love for the decades-old business.

Their first year of business proved to be the best the rink had seen, the couple said.

They had family nights, worked with a local middle school wrestling team to provide practice space, hosted glow-in-the-dark yoga classes — anything they could to do to be of help to the community, the couple said.

The couple celebrated their first year of business in February 2020. But a few weeks later, they were closed down when the COVID-19 pandemic took hold of the United States.

“It was going so well,” Taylor Lynch said. “Then March just hit us like a brick wall and tore everything out from under us.”

The rink was closed from early March through September and now operates on limited hours, including 7-9 p.m. Friday, 4-9 p.m. Saturday and 12-4 p.m. Sunday. Taylor Lynch said the rink is down to just one other employee.

The couple said they’ve had to throw their savings at their new business to keep the doors open, which included paying bills for about seven months while the rink was closed.

“Speaking from a business owners perspective, the government-issued 'relief funding' has offered us no form of relief from these stressors. Mentally knowing the fate of our business is in the government's hands is far from relief,” Madeilyn Lynch said. “Opening our doors and seeing the parking lot packed, and customers mingling, is what we've been dreaming of seeing again.”

Business has been slow since reopening. Taylor Lynch said the rink could accommodate around 150 people, but that they’ve been nowhere close to that number.

On a typical Saturday night a year ago, he said they would have seen about 200 customers. Now, he said they’d be “absolutely ecstatic” to see 40.

“Since we opened back up in September, it’s hard to say we’re even staying afloat. Is it paying its bills? No. So, we’re still pulling out of our savings to keep the door open. That’s the part of the equation where it only lasts for so long,” he said. “If you’re doing that every month, how long until it’s over? Unfortunately, that’s the case for me and thousands of other business owners.”

They have, however, seen a small uptick in guests over the past few weeks that they hope will continue.

That’s been enough to keep trying.

“As long as we can help it, we will do everything in our power to not close our doors,” Madeilyn Lynch said.

The smiles. The memories. The nostalgia. The Lynches said that’s what makes the fight worth it.

“If I could go back and predict this whole thing and ask myself, ‘Would you still do it?’ Absolutely,” Taylor Lynch said. “We want to spread the word out there. I don't want people to forget that we’re here. With everything going on this year, it’s easy to forget. But the fact of the matter is that we’re not going to be here much longer if we can’t get the community on board and coming back. We’re hoping that things will turn around for us soon.”

In an effort to help with funds, the couple has started a GoFundMe page, located at https://www.gofundme.com/f/28bkmttww0.