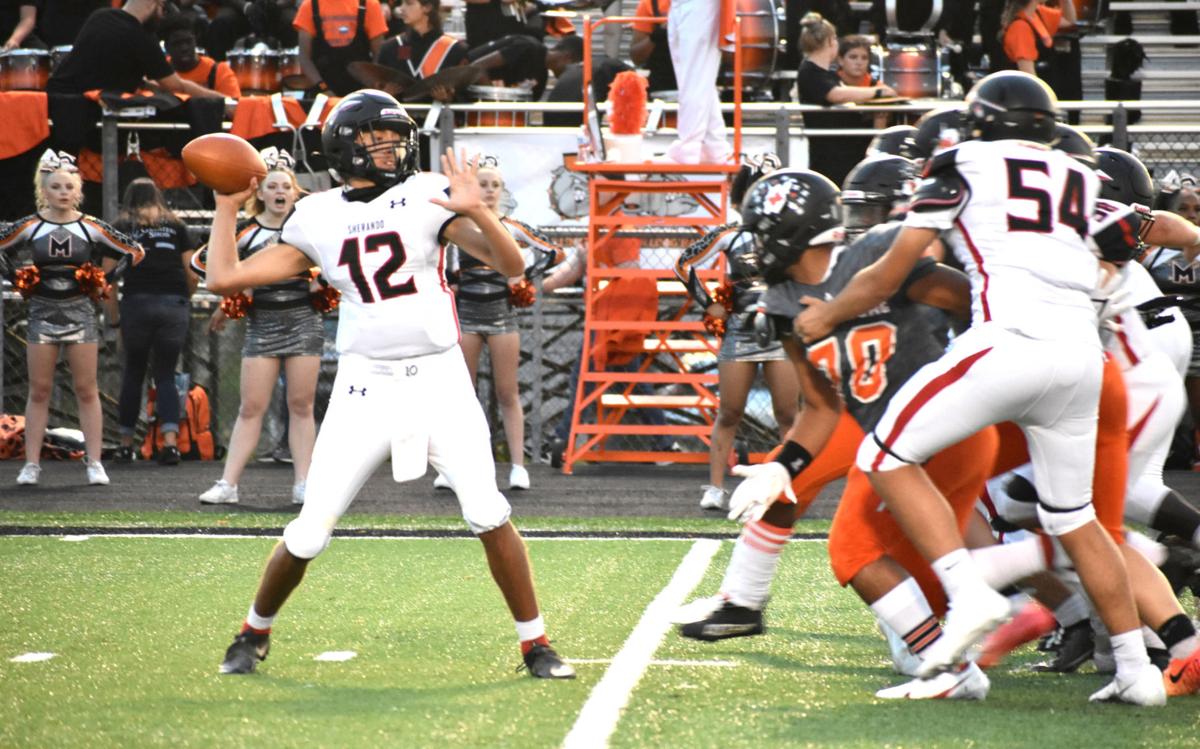 Sherando quarterback Dylan Rodeffer throws just before the Martinsburg rush arrives in the first quarter of the Bulldogs’ 58-7 win on Friday night at Cobourn Field. Martinsburg had a 606-154 yard edge and Rodeffer was 8 of 27 for 147 yards, with one touchdown and two interceptions. 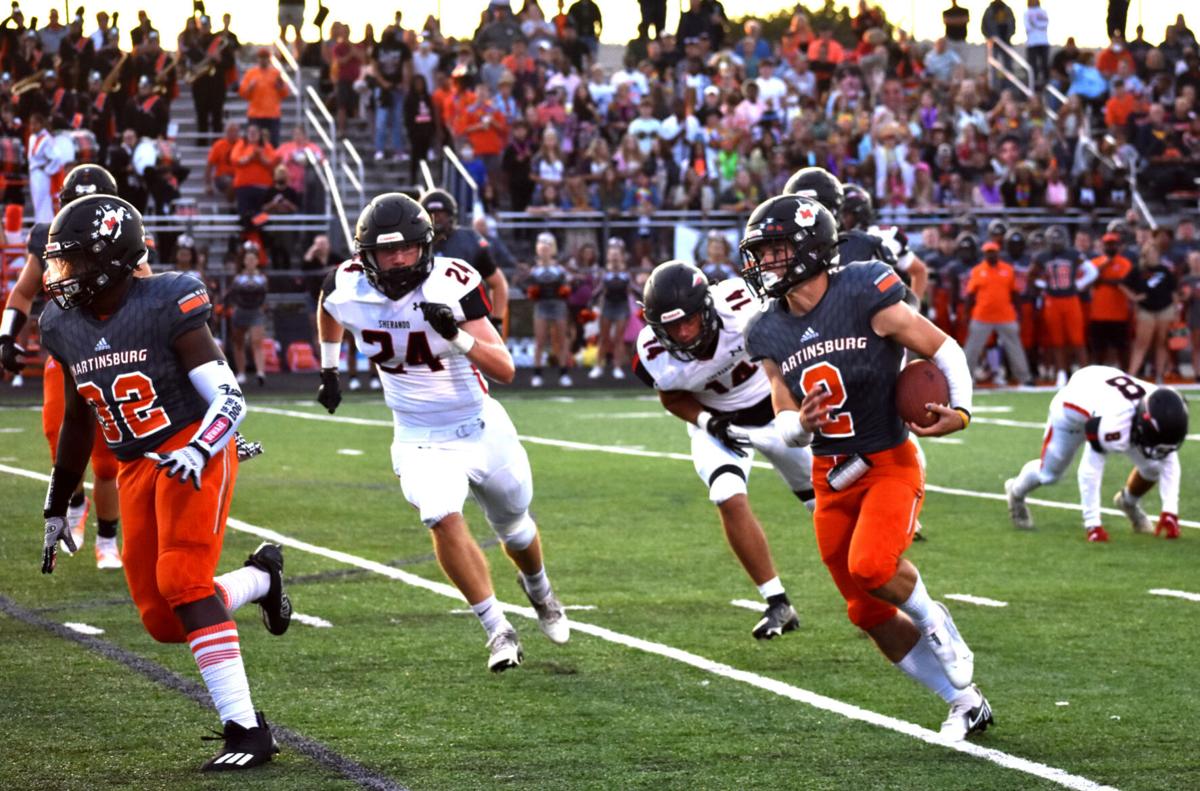 Murphy Clement cruises in for an 11-yard touchdown run to open the scoring as Sherando’s Zach Symons (24) and Trey Kremer (14) pursue. Clement passed for four touchdowns and 163 yards and ran for 46 yards to help the Bulldogs rout Sherando 58-7 on Friday night at Cobourn Field.

Sherando quarterback Dylan Rodeffer throws just before the Martinsburg rush arrives in the first quarter of the Bulldogs’ 58-7 win on Friday night at Cobourn Field. Martinsburg had a 606-154 yard edge and Rodeffer was 8 of 27 for 147 yards, with one touchdown and two interceptions.

Murphy Clement cruises in for an 11-yard touchdown run to open the scoring as Sherando’s Zach Symons (24) and Trey Kremer (14) pursue. Clement passed for four touchdowns and 163 yards and ran for 46 yards to help the Bulldogs rout Sherando 58-7 on Friday night at Cobourn Field.

MARTINSBURG, W.Va. — West Virginia’s most dominant football program showed what it’s made of on Friday night.

The Martinsburg football team continued its mastery of Sherando with a 58-7 victory on Friday night at Cobourn Field at Walker Stadium.

The Bulldogs (3-0) won for the fifth straight time and the 10th time in 11 meetings against the Warriors, who dropped to 0-3 for the first time since 2001. Martinsburg has eight Class AAA state titles since 2010.

Martinsburg outgained Sherando 426-53 in the first half and picked up 19 first downs and scored on all six possessions to take a 44-0 lead at the break. The Warriors had minus-6 yards rushing on 15 attempts in the first half, with an eight-yard sack of quarterback Dylan Rodeffer contributing to that total.

Overall, Martinsburg had a 606-154 yard edge. The Warriors had minus-15 yards on 28 carries, taking a few other big losses in addition to the sack of Rodeffer.

Rodeffer (8 of 27 for 147 yards) and backup Micah Carlson (2 of 3 for 22 yards) each made some strong throws against Martinsburg’s pressure and Cover 0 man coverage, but the Bulldogs made several excellent plays in the secondary for interceptions (two of Rodeffer, one of Carlson) and pass breakups.

The Warriors’ job was made even tougher when star receiver AJ Santiago (14 catches, 233 yards, two TDs entering Friday) left the game for good after laying out to make a beautiful diving 32-yard catch early in the second quarter and Martinsburg leading 22-0. Santiago finished with three catches for 33 yards.

“I think Martinsburg is exactly who we thought they were going to be,” Sherando coach Jake Smith said. “They’re a good team, year in and year out. That’s a state-championship quality football team that we played out there tonight. They’ve got a lot of guys who can make plays.”

Martinsburg was pretty much unstoppable on offense. The Bulldogs fumbled the ball at the Warrior 11 on their first possession of the second half, but then scored on their next two drives to complete the scoring with 4:27 left in the third quarter.

Quarterbacks Ezra Bagent (15 of 22 for 169 yards and three touchdowns) and Murphy Clement (6 of 6 for 163 yards and four TDs; seven carries for 46 yards and a TD) had a hand in all eight of the Bulldogs’ TDs. The duo had plenty of help getting in position to throw those TDs — running back Braxton Todd, a Bowling Green commit, had 13 carries for 212 yards and a 10-yard receiving touchdown on the first play of the second quarter that made it 22-0.

“We’ve got a lot of really good skills guys, and we try to move the ball around and try to get a lot of guys in there,” said Martinsburg coach Britt Sherman, who was pleased to see Jacob Barrick get more involved and haul in 12- and 43-yard TD passes.

Sherando punted after five plays on its first drive and three on its second. And while the Warriors never got their running game going, they at least put some pressure on the Bulldogs with the passing game beginning with their third drive.

Santiago’s diving catch on a Rodeffer pass at the Martinsburg 35 was Sherando’s first big play of the game. Four plays later, on fourth-and-6 from the 31, Rodeffer tried a deep pass down the left sideline to Cam Sullivan, who frequently lined up out wide during the game. But Martinsburg broke up the pass, and two plays later the Bulldogs were in the end zone on a 57-yard catch-and-run by Roman Pierson (five catches, 102 yards, two TDs) that made it 30-0.

Carlson came in for Sherando’s next possession. He floated a nice 25-yard pass to Gavin Blye (three catches, 32 yards) to the Martinsburg 30, but he was picked off two plays later on a deep throw to the left.

Sherando finally finished a drive on the first possession of the second half when Rodeffer connected with Sullivan on a 48-yard pass to the Martinsburg 10, then rolled right and hit Blye on a comeback route in the front of the end zone. Cody Crittenden’s extra point made it 44-7.

“We knew we needed to take some shots to really break up the Cover 0 that they were playing,” Rodeffer said. “They were playing man and sending the pressure. They’ve seen the tape. Our line’s young. They knew to try and send some pressure and try to get us overwhelmed.

“But after a while, I seemed to connect on some of the passes with some of the receivers. That was big for us. I’m proud of how the receivers reacted after AJ went out. He’s a great receiver, and they fought hard.”

The Bulldogs just happened to come up big when they needed to in the secondary to stop the Warriors from more success.

“They definitely made a few more explosive plays than we did,” Rodeffer said.

Having Santiago would have helped, but the Warriors felt they took some strides as a team on Saturday. Sherando was dangerous on special teams, returning six kickoffs for an average of 26 yards per attempt, with Blye recording 108 yards on three kickoff returns. The Bulldogs had several kickoffs go out of bounds while trying to keep the ball away from the Warriors.

“I’m just proud of the team for not giving up,” Rodeffer said. “I think we fought all four quarters. We were getting punished out there, and we still held our heads high.”

The Warriors were also led by Aydan Willis (13 tackles, six solo) and Connor Waymire (11 tackles, eight solo). Hudson Clement, Murphy’s brother, had seven catches for 102 yards and a TD for the Bulldogs.

Sherando next returns to West Virginia on Sept. 17 to face Musselman (1-2).