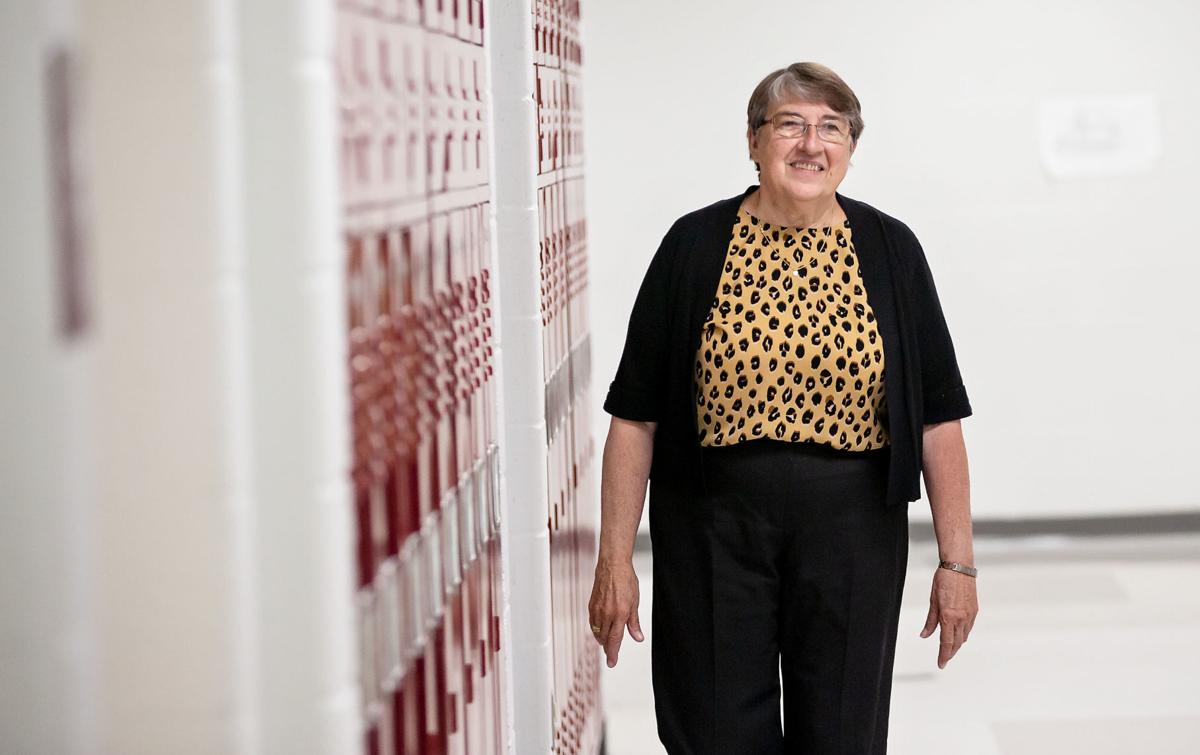 Mary Francis Bukva, dean of students for Warren County High School, walks down the hallway of the school on Thursday. Budkva officially retired Friday after 48 years of service. 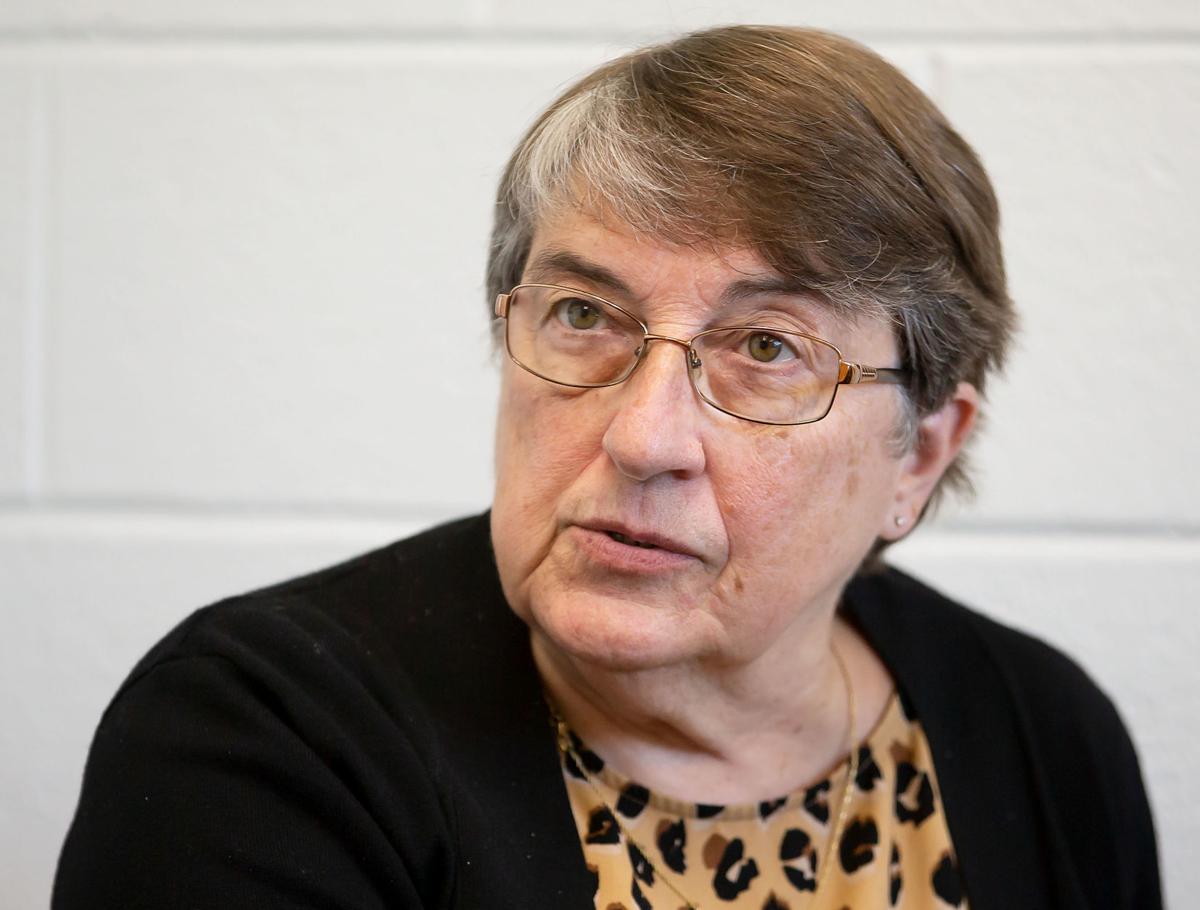 Mary Francis Bukva, dean of students for Warren County High School, walks down the hallway of the school on Thursday. Budkva officially retired Friday after 48 years of service.

Students and faculty called her Ms. B when they saw her at Warren County High School.

Mary Frances Bukva retired Friday after working for 48 years in public education, and she spent the last weeks packing up her belongings — pictures, certificates and awards, old grade books.

Bukva, the school’s dean of students and a former physical education teacher, recently reflected on almost a half-century of teaching children and then working in the school’s administrative offices. Bukva spoke in-person as faculty and staff prepared for the last days of the school year while students took their final tests.

Bukva taught physical education for the first 30 years and then changed to an administrative role.

“But it came at a good time because my knees are not what they used to be and so it was a good switch,” Bukva recalled.

“Well, all my life I guess ... all I really ever wanted to be was a mother,” Bukva said. “But then my older sister went to college and so it was kind of expected that we would follow suit.”

Bukva’s parents didn't go to college, so her older sister was the first to do so.

“In my day, the only jobs really available for women were teachers, nurses or, like, secretary positions and I didn’t really want to be stuck behind a desk,” Bukva said. “I’m not very good with blood sometimes — my kids I can do alright sometimes and helping kids who fall down here and I’m the first one they call, bloody nose or something — I didn’t think I could do that ...”

Bukva graduated from the old Warren County High School in the class of 1968. At that time the county didn’t offer extracurricular sports for girls, in part, she said, because of the continuing integration of the school system. Girls only played sports in physical education classes, she said.

“But I’d been an outdoor person all my life because I grew up on a farm and my father only had girls so we had to help,” Bukva said.

Bukva attended Longwood University, then called Longwood College, in Farmville, which was an all-girls school at the time. She majored in English because she likes to write, she recalled. A student living down the hall in the dormitory suggested she take a fencing class to receive required physical education credits. The coach then asked her to join the school’s fencing team. Bukva switched majors to physical education and took an extra class one summer to earn enough credits to graduate on time.

A teaching position opened in the Warren County school division. Bukva interviewed with then-Assistant Superintendent Bob Leonard, and she took her first job teaching physical education at Warren County Intermediate School, now Ressie Jeffries Elementary School. The division moved the intermediate school faculty to the former 15th Street school in the mid-1970s, where it became a junior high school serving seventh through ninth grades, Bukva recalled. After a few years, the school changed to a middle school for seventh and eighth grades.

In 1999, after 26 years at the middle school, the division transferred her to the high school where she taught until she became an administrator.

“The biggest switch was when I had to leave my school family at the middle school and go to the high school because I had never taught anything past ninth grade, so now I was teaching 10th grade for the first time and teaching driver’s education, which I was endorsed in but had never taught it before, see?” Bukva said. “I hated leaving the middle school, ‘cause I had been at that grade level for 26 years.”

Bukva’s colleagues at the middle school saw her through the birth of her four children and the death of her father, she said. When she moved to the high school, Bukva said, she recalled thinking she couldn't survive without the support of her friends at her previous job.

“But then this group has picked me up and saw me through the death of my mother and my husband,” Bukva said.

Bukva spoke about how she saw students' attitudes change since she started teaching.

“The kids are basically the same but not the same,” Bukva said.

In her first year as a teacher, classes were separated by gender. Bukva was then only seven or eight years older than the girls. She maintained friendships with many of her early students over the years. Later, she would teach the children and grandchildren of her former students.

“But the kids are basically the same except ... I think that they lost a little respect for authority,” Bukva said. “I think they had more of that when I first started teaching and now they feel like — the keyword I think is entitlement.

“They think they’re entitled to everything and I like for people to have to work for something and not just feel like it’s gonna be handed to ‘em and, with having the seniors to work with the last five or six years, you know, I really have to push them to say we’re not just going to give you this diploma,” Bukva said. “You’ve got to do something to earn it and you’ve got to pass your (Standards of Learning tests) and your classes and if you don’t want to put forth the effort ... you’re just not entitled until you do that.”

While the state requires students now pass the SOLs to graduate, Bukva said the education system doesn’t challenge them any more than it did years ago. She noted that the state has even “slacked off” on the graduation requirements. The state had required students to pass six or nine SOLs, depending on the type of diploma they sought. Now the state requires five passing SOLs regardless of the diploma, she said.

The COVID-19 pandemic forced schools across the country to adjust the way they educate children. Teachers held classes via online video services such as Zoom.

Bukva said she never expected to spend her last couple of years working during a pandemic.

“But this last 15 months has been ... a real challenge for everybody, and I’m more of a pencil-paper person,” said Bukva, admitting that she doesn’t like working with computers.

The school system provided the equipment students needed for their classes, such as laptop computers and wi-fi “hotspots” to connect to the internet, Bukva said.

“It’s been hard this year with seniors because they only came (to the school) one day a week initially, and then they got to coming more than that,” Bukva said. “But if they were all virtual, I never saw ‘em and to fuss at ‘em — and I did fuss at ‘em — to fuss at ‘em to say you’ve got to do this, you know, get this done. I couldn’t do that, you know.

“I’d send them letters, you know, or make phone calls home,” Bukva said. “But it wasn’t the same as (students) sitting in my office and me reaming them for a little bit.”

In the past, Bukva said if she ran into students outside school, she could remind him or her to do the work, likely embarrassing them in front of their coworkers or friends.

Bukva said she and longtime Principal Ernestine Jordan, who has also worked more than four decades in the school system, had planned to retire at the end of last year. The veteran educators changed their plans when Virginia closed schools last March, Bukva said. Bukva added that, at the time, she felt like, “I don’t want to end the last year just walking out the door because it closed, so I wanted a little more closure.”

“Our theme song was if we make it through December, you know, if we could get that far, maybe we could make it the rest of the year,” Bukva said.

Bukva and Jordan made it to June 12 and attended the Warren County High School graduation — held in person this year — where they received honors for their decades of work in education.

The dean of students position is similar to that of an assistant principal but works under a 10-month contract and receives a teacher’s salary and a stipend. The assistant principal works under a 12-month contract and receives an administrator salary. Most deans of students hold or are working on a master’s in administration. Bukva said she does not have a master’s but was grandfathered in when the requirements changed.

“The only thing I can’t do (as a dean) compared to an assistant principal is observe teachers and ... actually critique them, even though after 48 years I can pick out a good teacher as well as anybody else,” Bukva said.

When she first taught physical education, it was not uncommon for her to have to teach 200 students a day or about 40 per class, including health. Teachers of other subjects rarely had that many students per class, she said. The state reduced the number of students for classroom teachers but not physical education. Technology also changed and classrooms come with “smartboards” and each student has a laptop computer.

“So they’ve got lots of things to improve the teachers’ ability to teach,” Bukva said.

Schools have put more emphasis on physical education since the early 1970s, and teachers are more aware of the need to stress the importance of staying active, Bukva said. Physical education teachers still need four years of college and people don’t realize how many sports classes, each only counting as one credit, colleges require for such a degree, Bukva said. She also had to take classes in anatomy and physiology — the same classes required for pre-med students.

With retirement around the corner, Bukva reflected on her time in education.

“Well, I can certainly say that ,” Bukva said. “You know I don’t think I would have stuck around forever, but you have to love kids if you’re gonna be in education and then you make so many friends with the people with whom you work.”

"You have to love kids if you’re gonna be in education and then you make so many friends with the people with whom you work."

Mary Frances Bukva, who retired Friday after 48 years in education