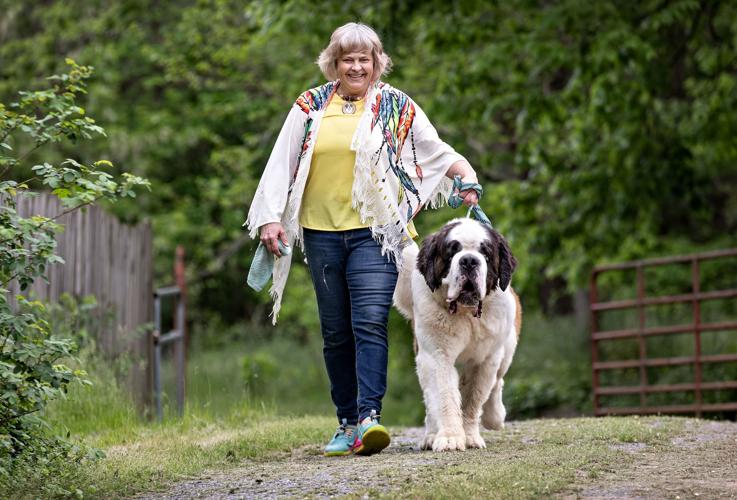 Chew Dat Foods owner Jennifer Hanger walks her 185-pound Saint Bernard, Legend, outside her Maurertown home. Her desire to make her St. Bernard’s healthier led to her making her own dog food, which evolved into a business. 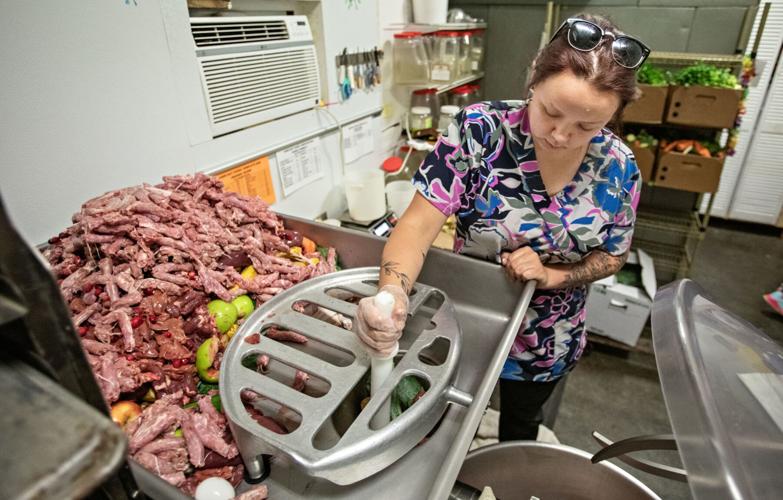 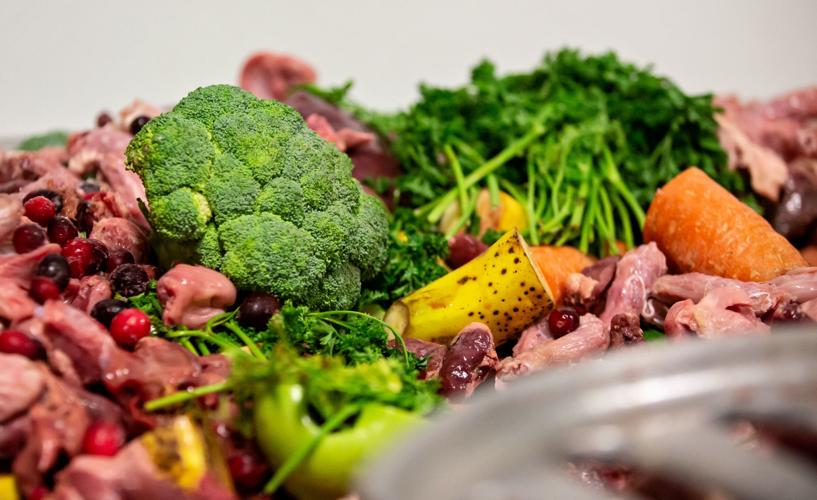 An assortment of vegetables, bananas, and berries are included in the dog food. 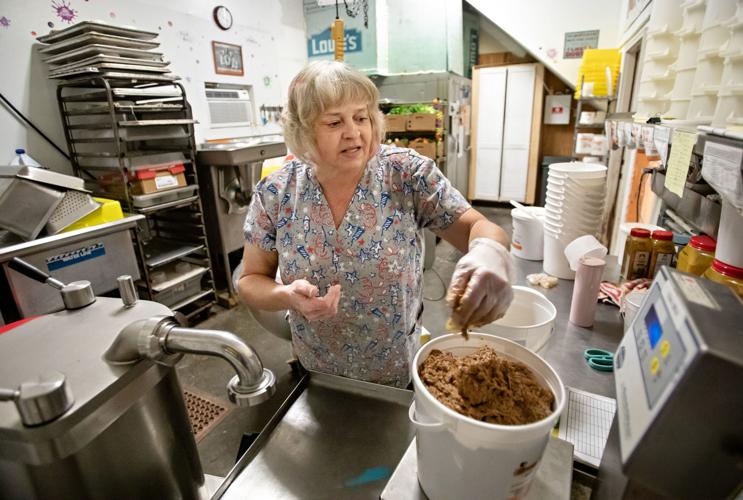 Jennifer Hangar weighs a bucket of her final product after it went through the sausage stuffing machine at left.

Chew Dat Foods owner Jennifer Hanger walks her 185-pound Saint Bernard, Legend, outside her Maurertown home. Her desire to make her St. Bernard’s healthier led to her making her own dog food, which evolved into a business.

An assortment of vegetables, bananas, and berries are included in the dog food.

Jennifer Hangar weighs a bucket of her final product after it went through the sausage stuffing machine at left.

Local pet food store owners have created their own dog food to improve the health of their dogs.

Chew Dat Foods is a small pet food store in Maurertown that opened in 2016. Co-owners Jennifer and Steven “Fuzzy” Hanger have been married for 29 years, and through their small business they sell raw dog and cat food they created.

The Hangers own 10 Saint Bernards and three cats. Their dogs often compete in dog shows and it takes around 300 pounds of food each week to feed their dogs to maintain a certain figure. One of their heavier dogs weighs up to 185 pounds.

Many people would come up to the Hangers during the dog shows and ask them what they were feeding their dogs because they thought they looked fantastic.

"I told them I was making my dogs raw food and feeding it to them," Jennifer said.

This led to people asking the Hangers to make food for their dogs.

Jennifer said she used to feed kibble to her 14 Saint Bernards that she had at the time, but dogs kept dying at young ages of cancer so they couple decided to research the nutritional information of the food they were feeding their dogs.

“I started learning about some of the stuff they’re allowed to put in dog food that are known cancer-causing ingredients,” Jennifer said.

This led to the Hangers making the switch from kibble to creating their own raw dog food. “I started making the food for myself because I just got tired of losing my dogs at age 7 or 8, now most of them live up to age 10, 11 now,” Jennifer said.

“Knock on wood, but I haven’t had a case of cancer in my dogs since I made the switch and I think a lot of it has to do with the ingredients in my food because I chose ingredients that are known as anti-cancer ingredients, like broccoli and kale which are known to be really good at preventing cancer and slowing the growth of cancer,” Jennifer said.

All of the ingredients are locally sourced and are ground up, mixed together, and packaged at the store.

Customer Carol Ross, who has three chihuahuas, bought a 10-pound bucket of the original blend to feed her dogs that usually lasts two weeks. “As soon as I gave it to them, they loved it," Ross said.

The Chew Dat Foods operation is managed by the Hangers with one employee. Chew Dat Foods currently serves 300-400 customers in parts of Virginia and Maryland.

A majority of the food sold is through free deliveries. Steven drives a bus with freezers installed to keep the food fresh and makes deliveries every Saturday. There are different checkpoints where Steven stops so that customers can meet him to pick up their orders. Every Saturday is a different route that alternates each week.

The Hangers also wanted to minimize the waste of packaging for their food. Originally, the food was packaged in plastic bags, but food would leak out. Instead of plastic bags, the Hangers quickly began selling food in reusable plastic buckets.

Customers have the choice to buy 2-, 5-, and 10-pound buckets of food. “Customers just use the food out of the buckets, then we give them new buckets of food in exchange,” Jennifer said. “We run the buckets through a wash, rinse, and sanitize process to clean them so that they can be reused.”

For the original blend, prices include $6.50 for 2 pounds, $15.75 for 5 pounds, and $30.50 for 10 pounds. Jennifer says the price of kibble is significantly less than her food, but in terms of raw dog food, it is lower compared to other brands.

“Ten to 15 years ago raw food was less than 1% of the dog food industry and is now 10%, which is huge,” Jennifer said. “I believe it has benefited my dogs and I really want more dogs and cats eating this because I believe it’s better for them.”