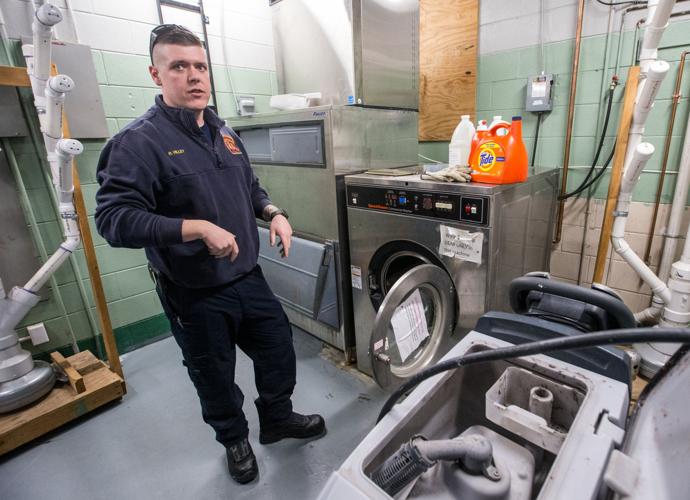 Harrisonburg firefighter Robert Hilley talks about the washing machine at the fire station dedicated to use on fire-contaminated gear. 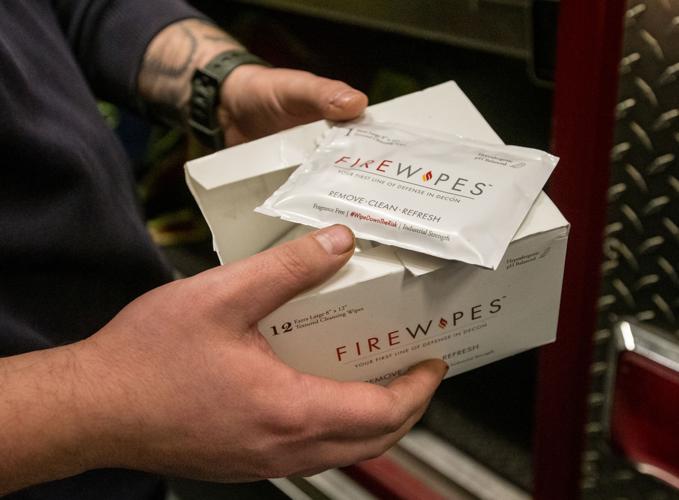 Harrisonburg firefighter Robert Hilley shows off wipes carried aboard their fire engines to help decontaminate firefighters and their gear. 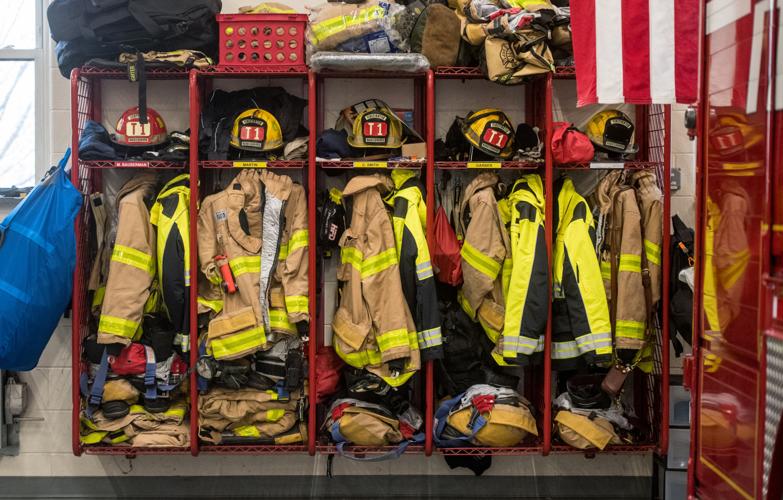 Harrisonburg Fire Department has switched to open-sided lockers, which helps air out equipment and protective gear. 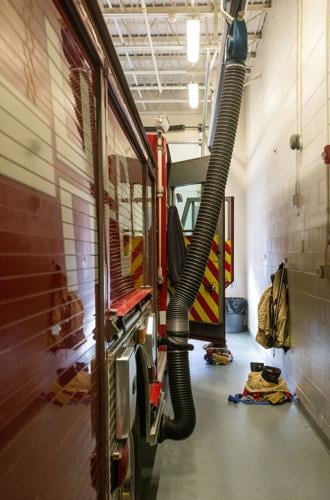 An exhaust hose is connected to a fire engine at Harrisonburg Fire Department Station 1 to help reduce exposure to exhaust fumes.

Harrisonburg firefighter Robert Hilley talks about the washing machine at the fire station dedicated to use on fire-contaminated gear.

Harrisonburg firefighter Robert Hilley shows off wipes carried aboard their fire engines to help decontaminate firefighters and their gear.

Harrisonburg Fire Department has switched to open-sided lockers, which helps air out equipment and protective gear.

An exhaust hose is connected to a fire engine at Harrisonburg Fire Department Station 1 to help reduce exposure to exhaust fumes.

Whether it’s an injury from falling debris or smoke inhalation, firefighting is a dangerous job that requires physical and mental fitness and agility, said Matt Tobia, chief of Harrisonburg Fire Department.

However, one of the most significant risks that may be less well-known, harder to spot, and more difficult to track is the risk of cancer in all its forms, which is significantly higher among firefighters who face repeat exposure to carcinogens in their work.

“The reality is, what’s really killing firefighters today is cancer,” said Matt Tobia, chief of Harrisonburg Fire Department. “It is probably the leading topic of discussion in the American fire service today.”

According to a 2015 study of nearly 30,000 firefighters completed by the National Institute for Occupational Safety and Health, firefighters showed higher rates of certain types of cancer than the general population.

According to the International Association of Firefighters, cancer is the leading cause of death among firefighters.

The risk of cancer became a reality for Anthony Whetzel, a 33-year-old firefighter from Broadway, who was diagnosed with colon cancer in April 2017.

“He started noticing some things not right with his body. He went to the doctor, and they said it’s something that was pretty common,” Drenna Whetzel said. “Then, a year later, it got worse. There was bleeding, huge weight loss, no appetite or anything.”

When Anthony Whetzel returned to the doctor, he had a colonoscopy, and they determined he had cancer. Because Whetzel had no family history of colon cancer, Drenna Whetzel said people in the couple’s network encouraged them to find support through firefighter cancer organizations.

“Just a superb guy, very dedicated, cared about people,” Holloway said. “We were all hoping and praying there would be a more positive outcome.”

When he was diagnosed, Drenna Whetzel said she was seven months pregnant with their daughter, and the couple also had a three-year-old son.

To qualify for workers’ compensation benefits at the time, Virginia’s firefighter cancer presumption law covered seven kinds of cancer and required the worker to have 12 years of full-time firefighting work, Whetzel said.

“We determined it was occupational cancer. But he had colon cancer, and that wasn’t cancer that was under the firefighter cancer laws,” Drenna Whetzel said.

Anthony Whetzel was a volunteer with Broadway Volunteer Fire Department for one year, according to Drenna Whetzel. Then, he was hired by Rockingham County Fire and Rescue and worked there for 11 years, racking up hundreds of fire runs over the years and potential exposure to carcinogens.

“With each of those, it could be any of the fires,” Drenna Whetzel said. “When houses burn down, all of the chemicals put together to build houses – people don’t realize how many environmental elements there are to just building a house.”

Since the first year was not full-time, he could not qualify for benefits under Virginia’s firefighter cancer presumption law.

Additionally, colon cancer was not one of the forms of cancer covered under the laws in Virginia, Whetzel said.

By the time Anthony Whetzel died, at almost 34 years of age, in September 2018, Drenna Whetzel had said the family had accrued enormous costs for treatment, and Drenna Whetzel had been caring for both a newborn and her sick husband for months.

“He worried so much about whether the kids would be OK or I would be OK,” Drenna Whetzel said. “He didn’t want us to have to struggle with any of that.”

While it was too late for her family to receive benefits, Drenna Whetzel joined members of the IAFF at the Virginia General Assembly in 2019 and 2020, hoping for a change in the law so no other family would have to go through the same thing, she said.

In 2020, the General Assembly passed a law adding colon, testicular, and brain cancers to the list of presumed work-related illnesses for firefighters.

Harrisonburg Fire Department has a standard operating procedure that was put in place in April 2019, specifically for reducing the risk of cancer. Tobia said he is enthusiastic about adapting to new and changing information to reduce the risk of carcinogens exposure.

“If they go to a fire and their personal protective equipment gets contaminated during the fire, they can come back to the fire station, put their second set of gear in service while they are washing their first set of gear. They always have a clean set of gear to be able to change into,” Tobia said. “Huge deal.”

Additionally, members of HFD formed an HFD Cancer Workgroup. They presented a list of 20-plus potential recommendations to the department to continue improving its cancer risk-reduction efforts per the Firefighter Cancer Support Network.

Rockingham County Fire and Rescue has put many similar initiatives in place and works closely with local representatives of the American Cancer Society.

“We want to do what we can do to make people healthier so they can have a long career and a healthy retirement,” Holloway said.

This is a well-researched and VERY well-written article. It is worth entering a journo award effort. Kudos to the author. It is also heart-braking to hear such a story. How did we let insurance companies take over our health-care? Something needs to change.