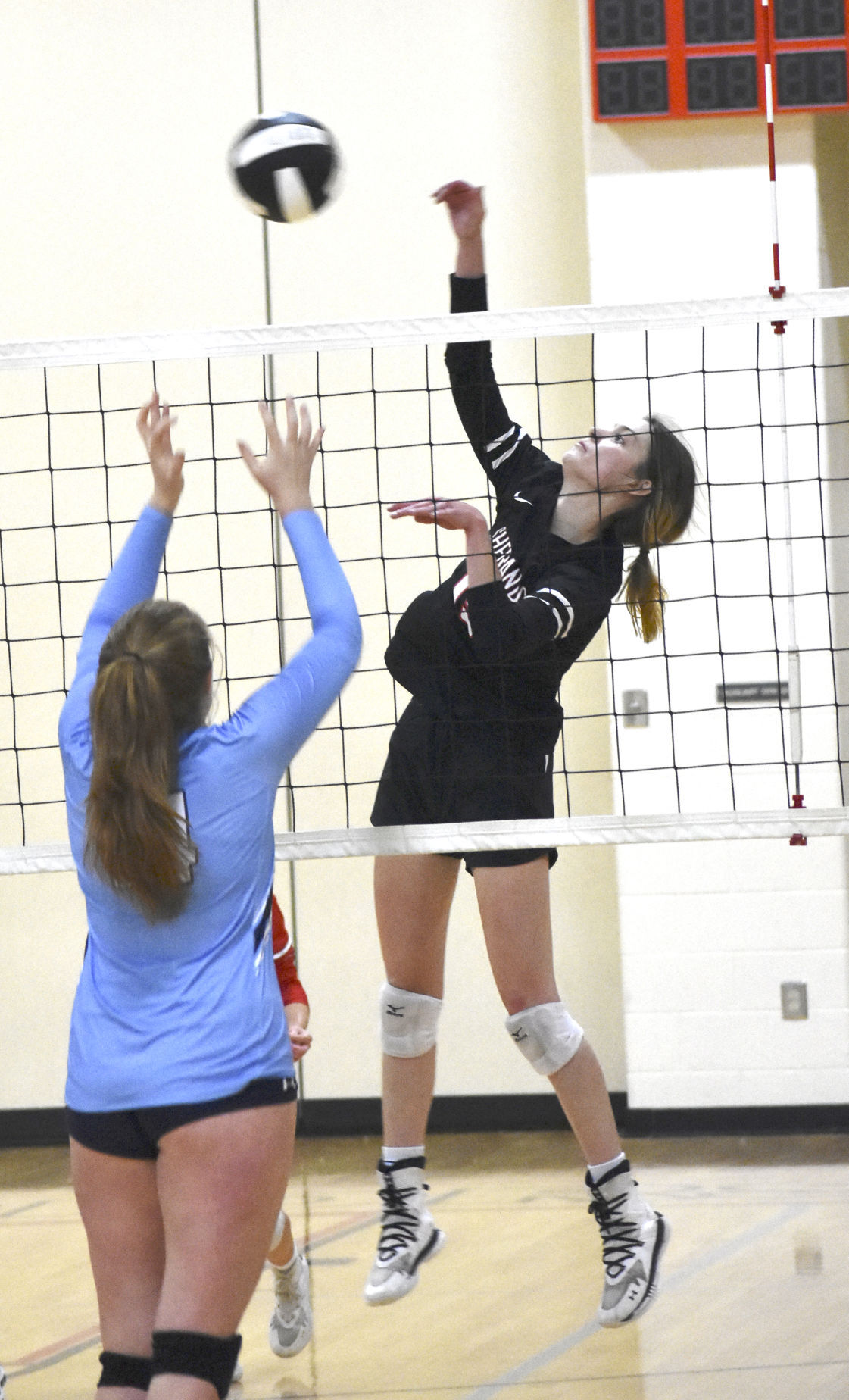 Sherando’s Regan Minney had a match-high 20 kills in Millbrook’s 3-1 win over the Warriors at Sherando on Tuesday. 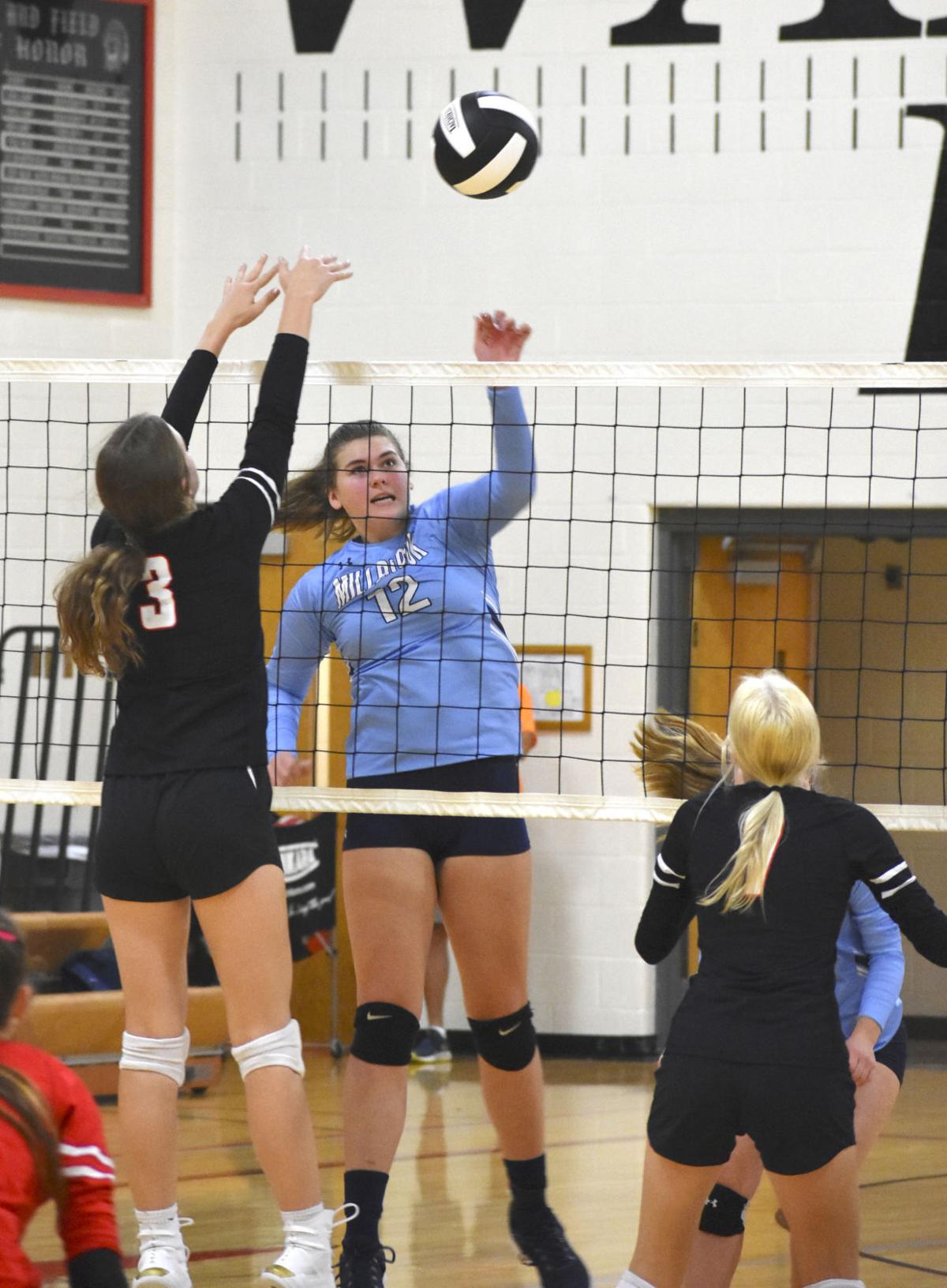 Millbrook’s Madison Koeller hits past Sherando’s Saige Garver in the first set of the Pioneers’ 3-1 win at Sherando on Tuesday. Koeller had 30 assists, seven kills, five blocks and four aces while Garver had nine kills and 12 aces.

Sherando’s Regan Minney had a match-high 20 kills in Millbrook’s 3-1 win over the Warriors at Sherando on Tuesday.

Millbrook’s Madison Koeller hits past Sherando’s Saige Garver in the first set of the Pioneers’ 3-1 win at Sherando on Tuesday. Koeller had 30 assists, seven kills, five blocks and four aces while Garver had nine kills and 12 aces.

STEPHENS CITY — After handling another strong challenge from a Frederick County rival on Tuesday night, the Millbrook volleyball team stands one win away from a Class 4 Northwestern District championship.

Frederick County teams James Wood and Sherando (11-6, 6-3) are the only district teams to take a set off Millbrook this year. The Pioneers needed five sets to beat the Colonels and Warriors in their first matchups against them, and Sherando had an excellent chance at sending Tuesday’s match to a fifth set with Saige Garver serving.

Earlier in the fourth set, Garver (nine kills, 12 aces) had a run of five straight aces, and her sixth ace of the set made it 23-23.

But after a timeout from Millbrook coach Carla Milton, Millbrook handled Garver’s next serve and assists by Madison Koeller on kills by Emily Orndorff and Madelyn White ended Sherando’s comeback hopes.

“When it comes down to it, we always band together,” said Orndorff, who had three kills and three blocks in the fourth set and six kills for the match. “We just put everything in the last few points. It was so exciting to beat them in four this time.”

The 5-foot-11 Koeller’s versatility played a big role for Millbrook down the stretch.

Koeller (30 assists, seven kills, four aces, five blocks) adjusted by using her left hand to knock down a kill on a pass near the net to make it 17-16 Millbrook. She rose up to win a 50-50 ball near the net and knocked it down for a kill to make it 18-17 Pioneers. She flicked a ball over from the floor with both of her hands after taking a pass for a kill to make it 21-19 Millbrook. She then teamed up with Orndorff on a block to make it 22-19 before setting up Orndorff and White (17 kills, 13 digs, four aces) on the two points that finished the match.

It was just another night of Koeller doing whatever she can to work with her teammates to come out on top, which has happened almost every time the Pioneers have taken the floor this year.

“We always play as a team,” Koeller said. “I think that’s what really motivates us. We’re playing for each other.”

It wasn’t Millbrook’s steadiest performance of the year. Sherando rallied from a 17-5 deficit in the first set to close to 22-19. The Warriors also jumped out to a 6-1 lead in the second set and an 8-2 lead in the third set before going back-and-forth with Millbrook in the fourth set.

“[Sherando] played well in all aspects of their game,” Millbrook coach Carla Milton said. “We were the ones making fundamental mistakes that were taking us out of the game, which we need to improve on before Thursday gets here. We’ve basically got to pick our game up. But we made some plays when we needed to, and that helped us win the match.”

The Pioneers were also led by Autumn Stroop (12 digs), Ariel Helmick (six kills, eight digs) and Taylor Weiss. A sophomore, Weiss played in her second match since being promoted to the varsity following an injury to opposite Amanda Dalton and contributed six kills.

Sherando was pleased with how it battled back after hurting itself with eight service errors in the first two sets.

Led by an outstanding hitting night from Regan Minney (20 kills), the Warriors again showed that they’ll be tough for anyone to handle in the district tournament.

“The last couple of sets, we fought as hard as we could,” Minney said.

“I think we definitely could have come out stronger the first two sets, but I think we really picked it up and started playing them in the second two,” Garver said. “I think our passing got better, and we were picking up more tips and blocks and stuff like that. We were starting to gel more.

“I think we’re gelling as the season goes on and playing better and better each game.”

Sherando coach James Minney liked what he saw from his team, which next hosts Handley on Thursday.

“The first set, they had us under control, but after that we started finding openings [in Millbrook’s defense],” James Minney said. “I just keep telling them, ‘Stay competitive. Stay competitive. If you lose, you lose, but stay competitive.’ At least, when [the opponent] walks off the court, they know they’ve had a match.

“I feel like that’s what happened tonight. We didn’t win, but we stayed with them. I thought we did really well, and it gives you something to look forward to in the [district] tournament if you have to play them again.”