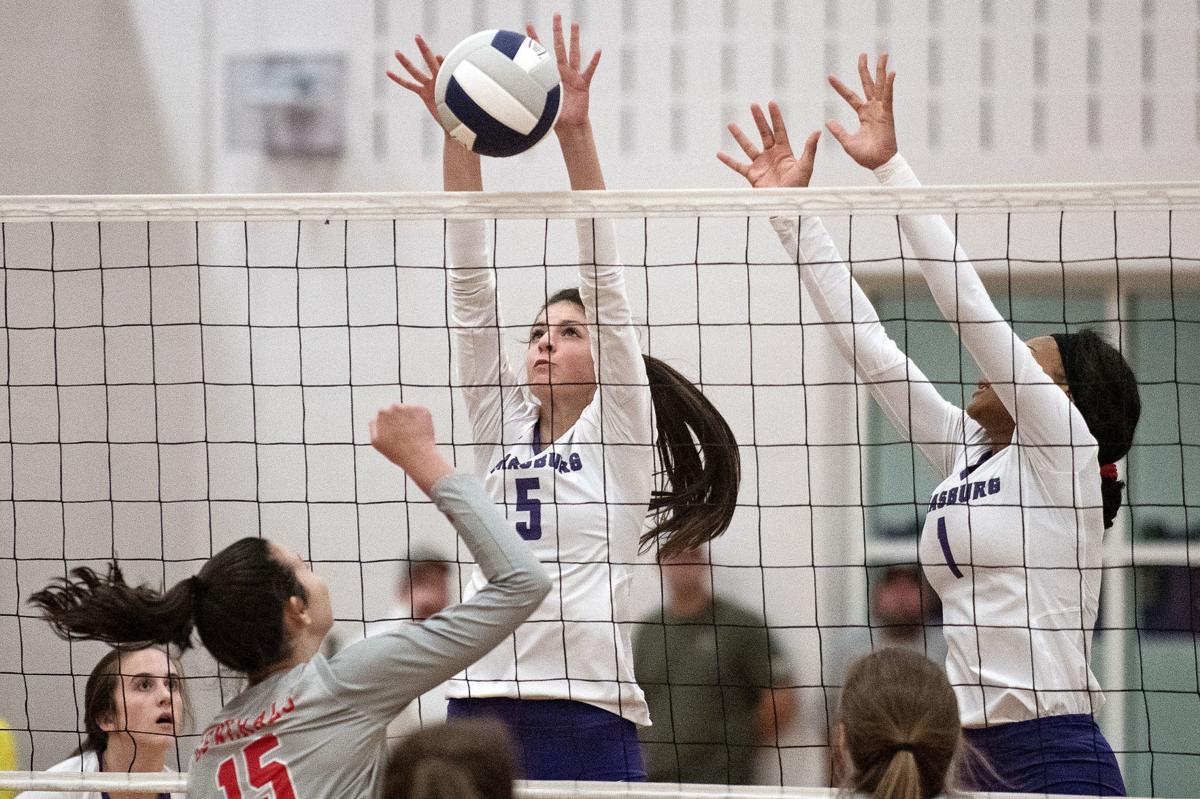 Strasburg’s Kenley Smith and Kyierra Ashby go up to block a hit by Stonewall’s Lilly Blank during volleyball action Thursday night in Strasburg. 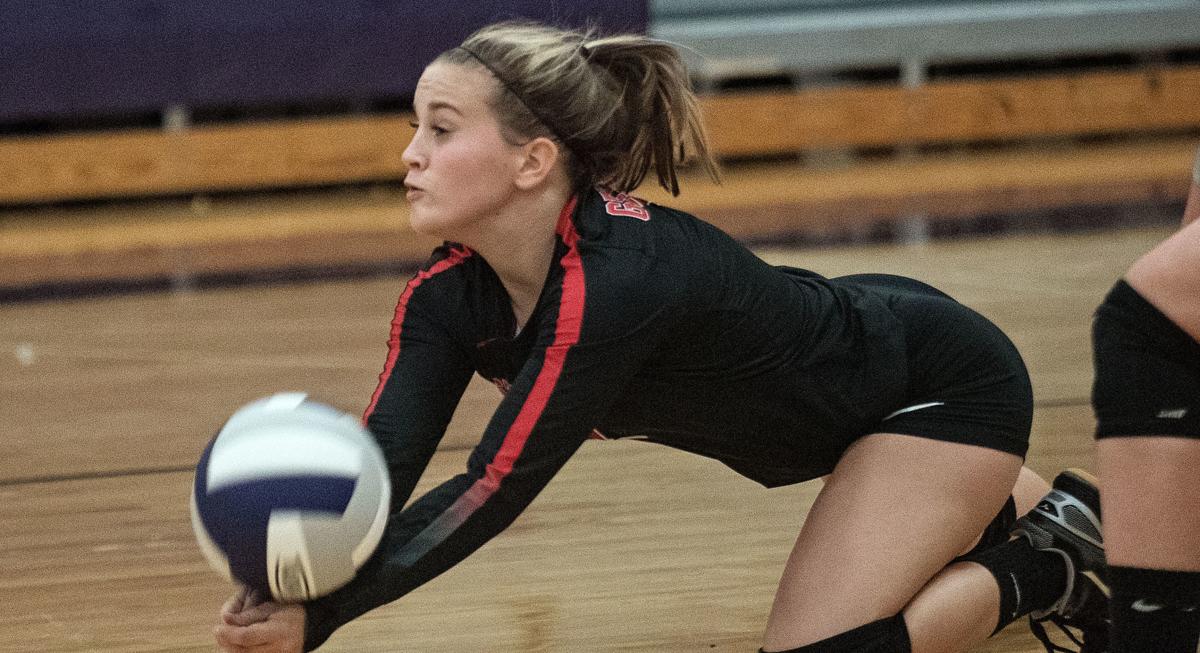 Stonewall’s Kylene Franklin hits the floor as she digs the ball. 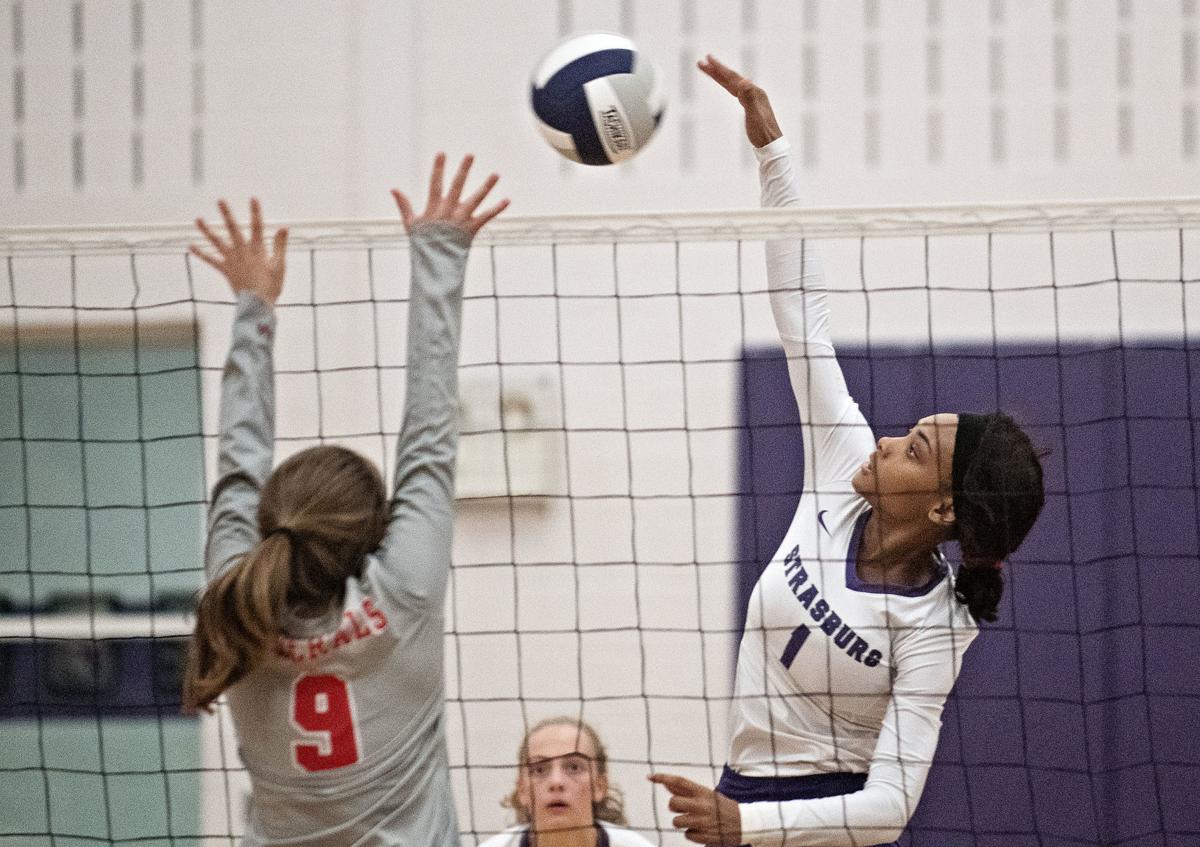 Strasburg’s Kyierra Ashby goes up for a kill over Stonewall’s Alexis Franklin. 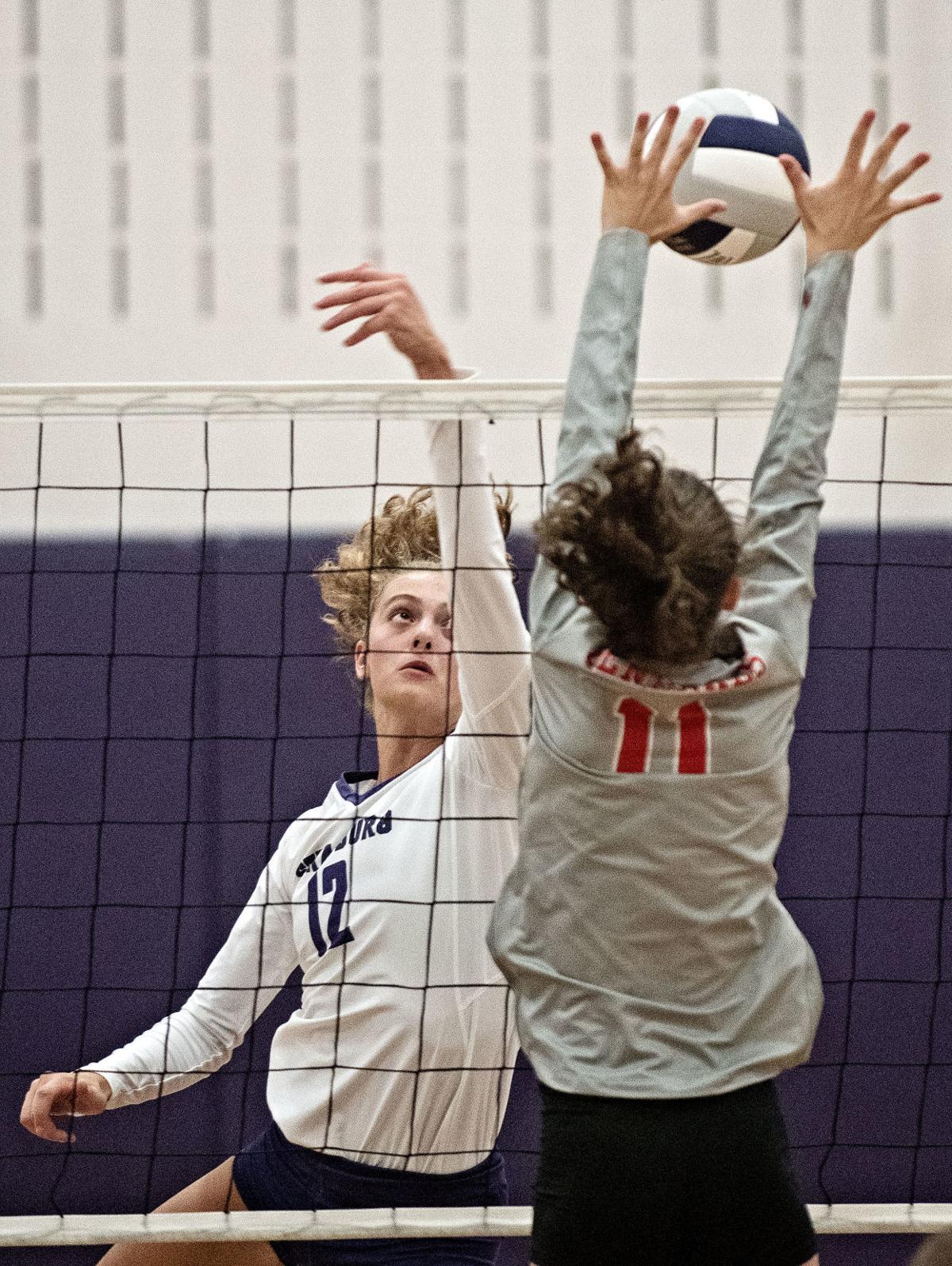 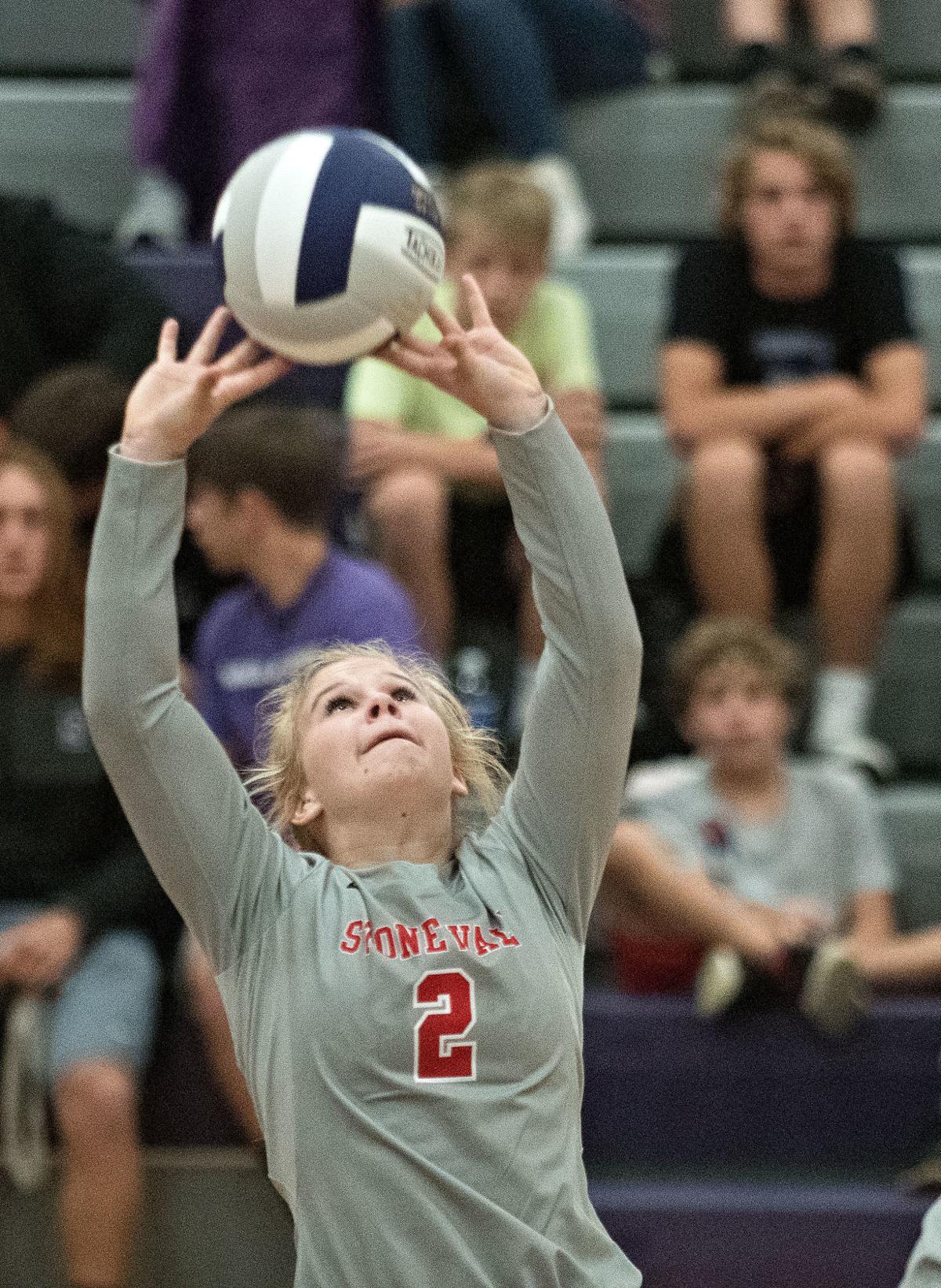 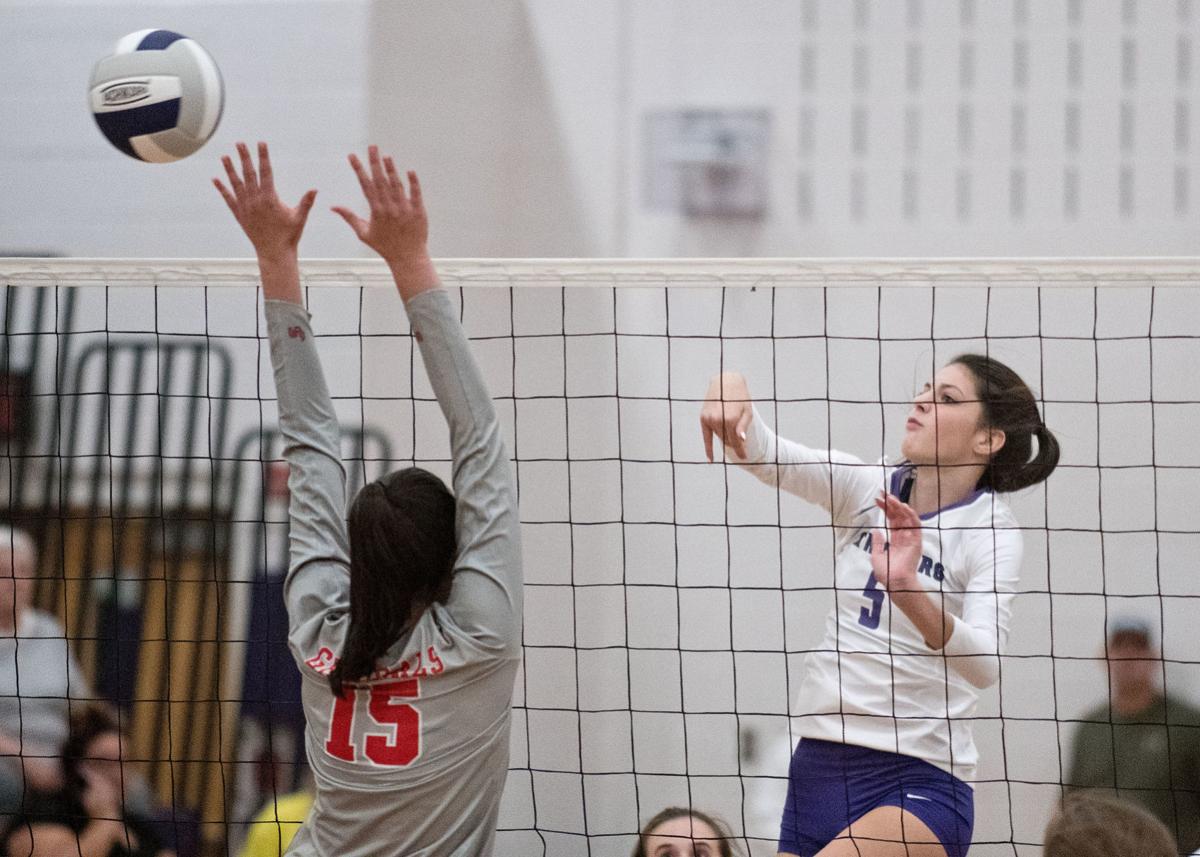 Strasburg’s Kenley Smith goes up for a kill over Stonewall’s Lilly Blank. 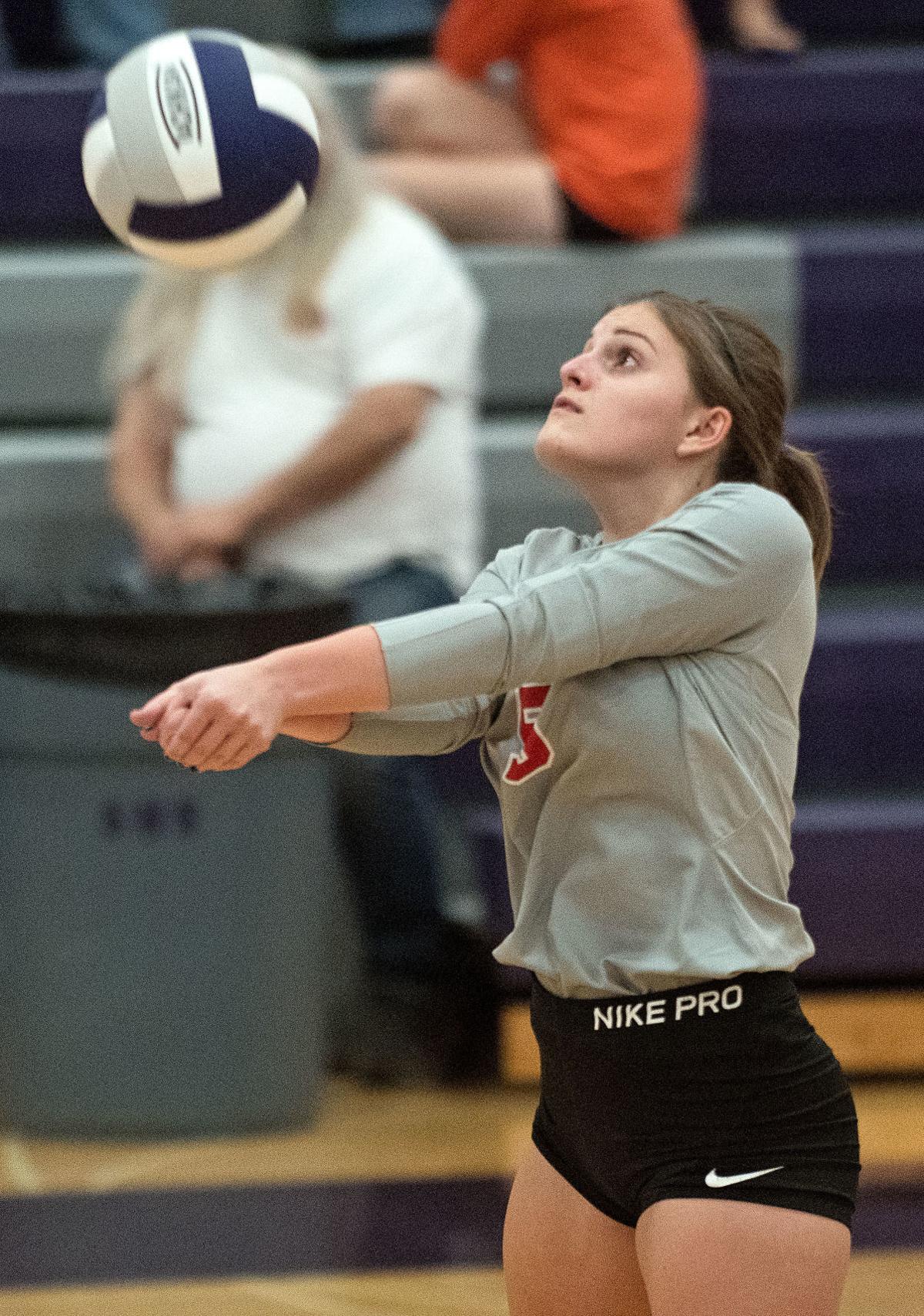 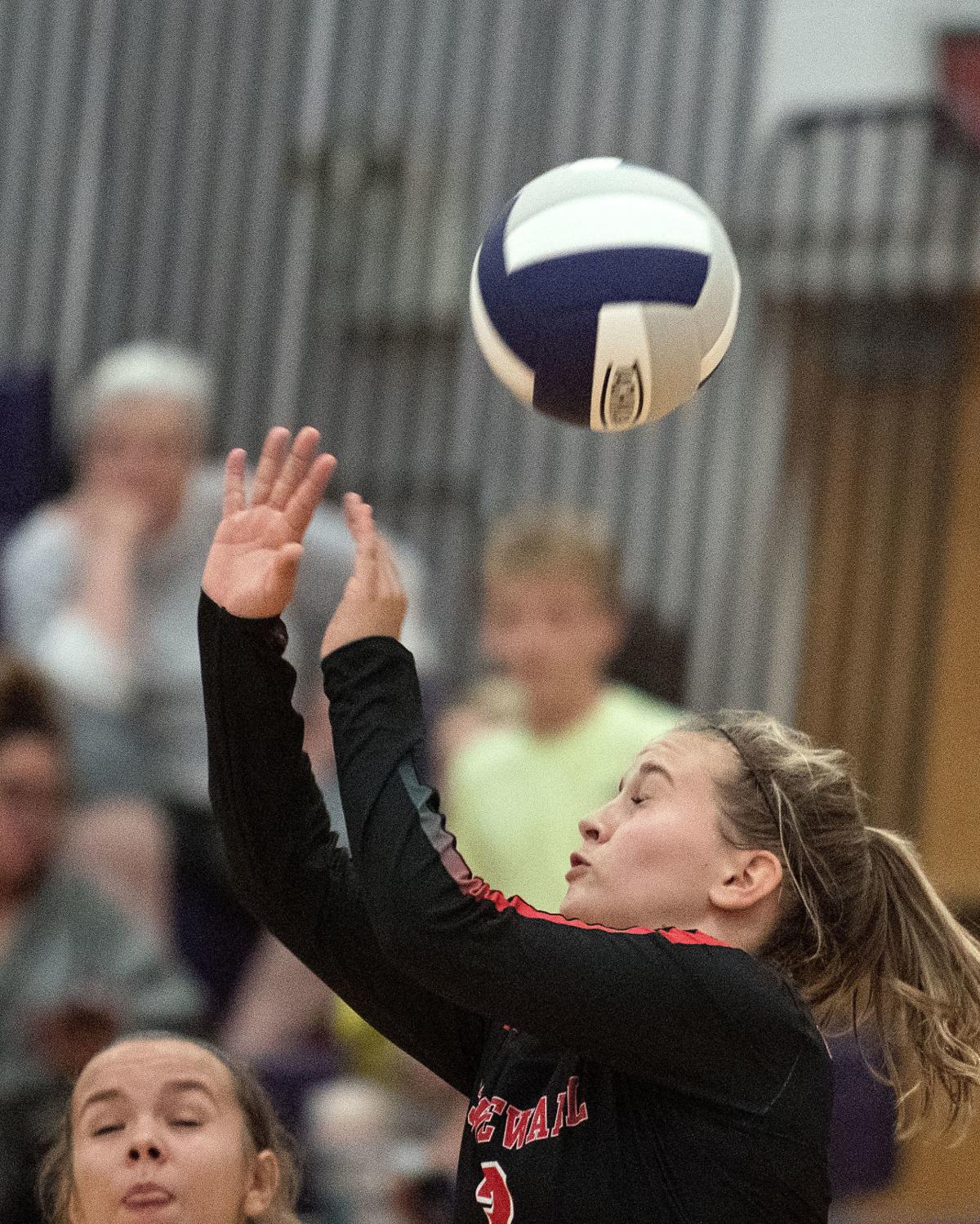 Stonewall’s Kylene Franklin has a kill shot fly over her head. 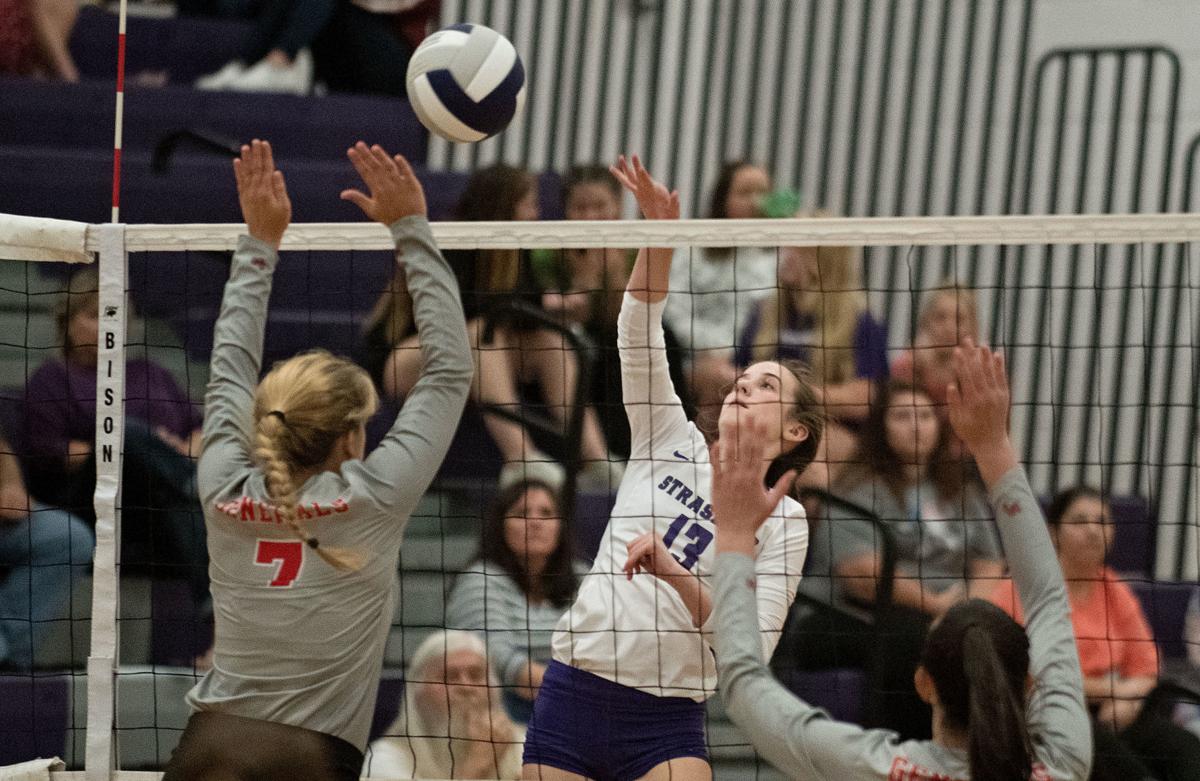 Strasburg’s Gracie Hart goes up for a kill over Stonewall’s Alicia Bare.

Strasburg’s Kenley Smith and Kyierra Ashby go up to block a hit by Stonewall’s Lilly Blank during volleyball action Thursday night in Strasburg.

Stonewall’s Kylene Franklin hits the floor as she digs the ball.

Strasburg’s Kyierra Ashby goes up for a kill over Stonewall’s Alexis Franklin.

Strasburg’s Kenley Smith goes up for a kill over Stonewall’s Lilly Blank.

Stonewall’s Kylene Franklin has a kill shot fly over her head.

Strasburg’s Gracie Hart goes up for a kill over Stonewall’s Alicia Bare.

STRASBURG – Maybe it was the two losses they suffered earlier in the week. Maybe it was playing their Shenandoah County rival. Whatever the reason, Strasburg found plenty of motivation and energy on Thursday night.

“I thought this was very good for us,” Strasburg senior hitter Lauren Nofsinger said. “We needed this win. We had our energy up, everyone did good. The people that went in stepped up. I thought we did good.”

The Rams beat Bull Run District rival Rappahannock County in five thrilling sets last week and Nofsinger said she thought the team was still on a high going into this week and wasn’t focused early in the week like they needed to be.

Strasburg coach Suzanne Mathias-Carter said the team was flat and lacked energy in those two losses but they brought the energy against the Generals on Thursday.

“I felt like we did all the little things and went back to playing as a team,” Mathias-Carter said. “We’ve kind of struggled the last two matches with that and on focusing on team as a whole and doing the little things like covering and defensively. We just kind of talked beforehand to concentrate on that. And I thought they stepped up and did good and stayed consistent throughout.”

The Rams (6-3, 2-1 Bull Run) came out strong in the first set as Nofsinger and sophomore hitter Kenley Smith combined for six kills as Strasburg took a 13-7 lead.

The Generals (0-7, 0-3 Bull Run) closed the gap to 13-10 on an ace by Stonewall Jackson junior libero Kylene Franklin but that’s as close as they would get the rest of the set.

Strasburg jumped out to an early 10-4 edge again in the second set aided by kills from four different players.

Strasburg senior setter Delainey Stickley said that having the hitting depth the Rams have makes her job easier.

“I think really when I’m setting it’s not a hard choice,” Stickley said. “Because I know that all three hitters at the net, I can set to any one of them and any one of them can get a kill. All of our hitters are very, very powerful.”

The Generals were able to cut the lead to 16-14 in the second set, aided by a kill from Stonewall Jackson junior hitter Lilly Proctor and an ace by Franklin.

The Rams used an 8-2 run to pull away for good, led by an ace each from Stickley and Strasburg senior Gracie McDonald and a block by Nofsinger.

The Rams raced out to a 7-2 lead in the third set and eventually extended the advantage to 20-7 before the Generals made one final run.

Stickley said the team wasn’t talking and covering for each other during their two losses, but that was much better against the Generals.

“I just felt like we played really well as a team,” she said. “And we finally came together as a team. And we know we can beat anyone that we come across as long as we talk.”

The Generals have a young squad with four freshmen, three of them starting. They are still searching for their first win of the season, but Stonewall Jackson coach Lindsey Dinges said that she’s seen a lot of improvements in her young squad.

Defense is the strength of the Generals’ squad. Dinges said they have more experienced players on defense and it’s taking time for her young hitters to get adjusted to the varsity level.

Proctor had three kills and Blank had one kill and two blocks to lead the Generals.

The Generals host Clarke County on Tuesday. Dinges said she’s hopeful as her young team gains experience the wins will start to come.

“We’re going to keep working,” Dinges said. “Because we’ve had good nights and we’ve had rough nights but each week they come back and they’re ready to go; they’re ready to work. I’ve got 12 really good girls who I am proud of. That didn’t go our way but they showed me more things that we can improve upon and hopefully have some better outcomes in the future.”

The Rams were led by Nofsinger with 13 kills and two blocks and Smith with six kills and one block. Stickley added 13 assists and one kill and senior setter Balyee Hodson had five assists.

Strasburg plays at Bull Run District rivals Madison County and Clarke County next week. The Rams know it’s important to stay focused as they head into next week.

“I hope this win keeps us going,” Nofsinger said. “Since we beat them in three, hopefully everyone realizes that we can do this to everyone else and we can just keep this momentum going.”