Sally Cowal, co-owner of Muse Vineyards, walks along a row of grape vines with her dog Emma on the lower part of the vineyard she and her husband Robert Muse operate off South Hollingsworth Road in Woodstock. Cowal, a former United States ambassador, is now senior vice president of Global Cancer Control at the American Cancer Society. Robert Muse is an international attorney. The couple grow 20 varieties of grapes on 35 acres. 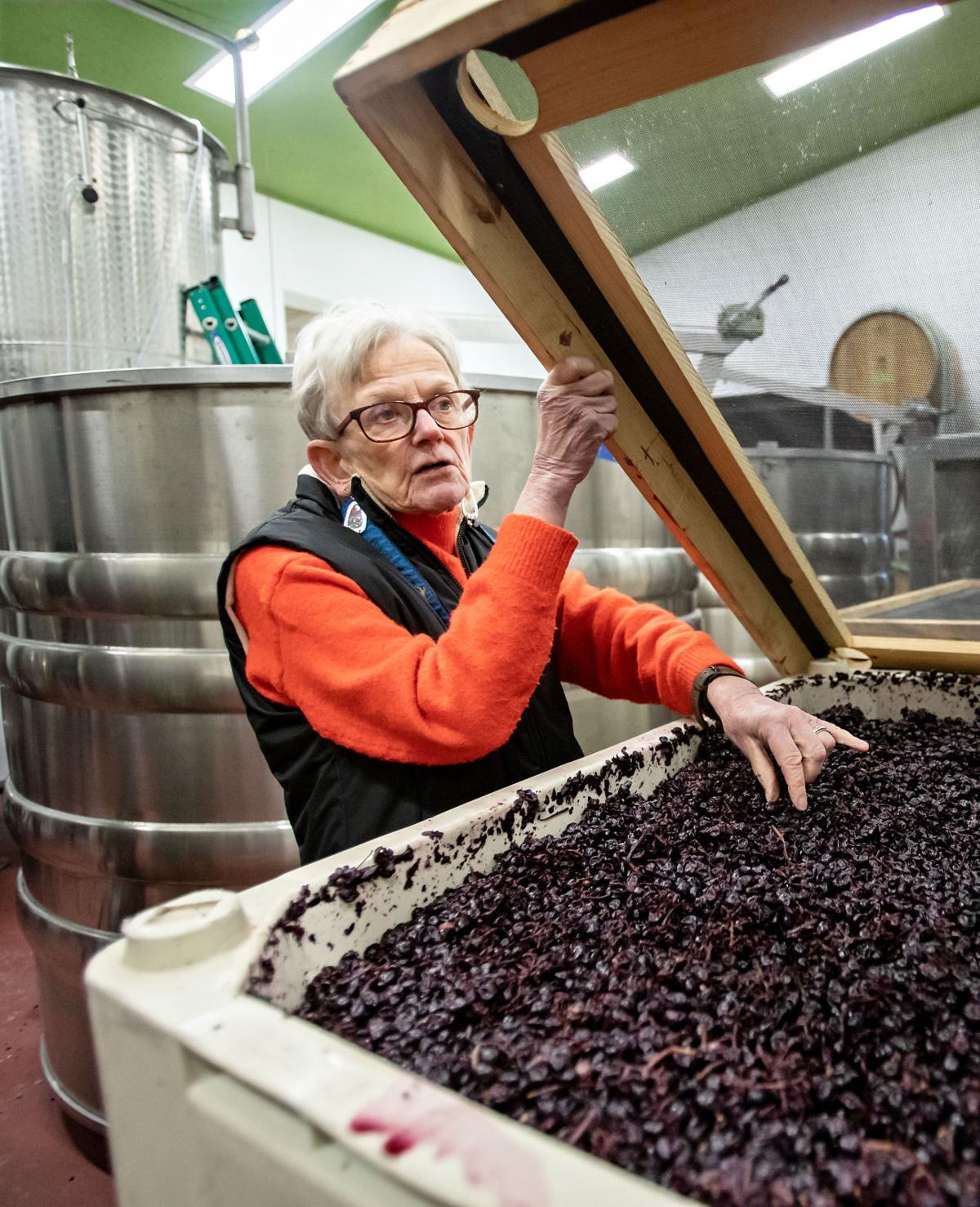 Sally Cowal checks on grapes that have been fermenting for over 10 days in the winery. Those grapes will be bottled into wine in 2024. 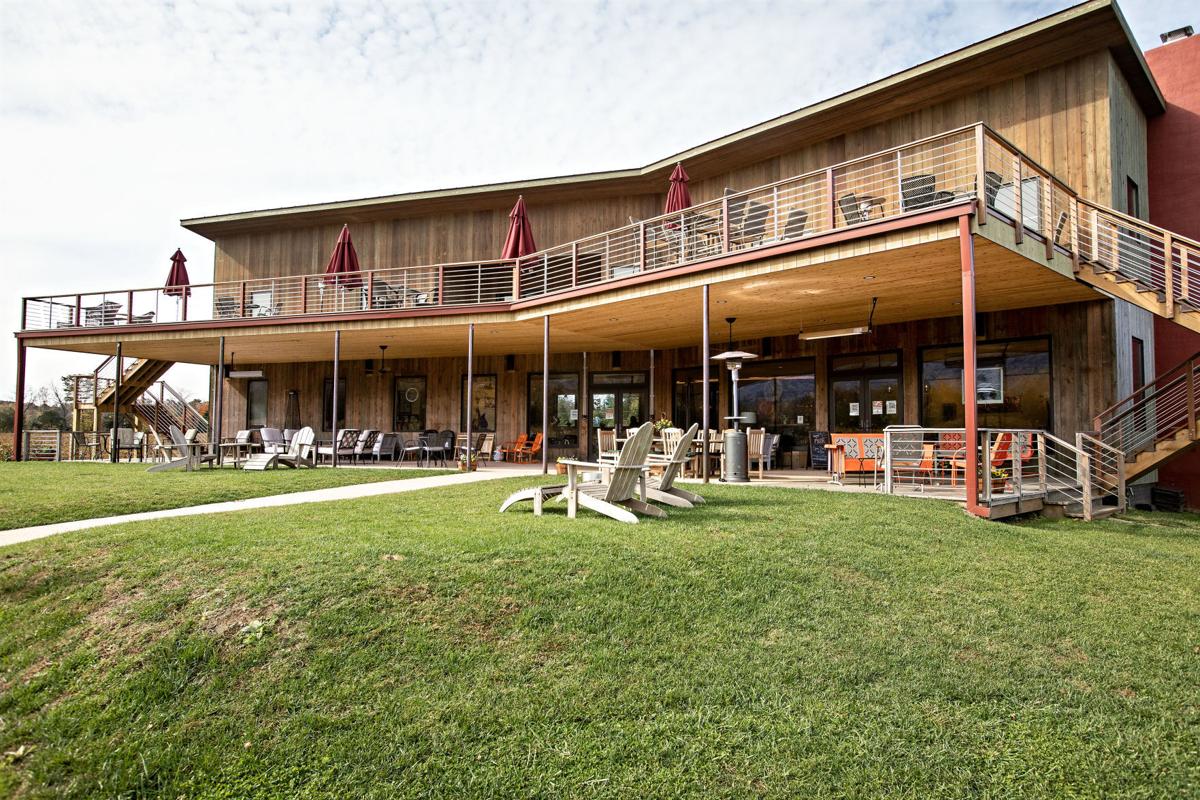 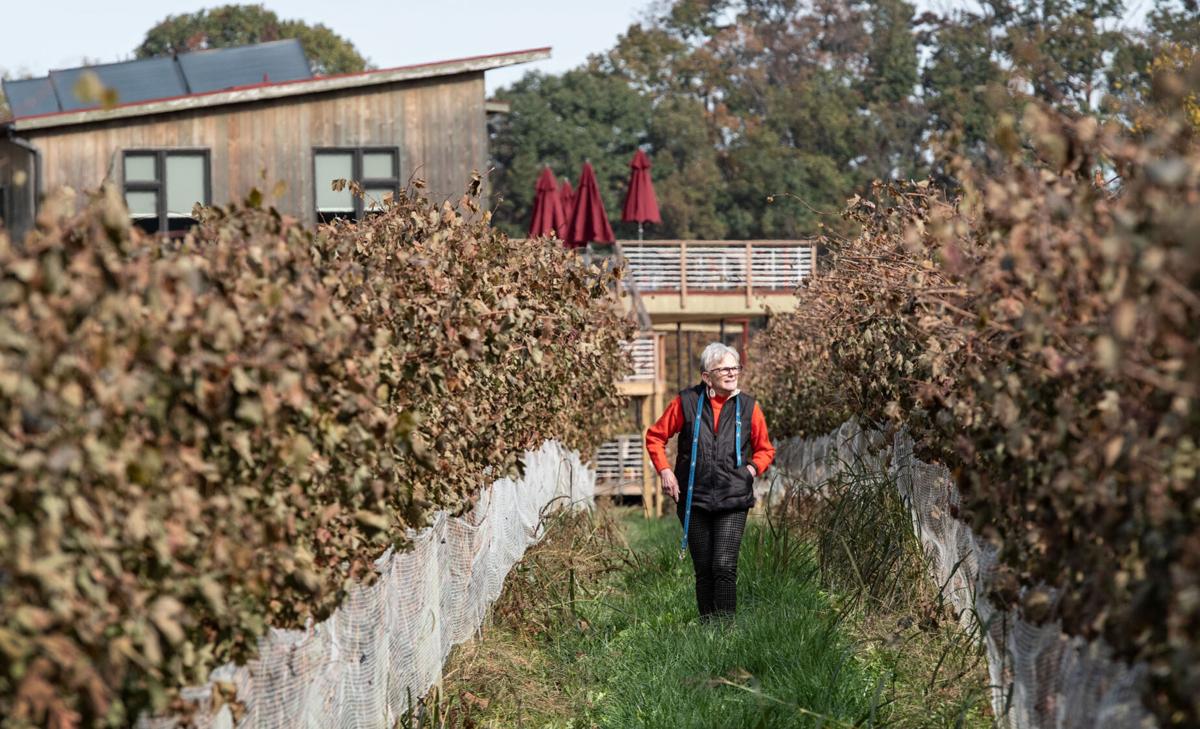 Sally Cowal, co-owner of Muse Vineyards, walks along a row of grape vines outside the tasting room of the vineyard. 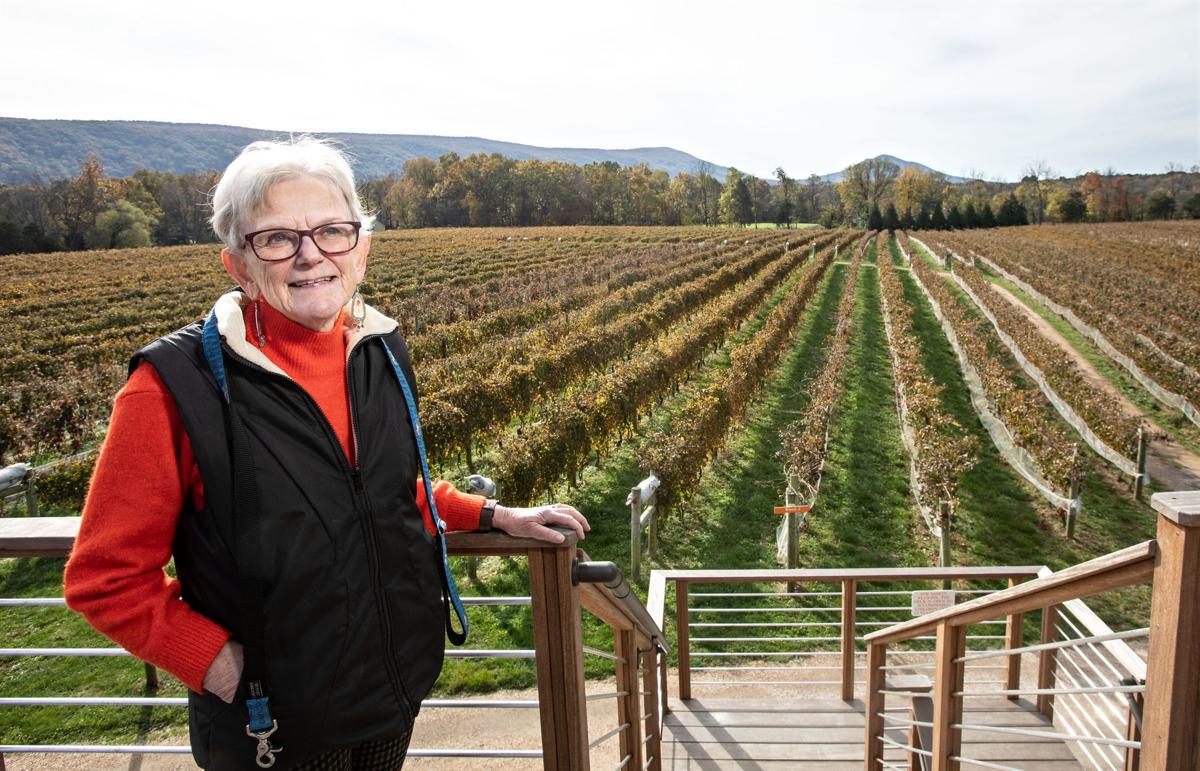 Sally Cowal, co-owner of Muse Vineyards, stands along the second story deck of their tasting room located off South Hollingsworth Road in Woodstock.

Sally Cowal, co-owner of Muse Vineyards, walks along a row of grape vines with her dog Emma on the lower part of the vineyard she and her husband Robert Muse operate off South Hollingsworth Road in Woodstock. Cowal, a former United States ambassador, is now senior vice president of Global Cancer Control at the American Cancer Society. Robert Muse is an international attorney. The couple grow 20 varieties of grapes on 35 acres.

Sally Cowal checks on grapes that have been fermenting for over 10 days in the winery. Those grapes will be bottled into wine in 2024.

Sally Cowal, co-owner of Muse Vineyards, walks along a row of grape vines outside the tasting room of the vineyard.

Sally Cowal, co-owner of Muse Vineyards, stands along the second story deck of their tasting room located off South Hollingsworth Road in Woodstock.

WOODSTOCK — Nestled on the banks of the North Fork Shenandoah River at the foothills of the Massanutten Mountain range rests Muse Vineyards.

The 40-acre vineyard might be tucked among the hills and valleys in Shenandoah County, but co-owner Sally Cowal said she believes the community is making her vineyard one of the best around.

“People who live local never want to believe they don’t live somewhere that’s beautiful or meaningful,” Cowal said during a late-morning stroll through the vineyards on Thursday. “So when they have visitors, they can bring them here and say, ‘Look, we have something beautiful, too.’ People feel like this place belongs to them and it’s a sense of pride for them. That makes me proud.”

A 2015 Governor’s Cup winner, Muse Vineyards started as a hobby for Cowal and her husband, Robert Muse.

Cowal, 77, said that she didn’t grow up in a wine-loving family, but that she was introduced to it while working as a United States ambassador after college. She said she very much enjoyed traveling and trying new wines over business lunches and dinners, learning along the way what each new place had to offer that was either different or similar to the last place she’d been. She kept that love for the drink even after she took her job as the Senior Vice President of Global Control at the American Cancer Society.

After Cowal met Muse, who grew up as a cattle farmer in Arizona and later became an international attorney, the two settled in Washington, D.C.

“We were living in Washington, D.C., and we were looking for a weekend place,” Cowal said. “We took our compass and said, ‘What’s within 100 miles of D.C.?’ This place popped up, of course.”

Cowal said the couple liked Shenandoah County because of its beauty, affordability and that it was close enough to get to big cities if she decided she wanted to go somewhere else on a whim.

The couple first bought a small, A-frame home in 2003 on the other side of a row of trees near the present-day vineyard. There were a couple hundred grape vines there, so that drew their interest.

Those vines were where Cowal and Muse built their future.

When the 40 acres adjacent to their property came on the market, they bought it. The property was a 200-year-old Mennonite soy bean farm. Cowal said the plan was immediately to begin growing grapes there.

“We knew this would be a place where we could expand,” she said. “The first year we had the property, we planted a few acres. Now, we have a main vineyard, two lower vineyards, a little vineyard and an upper vineyard.”

The vineyards sit at an elevation of 1,000 feet and the soil consists of shale and rocky red clay. The top vineyard sits on a terrace formed millions of years ago by the Shenandoah River that today flows 100 feet below the surface. The soil is a loose loam formed from crystalline rock, and red gravelly clay begins at a depth of about 3 feet. Gentle inclines combine with the rocky soil to ensure good drainage.

The vineyard next to the tasting room, where Cabernet Sauvignon and some white varieties are grown, plunges down a steep shale outcropping.

The lower vineyard is on the river’s bank and consists of silt loam alluvium formed from sandstone and shale.

The expanded vineyard give way to 35 acres of vines that hold more than 70,000 actual plants that produce 85 tons of fruit, which leads to about 5,500 cases of wine a year.

A permanent crew of three people maintain all of the vines throughout the year with other workers and volunteers coming in to help with harvest, which usually begins around August 20 and lasts about two months.

There really isn't a time when the vineyard isn’t busy. Some people only think it’s busy during harvest time, but that’s not the case.

For example, now that harvest is over, the netting that’s used to keep birds out of the plants needs to be tended to, pruning needs to be done and the base of the vines need tending.

Birds, deer, raccoons and bear are the main pests that they have to account for when tending the fields.

The first grapes planted in the new space wound up creating Muse Vineyards’ Clio, a Bordeaux-style blend. The 2009 Clio, the first win ever produced at Muse, won the Governor’s Cup in 2015.

Muse has planted about 20 grape varieties.

“The varieties we’ve planted produce interesting wine: for instance, Sangiovese is the grape from which Tuscan wines are made, mid-weight with cherry notes; while the Nebbiolo grape produces the complex wines of Italy’s Piedmont region,” Muse said. “We use those grapes and others to produce bold reds that are refreshing, food complimentary wines.”

Cowal said she didn't think the initial project would get this big.

“This whole thing is a culmination of my husband wanting to try this grape and that grape,” she said with a laugh, looking out from the upper deck of her tasting room across the main vineyard. “Now, I think we’ve run out space, so I’m happy about that. We’re bigger than I thought we would be, but we’re in great shape.”

Cowal has become well known for her willingness to share her love for Shenandoah County since coming to the area in 2003. She said though she’s been all over the world, she feels at home among the hills, valleys, river and mountains.

She said that a sense of curiosity has always led her ambassador sprit, whether that meant for her actual job or whichever new place she was living.

“Because I’ve lived in six or eight different countries and was always traveling for business, I always want to know what the community is about,” she said. “What are its problems, its strengths and is there anything that I can do to make that little part of the world a better place.”

She brought that with her to Shenandoah County and has given the community a space for people to be themselves and an area to be proud of, she said.

“I really love that excellence draws. I think we’re excellent, and we’ve brought people from all over the world in here. They interact here with people from Shenandoah County, some of which have rarely been out of Shenandoah County. We have people of different backgrounds and this is a comfortable place for them all to meet. There’s something going on here that is quite special,” she said. “I want people to enjoy the space, but we’re very conscious about making good wine. If we just wanted people to enjoy it, we’d buy wine and sell it here. We really want to show what’s possible for viticulture in the state of Virginia.”

Cowal said she never knows how many people will come through the vineyards on any given day. But what she said she does know is that in between any hustle and bustle or whichever season the vineyards are going through, she can sit up on her deck, look out across the fields as the sun sets over the mountains and know that she’s where she needs to be.

“I can’t think of a more beautiful place,” she said. “I really cannot.”