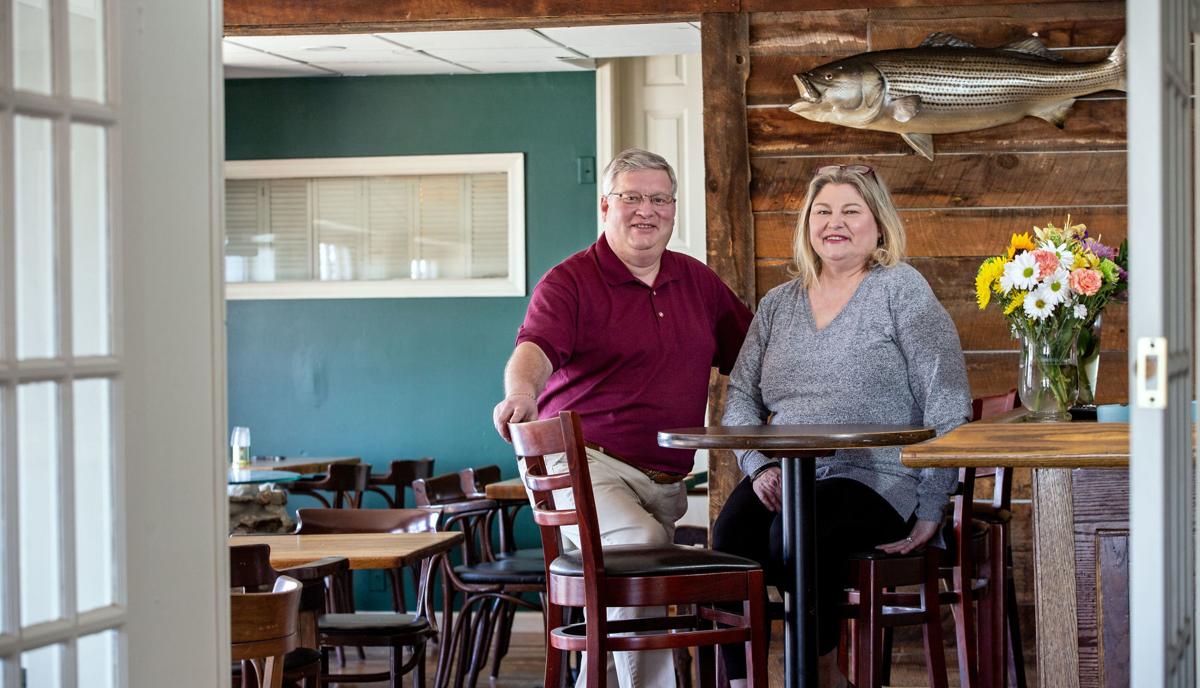 Rich and Angie Orndorff sit inside the Hunt Room at the Wayside Inn in Middletown. They are leasing the property that was recently sold to HGH Finnigan Resources LLC for $650,000. 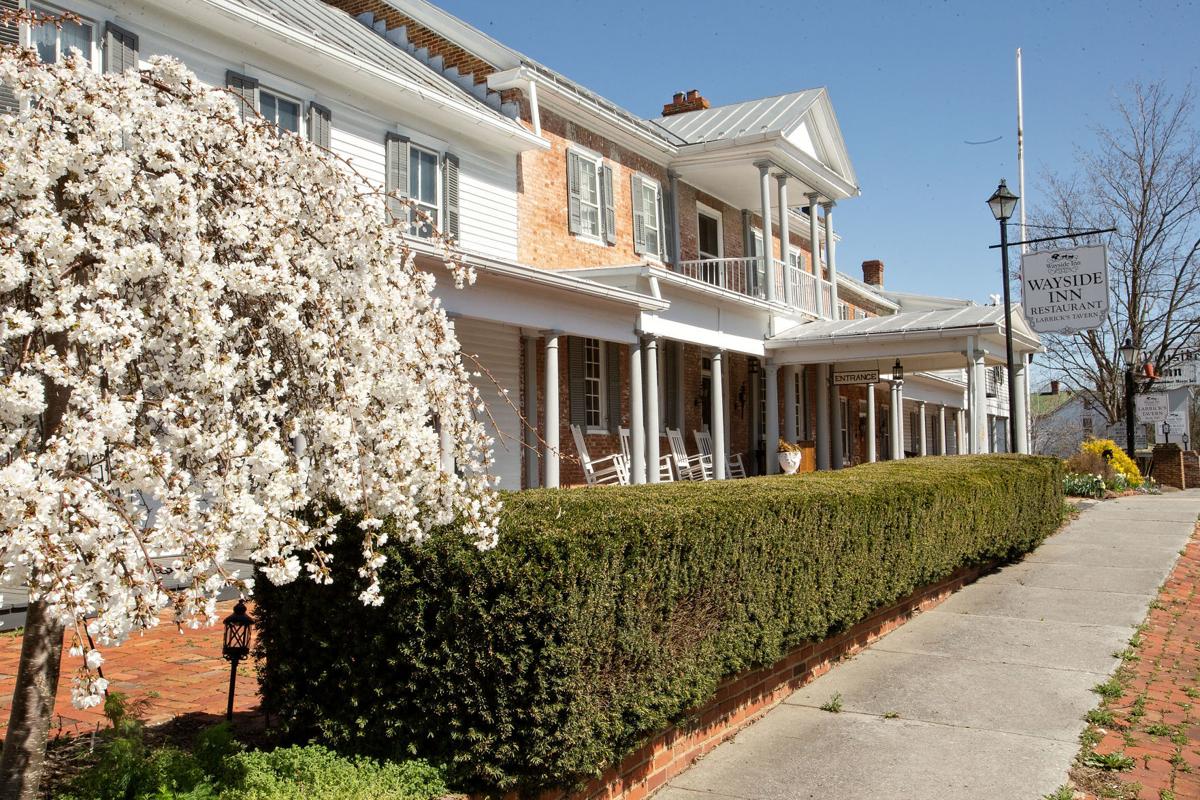 Rich and Angie Orndorff sit inside the Hunt Room at the Wayside Inn in Middletown. They are leasing the property that was recently sold to HGH Finnigan Resources LLC for $650,000.

MIDDLETOWN — Hoping to build on tradition and history, Rich and Angie Orndorff see their opportunity at taking over the Wayside Inn as a strong move.

The Orndorffs are leasing the inn at 7783 Main St. in Middletown and plan to return it to being one of the valley’s destination locations. The couple reopened the inn almost two weeks ago.

“Our idea is to take it back to what it once was. Years ago, this was the premier wedding venue. We feel like with the history and where we’re located in the valley that this is a good wedding venue,” said Rich Orndorff, the former mayor of Strasburg. “We don’t want to pigeonhole ourselves into any one area, though. Graduations, holiday parties, birthdays, retreats, meetings — all those are possible here.”

George and Becky Reeves, who owned Wayside Inn for the last seven years, sold the inn to HGH Finnigan Resources LLC for $650,000 in late December. The ownership group consists of three buyers — John and Bob Hotaling and Jeff Gabrelcik.

“They had a love for the inn, very similar to Angie and I,” Rich Orndorff said of the owners. “They wanted to preserve the legacy. They want to see it flourish, and they want to see it grow. We want to make this a destination location once again. We want weddings and events here.”

Rich Orndorff said the owners are hands-off but are supportive with “energy, resources and dollars” to upgrading the structure of the inn.

The inn, now known as Wayside Inn 1797, is run by the management team of Rich and Angie Orndorff, Executive Chef Travis Ross and bar manager Lance Jennette. The four have history, previously working together at the Hotel Strasburg.

“We sort of feel like we have the band back together with the four of us here,” Rich Orndorff said.

The Wayside Inn originally opened in 1797 as Wilkenson’s Tavern as a stagecoach stop — “a relay station where fresh horses were readied and bounce-weary passengers could rest and refresh themselves,” according to the Inn’s website.

In the 1960s, the Wayside Inn was acquired by banker and real estate developer Leo Bernstein, who revitalized the property that features 22 bedrooms, several dining halls and reading rooms, a large kitchen, outdoor seating, a tavern and more.

The inn’s Larrick’s Tavern is open Wednesday through Sunday, starting at 4 p.m. The management team is working to figure out exact closing hours.

Dining hasn’t expanded to the dining rooms due to COVID-19 restrictions, but it will be open as restrictions loosen. Customers can now order food from the tavern menu.

Guest rooms are open with reservations beginning in late April.

Overall changes under new ownership and management have mainly consisted of new paint and new flooring with some touch-ups on things such as dry wall. They are also bricking the sidewalk in front on the building. The Orndorffs said they’ve been trying to use as many local products and services as possible.

Much of the history of the inn will continue to be preserved and new ways to preserve the memories of those who have come before them have been established.

The management team has named the 22 guest rooms for previous owners, those who have been influential in the inn’s history, presidents who were from Virginia and for other local historic events and places.

The Hunt Room, which sits off from the tavern’s barroom, was repainted and had new floors put down. Rich Orndorff said they would also be adding TVs. The room extends out onto the deck outside.

The room can host live music and other events.

Outside the tavern, the previous 6-foot privacy fence was lowered and the plan is to make outdoor seating on both sides of the entrance out front.

The management team changed the front dining room to a “masculine lounge” and renamed it Leo’s Lounge, named after Bernstein.

The front desk area was moved back to where it was about 35 years ago, the same room that consists of the pigeon holes that sent messages to guests’ rooms.

The previous room that housed the front desk has been made into Maggie’s Parlor, named after previous owner Maggie Rhodes, who named the inn.

The Orndorffs discovered an old bar set up near the Senseny Ballroom that would allow guests to offer a bar service during events held in the ballroom. The ballroom can be used for a multitude of events, and the capacity — under normal circumstances — will depend on the seating type requested.

In the ballroom, they’ve added LED lighting, painted the entire room, fixed some floorboards and made some touch-ups here and there.

The Orndorffs said they first met at the Wayside Inn while Angie Orndorff had been working there, and Rich Orndorff said he’d spent a lot of time with Bernstein, a successful banker.

The history that the inn provides not only to their relationship but to the area was the most intriguing aspect of taking on the new endeavor, the couple said.

The hope is to restore the inn to prominence while being a vital part of the Middletown community, they said.

“We want to be part of the community. We’re all about small towns,” Rich Orndorff said. “With Wayside Inn being at almost the center of town and being the oldest continuously operating inn in America, that says something and it says something about the town of Middletown.”