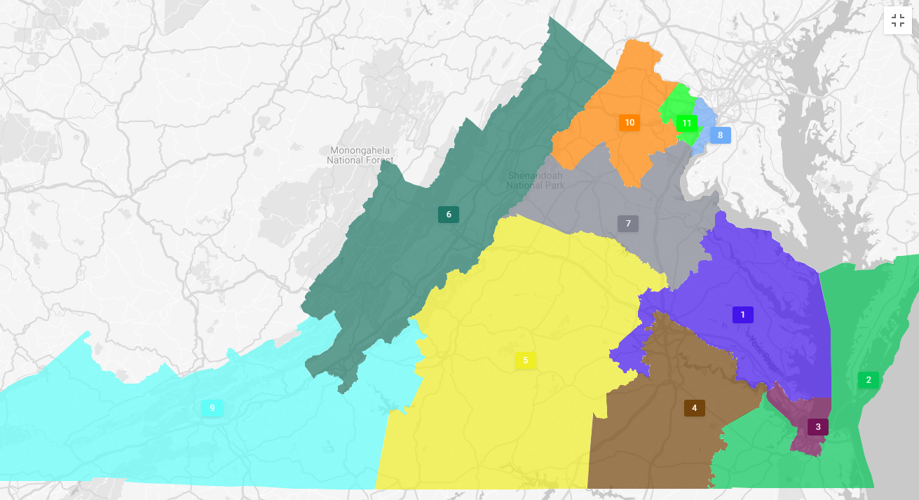 The new Sixth Congressional District includes a majority of the Interstate 81 corridor in the western part of the state, from Winchester to Roanoke. 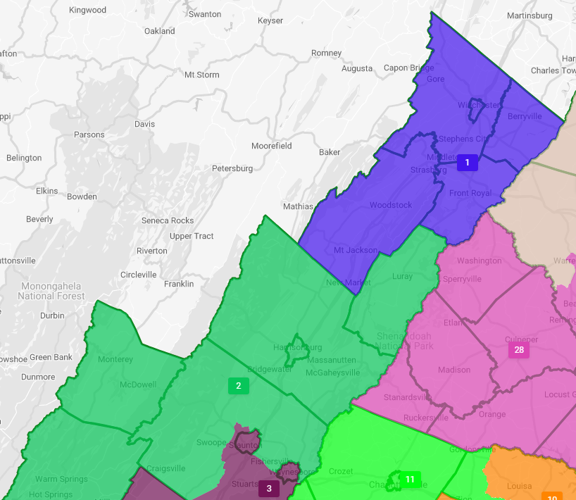 The Winchester area will be in the state Senate's new 1st District, shown in blue. 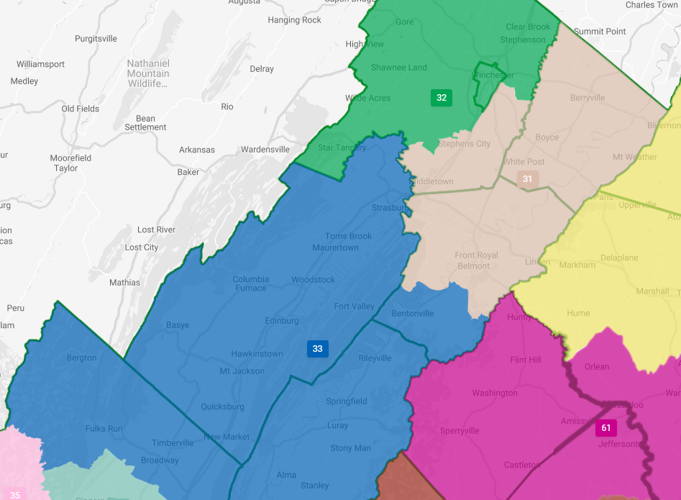 The new House of Delegates voting districts in the Northern Shenandoah Valley.

The new Sixth Congressional District includes a majority of the Interstate 81 corridor in the western part of the state, from Winchester to Roanoke.

The Winchester area will be in the state Senate's new 1st District, shown in blue.

The new House of Delegates voting districts in the Northern Shenandoah Valley.

Northern Shenandoah Valley residents will now have one voice speaking for them in Congress as the result of new redistricting maps approved by the Supreme Court of Virginia on Tuesday that redraw the boundary lines for the U.S. Congress and both house of the General Assembly.

This November, residents along the Interstate 81 corridor will vote as members of the newly redrawn 6th Congressional District, which will now include Frederick and Clarke counties and extend as far south as Roanoke.

Frederick and Clarke counties have been represented by Democratic Rep. Jennifer Wexton of the 10th District, a district that extended as far east as Fairfax County. Wexton's district will now represent localities south of Loudoun and Fairfax counties rather than extending to the West Virginia border.

Localities south of Frederick County along I-81 have been represented by Republican Ben Cline of the 6th District. Cline plans to run again for his seat and faces opposition from Democratic candidate Jennifer Lewis, of Waynesboro.

The Supreme Court of Virginia unanimously approved the map changes as part of a redistricting process that accounts for population shifts every 10 years.

The maps were drawn by two court appointed “special masters,” one chosen by the Republican Party and one by the Democratic Party. The special masters said they did not prioritize protecting incumbents, so some of the new districts have more than one incumbent while other districts are open for new candidates.

In the state Senate, Warren and Shenandoah counties were previously in the 26th district, which was represented by Republican Sen. Mark Obenshain.

The new maps split the 26th district into a 1st and 2nd district.

The 2nd District will include Rockingham, Page, Highland and Bath counties, and parts of Augusta County. Obenshain lives in Rockingham County.

Obenshain said he's disappointed to no longer be representing Warren and Shenandoah counties, but he's looking forward to the new responsibilities with the new district.

"I have an awful lot of friends in those counties that I've loved working with," Obenshain said.

In the House of Delegates, Warren County is currently part of three districts: the 18th, the 29th, and the 15th, which all intertwine in Front Royal and extend to different parts of the county.

The 18th District for the House of Delegates, represented by Republican Michael Webert, would be renumbered the 61st district and move east out of Warren County to include Fauquier and Page counties, as well as northern Culpeper. Webert did not return a request for comment.

The 29th district, currently represented by Republican Bill Wiley, will be renumbered as a new 31st district and cover all of Front Royal and extend into Clarke and Frederick counties, stopping south of Winchester.

"That was a great relationship there, and I had a lot of great support in that neck of the woods," Wiley said of Warren County.

Shenandoah County will continue to be represented by Republican Speaker of the House-designate Todd Gilbert. Gilbert's district will no longer be the 15th but become the 33rd and will now cover the southern half of Warren County, below Front Royal. Gilbert, who lives in Mount Jackson, will also represent Page County, as well as the northern part of Rockingham County.

Stephen Kurtz, acting chairman of the Warren County Republican Committee, said he’s sad to lose the representation of Obenshain and Webert, but excited for the new Senate district centered around Winchester and Frederick County, and the simplicity of two delegates representing Warren County.

Kurtz added the elongated 6th Congressional District will unify the Shenandoah Valley, with Wiley saying a more unified district could help with making improvements to Interstate 81.

The Democratic voters who live Winchester will also be brought into the strongly conservative 6th Congressional District. “It’s good news for us,” Kurtz said.

Shenandoah County Democratic Committee Chairman Brad Skipper said he, too, was excited about the new state Senate district, as an opportunity for his party to garner more Democratic votes out of Winchester. But turning the strong conservative region to Democratic representation, both locally and in the congressional race, will be challenging.

“There’s always a chance,” Skipper said. “I would be remiss if I didn’t say it was going to be an uphill battle. We know our area.”

John Massoud, chairman of the Republican Sixth Congressional District, welcomed the new localities to the district and said the new maps made geographical sense.

Both Kurtz and Skipper said it was too early to say who might run for the new state Senate seat that will represent Shenandoah, Warren, Frederick and Clarke counties. Kurtz said there were early discussions of a candidate for the new 31st House of Delegates district seat but no commitments yet.

The maps take effect in the next general election to be held for each office — 2022 for the congressional seats, 2023 for the state Senate, and 2023 for the House of Delegates, according to the Virginia Public Access Project. There's a chance all 100 delegates would have to run again for their seat this November since a pending lawsuit seeks elections under the new maps.