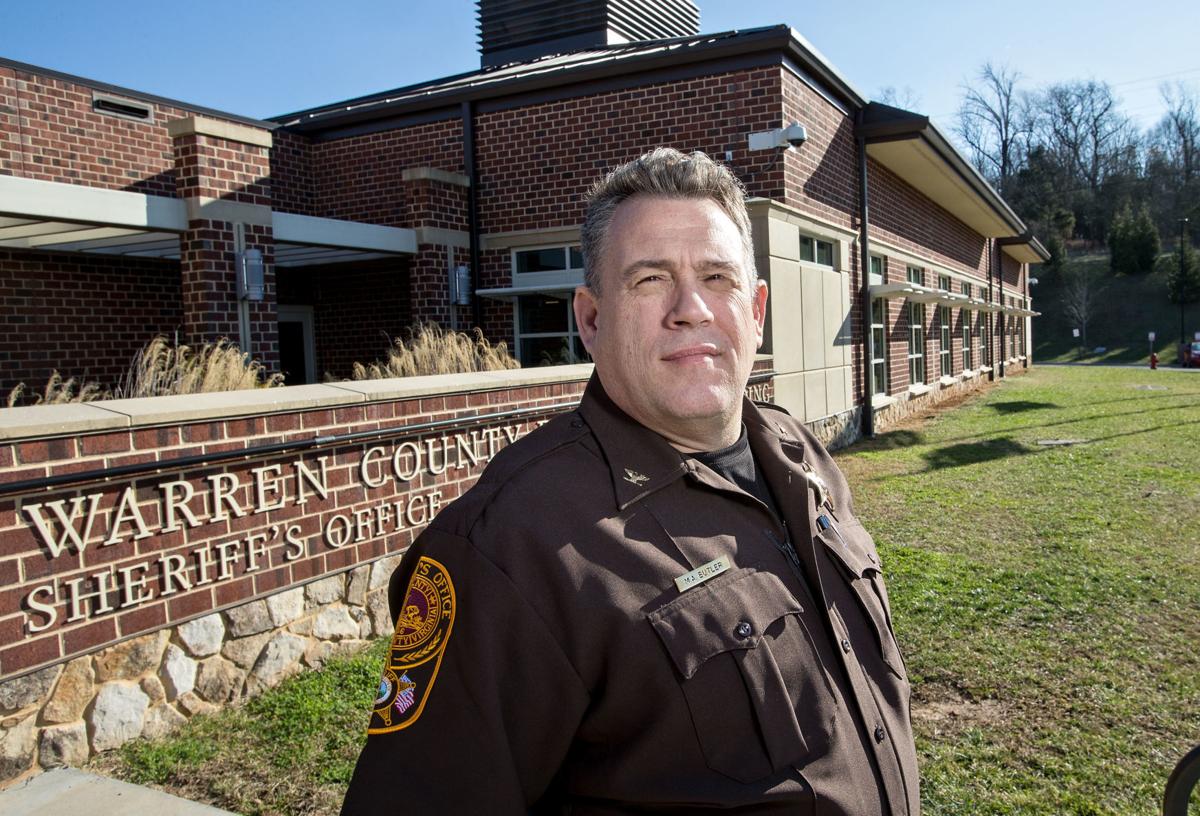 Warren County Sheriff Mark Butler stands outside the county’s public safety building in Front Royal on Thursday. He assumed command of the department on Jan. 1. 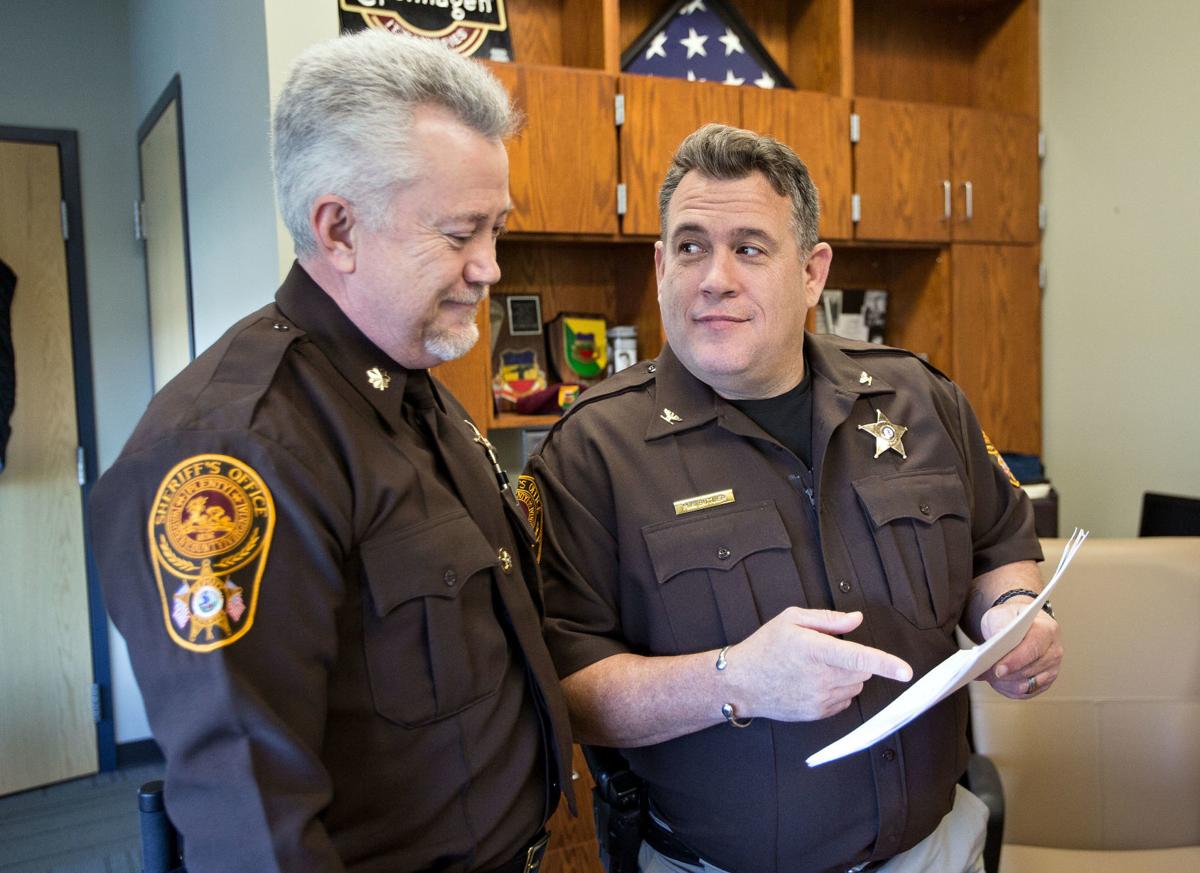 Warren County Sheriff Mark Butler stands outside the county’s public safety building in Front Royal on Thursday. He assumed command of the department on Jan. 1.

FRONT ROYAL — Sheriff Mark Butler, who assumed office Jan. 1, said he wants to leave the department better than he found it.

While he said great challenges lie ahead, the new administration is “setting ourselves up to make great strides for Warren County in the future.”

He noted that although everybody hates change, “I truly believe that if the county gives us the opportunity, they will be happy with the outcome.”

There were immediate changes when Butler became sheriff, as he said 16 employees have left the office. All but two of those positions, a civil processor and administrative role, are filled.

While there are social media “rumor mills” about the departures, he said just four individuals were not asked to come back. He declined to comment on those situations because they are personnel matters, but said: “I just didn’t believe that they were a good fit.”

The rest, he said, left on their own accord.

“I wish the best for all of them, every single one of them,” he said.

Butler added that two employees retired and will work part-time beginning Feb. 1 while another two were sworn in for either part-time or auxiliary positions.

Over three days, Butler said employees were given the opportunity to interview for their position.

Butler dispelled rumors that he dismissed everyone who supported Jason Poe, one of his opponents in the election.

Jeff Holzbauer, the office’s captain of patrol, noted that some of Poe’s supporters have been promoted and “the sheriff is here to protect everyone” regardless of their political leanings.

“And this sheriff is going to make the county safe,” he said.

Butler said “we have lost some really good officers,” but he hopes to replace them with even better employees. For example, he pointed to his second in command Maj. Jeff Driskill, a retired Chicago Police Department officer and Wardensville, West Virginia, police chief who most recently was Chesterfield County’s emergency management officer.

Butler said he is not hiring “yes men” and his command staff will provide checks and balances. He added all officers have been background checked and will be polygraphed.

Regarding future departmental expenditures, Butler said his administration will implement a “zero-based budget,” meaning the process will start from scratch and all expenses will be justified.

Beginning Jan. 1, Butler said the office began “a complete audit of the Sheriff’s Office.” If any “inconsistencies” that “don’t add up” are discovered, he said the office may ask state agencies for an independent audit.

“I want us to fix whatever is out there and I want us to regain the trust of the community,” he said.

On Dec. 19, Butler said while the budget can be handled more efficiently, nothing had been uncovered indicating “that any money is hidden, taken or whatever” and he does not believe any past unethical accounting practices will be discovered.

Holzbauer added that the budget will be scrutinized by an advisory committee composed of citizens, ensuring “full accountability.”

Butler said the administration is seeking savings in any way possible, from studying the vehicle fleet to receiving $15,000 worth of free uniforms form the Arlington Sheriff’s Office.

While savings will be found, Butler noted certain items must be upgraded, including weapons from the Vietnam War.

Butler added that every school now has at least two or more deputies assigned to it as a school resource officer mans every building while all patrol deputies have a school to monitor.

Butler noted that the office previously spent a lot of money on overtime, meaning the office is understaffed, which is an issue with many possible solutions such as retirees working part-time. Butler said part-time officers have no medical coverage, which he will work to change.

Holzbauer noted that “if you can have somebody come out and work 25 or 30 hours a week that have 25 or 30 years of experience and you’re paying a part-time wage, and the only benefit that they need is health insurance to make life good...and you can rely on them and there’s accountability, that’s a good thing.”

Beyond grants, he said accreditation lets citizens know the office is operating above board.

“If your agency is accredited, the county knows and the people know that the doors are opened up and inspected by an independent office that has no ties to anyone inside,” Butler said.

Holzbauer agreed, saying accreditation is “a really big deal” because “it makes the department accountable.”

Butler said his administration will first attempt to receive state accreditation with a goal of achieving national accreditation.

As citizens across Virginia worry the General Assembly is attempting to infringe on their right to bear arms, Butler said he will never support an unconstitutional law.

“I will not infringe on any constitutional right...The people have spoken across our state,” Butler said.

The Board of Supervisors recently dubbed Warren County a “Second Amendment sanctuary,” a title Butler dislikes because it sounds like the community is harboring illegal activity when owning guns is a right.

“The fact of it is, the Second Amendment really should be the First Amendment,” he said.

Butler added that while he supports certain guidelines such as background checks, “I’m not fine with taking anyone’s guns.”

Butler took the reins from former Sheriff Daniel McEathron, who committed suicide after being accused by the Front Royal-Warren County Economic Development Authority of stealing millions of dollars.

Butler, previously a Herndon police officer, had no connection with McEathron’s administration and said: “this is our chance to make things right and regain the county’s trust.”

“Once Trump got in, did you really care about what Obama did? No, there’s no sense to it because that individual’s not there...You might wish that you liked it better,” Butler said.

Holzbauer said Butler’s intentions from day one were to protect citizens and “reassure everyone that the law enforcement was squared away.”

“I can assure you he didn’t do this for the money. He did this because this is his home,” Holzbauer said. “And he wants it to be a good place.”