Timmy Palmer, 11, left, a student at North Fork Middle School in Quicksburg, walks alongside Jay Ross, head custodian at the middle school. Timmy recently choked on a bag of Doritos and Ross came to his rescue by performing the Heimlich maneuver to dislodge his blocked airway. 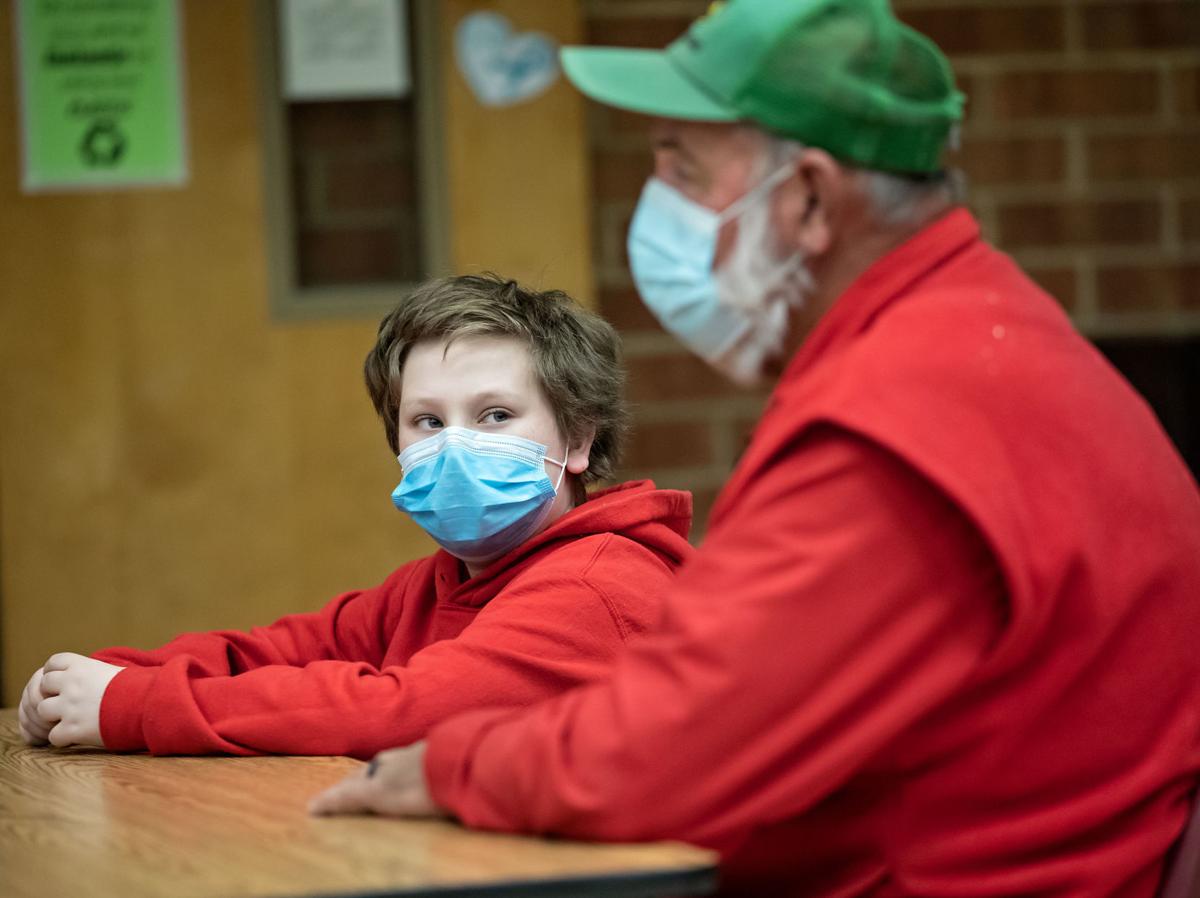 Timmy Palmer, 11, left, a student at North Fork Middle School in Quicksburg, walks alongside Jay Ross, head custodian at the middle school. Timmy recently choked on a bag of Doritos and Ross came to his rescue by performing the Heimlich maneuver to dislodge his blocked airway.

The 11-year old North Fork Middle School sixth grader was choking on his Doritos and needed help during lunch. Luckily for him, North Middle School head custodian Jay Ross was around and helped save his life with the Heimlich maneuver.

"I was just walking through (the cafeteria) doing my check and I happened to see him coming, beating on his chest," Ross said of the October incident. "And I said 'can you breathe?' And he shook his head no. So I just hit him on the back, tried to drive it out, but it didn't work. So I did the Heimlich on him. He turned around, looked up at me and thanked me."

Ross then took him to see the school nurse and Timmy was sent home with his mom.

"I was just shaking on the ride home," Timmy said.

Timmy's mother, Angela Palmer, said the family is very thankful that Ross was there, and she said one of Timmy's friends also helped him get Ross's attention.

"I'm just so glad that (Ross) was there and was able to help Timmy get through that," Angela Palmer said. "We're just so grateful. It seems like such a minor thing to choke on a chip, but we're so glad that Timmy got through that, and he was there. ...The quick thinking and response was just amazing. There's not enough words and not enough gratitude that we can express."

Timmy said that he was eating his Doritos Spicy Sweet Chili chips, his favorite, too fast, which caused him to choke. He said he was terrified.

"In that moment I just saw my life -- and I was grateful for everything," Timmy said.

"I know (Timmy) and his family was just beyond grateful for Mr. Ross' actions," Noonan said. "And that's just the kind of person that he is. Anything anybody needs help with at all, teachers, us, students, he's just always willing to be there and help out. And he did it on the fly and saved someone's life."

Ross said he was worried about hurting Timmy, so he tried not to do the maneuver too hard.

"I did it easy the first time, and I figured if it don't come out then I would do it a little harder," Ross said. "But it popped right out the first time."

Ross said he learned how to perform the Heimlich maneuver about 4 or 5 years ago during a stint with the Conicville Fire Department, where he still serves as vice president.

Ross said it was the first time he had ever used it on anyone.

"Well, there's a first time for everything," Timmy said.

At first, Timmy said he did not want to eat Doritos again, but he now he is eating them again. He said he's learned to eat slowly and carefully.

The incident has also brought Timmy and Ross closer. Ross said they had never spoken to each other before, but now they are friends.

Ross said he has been head custodian for 11 years at North Fork Middle School, after being a custodian at Central High School for four years. He said he loves his job and loves being around the students.

Noonan said the school recognized Ross for his heroics and the Shenandoah County School Board did as well at one of the meetings.

She said Ross has been helpful to the school for years. She said last year he helped the sixth graders with a project to create a new floor plan for the cafeteria, which included social distancing, a practice that the school subsequently adopted.

Noonan said Ross is loved by everyone at the school.

"He's very personable," Noonan said. "All of our staff just love to work with him and talk with him. Not only just as professionals, but to see what they have in common with different connections that they have. So all of our teachers and staff in general they just really have a great relationship with him."