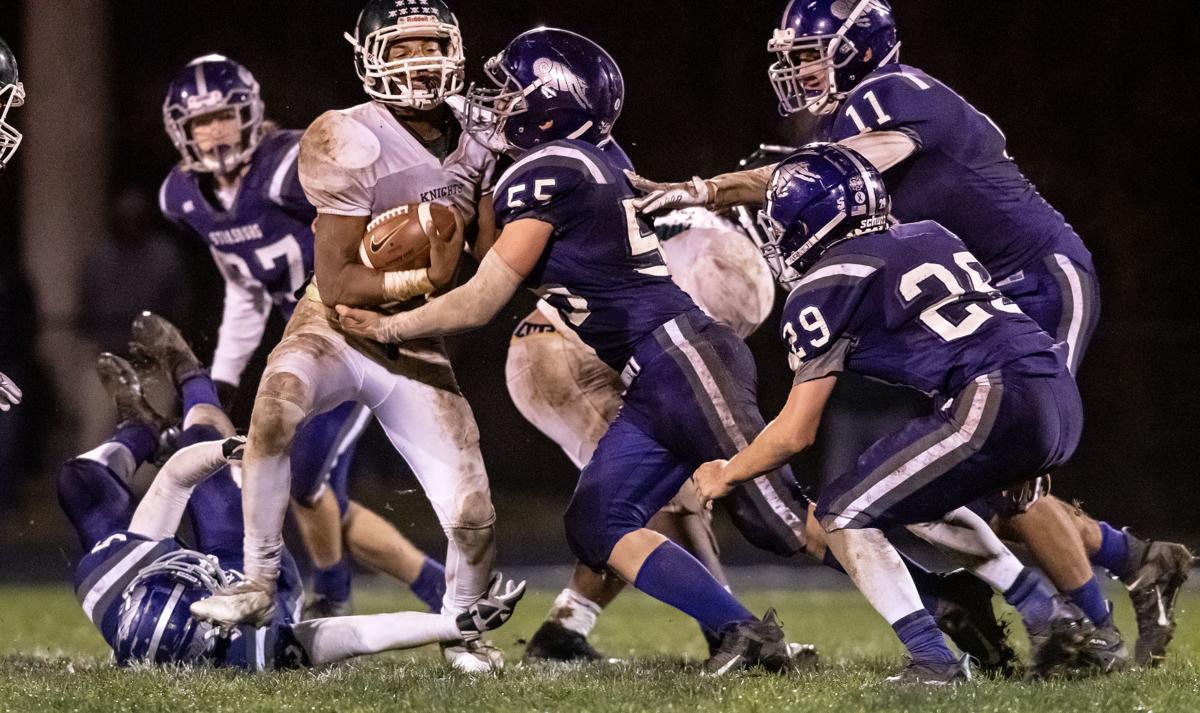 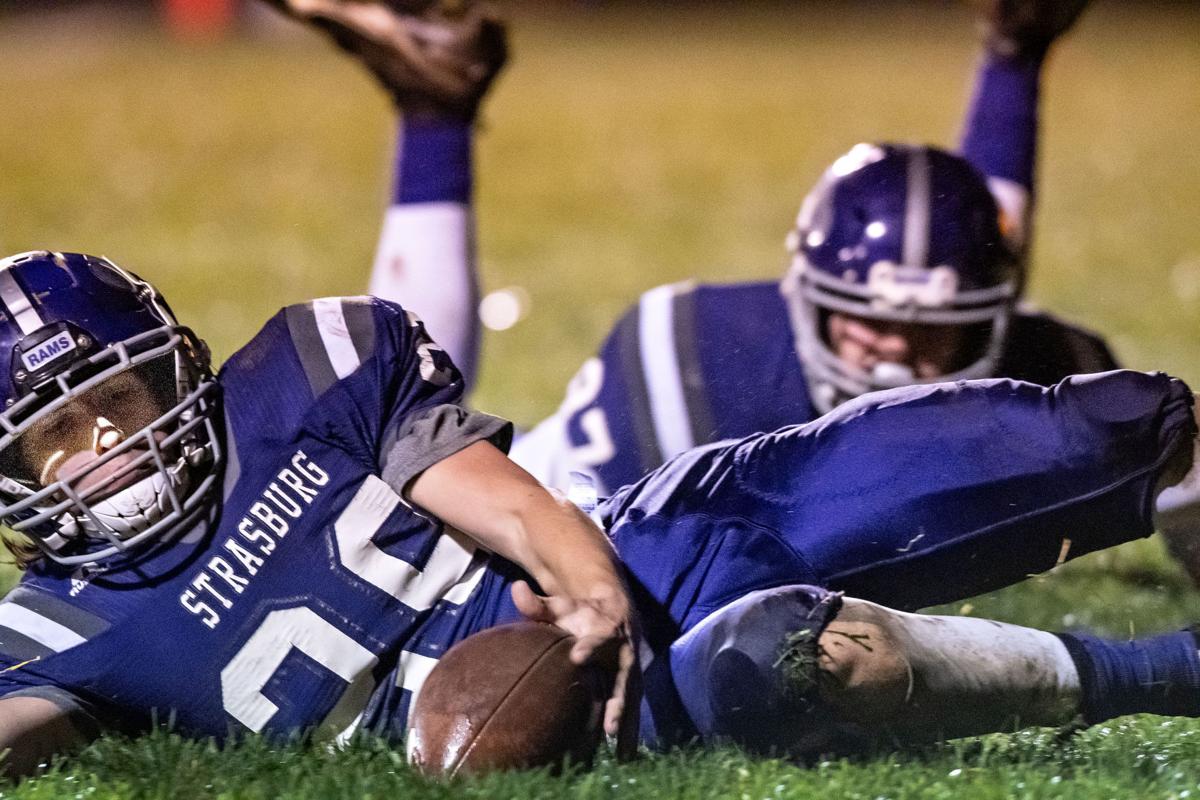 Strasburg’s Tanner Jenkins recovers a blocked punt in the end zone for a touchdown during last week's Region 2B quarterfinal win over Buckingham County.

Strasburg’s Tanner Jenkins recovers a blocked punt in the end zone for a touchdown during last week's Region 2B quarterfinal win over Buckingham County.

STRASBURG — A stout defense carried Strasburg’s football team last spring to its first outright district title in nearly 20 years and to a spot in the Region 2B title game. Tremendous roster turnover between that condensed spring campaign and the fall season created some uncertainty about what that unit would look like this season.

The Rams entered the fall having to replace 10 of 11 starters on each side of the ball, and even Strasburg’s coaches weren’t sure what they had on defense in the early stages of the preseason. In fact, because the Rams lost so much to graduation, Strasburg spent so much time in August getting its young players caught up to speed on the intricacies of its T-formation offense that head coach Mark Roller said at the time that the defense was “a little behind” as a result.

“It was a definite unknown,” Strasburg defensive coordinator Tripp Lamb said this week. “A lot of these kids coming into the year, it wasn’t that we were surprised, it was more of we didn’t know what we were gonna have. A lot of these kids before this year were unproven. They hadn’t played any varsity snaps hardly at all.”

All that defensive unit has done since the season kicked off on Aug. 27 was pick up right where it left off a season ago.

Heading into Friday’s rematch with county rival Central in the Region 2B semifinals, Strasburg is allowing just 9.8 points and 225.5 yards per game. The Rams (9-2) have posted three shutouts, and in three other games they’ve held opponents to a touchdown or less. They have eight sacks and 47 tackles for loss.

And then there are the takeaways. Strasburg has 34 of them in 11 games — an average of just over three per game — including 15 interceptions and 19 fumble recoveries. One of those recoveries set up Jonas Zimmerman’s fourth-quarter, go-ahead field goal in last week’s 22-19 regional quarterfinal win over Buckingham County, capping a wild 16-point comeback that began when the Rams recovered a blocked punt for a touchdown.

“We work as a cohesive unit,” said Rams sophomore linebacker Colby Shaw, who recovered the fumble that led to the go-ahead field goal with 9:39 left. “Our D-line, when they get a good push, we work. And our corners, they’ve been pretty good all year. I don’t know how many interceptions we have this year, but we’ve had plenty of turnovers that we’ve gotten. Those turnovers turn into points on offense. That works well for us.”

The Rams’ knack for creating turnovers is a product of being in the right place at the right time, and that’s by design.

Strasburg doesn’t necessarily emphasize wrenching the football from the grip of opposing ball-carriers, but the Rams do place a premium on swarming to the ball. That means when the football does hit the turf, there’s usually a Strasburg player in position to pounce on it.

“I mean we’ve heard it, to strip it out if you get the chance,” Rams senior linebacker Tanner Jenkins said. “But I think (the takeaways are) just coming with everyone getting to the ball and hitting.”

To hammer home the point of getting all 11 defenders to the football, Lamb said the Rams have a rule in practice that if any player doesn’t get to the football within three seconds, no matter where they are on the field, the entire defense does up-downs.

“Our guys are very opportunistic,” Lamb said. “And they’re in the right spot because they’re hunting the guy with the ball.”

It’s truly been a team approach, too. Fourteen different Rams have been credited with an interception, forced fumble or fumble recovery this season. Seven players have combined for Strasburg’s 15 interceptions (junior safety Ryan Roller leads the area with five), 10 have recovered a fumble (Shaw and sophomore defensive end Griffin Carter each have three recoveries) and junior defensive lineman Omari Holliday has six forced fumbles to go along with a team-high three sacks.

“We have a lot more younger kids than we normally do and they’re stepping up,” said Jenkins, who was Strasburg’s lone returning defensive starter entering the season. “They’re ready for the challenge. They’re taking on everything they can take on.”

The rapid growth of players like Shaw — young guys who entered the season short on varsity playing experience — has been instrumental for the Rams this fall. Shaw saw only sparse action at the varsity level in the spring (he was called up briefly for one game, he said) but was planted right in the heart of Strasburg’s defense as a sophomore this year and leads the team with 105 tackles.

Even Strasburg’s older players were either playing new positions on defense or seeing significant action on that side of the ball for the first time when the fall season kicked off. Jenkins, for example, was an all-state selection by the Virginia High School Coaches Association last spring as a defensive back, but was moved to linebacker this season out of necessity.

“Without that switch of him going from corner to backer, we wouldn’t have won nine games to this point,” Lamb said of Jenkins, who ranks second on the team in tackles with 84. “We wouldn’t have done it without that change. He’s really taken to that and we’re in debt to him for being the way he’s been.”

While Lamb attributes Strasburg’s defensive success to the players buying in and playing hard, multiple players throughout the season have been quick to credit Lamb’s coaching. Shaw called Strasburg’s defensive coordinator a “mastermind,” and Jenkins pointed to Lamb’s ability to break down film and convey the game plan to his players as a major factor.

To the latter point, Lamb said Strasburg’s biggest strength defensively is its ability to get lined up correctly against opposing offenses and not get beat by anything pre-snap, a testament to the Rams’ film study.

Coach Roller said Lamb always finds a way to “maximize the potential” of the Rams at every position and added that Lamb’s energetic personality plays well with his players.

“He’s always juiced up and energized,” Roller said. “Even in practice sometimes he even gets upset at the littlest things. That is his character, his mentality. He’s a go-getter and that is the thing about him, is he wants to be the best and he wants to win every game, and rightfully so. And I think that’s why those guys buy in. He’s young. He’s energetic, enthusiastic and those kids love the energy that he brings every day.”

The next challenge for Lamb and the Rams’ defense is a high-flying Central squad that beat Strasburg 35-7 in the teams’ first meeting in the regular-season finale two weeks ago. Though seven of those points came on a defensive touchdown for the Falcons, the 28 scored by Central’s offense were the most the Rams have allowed all season, and the Falcons seem to be hitting another gear offensively while opening up the passing game in recent weeks.

“They were on their game as far as the passing game goes when we played them,” Lamb said. “It wasn’t unexpected that they would do that or that they could do that, they just kind of got hot. That’s where the hot hand was for them that night and they were able to ride it. It’s definitely a little bit more of a point of emphasis because that’s really what killed us last time.

“I don’t think that game was a good representation of who we think we are and some things we’re able to do,” he added. “We’re definitely glad to have another crack at them and we’ll see how it goes.”